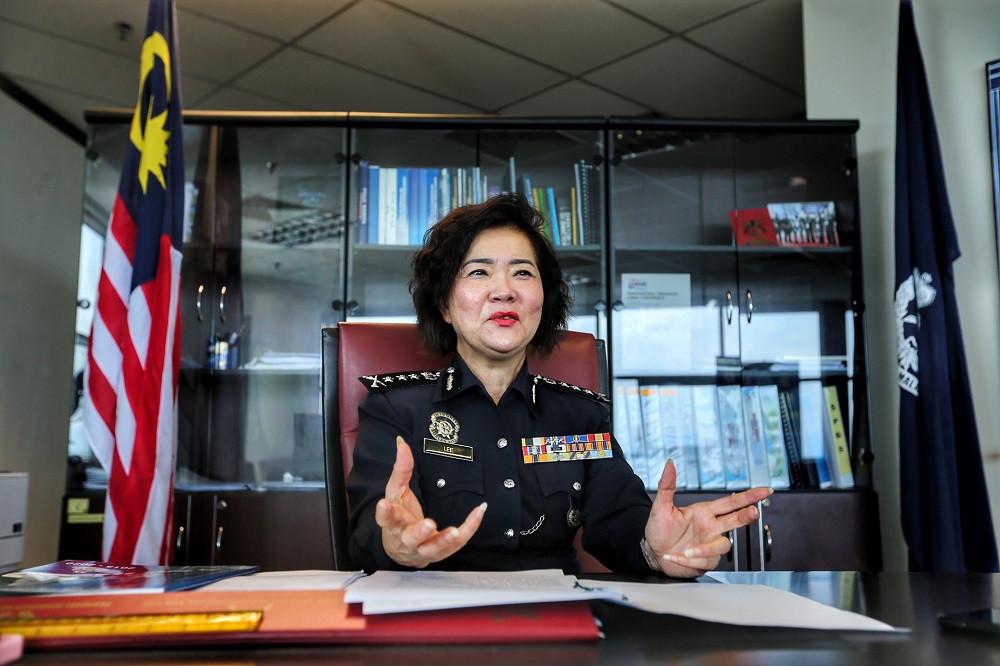 Following on her historical appointment last March, Datuk Dr Lee Bee Phang is the first woman from a Chinese descent to hold the rank of Commissioner of Police (CP) in the Royal Malaysia Police (PDRM). ― Malay Mail photo

That was Datuk Dr Lee Bee Phang when she was younger.

Fast forward many years later and she is the first woman of Chinese descent to hold the rank of Commissioner of Police (CP) in the Royal Malaysia Police (PDRM).

Although she was passionate about joining the force from the very beginning, Lee admitted that her mother was a bit reluctant when she first told her that she wanted to become a policewoman.

“The Chinese community doesn’t encourage their children, especially their daughters to join the police or the army for safety reasons.

“Plus, at that time, I was skinny and timid, so my mother was not on board with my decision.

“Being the youngest child of six siblings also didn’t help my case but in the end, I managed to convince her by telling her that this would be good for our family as we can feel safer in the future,” Lee told Malay Mail.

Besides that, Lee said that she had physical training such as marching and target practices since she was still in university as she had joined the local army reserve.

Her experience of mingling with other races during her army reserve days had also helped her to blend in when she joined PDRM in 1987.

Grateful for her appointment as a CP, Lee now hopes this paves the way for fellow policewomen and leads to more participation from local women.

“Of course, I’m happy and grateful especially to our Inspector General of Police (IGP) Tan Sri Datuk Seri Hamid Bador and to other leaders in PDRM for giving the trust to us women officers.

“It doesn’t matter whether it’s Chinese, Malay or Indian, I think what’s important is they’ve given us recognition to hold high and important ranks in PDRM,” Lee said.

She added that her success was also a team effort.

The Chief Secretariat to the IGP for Research and Development Department also hopes that her appointment will give more chances to local policewomen where they can prove their abilities and get proper recognition in the future.

“We women must also perform; we must show that we’re on par with men.

“Although men might have physical advantages, we women also have our own advantages for example in making policies and in knowledge.

“Policy-making is not an easy task. We have to make sure the input is from various sources, we can’t just refer based on one paper. We need input that is compatible with real-life situations.

“So, I think, women have the advantage and expertise from this aspect,” Lee said adding that it was also important to give opinions using scientific facts rather than emotions.

Sharing one of her achievements during her tenure in the research and development department, Lee admitted that she was proud to spearhead the efforts in enacting the guidelines on autism.

“In Asean, we are the second country to implement this guideline. The first was the Philippines.

“The guideline was enacted for individuals with autism whether they’re a victim, a suspect or a witness.

“Previously, we already had a guideline, but it did not specify persons with autism. The previous guidelines were general.

“As we’re becoming more aware of their situation, it is only right for us to show empathy towards them.”

Aside from that, Lee also calls for more Malaysian women especially the Chinese to be more open when it comes to a career in the PDRM.

“It is an honourable and pure career as you are serving the community.

“Especially now that we’ve loosened up the criteria for non-Bumiputera to join the force.”

Since her appointment as the CP, Lee said she has been receiving support not just from the Chinese community but also from other races.

Lee also said that her elder sister has played a huge role in supporting her throughout her journey while her success was inspired by the previous CP, Datuk Robiah Abdul Ghani who was the first woman in Malaysia to hold the rank of CP in 2008.

Lee is currently working on her autobiography where she is compiling her most memorable experiences and stories during her tenure with PDRM.

The book is expected to be released later this year. — Malay Mail