Friday, August 6
You are at:Home»News»Sabah»Almost half of schools in Sabah are ‘daif’ – Jenifer 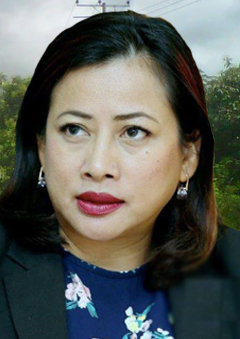 KOTA KINABALU: Warisan has criticised the Federal Minister of Sabah and Sarawak Affairs, Dr Maximus Ongkili whom the party said was spending too much time talking on trivial issues while neglecting more important matters affecting Sabahans.

The former assistant minister of the now defunct State Ministry of Education and Innovation, Jenifer Lasimbang said Ongkili should not waste anymore time on talking about the 17 points or Ligitan but move on and quickly solve the myriad of pressing issues in Sabah.

“Since Ongkili is the Minister of Sabah & Sarawak Affairs, my advice to him is to stop wasting time on such petty issues and to start delivering what Sabah and Sarawak is entitled for when we formed the Federation of Malaysia particularly regarding the sorry conditions of our schools that desperately requires better school facilities and utilities, new furnitures, modern teaching aids, internet connectivity and liveable hostel environment,” she said in a statement on Saturday (April 17).

The former consultant to the Unicef Malaysia and UN Development Programme also said that during her two-year stint as the state assistant minister, her fact-finding missions all over the State unearthed shocking revelation where almost half of the schools in Sabah are categorized as ‘daif’ ().

“Out of the 1,296 schools in Sabah, 589 are classified as ‘daif’ where our schoolchildren have to use water from the wells, rusted roofing causing water leakages when its rain, children having to endure hot condition because of non-functioning fans and worst of all, having to sleep on the floor without beds in inhabitable hostels.

“Based on my decade long experience with Unicef and UNDP, I would readily attest that the sorry conditions of our schools denotes lack of enthusiasm and vigour on the part of both our State and Federal Governments in the past to create a progressive society where our school-children from the rural areas will be given the opportunity to experience upward social mobility.

“Sabahans will forever be indebted to Shafie Apdal, a true believer in education, who immediately established the Ministry of Education and Innovation soon after WarisanPlus came into power in 2018 and he had also been instrumental in securing the allocation of RM100 million in 2019 to repair 24 ‘sekolah daif’ and another RM445 million in 2020 under RMK-11 involving 61 ‘sekolah daif’ after a series of meetings and discussions with the federal ministries and agencies.

“With Shafie being an advocate on education and his conspicuous presence within the Federal Government, Sabah would have been the biggest gainer on education if PH Government was still in power today since we would have secured substantial amount of allocation especially for the repair and upgrading of ‘missions and vernacular’ schools in Sabah and the increment of the District Education Director’s allocation from the existing RM500,000 once the Twelfth Malaysian Plan (RMK12) rolled out and we have yet to take account into the sales tax collected from Petronas and the 40% entitlement which remains as one of the four unsolved points of the MA63.

“So if Ongkili aspires to be a respectable statesman, then he should stop bragging here and there about the 21 Points of MA63 as if he is a novice politician and start to think instead how to reduce Kota Marudu’s 46% poverty rate which is the third highest in Malaysia and also to play a useful role regarding the conditions of our schools,” she said.

Meanwhile, the secretary general of Warisan, Datuk Loretto Padua Jr. reiterated that the party will continue to play its part to ensure Sabahan schoolchildren will receive better standard of education especially regarding school facilities and hostel accommodations.

“We had so many schoolchildren from the rural areas of Sabah who performed exceptionally well in academic, sports and extra curriculum activities and we need to ensure that these schools continue to produce talented students because one day, they will lead the nation in many ways,” he said.

Warisan inherited a very messy State from BN Sabah who grew complacent for having no competitor at all for almost 24 years and that complacency is the reason why they have no urgency or passion to ensure that our schoolchildren received equal standard on school facilities with those at KL.

“It is the role of the Government to prepare an escape route for that student and this route is known as education – hence the reason why Warisan want all our schools in the State to become a wonderful place for our schoolchildren so that they will be interested to come, study and pass their exams resulting in them to have a much better prospect in life than they are now in.

“Warisan will continue to place education as its priority and despite all the mockery made on our decision to establish the State’s Ministry of Education and Innovation, it managed to secure important deals for our schools hence we will re-establish this Ministry if the Sabahans are agreeable to return back the mandate to us.

“The missionaries who faced even greater challenges to provide education to the Sabahans back in the 1900s due to the lack of funds to build proper schools and resistance from parents who preferred their children to help them at the paddy field should become the beacon of light for us that nothing is impossible in the eyes of God and he might even help us as long as our fight is for the right intention,” he said.