Monday, May 10
You are at:Home»Features»Keeping their passion alive 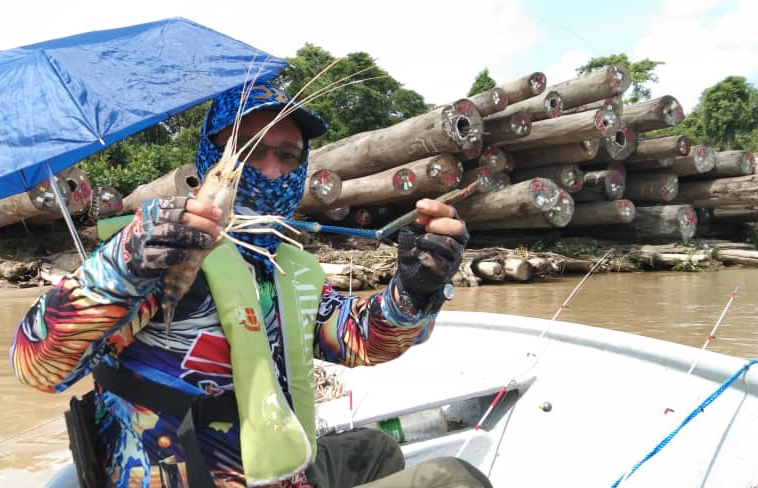 Norhadie shows a freshwater prawn, hooked during a fishing trip in Kuala Baram.

THERE maybe some of us who feel that fishing is a hobby that is too relaxing or too boring; after all, one does not do much apart from just sitting and waiting for the catch.

But for the hardcore enthusiasts, the activity is beyond fulfilling – it can be quite an adrenaline rush, especially when the catch is abundant.

For Mohamad Norhadie Sahari, 39, it is a way to relieve the stress from work and also from his daily life.

He and with his gang of avid anglers have been trying out spots across Miri Division that are known to be anglers’ havens – from Kuala Baram down to Niah.

The craze for them now is freshwater-prawn fishing – they would go out for two trips weekly to satisfy this latest addiction, but only when the weather is nice and sunny.

According to Norhadie, the hot season is the best time for freshwater-prawn fishing.
Scientifically known as Macrobrachium rosenbergii, this local crustacean species thrives during this particular spell.

“The best time is just before padi-harvesting. When you see the padi stalks bending in the fields, that’s the time when these giant freshwater prawns come in abundance in nearby rivers.

“For avid anglers like us, this is the most-awaited time,” he told thesundaypost.

Moreover, this particular season – usually from March up until July – would also haul in tons of ‘bubuk’ (krill shrimps) from the sea.

“So we, the anglers, are not the only ones looking forward to this season. The fishermen also get to make extra bucks from it as well,” said Norhadie. 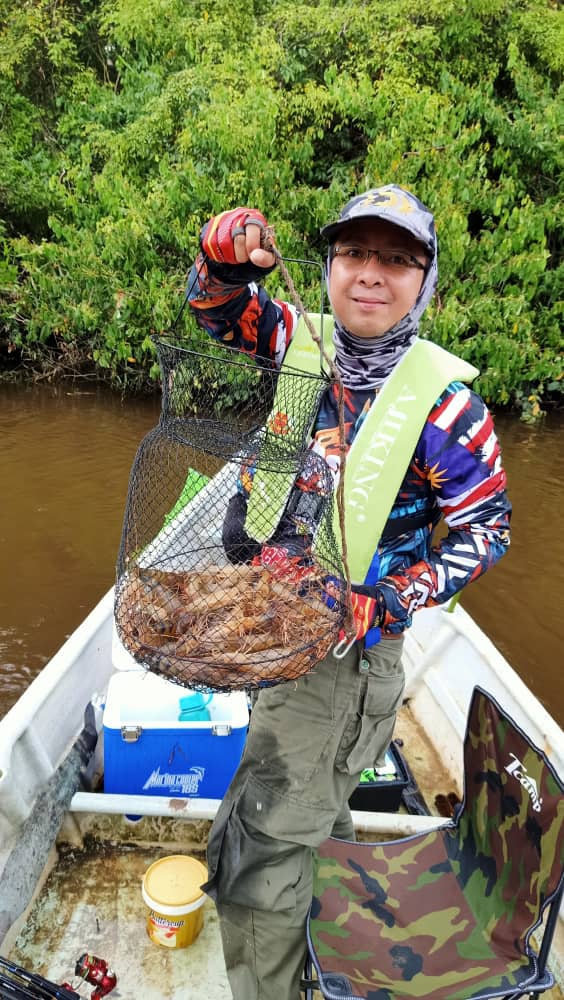 Norhadie says he never returns from any fishing trip empty-handed.

He said his fishing trips would take place during the weekends, and he would normally spend about 12 hours per trip.

One of his and his gang’s favourite spots for prawn-fishing is in Niah, located over 70km from Miri City.

“I would leave the house at around 4.30am to meet up with my gang before heading to Niah. Usually, there would be at least two of us in a group.

“Once we get there, we would get all our equipment ready and after that, we would board our chartered boat – we usually get ready by 6am,” he said.

According to Norhadie, 6am is the best time to start fishing because that is when the prawns start feeding, and would continue feeding until afternoon.

“By then, the weather can be scorching hot, but maybe because I’m doing something I love that the heat doesn’t bother me too much.

“For every trip, we would bring along food because we would remain on our boat until it’s time to leave for home – usually in the evening.”

Norhadie said the villagers in the area would rent out boats at a rate of about RM120 per unit, depending on the boat’s capacity.

He said he and his gang would each contribute to the payment.

“Upon finding a good spot, we would spend a few hours there, before moving on to the next – we do not normally stay in one spot for too long.

“There would also be other groups of anglers in the area, but we would do our best to keep our distance from them.

“But one thing about this community of anglers – we always look out for one another.

“If we encountered anything dangerous or if something was not right, like a floating timber or even crocodiles, we would alert one another.”

Norhadie said their prawn-fishing session could last up to 12 hours but on the bright side, never had he and his buddies come home empty-handed.

“At times, we don’t get much prawns – but never empty-handed.

“There were times when I took home up to 3kg of these ‘jenggo’,” he said, clarifying that ‘jenggo’ is a slang among local anglers that refers to these giant freshwater prawns.

He said the most exciting part was when either the fishing rod began to hook in one prawn after another, or he got into a tug-of-war with a big catch.

“When the catch is heavy, you need to know how to properly reel it in. You can feel your adrenaline rush as you struggle to land your catch – it’s exhilarating; the end result is always satisfying.

“Not only are you struggling to keep your composure while reeling in your catch, you also don’t want to lose your fishing gears to the river. Some of these fishing rods are very expensive,” he said.

Norhadie said he had spent over RM1,000 for tackles – some of his fishing rods cost more than RM200 each.

Unlike normal fishing, prawn-fishing would involve up to eight fishing rods at one time to maximise the number of catch.

Coming with the territory

Norhadie said for seasoned anglers, fishing in the river was more than just an outing
on a boat – there was a few things that they must keep in mind.

“You must not say negative things while fishing in the river, and always be aware of your surroundings.

“We must always remember that we’re not the only ones there; therefore, we must respect our environment.

“When prawns are plenty in a particular spot, it also means that there are crocodiles around – the prawns are their food as well. So if we bump into any crocodile in that area, it’s time to leave and look for a new spot along the river,” he said.

Norhadie claimed that they once saw a crocodile the size of a ‘Perodua Alza’ during a freshwater-prawn trip in Niah.

“There had been a few times when a crocodile would slowly inch its way towards us while we’re busy reeling in one catch after another. We had to leave for a different spot immediately.

“One time we saw a group of anglers, (who) sounded like Indonesians, on another boat – singing loudly to scare away a crocodile that was nearby.

“Though it was a rather funny scene, we would rather not take any risk. It’s better to just leave the area and find a new spot,” he reminisced.

Norhadie has always loved fishing since he was just a young boy.

It did, however, slow down for a while as he reached adulthood.

This father-of-one now spends a lot of his free weekends fishing with his fellow anglers.

“My wife knows that I love fishing, and she has been very supportive of this hobby. She has no problem with my 12-hour prawn-fishing trips because she, too, loves freshwater prawns.

“This works just fine for me – I get to spend time doing my favourite activity and at the end of the day, I bring home freshwater prawns for dinner,” he smiled.

Just-caught freshwater prawns could fetch a market price of RM80 or even up to RM90 per kilogramme, but Norhadie said all his catch would be for his own consumption. 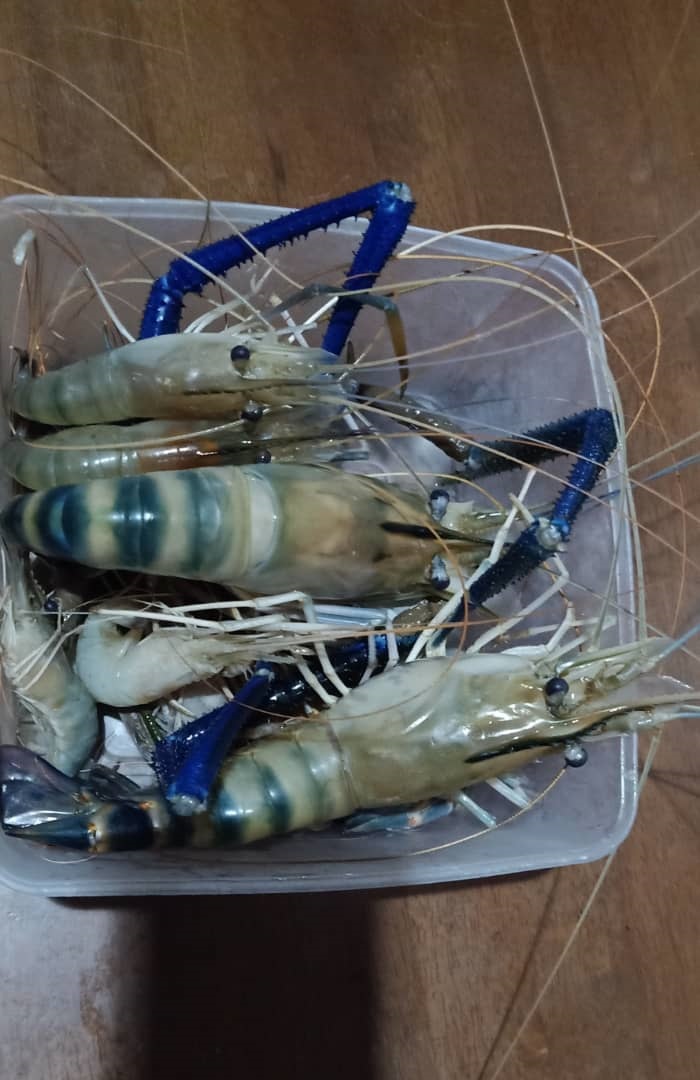 Just-caught freshwater prawns can fetch a market price of up to RM90 per kilogramme.

“Sometimes, there are ‘towkays’ (businessmen) already waiting by the river as we arrive – they want to buy our catch, but we won’t sell it to them.

“But there are other groups who will sell their catch to the ‘towkays’. For them, prawn-fishing is able to generate some side incomes because of the hefty price of the freshwater prawns.” 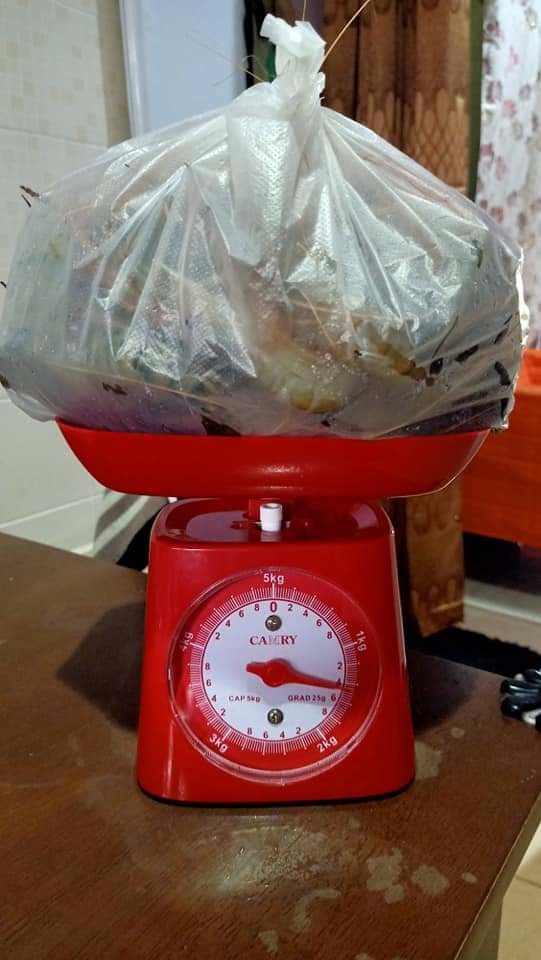 Norhadie says no catch, even one weighing over 1kg, is for sale – his family loves freshwater prawns.

During this Ramadan season, Norhadie would be taking a break.

“Freshwater prawns are actually available all-year round, but they are most abundant just before padi-harvesting – making it the season most anticipated by anglers and fishermen alike,” he said.