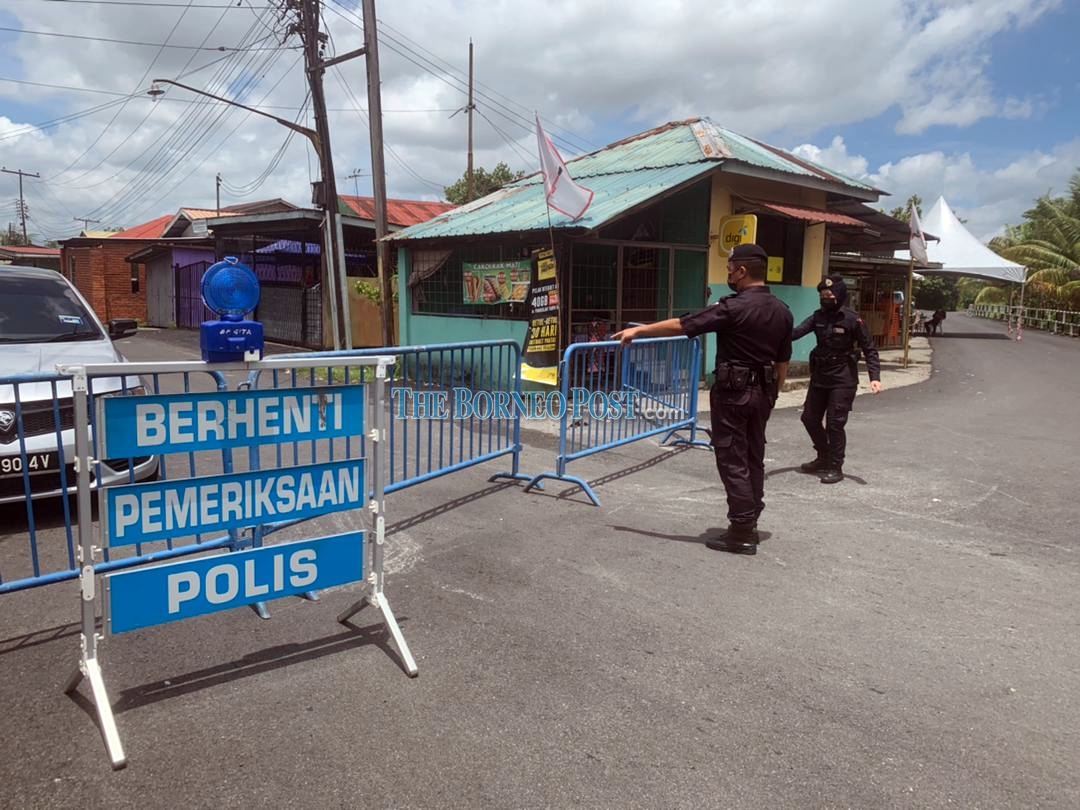 Police personnel manning a roadblock around a village which had been placed under lockdown in Sarawak to curb the spread of Covid-19. – File photo

KUCHING (April 19): Half of the 40 districts in Sarawak are now Covid-19 red zones with the inclusion of Sri Aman and Bukit Mabong districts today.

Sri Aman and Bukit Mabong turned from orange to red after it recorded 50 and 44 locally transmitted cases respectively in the last 14 days, the State Disaster Management Committee (SDMC) said in its Covid-19 update.

“This increased the number of districts with red status in the state to 20,” it said.

The Health Ministry categorises districts with no cases as green zones, those with one to 20 cases over a two-week period as yellow zones, 21 to 40 cases as orange zones and 41 and above as red zones.

SDMC also said Tatau district had changed from Yellow to Orange status today after recording a total of 33 locally transmitted cases in the last 14 days.

The number of ‘orange’ districts is now five. The others are Betong, Asajaya, Sebauh and Marudi.

Four districts in the state remain green. They are Lawas, Telang Usan, Lundu and Simunjan.

Meanwhile, SDMC said the state Health Department had declared that the Sungai Bakong Cluster in Meradong had ended as it had not reported any new cases in the last 28 days.

“The total number of clusters that remain active in Sarawak is 49. Of these active clusters, 12 of them recorded a total of 153 new cases while the remaining 37 clusters had no new infections,” it said.

On enforcement, SDMC said the police had issued a total of 13 compound notices to individuals who flouted the standard operating procedures (SOP).

Of the total, 11 notices were issued in Miri and the other two in Samarahan.

“This brings the cumulative number of compound notices issued since March 18 last year to 5,892,” it said.