Saturday, May 8
You are at:Home»News»Sarawak»Family of missing diver Karen Chong worried about her safety 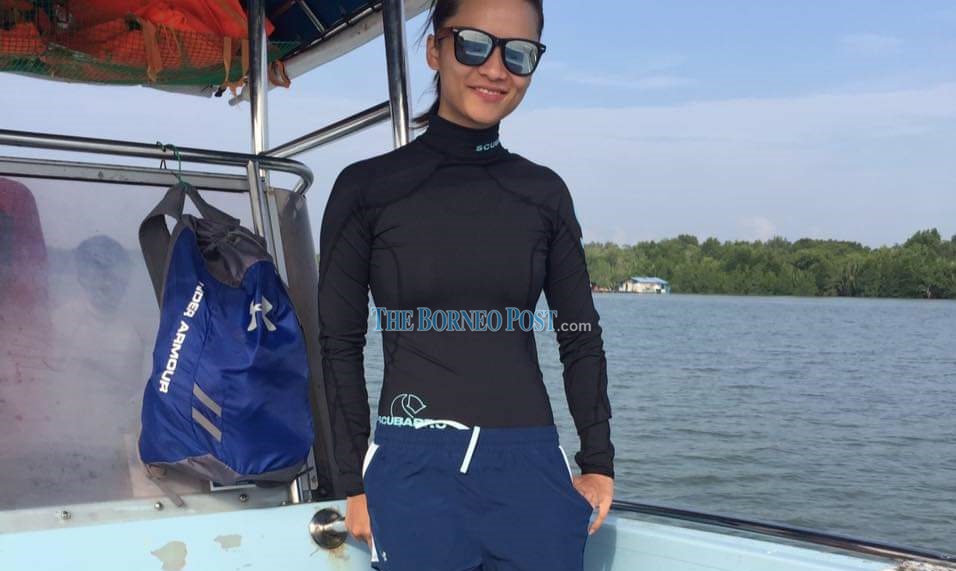 Karen seen during one of her past dives. – Photo courtesy of Brandon Chong

KUCHING (April 19): The family of Karen Chong who went missing in Satang Island near here last Saturday is extremely worried about the diver’s safety and has engaged several own search and rescue (SAR) initiatives to complement the official SAR efforts by the state Malaysian Maritime Enforcement Agency (MMEA).

According to Karen’s brother, Brandon, the family has exhausted every possible means to conduct the SAR and is very disappointed that the authorities seem to have been dragging their feet.

Speaking to The Borneo Post, he said he found it hard to believe that the MMEA told him that the SAR operation could wait while his sister is floating in the sea waiting to be rescued.

He said while he tried to understand that the authorities have their standard operating procedures (SOP) to follow, he could not help worrying about Karen’s safety.

“My sister’s last dive was at 4.20pm last Saturday. She was supposed to emerge in 20 to 30 minutes but this did not happen. So her diver friends started searching for her after realising that something could have gone wrong.

“Her diver friends heard some whistling during the initial search but couldn’t be sure it was my sister. I was informed of her disappearance at around 7pm,” he said.

Brandon said he immediately sought help from family and friends on how to rescue his sister.

He said a diving shop operator advised him to seek help from MMEA since it was under the agency’s jurisdiction.

“I was provided with a number to call. But after over 10 unanswered calls, I turned to dial 999, which connected me to some emergency department in Putrajaya. I was told to leave my contact and that MMEA would call me back.”

He said several authorities including the Civil Defence Department (APM) had contacted him after that, but not MMEA.

Not giving up, he said he kept on calling the MMEA number again. Fortunately, after an hour or so, MMEA got back to him.

“I told MMEA that I need their help to search and rescue my sister. But they told me they had a boat parked in Lundu but that was without any fuel. They also told me that they could start SAR operation only 7am the next day (Sunday).

“My sister is missing and waiting to be rescued, shouldn’t MMEA conduct their SAR operation immediately? But they told me they needed to wait for Bomba and police.

“By then I knew they wouldn’t be able to help me search for my sister, so I asked my friends to help. We went out to the sea to search for my sister even up till midnight but due to the unpromising weather, we had to turn back to land. The next day, our own SAR initiative went on but MMEA’s did not,” he recalled.

Brandon said the MMEA said the SAR operation would start at 7am but this was not the case. Only the police engaged some SAR efforts at around 9am on Sunday.

He said the MMEA called him at around 11am and told him to meet them at the Telaga Air jetty later.

Brandon said what riled him up was that the boat which was supposed to ferry the MMEA divers was still out of fuel as he arrived at the jetty.

“They told me a family representative needed to be with the SAR team, so I went. They told me they needed the exact location, but the thing is I already sent them the coordinates earlier. I would be more grateful if they had conducted the SAR operation before the press conference.

According to Brandon, the MMEA SAR operation ceased at 6pm on Sunday.

He said he was dumbfounded that the the MMEA SAR team told him that they were clocking out at 6pm.

“I was with them from 2pm to 6pm. When they told me the SAR operation ended at 6pm, I thought to myself ‘How could they stop the SAR effort when my sister is still not found?’ But they did stop the operation at 6pm.

“I even suggested they use (heli)copter but they told me air search would be launched only on the second day. Mind you, the so-called second day is the second day they started the SAR operation, which is today (Monday) and my sister has gone missing for the third day,” he pointed out.

He said the family managed to engage an air search for Karen on Sunday but to no avail.

“I did not complain for the sake of complaining, my sister is waiting to be rescued. The way that the authorities are doing seems (to be) like doing a research rather than a rescue.

“If that’s really the way that the authorities are conducting their SAR operation, I’d say it’s time for them to tighten their SOP because this is a matter of life and death,” he added.

Brandon made it crystal clear that he was not trying to make things difficult for the authorities but it concerned his sister’s safety.

“I am grateful for the authorities’ help and I know they are trying. I am not a negative person but the actions of the authorities are lacking. Any family of a victim would not appreciate such ‘slow motion’ SAR efforts,” he said.

On Sunday, state MMEA deputy director of Operations Capt Yousry Yaali said the Maritime Rescue Sub Centre (MRCS) Kuching was notified of the incident at around 8pm by the Bomba operations centre through MERS 999.

He said MRSC Kuching activated an SAR operation at around 9am on Saturday and Sunday, and established a front base centre at Telaga Air Jetty at 8am Sunday, adding that the missing 31-year-old is a qualified diver.