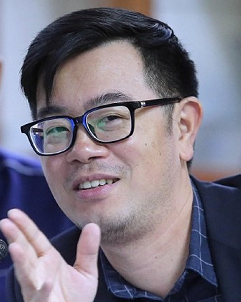 Tanjung Aru assemblyman Datuk Junz Wong said on Tuesday that the controversial project’s revival came as a shock, as the public was never consulted or engaged.

“After only one courtesy call by foreign developers, the Chief Minister announced that the controversial project will be revived.

“This is shocking. GRS never consulted the public. There are no details, but more confusion and questions,” he said in a statement.

Elaborating further, Junz said he is not against development, but it must not be at the expense of public and environmental interests.

“Let me be unequivocally clear. I am not against development. Development brings economic benefits, but it also brings along negative impacts.

“That is why public consultations must be held, in order for the pros and cons be weighed, and concerns be addressed.”

Junz added that unlike the Barisan Nasional (BN), the previous Warisan administration put to a halt the TAED project between 2018 to 2020, pending the fulfilment of certain requirements in order to safeguard the interests of Sabahans.

“If you recall, TAED was started by the Barisan Nasional administration. Despite public protests and objections, the initial approvals were bulldozed through.

“After BN’s collapse in 2018, the project was put to a halt by Warisan.

“For more than two years, TAED was a no go.

“The reason was simple.

“Warisan is all for development. But pre-requisites and requirements were set, in order to protect and safeguard Sabahans’ rights and interests.

“For example, public ownership of the beach cannot be compromised.

“The public must be able to continue to enjoy the use of the beach as a public space.

“Secondly, economic benefits must be guaranteed.

“At the construction stage, developers must use local workers and not the so-called Chinese experts.

Upon completion, there has to be things like hawker centre for the benefit of local traders.

“These are steps to ensure local Sabahans feel the positive economic impact. We do not want a situation where Sabahans can only see mega projects but cannot feel the economic benefits.

“Thirdly, top soil for reclamation works must not be taken from nearby areas which are prone to landslide and erosion.

“We are talking about reclaiming big areas of the sea. So we do not want a situation where Tanjung Aru is reclaimed and developed, yet other parts like Penampang or Tuaran become negatively impacted with more floods.

“Fourthly, the project cannot be guaranteed by the government.

“This is to avoid the state coffers being impacted, should the project cost be bloated or declared fail in future.

“We do not want irresponsible developers to come in with some grand ideas, then declare it as a failed project one day because they know that the government is there to guarantee it.

“When that happens, Sabahan taxpayers will have to pay hundreds of millions due to errors and failures of GRS and its developers. Money that could be used for welfare, ends up being used to rectify mistakes of irresponsible leaders.

“These are just some examples of the requirements set by the Warisan administration upon receiving public feedback,” he said.

Junz added these requirements could not be fulfilled by interested developers, hence the project was put to a halt.

“If, say, a developer came forward and said they could develop Tanjung Aru into an international world class tourism hotspot, without taking away public ownership of the beach, and at the same time fulfill other requirements, that will be the best.

“Sabah gets a world class tourism spot. Sabahans at the same time are guaranteed its benefits. What is there to object?

“But if investors just want to make money, and then neglect the rights and interests of Sabahans, why should we allow them to do so?

“It was unfortunate that during the Warisan era, we found out that most developers wanted ownership of the beach. They also want to use foreign labour and wanted a government guarantee.

“All these in Warisan’s opinion, do not bring benefit to Sabahans. It may even bring more disadvantages to Sabahans.

“So the project was not revived.

“Nothing is being built in the proposed TAED site. Even the fences are not erected because there was no approval from the Warisan administration.

“Since there was no intention to revive TAED, we brought back the hawkers who were previously chased away by BN.

“Remember BN chased the Tanjung Aru hawkers to Tanjung Lipat in order to make way for TAED? It was Warisan who fought for the livelihoods of these hawkers and brought them back.

“Now, if you go to Tanjung Aru Beach over the weekends, the situation is returning back to normal, just like the olden days where you could get your keropok lekor, corn in cup, fruit juice and watch the sunset.

“It was Warisan’s works for the people of Sabah.

“But will Sabahans be able to continue doing so under the current GRS administration?”

Previous ArticleCovid-19: Sarawak records 600 new cases, one fatality in Sarikei
Next Article Dutch Court will not deliver verdict on defendants in MH17 cases in 2021 – judge