Saturday, May 15
You are at:Home»News»Sabah»Discarded durian seeds a money spinner for Sabah businessman 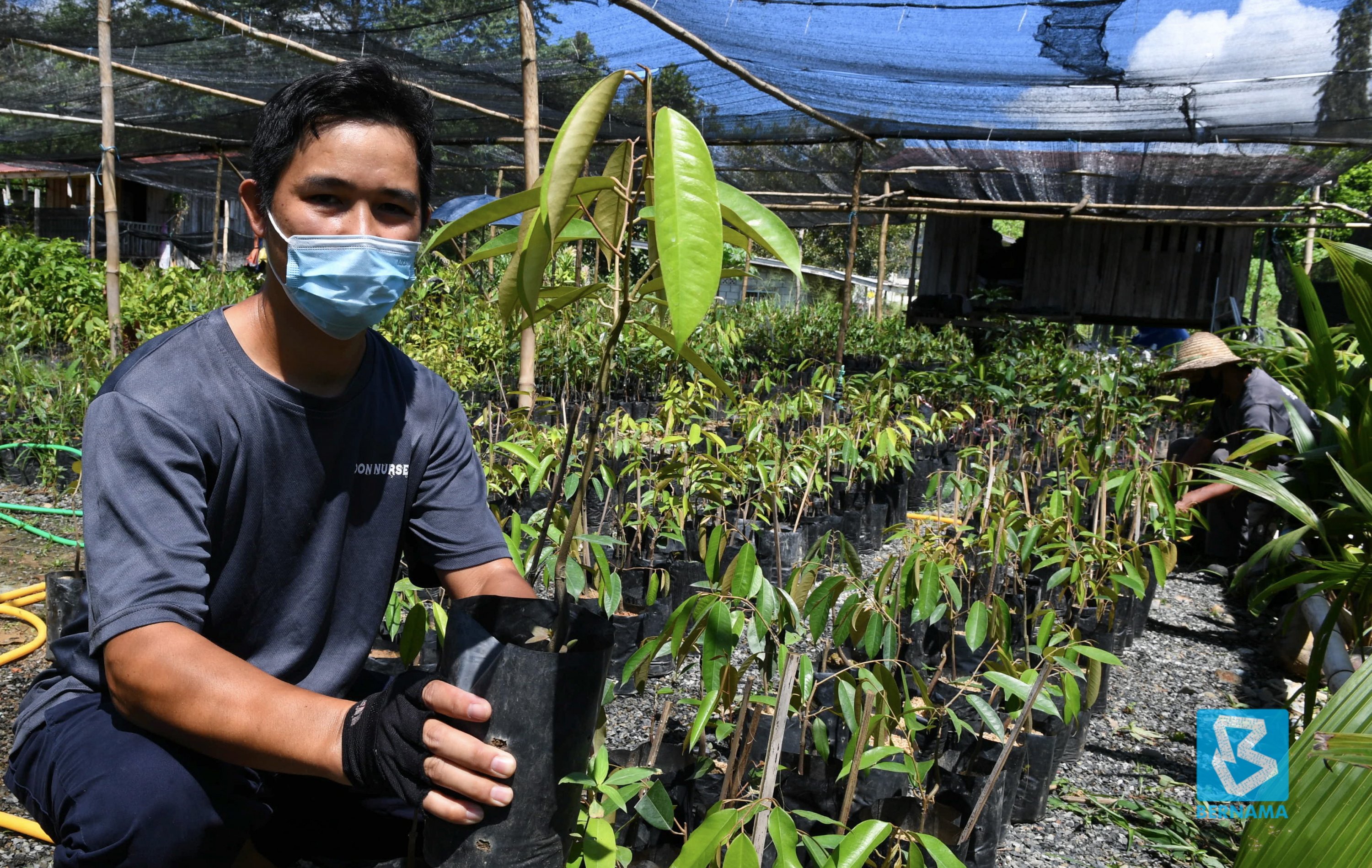 Donny shows one of his musang king saplings. — Bernama photo

KOTA BELUD (April 20): The idiom ‘One man’s trash is another man’s treasure’ holds true for Donny Ien who runs a lucrative enterprise propagating high-value durian species using the discarded seeds of the king of fruits.

During the fruit season between July and December when durians are plentiful, he buys the seeds at about RM3 to RM4 per kg from durian stallholders who collect the seeds after their customers have relished the flesh of the thorny delight.

He then sows the seeds in his nursery to produce rootstock, after which selected premium durian species such as musang king, tembaga, and D24 are bud-grafted onto them.

Donny, 39, who has been operating his nursery called Don’s Nursery at his village in Kampung Rangalau, here, since 2017, said the idea of starting his own durian nursery came about some eight years ago when he was working in Penang.

“I saw a lot of potential in durian cultivation because in Penang then, each musang king fruit was priced at up to RM100 a kilogram,” he told Bernama, adding that he and his wife later returned to Sabah to learn how to propagate durian.

“We had to learn from scratch… I also learned from a friend of mine who has experience producing bud-grafted durian.” 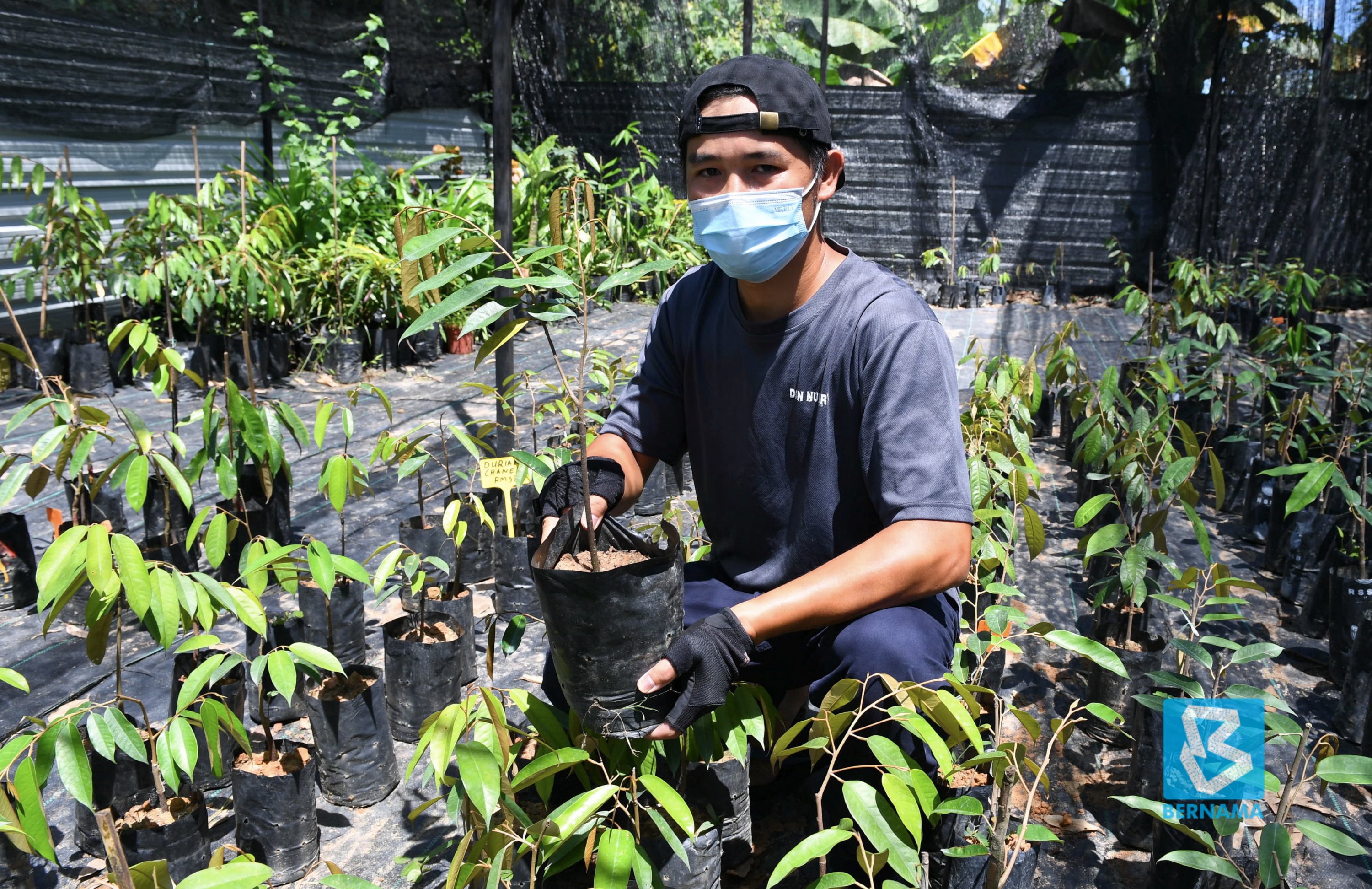 Donny has long-term plans to become a wholesaler for musang king saplings.

Explaining the bud-grafting process at his nursery, located on a three-quarter acre plot of leased land overlooking the majestic Mount Kinabalu, Donny said the durian seeds are soaked in water overnight before they are sown in plastic polybags filled with a mixture of yellow and black soil.

Once the rootstock (which refers to the original plant onto which another variety is grafted) grows to a height of half a metre in a month’s time, it is ready for bud-grafting.

To produce a bud-grafted musang king durian tree, a bud from an original musang king tree will be grafted onto the rootstock using a special tape.

Donny, who gets his stock of musang king buds from his aunt’s orchard nearby, said the bud-grafting process, which takes about 21 days to complete, has to be done carefully to ensure its success.

“During the process, the bud itself should not be covered but the area where the grafting is done has to be covered properly to prevent water from seeping in when watering the plant,” said the father of two.

After the 21-day period, the tape has to be removed to enable the bud to grow until it becomes a full-blown tree in four or five years.

Besides bud-grafting, Donny also uses the wedge grafting technique which, he said, enables the grafted plant to grow faster. He is able to graft between 200 and 300 plants a day with the help of his three workers.

In the early days of experimenting with bud-grafting, Donny met with failure but he did not allow that to dampen his spirits. He kept going until he succeeded and today, he is earning up to RM20,000 a month from his nursery business.

The durian saplings are ready for sale when they are three to four months old with the musang king species, for instance, fetching prices of between RM38 and RM150 each depending on the size.

Donny’s customers are mainly from Kota Belud and Tawau. He also has customers in other districts but due to the current ban on inter-district travel in Sabah, he sends the saplings to them via postal service.

To meet the demand for durian saplings, he also procures small-sized durian plants from Pasir Mas in Kelantan at RM10 each.

At his nursery, Donny also cultivates the dalit durian, which has orange-coloured pulp, and durian bunga merah species which is popular in Sabah, as well as fruits such as pulasan and mangosteen and even avocado and pandan coconut.

Keeping pests such as grasshoppers and snails, and diseases like leaf blight at bay are among the challenges he has to contend with. He has no choice but to use the appropriate pesticides to get rid of the pests because the nursery is his main source of revenue.

Donny, who also conducts courses in Kota Belud and Ranau on durian propagation, also has long-term plans to become a wholesaler for musang king saplings.

He is also currently the editor of a monthly online magazine called ‘Penjana Hijau’ which carries articles on agricultural activities pursued by local youths in Sabah. — Bernama