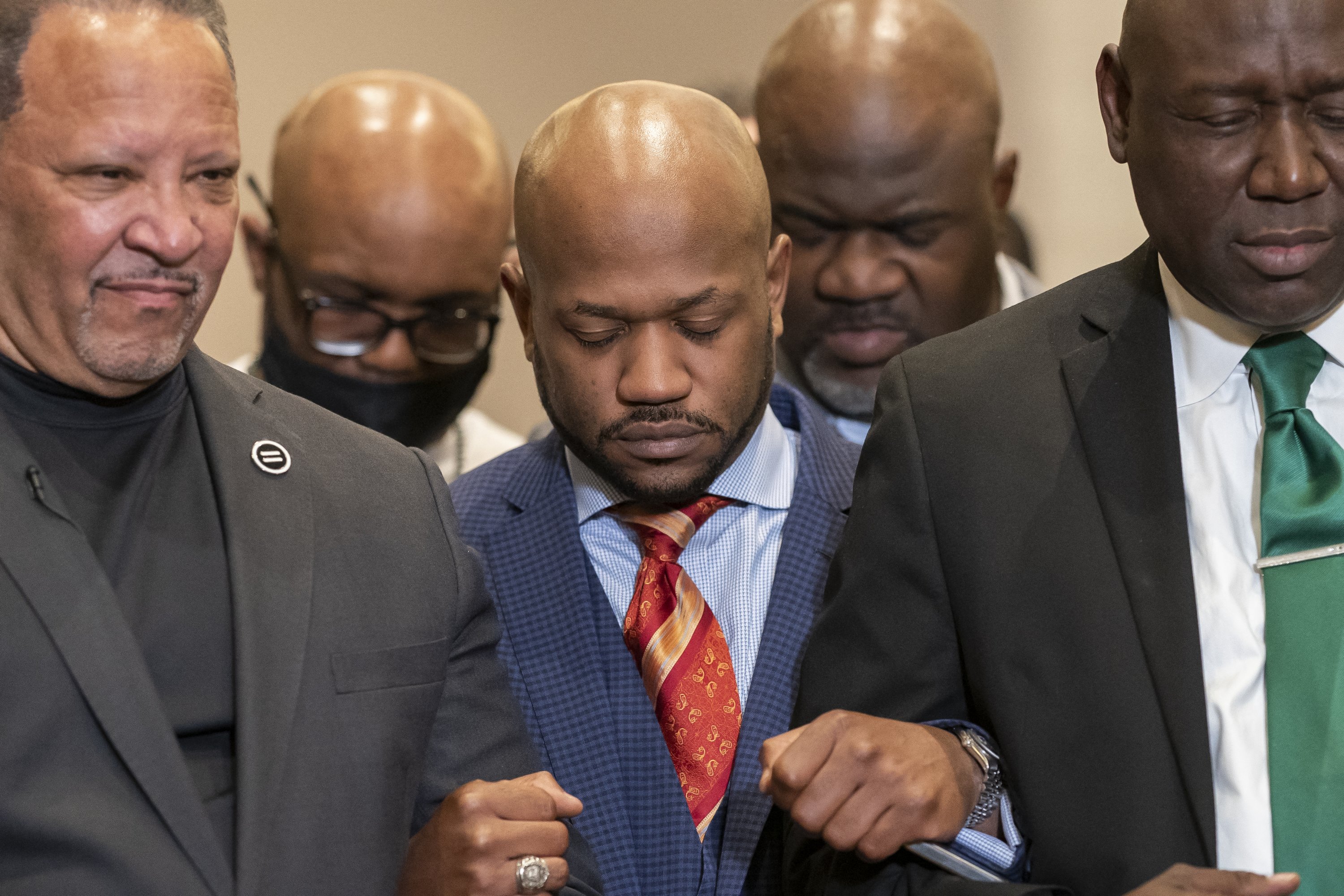 Family members and attorneys pray during a news conference following the verdict in the Derek Chauvin trial on April 19, 2021 in Minneapolis, Minnesota. — AFP photo

The jury deliberated less than 11 hours before finding 45-year-old Chauvin guilty of all three charges against him: second-degree murder, third-degree murder, and manslaughter.

A crowd gathered outside the heavily guarded downtown Minneapolis courtroom erupted in cheers, and some wept tears of relief, when the verdicts were announced after a three-week trial that had an entire nation on edge.

Chauvin, who had been free on bail, was put in handcuffs after Hennepin County Judge Peter Cahill read out the unanimous verdicts reached by the racially diverse, seven-woman five-man jury.

Wearing a face mask and displaying no visible emotion, Chauvin was escorted out of the courtroom by a deputy as one of Floyd’s brothers, Philonise Floyd, embraced prosecutors.

Chauvin faces up to 40 years in prison on the most serious charge — second-degree murder. Sentencing will be at a later date.

The 19-year veteran of the Minneapolis police force, was seen on video kneeling on the neck of Floyd for more than nine minutes as he lay facedown and handcuffed on the ground saying repeatedly, “I can’t breathe.”

The 46-year-old Floyd’s death during his May 25, 2020 arrest for allegedly passing a counterfeit $20 bill sparked protests against racial injustice and police brutality around the world.

Ahead of the verdict, cities across the United States had been braced for potential unrest and National Guard troops have been deployed in Minneapolis.

But when the conviction came, Philonise Floyd spoke for many when he told AFP, “today, we are able to breathe again.”

President Joe Biden called members of the Floyd family to say he was “relieved” by the verdicts, then later he and Vice President Kamala Harris addressed the nation in televised remarks.

“This can be a giant step forward in the march towards justice in America,” Biden said, as he called on citizens to “unite” against racism and violence.

Harris, America’s first female and first Black vice president, told the family it was “a day of justice in America,” and that “history will look back at this moment.” 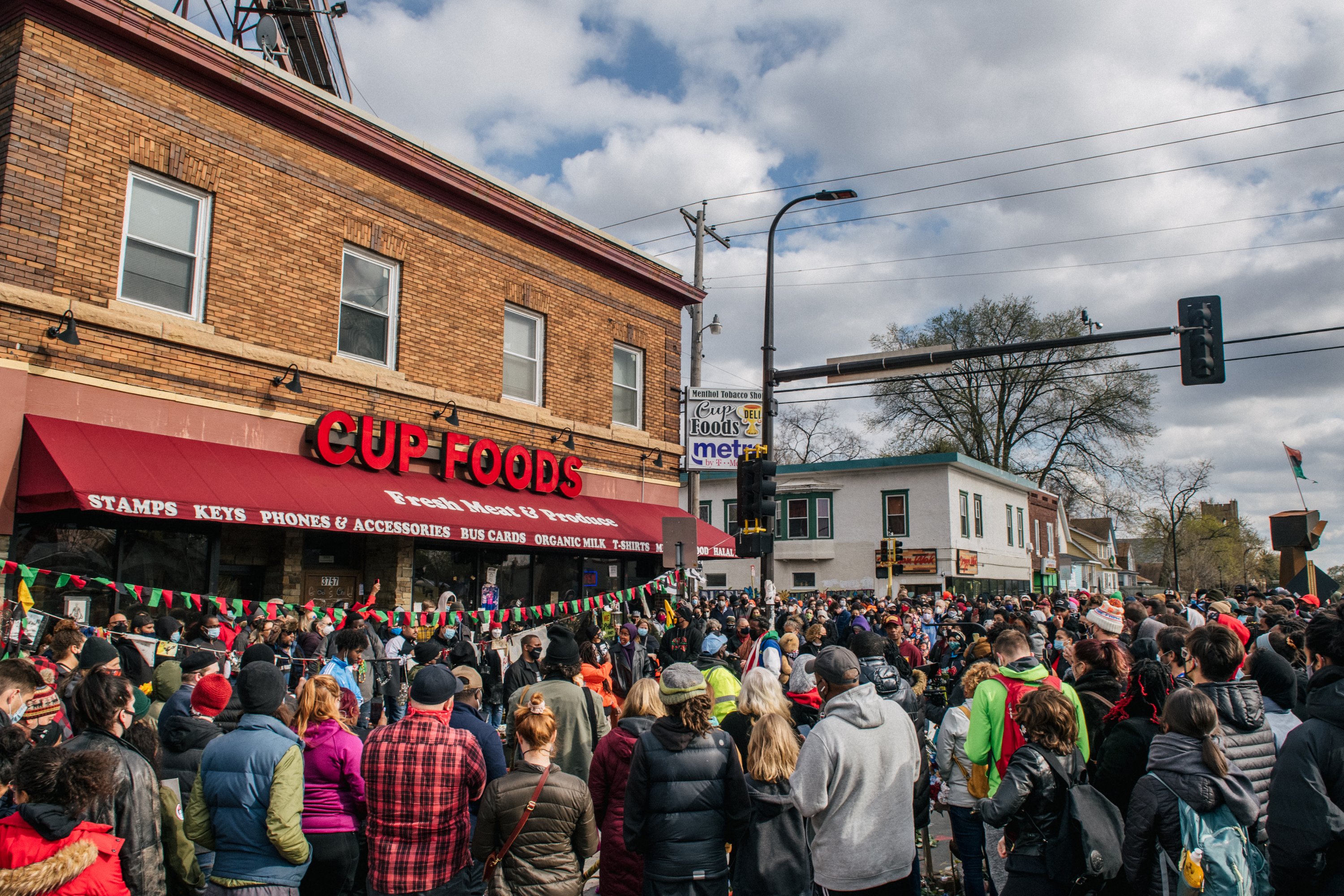 People celebrate the guilty verdict in the Dereck Chauvin trail at the intersection of 38th Street and Chicago Avenue on April 20, 2021 in Minneapolis, Minnesota. — AFP photo

Floyd family lawyer Ben Crump hailed the conviction as a landmark victory for civil rights and a springboard to legislation currently before Congress to reform police forces in their dealings with minorities.

“This verdict is a turning point in history and sends a clear message on the need for accountability of law enforcement,” Crump tweeted.

“Justice for Black America is justice for all of America!”

Barack Obama, the nation’s first Black president, said “a jury did the right thing” but “true justice requires much more.”

Three other former police officers involved in Floyd’s arrest are to go on trial later this year.

Minneapolis has been tense awaiting the Chauvin verdict and the city has seen nightly protests since Daunte Wright, a 20-year-old Black man, was shot dead in a suburb of the Minnesota city on April 11 by a white policewoman.

In Washington, the National Guard said some 250 troops were being deployed “to support local law enforcement” in response to potential demonstrations.

Prosecutors, in closing arguments Monday, showed excerpts from the harrowing bystander video of Floyd’s death that was seen by millions around the world.

“This case is exactly what you thought when you saw it first, when you saw that video,” prosecutor Steve Schleicher told the jury.

“This wasn’t policing, this was murder,” Schleicher added. “Nine minutes and 29 seconds of shocking abuse of authority.”

Much of the evidence phase of the trial involved testimony from medical experts about Floyd’s cause of death.

A retired forensic pathologist called by the defence said Floyd died of cardiac arrest brought on by heart disease and the illegal drugs fentanyl and methamphetamine.

Medical experts for the prosecution said Floyd died from a lack of oxygen from Chauvin’s knee on his neck and that drugs were not a factor.

Among the 38 witnesses who testified for the prosecution were some of the bystanders who watched Floyd’s arrest and pleaded with Chauvin to get off him.

Darnella Frazier, the teenager who took the video that went viral, said Floyd was “scared” and “begging for his life.”

“It wasn’t right. He was suffering,” Frazier said.

US Senator Tim Scott, one of just three Black Republicans in Congress, said there was “no question” that the jury rendered the right decision.

“While this outcome should give us renewed confidence in the integrity of our justice system, we know there is more work to be done to ensure the bad apples do not define all officers,” he said. — AFP