Saturday, May 8
You are at:Home»News»Sabah»Yasir and Alvin clinch tennis doubles title 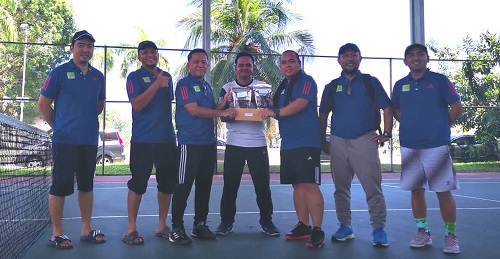 Yunus (centre) presenting the prizes to the Yasir and Alvin. Also in the photo are the other winners with Fadely (right).

The seeded pair justified their favourite tag when they defeated Group A winners Dr Muhammad Waqas Jawaid Mughal and Apoi Wan  in a closely contested final of the doubles event held at the Kota Kinabalu Sports Complex.

Organising chairman Fadely Chin, who is also Suria Tennis deputy president, extended his gratitude to all who have contributed to the success of the tournament.

“Although the matches were conducted under the new normal by complying to the SOP (standard operating procedure) due to the Covid-19 pandemic, the tournament remain a success.

“It was possible because everyone gave their cooperation…the fact that we were able to successfully staged the tournament was already an achievement.

“The most important thing is that we have the opportunity to return to actively playing again and to strengthen our friendship,” said Fadely.

Towards this end, Fadely thanked the sponsors including Real Beauty Arby, Dayang Rojak House and several individuals for their contribution to the tournament.

Suria president Yunus Ahmad presented the prizes to the winners.