Saturday, May 8
You are at:Home»Columns»All hands on deck! 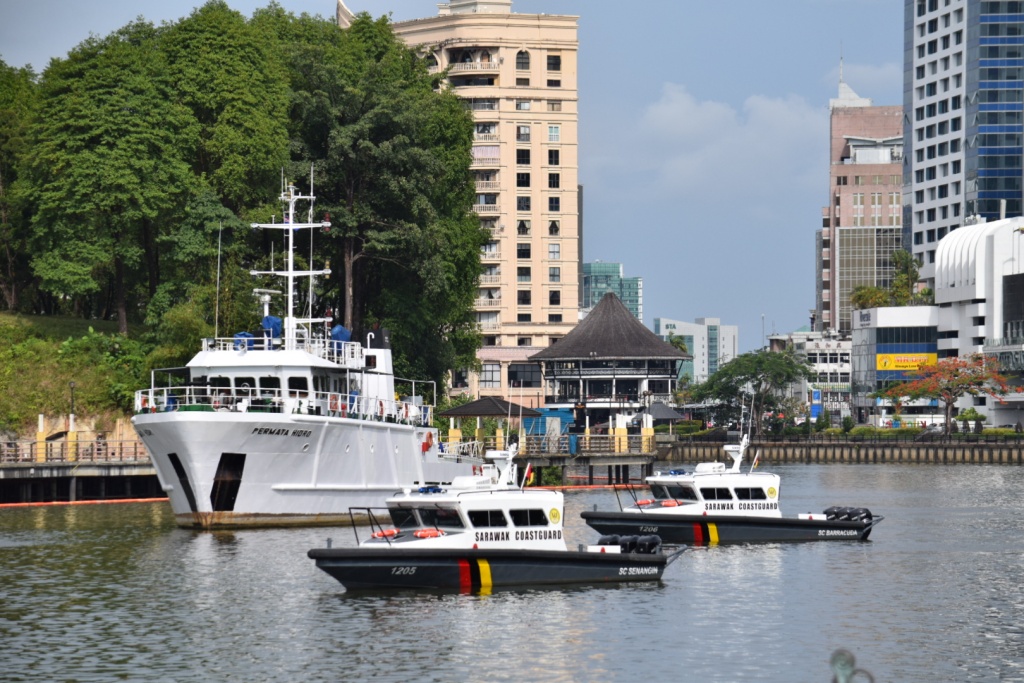 Two Sarawak Coast Guard’s interceptor boats are seen on the forefront of this photo, taken after the launch Kuching Waterfront in early April this year. — Photo by Roystein Emmor

THE date Wednesday – April 7, 2021, would go down in history as an important one in the annals of Sarawak. On that day, the Chief Minister Datuk Patinggi Abang Johari Tun Openg launched the services of our own Sarawak Coast Guard.

I salute those who have made this happen. All this while, we have been relying on the Royal Malaysian Navy (TLDM), the Malaysian Maritime Enforcement Agency (MMEA) and the Marine Police to look after our territorial waters.

Apparently, more assets are needed – the measures employed so far have yet to seriously deter foreign vessels from encroaching upon our waters and depleting our marine resources. More significantly, our sovereign rights have been violated at will.

The service of a Coast Guard under the control of the state is a very important development in terms of enhanced national security, especially that of our maritime national parks in the South China Sea. This is an ocean of immense economic and political importance in every way, not just for nature protection!

Sarawak, being part of the Federation of Malaysia, is in this politically-volatile region of the world.

The Sarawak Coast Guard is responsible for looking after the coastal areas of the state, stretching from Tanjong Datu to the border shared with Brunei, as well as some 1.2-million hectares of jungles.

Still, that does not mean that the Coast Guard cannot provide help when required, such as in times of floods and other emergencies, working together with the MMEA, the TLDM and the Marine Police.
In this context, the Sarawak Coast Guard is a most valuable asset, playing a role complementary to the other agencies.

I feel more secure now than I was a year ago.

I have written several articles about the problems relating to the encroachment on Sarawak’s waters by foreign vessels, which have been exploiting our marine resources.

I was informed by a Sarawakian, who once held a deep-sea fishing licence, that certain Malaysian-registered fishing vessels were selling fish to a ‘mother ship’ waiting out there in international waters, ready to buy fish from our fishermen.

That is obviously one reason why we do not get really good fish nowadays; when we do, they would cost an arm and a leg.

I hope that the boats of the Sarawak Coast Guard would be able to help monitor this sort of dealings on the high sea, and act against any violation of our rights to our marine resources.

At the same time, Sarawak Coast Guard’s interceptor boats should help enforce our sovereign rights, in accordance with the United Nations Convention on the Laws of the Sea (UNCLOS).

The message to Sarawakians is that your territorial waters would be properly patrolled, your resources would be protected, and your fishermen would feel secure.

I sincerely hope we would never see foreign gunboats prowling our waters at will again! Sarawak does have the rights of a sovereign territory, in force since 1954.

So watch out, you sports fishermen, scuba divers, and the hunters of animals – find out if you need a permit to fish or hunt in these areas, and if you do, get it!

The fishermen feel secure where they are if they are in contact with a Sarawak Coast Guard vessel patrolling the offshore areas nearby. I assume that these boats are fully equipped with the latest communications gadgets, even drones, so that help would come fast in the event of an emergency.

Our own fishermen, should they be in constant contact with Sarawak Coast Guard, must immediately report to the nearest interceptor boat about the presence of fishing vessels with fake licences, with a ‘copy of the report’ to go to the TLDM or the MMEA so that all relevant agencies would be alerted.

The smugglers of goods or human traffickers – they better watch out.

The first vessel is appropriately christened as ‘SC Tanjong Datu’.

I hope that there would be more assets added to the Sarawak Coast Guard’s fleet as it expands. It must be exciting to serve on one of those boats.

Any possibility for journalists to be invited to witness any drama on the high sea – impounding of a foreign vessel with a cache of M16, for instance, or of a vessel loaded with logs of valuable timber extracted from one of the forests in one of the national parks? Now, that would make the newspaper headlines!

Recently, there was a report of the sighting of whales around the Luconia Shoals – a part and parcel of our territory. This would be a potential tourist attraction, indeed.

It is, therefore, recommended that when the time is right – say, after the end of the Covid-19 pandemic – visits to our shoals should be made.

I love boats, and I love marine creatures – please reserve me a seat in the first whale-watching expedition!

Previous ArticleTraders can be charged for raising prices indiscriminately, says minister
Next Article Navigating the Challenging Waters of the ‘something in between’