Thursday, June 24
You are at:Home»Features»Always reaching out to its students 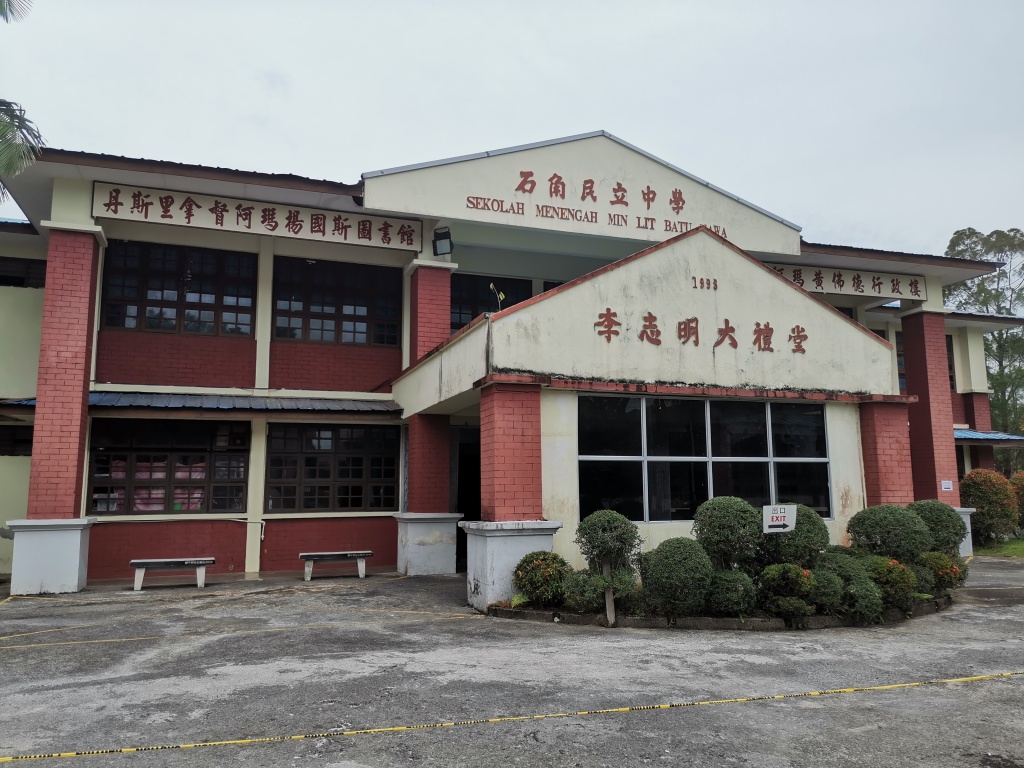 A view of SM Min Lit Batu Kawa’s existing block, which is over 50 years old.

SM Min Lit Batu Kawa aspires to do all it can for all its charges, but it still needs more support and assistance

THE idea of establishing SM Min Lit Batu Kawa, one of the four Chinese independent secondary schools, or Du Zhong, in Kuching was mooted during World War II, but what kicked off the project was an incident that occurred in 1958.

That year, when road accessibility was severely lacking, a student drowned when crossing the river to attend classes at one of the Du Zhong in town.

It took nearly a decade for the project to take off and finally in 1967, SM Min Lit Batu Kawa was finally established, with 150 students.

The structure remained as a simple wooden block until a facelift in 1995 around the time when the institution began running Senior Years classes.

Located at the Batu Kawa Old Bazaar about a 30-minute drive from Kuching city, the school occupies an area covering a little over two acres.

Today, the school has 11 classes — five Junior Years and six Senior Years accommodating 260 students — touted as the highest number of students the school ever had historically.

“We have 21 teachers including four part-time ones teaching Mathematics, Arts, Book-keeping and Physical Education.

For now, SM Min Lit is a small-size Du Zhong, and it aspires to grow into a medium-size one.

“In order to qualify as a medium-size Du Zhong, the total number of students must exceed 300,” said Chai, adding that the school recorded 64 Junior 1 students early this year, including those from Bau, Muara Tuang and Mile 19 of Kuching-Serian Road. 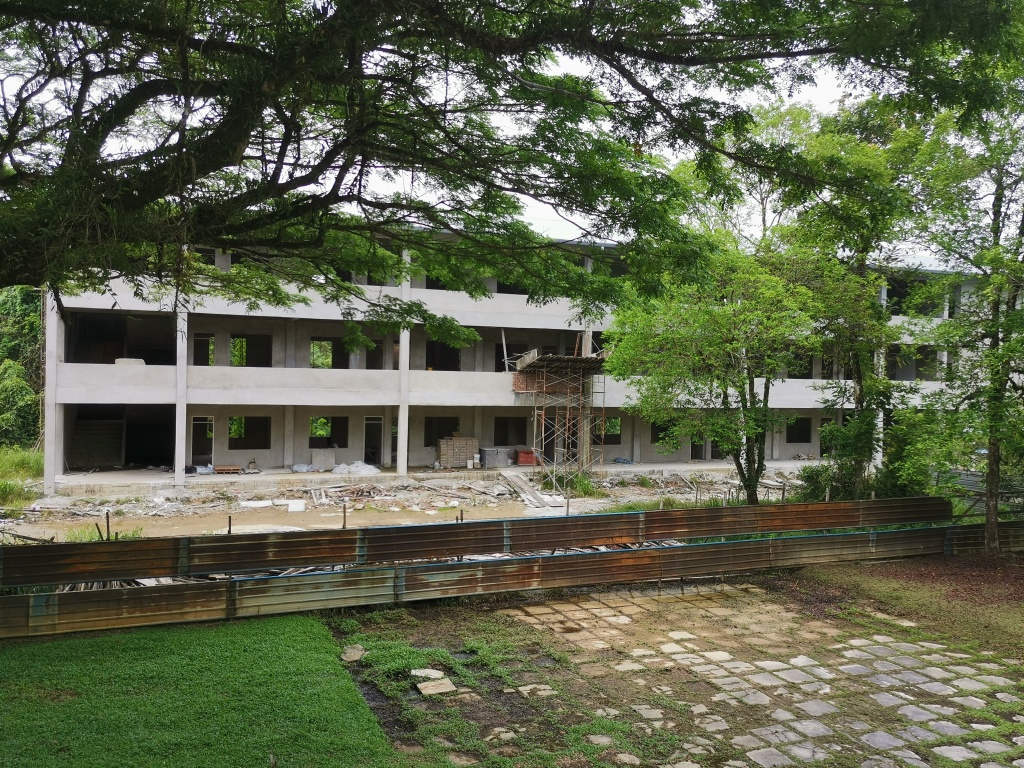 Construction of the new school block in progress.

A new school block is being built adjacent to the existing block. This project, costing under RM2 million, was supposed to be completed in August last year.

Due to the Covid-19 pandemic, the new three-storey building housing 12 classrooms had to be rescheduled for completion by this year.

SM Min Lit Batu Kawa also has a canteen, a library and a science room.

Back in 1970, the total number of students was 235, but it kept growing over the years due to various factors.

The school even ceased operating between 1972 and 1975 due to unstable political conditions. The elected representative at the time, the late Datuk Chong Kiun Kong, revived the school in 1976. By then, it had only 14 students.

The total number of students had been in the two digits until 1988, when the figure rose to 120. In 1991, the school started providing computer programme classes.

In early 1990s, SM Min Lit Batu Kawa faced serious financial difficulties and the school board decided to bring in Taiwanese singer-songwriter Jolin Tsai, who staged a concert that raised RM60,000 for the school.

This fundraiser helped a bit.

The school was still recording annual deficits of hundreds of thousands of ringgit — its financial situation improved only when the Sarawak government pledged its annual allocation for Chinese education starting from 2016.

According to Chai, students of SM Min Lit Batu Kawa pay only one-third of the school fees compared to what their counterparts in town are paying.

Roughly, this translates into the school board funding RM2,000 per student every year.

Chai said the school’s annual operating expenditure was between RM700,000 and RM800,000, and the fees collected from students amounted to some RM200,000.

“Thanks to the Sarawak government, SM Min Lit Batu Kawa received over RM400,000 in allocation last year. We did not do too bad last year,” he said.

Apart from the existing 50-year-old block, the school also has an old quarters serving as a hostel accommodating 11 to 12 students. It has been vacant since the start of the pandemic last year.

A student only needs to pay RM20 for the hostel, which used to be a temporary home of a student who came all the way from Mukah.

Once the new block is ready, SM Min Lit Batu Kawa could take in more new students and should the number hit 70 next year, the school would open three Junior 1 classes.

Even though most UEC (Unified Examination Certificate) holders from SM Min Lit Batu Kawa, if they decided to pursue tertiary education overseas, would choose Taiwan, China and Singapore. The school recently signed an MoU (memorandum of understanding) with the United Kingdom Education Centre (UKEC) to offer counselling services for students.

“This would expose students to more choices when it comes to pursuing higher education. We want our students to see other options, such as furthering studies in New Zealand and Europe,” Chai pointed out.

He said the UKEC would gather input from students and analyse for the young ones on which course and university to pick.

In such a way, he believed that students would be kept in the loop regarding the courses available, which should enable them to make informed decisions.

Despite the Covid-19 situation, SM Min Lit Batu Kawa plans to launch a short-term course on hydroponic cultivation for its students in the second half of this year.

Chai said the short-term course would be set to equip students with other skills than the typical academic know-how.

“The majority of the parents in the Batu Kawa areas are farmers, and hydroponic cultivation should help them (students) pick up some farming skills.

“The school will be in discussions with some entrepreneurs in Batu Kawa to offer the short-term course. This will be a win-win because we are helping these entrepreneurs train potential professionals to go on developing the industry.

“It is also to enhance the economic chain as students are equipped with extra skills while learning how to do business through the ‘Introduction to Business’ class,” he added.

The hydroponic cultivation course is opening up an alternative, particularly to students who are not interested in academic studies.

Gone are the days when academic performance mattered the most and in this sense, SM Min Lit Batu Kawa aspires to unearth and develop talents rather than coercing students to achieve solely academic excellence.

“Of course we want our students to have the basic level of education, but we would prefer to see them develop their potential instead of doing something that they are not happy with,” said Chai.

The school adopts the latest teaching methods and introduces adjustment to meet students’ needs. Of late, it has opted for natural approach, which is to help students learn in a natural way. This is because spoon-feeding no longer works as the students, who could be more exposed to the technology era, need to be guided to think for themselves.

According to Chai, the natural approach has proven to be a successful teaching method.

Citing learning a language as an example, he said students would be encouraged to listen and do oral-sessions rather than being asked to memorise the vocabulary, grammars and tenses.

“We start from Junior 1 by introducing role-plays by getting the students to watch a video and emulate what has been expressed as part of the exercise.”

Chai admitted that many students had a lot of catching up to do in terms of the English Language and Bahasa Melayu subjects.

“One thing is that these languages are not their mother tongue, and the other thing is the severe lack of practice.

“Students who communicate with their parents in English do speak better English. We hope that through the natural approach, the students would have fun learning,” he said.

This year, SM Min Lit Batu Kawa has come up with an extra 35-minute lesson for students to learn languages, the arts or hydroponic cultivation.

School session commences at 7.20am, and concludes at 2pm.

Those who complete their Junior Class and wish to pursue Science Stream would have to join Chung Hua Middle School No 1 in Pending.

SM Min Lit Batu Kawa does not offer Science Stream for the Senior Years for this class lacks the necessities and capabilities.

“We are making do with what we have to offer the best that we could for our students,” said Chai.

Sixty-two Senior 3 students of the school will be sitting for the UEC examinations, scheduled to commence this Nov 16, while 11 Sijil Pelajaran Malaysia (SPM) candidates sat for the public examinations early this year.

During the floods early this year, the school hall was turned into an evacuation centre to house some 160 flood victims for three days, beginning from Jan 14. 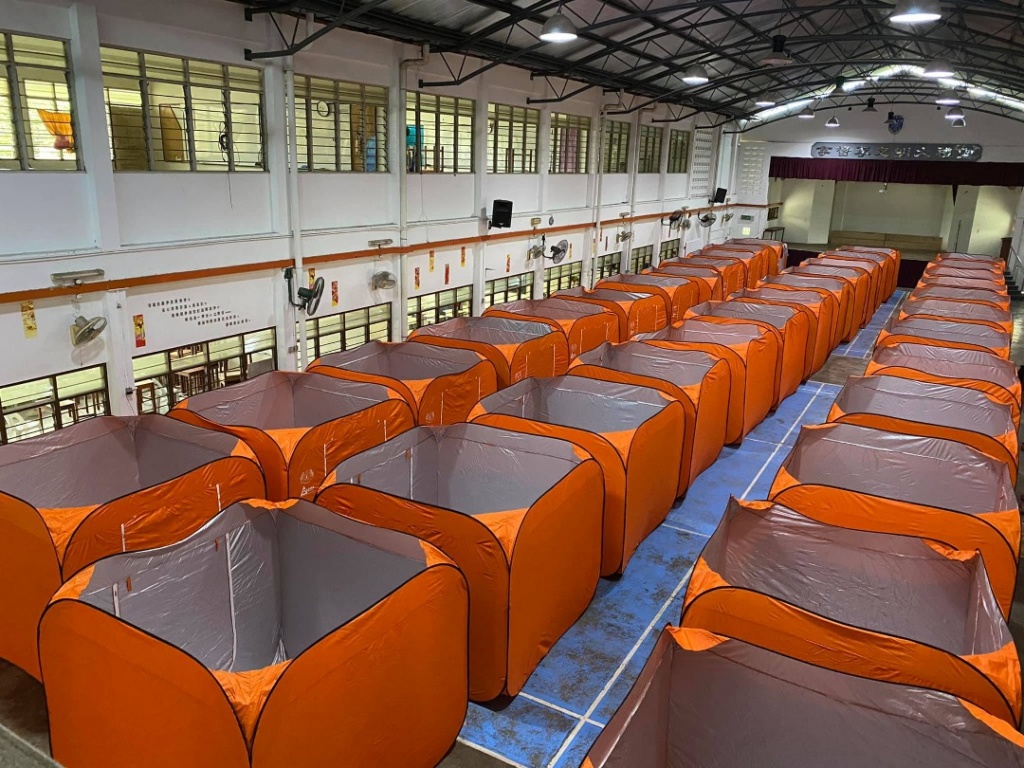 Photo shows evacuation tents inside the school hall, which served as an evacuation centre for flood victims early this year.

The school was closed at the time due to the pandemic, and it resumed the physical classes after the Chinese New Year celebration.

Chai said the student could not adapt and ended up being a dropout.

He had been monitoring this particular student on Instagram, where the latter had been posting a lot of his artworks.

In the end, Chai contacted the student and advised him to return to SM Min Lit Batu Kawa.

“Anson Then is self-taught — he never attended any arts class before. It’s not known how he picked up his drawing skills. He quit SM Min Lit Batu Kawa because he did very badly in the junior UEC examinations.

“After he came back to us, we encouraged him to develop his talent.

“This is the kind of student who needs guidance. They may not perform academically well, but they have other talents that ought to be developed,” said Chai, adding that it would be a shame if Anson’s talent had remained untapped.

He shared a couple of artworks done by Anson, one of which is a portrait of the Director-General of Health, Tan Sri Dr Noor Hisham Abdullah. 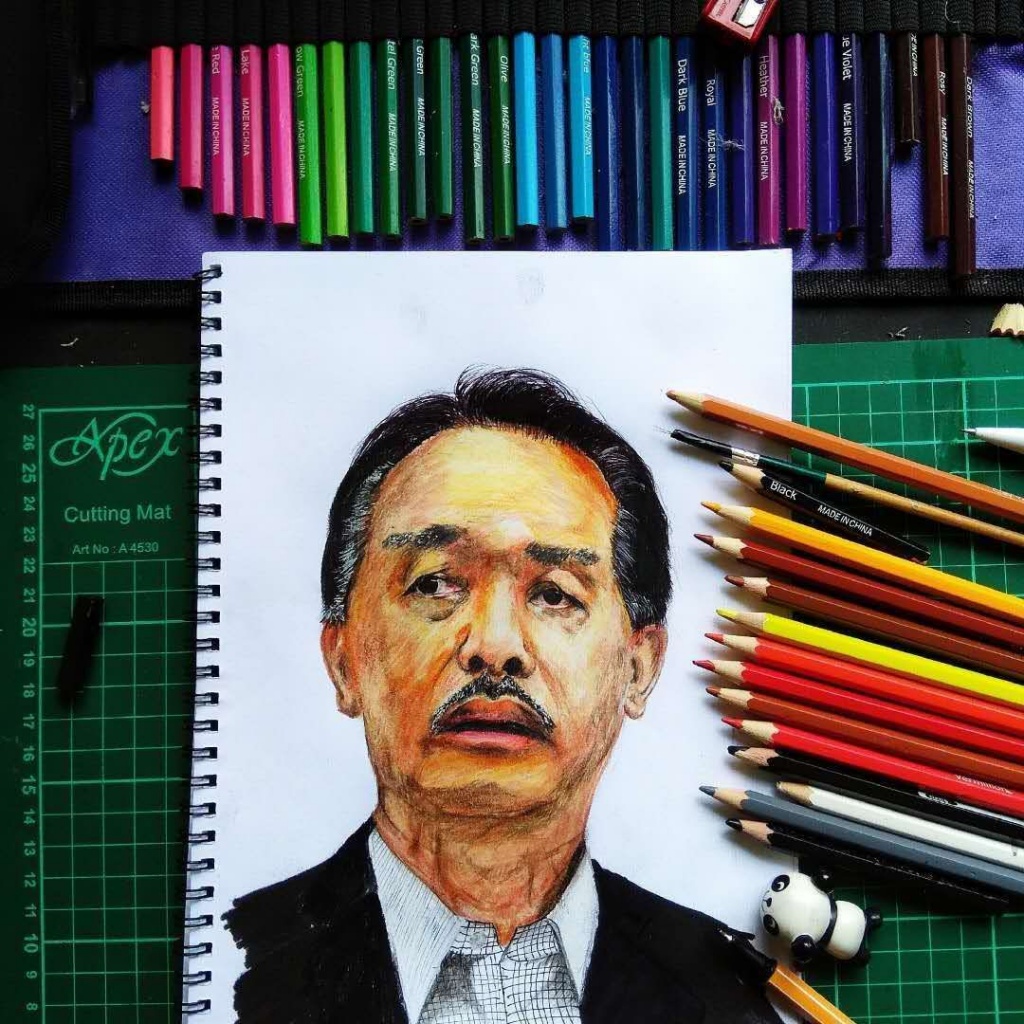 A portrait of Dr Noor Hisham, done by Anson.

“Anson is not a top student in terms of academic performance, but he has the potential to become an artist. We encourage our students to unearth their talents and unleash their potential for their own good.”

There have been occasions where the school has to bring in parents over any some disciplinary issues; other times, Chai would arrange for social calls on some families.

During the Movement Control Order (MCO) period being enforced last year when students were asked to go for online learning, Chai had to make a call on Anson’s family because the student was reported being absent from classes. 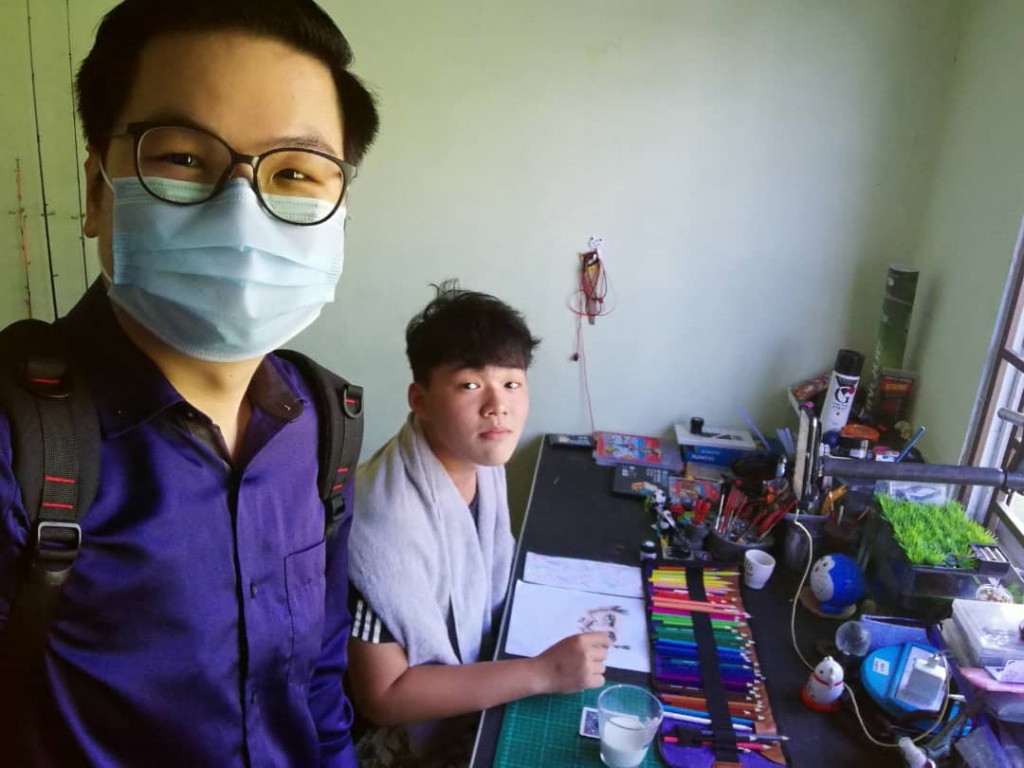 Chai (left) seen with Anson during a call on the family.

“This is how the school has been reaching out to its students.

“At times, parents are reluctant to come over to the school as they reason that they are busy at work. What parents fail to realise is that they could be the reason why their children are having problems at school.

“We used to have a bad-tempered student and after meeting the father, we realised that the students was merely emulating the ill-tempered father.

“We told the father that only after he improved by keeping his emotions in check, could the student see some improvements too. The father did heed our advice and in the end, we got a less grumpy student,” he recalled.

On his hope for SM Min Lit Batu Kawa, Chai said the school was in dire need to upgrade its library and science room.

He said a lot of people had donated books to the school but the problem was that some of these materials were so obsolete that they were no longer relevant to today’s world.

“We appreciate such effort, but we hope the books donated to the school could be more relevant and up-to-date.”

He also hoped that generous individuals would chip in for the upgrading project, estimated at RM100,000, to give a fresh image to the school’s library.

“Our science room needs more equipment. We did an estimate last year and at least RM60,000 is required to purchase all the necessary equipment. We hope to get sponsorships and make these two upgrading projects happen this year,” said Chai.