Saturday, May 8
You are at:Home»Features»More than a fundraising idea 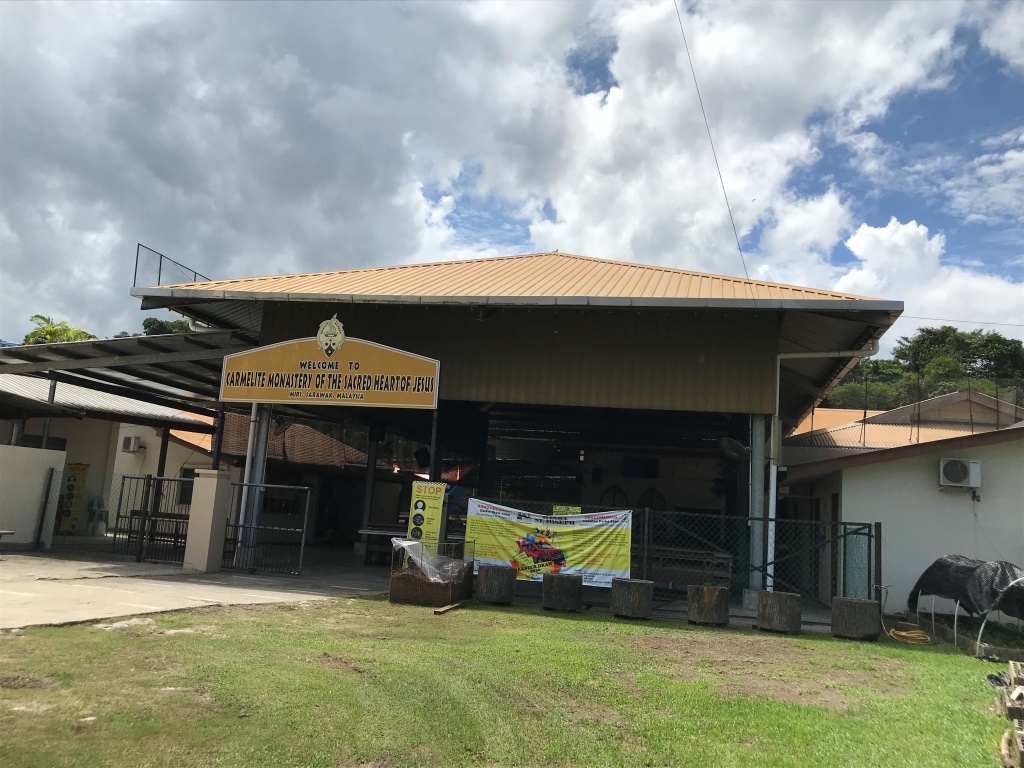 Photo shows the Carmelite Monastery of the Sacred Heart of Jesus in Miri.

IN 2017, it was mooted that a garden could be set up behind the St Francis Chapel in Miri, where there was enough land to plant some vegetables. It did take off but the progress was rather slow – until 2020, when the Movement Control Order (MCO) was first enforced as a way to counter the spike in the number of positive Covid-19 recorded on Sarawak.

By then, the Roman Catholic brothers and sisters, who had been tending the organic garden, grew even more vegetables. Now, there are 27 beds of vegetables.

Vegetables like yams are grown in bags and pots, but some thrive along the beds. It seems like every inch of the precious plot is being put to good use. 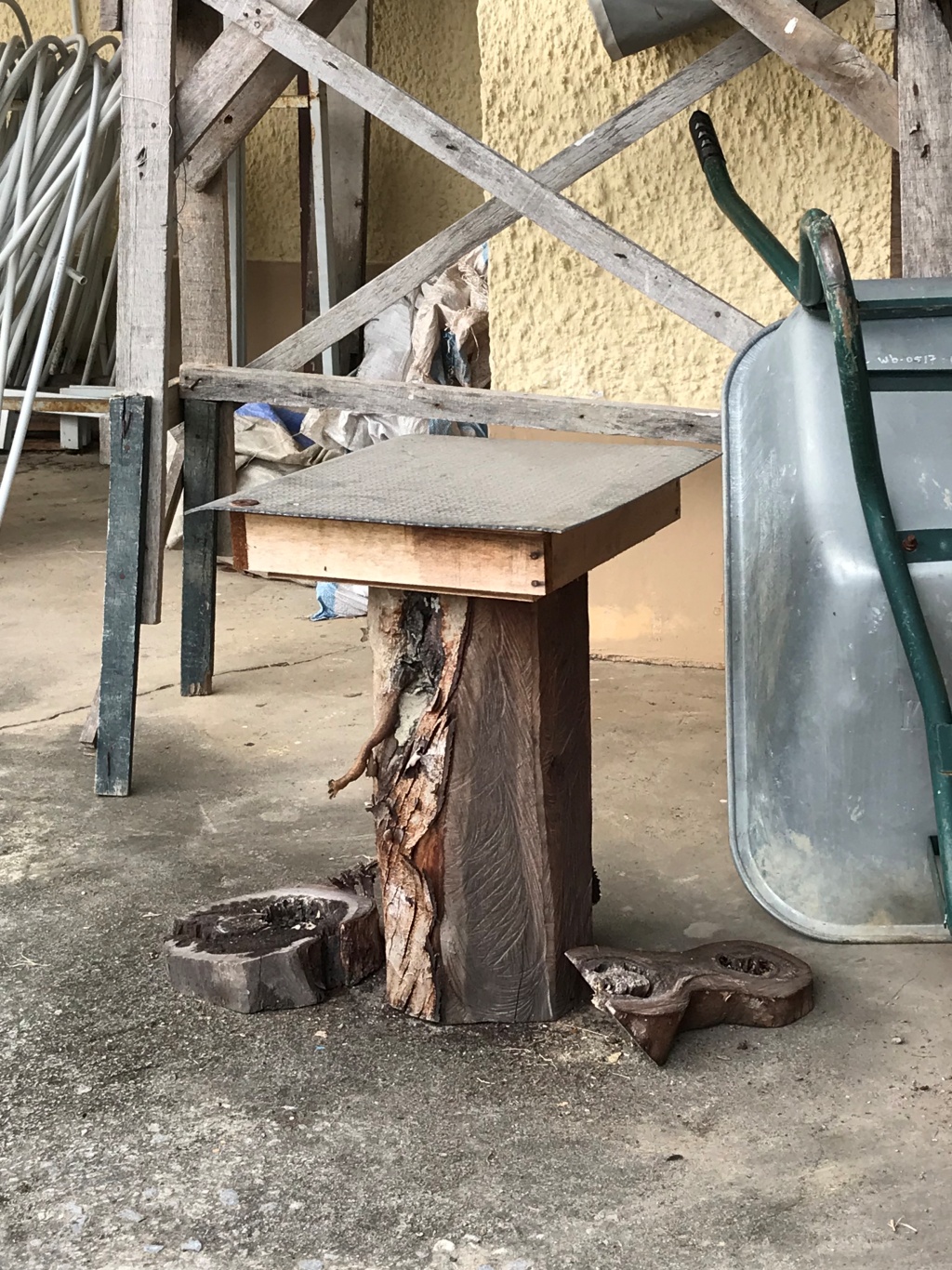 A ‘kelulut’ beehive seen at the area adjacent to the chapel.

There are also three hives of ‘kelulut’ (stingless bee), from which comes the highly-prized honey that is being processed at the area adjacent to the chapel.

Dreaming of a new cathedral

Wisma St Joseph in Miri is a dream of the local Roman Catholic congregation.

The old St Joseph’s Cathedral is now too small for the ever-growing Miri parish – it only has a seating capacity for 500 people at one time.

For some time, the parishioners have been raising funds, from which the proceeds could be used to build a better cathedral.

The Wisma St Joseph project would cost some RM25 million.

According to a spokesperson, the new cathedral is now in the design stage, with the designing commissioned to a local consultant.

“We are at the last stage of acquiring the four-acre state land at the Miri Bypass. Earth-filling works have commenced and once we obtain the land title, the project could really kick off.

“At present, the amount that has been raised is about RM22 million,” said the spokesperson.

It is quite fortunate for Miri to have its own cathedral. Based on the historical definition, one of the criteria for a town in Europe to become a city is for it to have a cathedral.

The parishioners who have been attending to the St Francis Garden are very enthusiastic.

One ‘Aunty Chris’ showed the writer around and said how the group would develop compost to get all the plants growing.

This process would need a high level of patience, as it would take more than six months for the leaves and other vegetable-based materials to turn into dirt.

Composting is regarded as a natural way of producing organically-fertile soil and also fertiliser with a little help from humans.

Well-wishers would also chip in – those from coffee shops would give away used coffee powder; the fishmongers would bring in fish guts and scales; those from mills would donate sawdust. The sea, on the other hand, is a natural contributor – the ‘sepok’, or the washed-in debris would be collected by the parishioners for the vegetable patch. 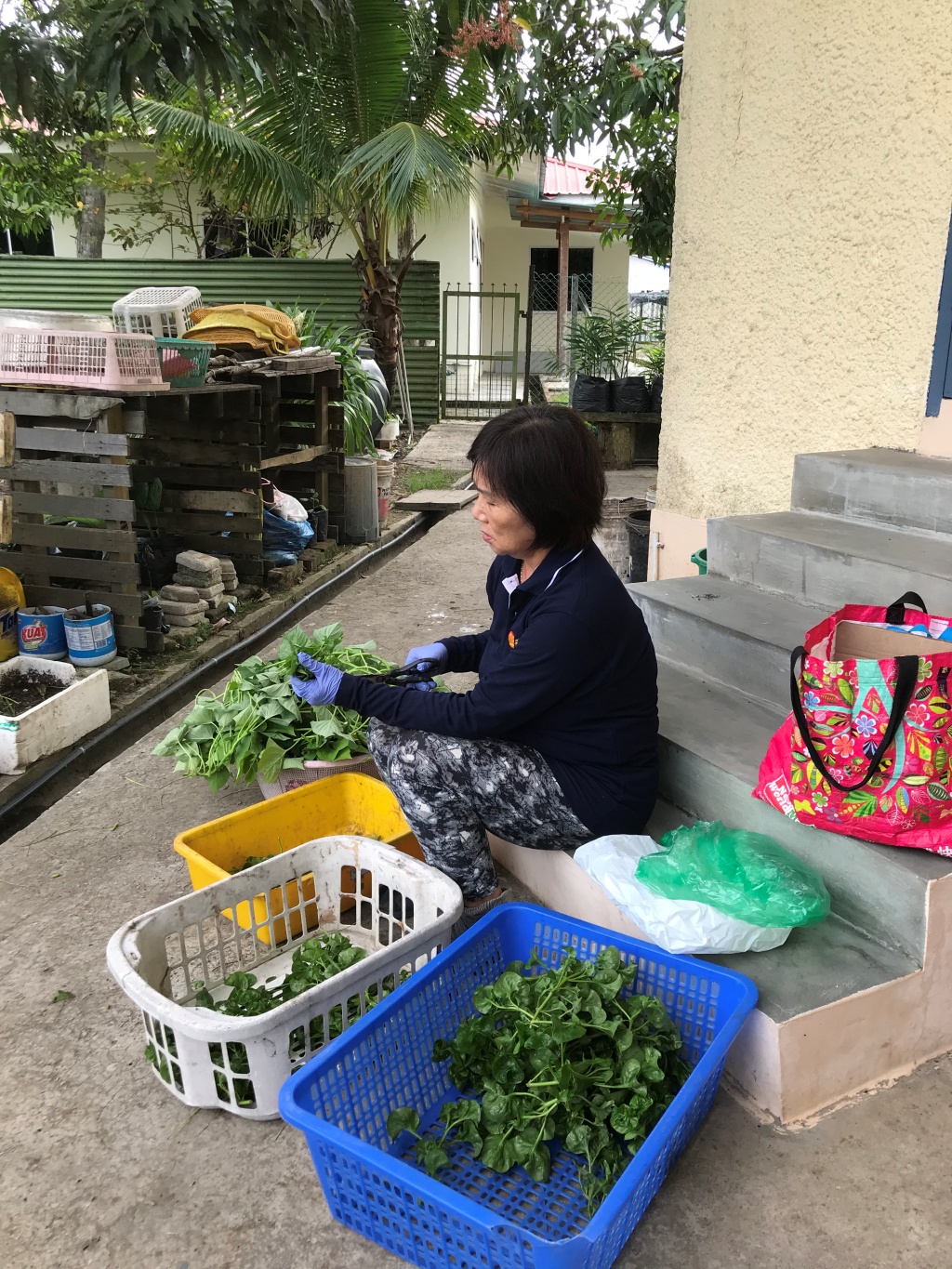 Aunty Rosa trims the stalks off the sweet potatoes, which she would sell later.

“Look at the burnt soil that we are producing!” exclaimed one ‘Aunty Rosa’ as she was ‘happily’ trimming the stalks off the potatoes, meant to be sold in the evening.

“We even have a wire-sifter to sieve the soil so that they would become very fine.

“It is to be added to the top soil as we transplant our baby vegetables from the nursery patches. “We would harvest the vegetables in every cycle, and the well-wishers would snap up all the produce.

“We’re very happy to be working together here and helping the church this way.

“It is indeed an excellent way to raise funds for the ‘wisma’ (building).”

‘Aunty Chris’ showed the writer the compost bin, said to contain up to RM400 worth of the prized natural fertiliser.

“We sell the compost to those who want it. Here, we have all these wooden boxes containing substance in various stages of composting.

“It is a joy to be able to create fertile compost in a natural way.”

‘Aunty Freda’, a permanent staff member of the chapel, added on: “We don’t waste a single blade of grass here. Every green matter would be turned into compost.”

Of flavourful ginger, taro and wintermelons

One stretch of the garden alongside a fence and drain truly overwhelmed the writer. 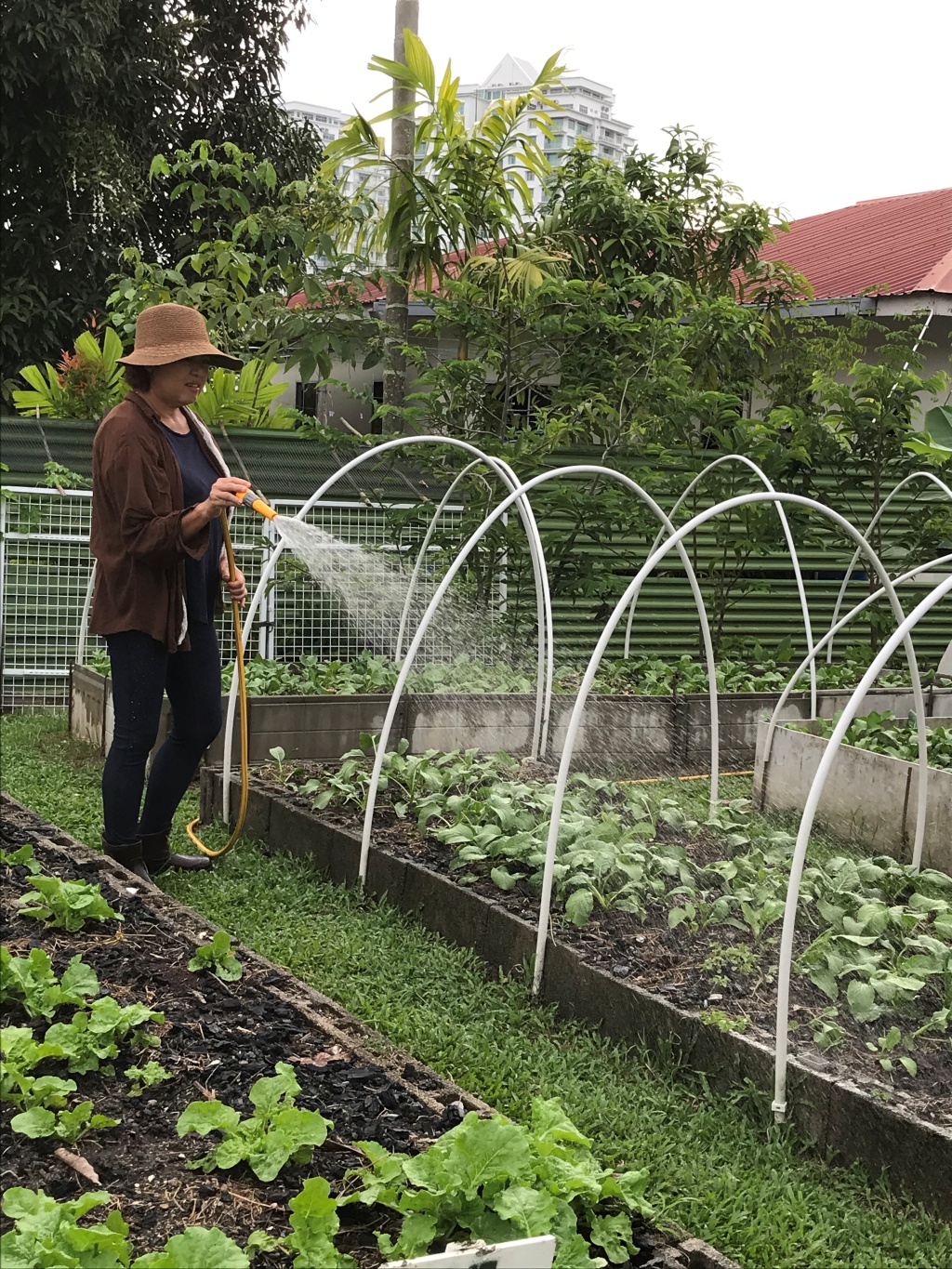 Aunty Chris does some plant-watering.

The gardeners planted lots of ‘Bentong Ginger’ – the name indicates its origin in Peninsular Malaysia – grown in black plastic bags, each could easily contain more than 1kg of the fresh young rhizomes.

A friend was also delighted when she heard about the garden selling fresh Bentong Ginger and would like to buy a few kilogrammes immediately, as a gift for confinement.

This variety of ginger has a lot of medicinal benefits, among which it helps with general blood circulation and can expel cold from a new mother’s body. It is the best ingredient for ‘Vinegar Pork Leg’ – a popular confinement dish.

From cultivation to harvesting, it takes around six to seven months for young ginger, while for old ginger, it requires at least 11 months.

Some farmers typically harvest old ginger from the ground and wait for many small nubs to sprout before returning it back into the soil, where it continues to grow.

A row of Chinese taro grows on the edge of the drain, which really looks good. This tuber also takes about six to seven months to mature and usually, farmers grow two crops a year – with one especially to be ready for the Chinese New Year.

The Chinese love taro because eating ‘wo tou’ head of taro auspiciously means the members of the family can become successful leaders of their industry or trade.

It is also an important dish for the birthdays of the patriarchs and just-graduated children. Usually a Chinese banquet would have a ‘Yam Ring’ towards the end of the course to help diners with their digestion – taro is full of fibre.

Wintermelons are grown on a special framework. There are more than 30 fruits in the garden, looking like party balloons.

Usually with good soil, the vines can produce up to 100 melons each crop. 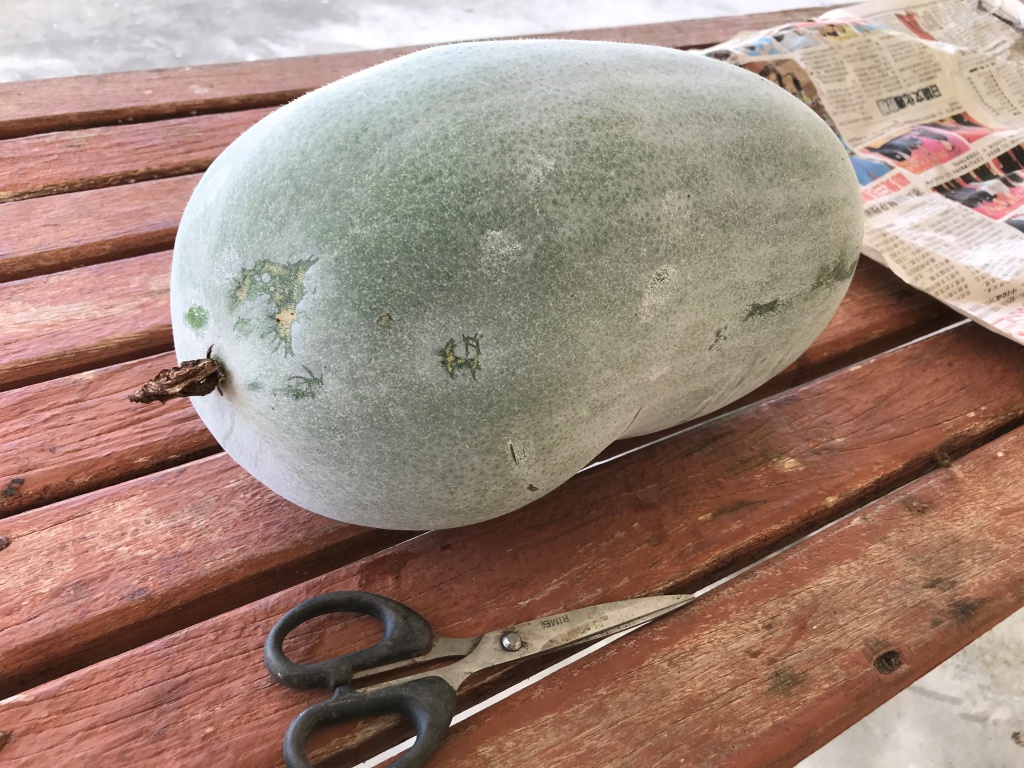 This huge wintermelon can easily weigh more than 3kg.

On average, a wintermelon weighs more than 3kg, and sells for about RM6 per kilogramme.

The seeds of the white brinjals have come from Kuching and the plant is doing very well.

All the plants are tended by volunteers, who would come around 4pm every day to do the watering, transplanting, harvesting and selling. 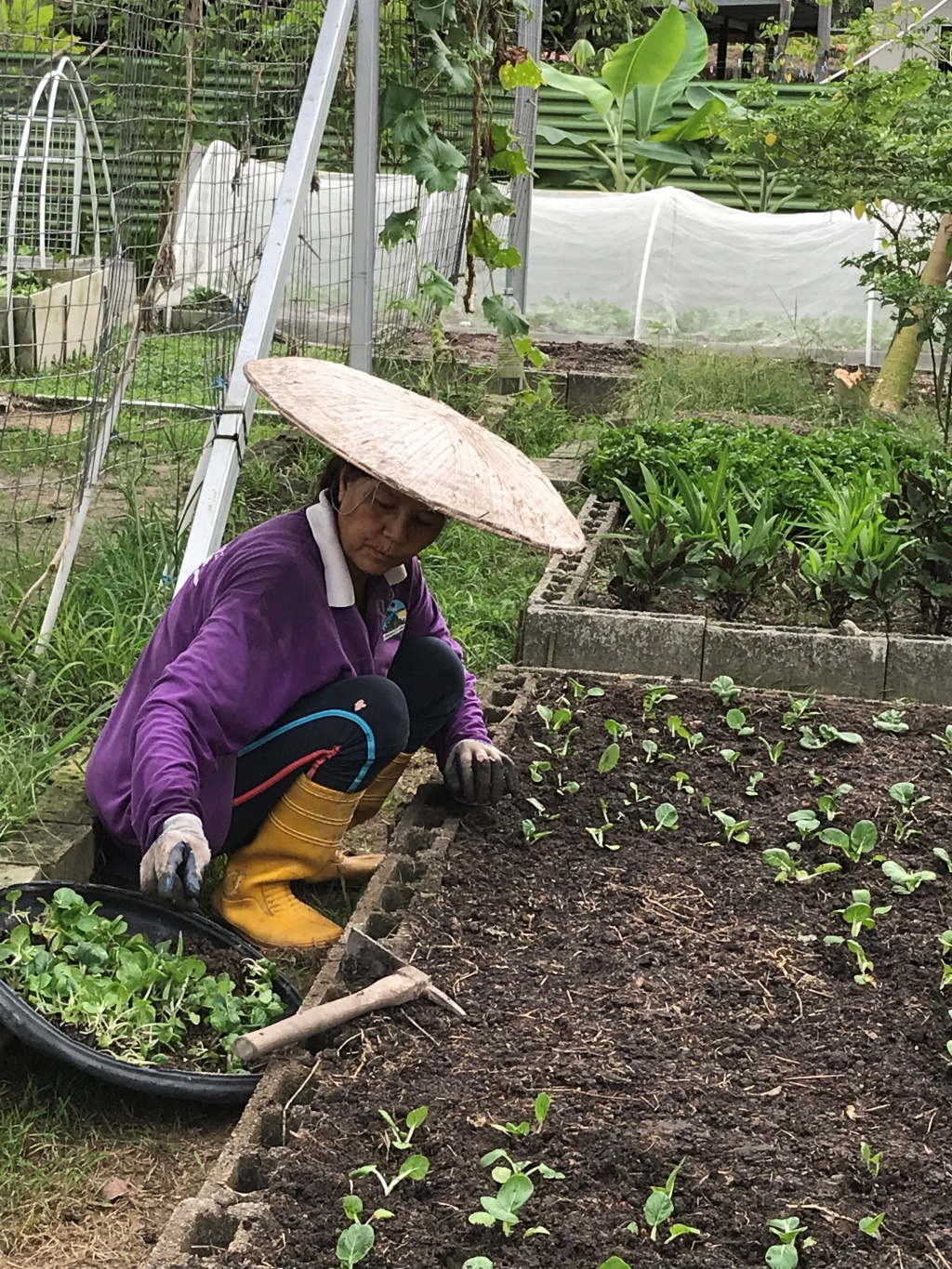 Baby vegetables being tucked into the ‘green beds’.

Some volunteers even provide snacks and special treats for the ‘garden friends’.

“It’s all a good fellowship. It is work and fun, with lots of fresh air. And most importantly, all the hard work pays off,” said Aunty Rosa.

Full-time garden helper, Aunty Freda, a Kenyah, is always cheerful and efficient – always around to sell the vegetables once they mature.

Aunty Rosa said although small, around 10 of them, this group of brothers and sisters come almost every day during the Covid-19 period to keep the garden going.

Previous ArticleAlways reaching out to its students
Next Article Myanmar violence must end, democracy be restored: Indonesia president