Saturday, May 8
You are at:Home»News»Sabah»Tambunan’s intriguing ‘Batu Gong’ to be resited 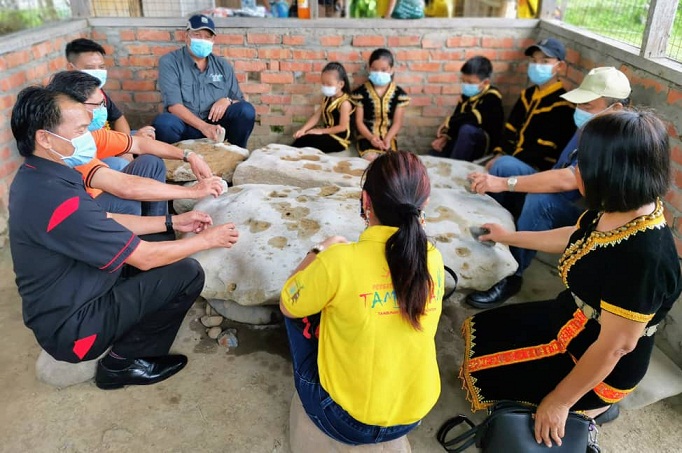 Joniston (fourth left) and several villagers trying their skills on the Batu Gong, which emits different pitches of sounds when struck at the right spots. The intriguing batu gong was discovered in 1995 at the Pegalan River in Kampung Solibog, Tambunan.

TAMBUNAN: The “Batu Gong” at Kampung Solibog here would be relocated to a more convenient site due to its growing popularity.

Construction of the new site is nearing completion, utilising a RM20,000 allocation under the State Government’s Sabah New Deal grant.

The Batu Gong is currently placed in the compound of the Ketua Kampung’s house about seven kilometres away from Tambunan town.

These intriguing and unique stones that emit a gong-like sound when struck are placed under the care of Kampung Solibog villagers.

Discovered by villagers at the nearby Pegalan River in 1995, these stones are kept in a hut built on private land to prevent them from being stolen.

Tambunan Tourism Association president Patricia Kitingan said these unique stones had made Kampung Solibog a place of interest in Sabah and that they had identified a new site to move Batu Gong, which is some 100 metres away from its current location.

“A new hut is currently being constructed and the stones are expected to be relocated between June or July, depending on the pandemic situation. The relocation will also involve rituals,” she said of the plans.

Kitingan said the villager, who owns the current location of Batu Gong had long requested for the relocation as the site was inconvenient for both visitors and the landowner.

The Sabah New Deal is a state government financial assistance available for tourism industry players affected by the pandemic to help upgrade their respective tourism products. The Sabah Tourism Board (STB) coordinated the distribution of special assistance.

Kitingan said STB had also assisted in the setting up of public restroom and tourism kiosk to complete the whole infrastructure for the community-based tourism in the village.

“Our association will also help the community to apply some funds to build a kiosk for their economic centre, where villagers can exhibit and sell their handicrafts, arts, and other products.

“The district office had also recently applied to have a gallery hall to complement Batu Gong product.

This will allow villagers and visitors to conduct handicraft making, have mini gathering, or hold wedding reception to add income into the community funds.

“We want to uplift the villagers’ livelihood and that’s why the community needs support from the state government to build products and improve facilities,” she said, adding the villagers have also taken the initiative to beautify the Batu Gong surrounding areas.

“I believe that many Sabahans are unaware of the presence of these gong-like sound stones, and I see it has the potential to become a tourist attraction product not only in the state but also outside of Sabah.

“We need to highlight tourism products like Batu Gong that can provide income to the community and to attract more visitors to explore the countryside,” said Bangkuai, while encouraging rural tourism operators to make improvements to the existing facilities.

During his visit to Kampung Solibog, Bangkuai also tried his skill on the Batu Gong along with other villagers.

The musical stones would emit different pitches of sounds when struck at the right spots. A complete gong beat usually performed during festivities could also be played on these intriguing stones.