Saturday, May 8
You are at:Home»News»Sarawak»All workers rescued from damaged oil rig near Bintulu 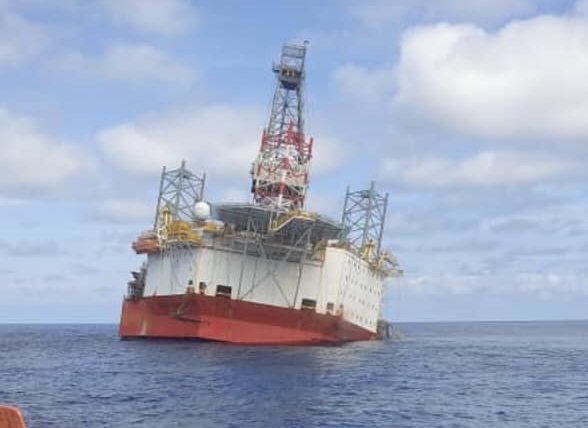 A photo purportedly of the damaged rig listing in the sea near Bintulu. – Photo via Seafarer Life/Facebook

KUCHING (May 4): ConocoPhillips Sarawak Ltd has confirmed that all those on board its jack-up drilling rig Naga 7 have been evacuated.

The company said in a press statement issued today that the marine incident occurred on Monday.

“A marine incident occurred on May 3, 2021 at approximately at 2.45pm when the jack-up drilling rig Naga 7 was being positioned at Salam-3 located offshore Sarawak.

“We confirm that Naga 7 is listing and response efforts are already underway,” the company said.

The company said its Emergency Response Team has been mobilised and other authorities have been informed.

“Out utmost priority and concern are the safety of the people and we confirm that all persons on board have been evacuated off Naga 7.

“There were no known injuries or environmental damages,” added the statement.

The rig is owned by by Velesto Energy and working for ConocoPhillips.

When contacted, Miri Divisional Disaster Management Committee (MDDMC) minister in charge Datuk Lee Kim Shin said he had been informed of the incident and had approved the request for the 101 crew members, the majority of whom are Sarawakians, to be transported to the Offshore Transit Centre (OTC) here.

“This is an offshore emergency case and therefore we had given immediate approval for the crew to be taken to OTC here.

“As per standard operating procedures (SOPs), all 101 crew will be asked to wear wristbands and mandatory quarantine order by Minister of Health upon arrival at Miri Port,” he said.

He added that all crew members would undergo the 14-day mandatory quarantine and that the cost would be borne by their company.

Yesterday, the ‘Seafarer Life’ Facebook page had detailed the incident and reported that the crew members were safely rescued.