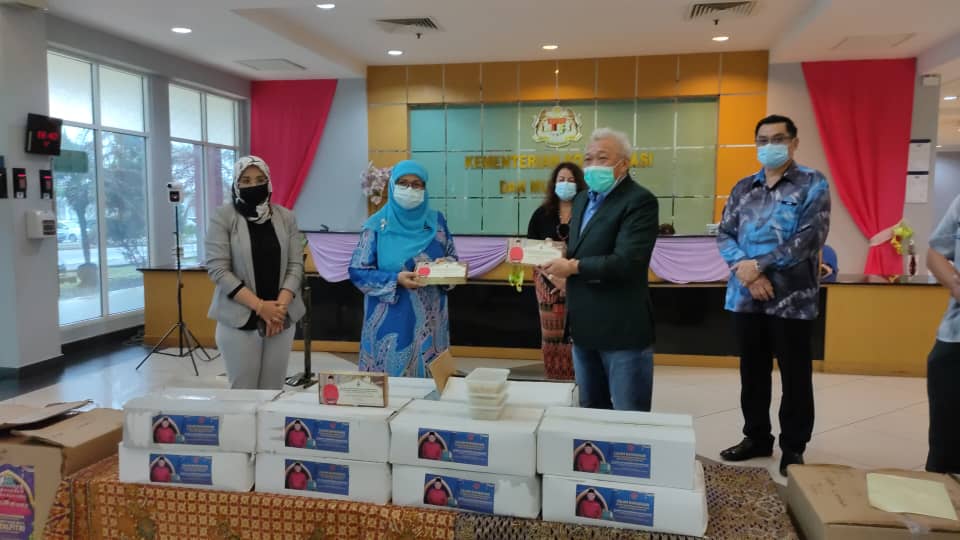 Bung Moktar handing over the contribution for RTM staff to Norain at the KKMM Kepayan Integrated Complex.

KOTA KINABALU: The state government appreciates the services and contributions of Radio Televisyen Malaysia (RTM) and other media as an effective medium for delivering news and information to help Sabah’s development efforts.

Deputy Chief Minister Datuk Seri Bung Moktar Radin in saying this added that in the sophistication of a borderless world, false news were spread by irresponsible parties, especially on social media in attempts to poison the minds of the people as well as slandering the government.

“As the government’s official media, we appreciate RTM’s efforts to broadcast the denial of fake news through the use of 24 languages and dialects through the available information sharing platforms,” he said when met after distributing dates and ‘bubur lambuk’ to RTM staff at the KKMM Kepayan Integrated Complex near here on Thursday.

The donation was received by Sabah Area Broadcasting Director Norain Haji Bakir who was accompanied by senior officials and RTM Sabah staff.

Bung Moktar who is also the Works Minister acknowledged the important role of the media, especially RTM in conveying the state government’s development agenda to the people at the grassroots level.

“The State Government has various policies and programs for the people such as information on the Sabah Development Corridor, State Budget and Sabah Maju Jaya (SMJ) halatuju 2021-2025 that the people at the grassroots level need to know about,” he said.

Bung Moktar pointed out that information related to the SMJ’s direction should be known by the people in the state as it will help the government deliver its planned agenda.

Meanwhile, Bung Moktar who is also Kinabatangan Member of Parliament as well as Lamag Assemblyman, said during the Covid-19 outbreak in the country, RTM played the role of broadcaster disseminating information about the latest development about the pandemic thus avoiding the spread of false news which confuses the people.

Commenting on the program, Bung Moktar said it was to show his appreciation to all KKMM staff who had to work in a challenging environment at this time as they are fasting and at the same time still facing the Covid-19 pandemic.
ends