Sunday, September 19
You are at:Home»News»Sarawak»Remarks on rewarding athletes ‘blown out of proportion’, says Abdul Karim 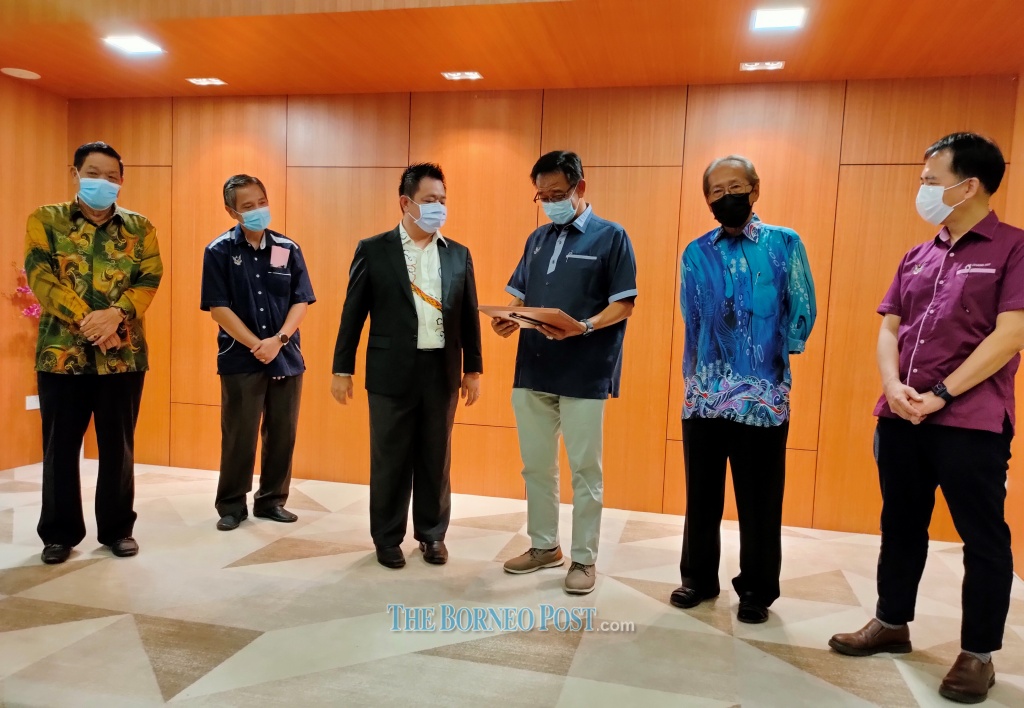 Abdul Karim (third right) takes a look at his token appreciation from Yong (third left), while (from right) Chang Kee, Gregory, Wong and Lau look on.

SIBU (May 8): Youth and Sports Minister Datuk Abdul Karim Rahman Hamzah has clarified that his recent statement on rewarding national diver Pandelela Rinong for securing Malaysia’s first-ever gold medal at the Fina Diving World Cup has been blown out of proportion by social media.

He was clarifying on his recent remarks where he said it was “not always good to reward an athlete each time he or she won something”, which had even resulted in threats to burn his house down.

He explained that the state government would want to see Pandelela and her family being assisted, as her family had also contributed to her success.

“That is what I am trying to say — when election is nearing, a lot of them (certain quarters) are turning it into a racial thing. It hurts me because I am not a racist. We will support whether the athlete is a Chinese or Dayak.

“But unfortunately, that is how it is — social media is like that. I have to accept it as it is freedom of expression. I even read one (post) on Facebook saying — better burn down Karim’s house.

“To me, that is already criminal intent but I am not going to lodge a police report. I hope that it (his remarks) can be clarified because there is no bad intention. I do not want Pandelela to think, ‘what did the Minister say?’. Even (former federal Youth and Sports Minister) Syed Saddiq probably did not read the whole text of what I had mentioned because he himself also said that he did not agree with me. But he has his own personal opinion,” lamented Abdul Karim.

He added that the state government had its own mechanisms on giving rewards to athletes who have obtained success in both the local and international arena.

“I am not in the position to announce which awards are to be accorded to an eligible athlete. It has to go through a committee which is responsible in giving out such awards,” he told a press conference after visiting the PLUX Incubation Hub here today.

Abdul Karim also revealed that he had received phone calls from people asking if the state would accord Pandelela, a two-time Olympic medallist, with a Datukship in recognition of her sporting achievements.

In response, he said that he was once an athlete and felt that the feeling of achievement ‘surpassed’ that of monetary award.

“The feeling of satisfaction when standing on the podium — you will understand the feeling if you are an athlete. Money is secondary,” he said, further stressing that the state government always supported the state’s athletes not just in monetary form but also awards.