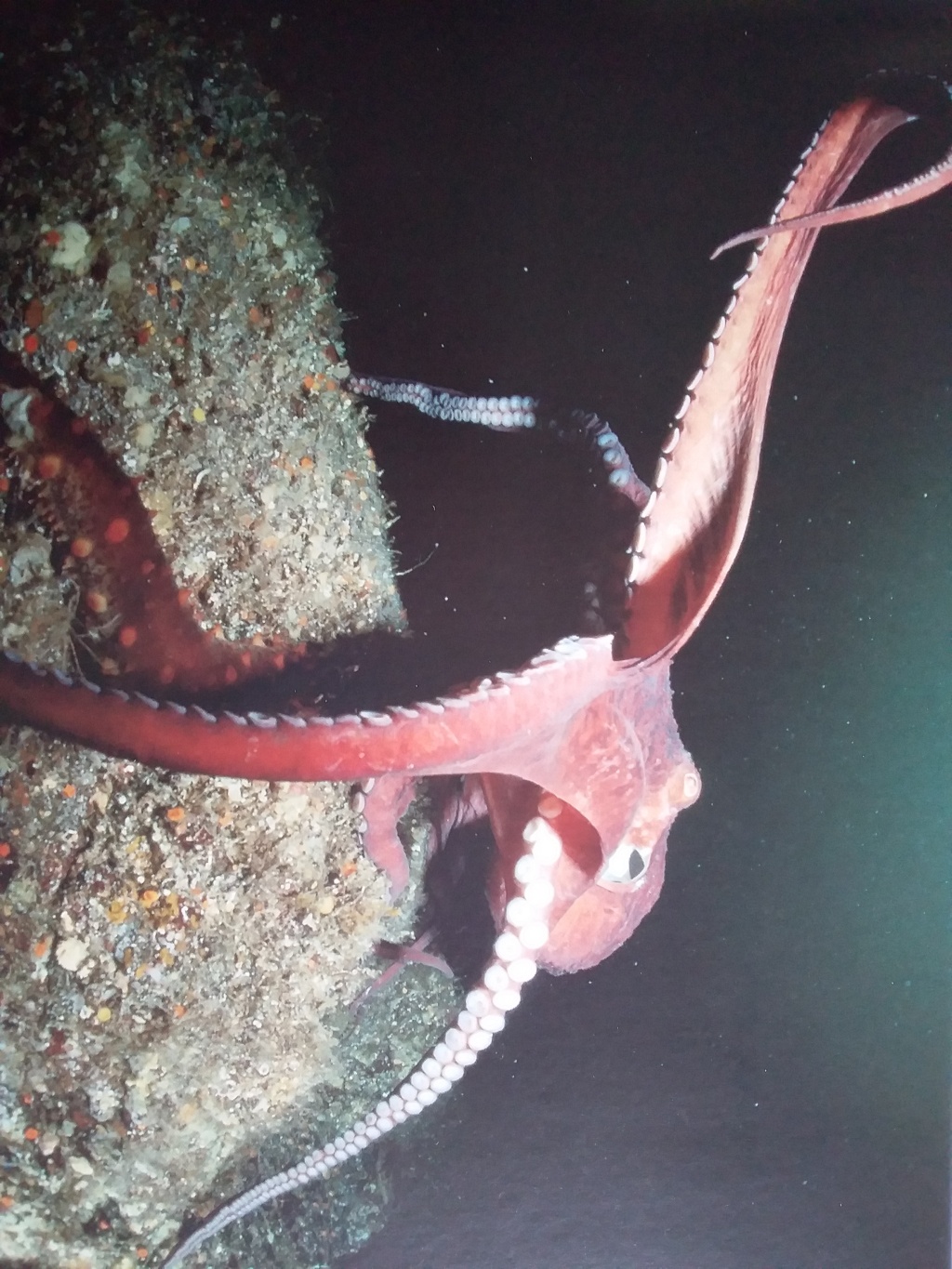 Some Giant Pacific Octopus have been caught weighing 71kg.

‘OCTOPUS’ as a word is as recent as the 18th century. It was first used by the English biologist William Elford Leach in 1818 and derived from the Greek ‘oktopous’, octa meaning eight and pous – feet. Octopoda consist of about 300 identified species ranging in size from the Giant Pacific octopus to the much smaller Mimic octopus. The largest Giant Pacific (Enteroctopus dolfleini) weighs up to 15kg with an arm span of 4.3 metres. Some have been caught weighing 71kg!

Today, octopus is a well appreciated delicacy in South East Asian seafood as well as being emblazoned on children’s seaside buckets, in children’s stories, and even in the title of a James Bond film ‘Octopussy’. In years past the octopus appeared as a monster from the deep or the ‘Kraken’ of Norwegian folk tales and the ‘Akkorokami’ in the mythology of the Japanese Ainu people. In Bahasa Malaysia it is called sukong kurita.

The fact that octopuses are found in both temperate and tropical waters suggests how well these species have adapted over the last 500 million years to their environmental conditions.

An octopus has interior and exterior parts with its bulbous and hollow mantle fixed to the back of its head which contains two gills on either side. It is linked to the external area by a syphon. Its mouth is located beneath its arms, exhibiting a very short, sharp chitinous beak. The arms, as flexible appendages, are connected by a web structure to its main body. Two of the arms, called ‘feet’, are used for walking along the sea floor. Most of its skin and, indeed, the whole of its body is made up of soft tissue, which allows it to lengthen, contract, and contort itself to the left or the right or simply to remain rigid. The inside of the arms are armed with circular, adhesive suckers allowing an octopus to manipulate objects or simply to anchor itself to rocks. Muscle contractions of the suckers allow it to attack or detach from objects. Its large eyes are on the top of its head.

Each of its tentacles has the ability to detect light for itself for when illuminated it will usually react by slithering into a darkened area. Its skin is covered in thousands of specialist cells known as chromatophores, which contain pigments of different colours. By contracting and expanding these cells, an octopus can mimic the colours and patterns of its habitat. Each tentacle operates independently until food is located. Two thirds of an octopus’s neurons appear to be located in its tentacles, the other third within its brain.

Octopuses have three hearts; a systemic heart circulates blood around its body and two brachial hearts that pump blood through each of its two gills. As an escape mechanism, an octopus has an ink sac with a gland attached which produces the ink to be stored in the sac. This sac sits alongside a funnel which expels the ink forcibly with a water jet. The main pigment in the ink is melanin, giving it its black or sepia colour.

After mating the female octopus attaches strings of between 10,000 and 70,000 minute fertilised eggs to rock crevices and overhangs and guards them for nearly five months (depending on the water temperature) before they hatch. The female works hard at aerating and cleaning the eggs, without feeding herself and dies soon after the eggs are hatched. The male, exhausted by the mating process, dies a few weeks after mating. It is thought that the short lifespan of octopuses is to prevent overpopulation in a limited environment, but the Giant Pacific octopus has been recoded to live up to five years. The hatchlings are paralarvae-like feeding on zooplankton and drift with the tidal currents before sinking to the seabed to begin their adult lives.

Most movements are confined to slow crawls along the seabed. Jet propulsion is the fastest form of movement whereby a jet of water is expelled from the body via a syphon. They propel themselves backwards with the head leading and the tentacles pointing backwards. This method is only used to escape from danger.

Bottom dwelling octopuses feed on worms, crustaceans, clams, and whelks whereas open ocean species feed mainly on prawns, fish, spider crabs, and crabs. They pounce on their prey and pull it towards their beaks there injecting their prey with a toxic, paralysing saliva before dragging the prey back to their dens in rock crevices for consumption.

Highly intelligent creatures, their behaviour is innate and instinctive for they have had no learning lessons from their departed parents at the time of their hatching. Often they have been seen to escape from aquariums and have even boarded fishing vessels and opened their holds in search of fish! One species collects discarded coconut shells and uses them to build dens.

All species of octopus are venomous but only the Blue-ringed octopus produces a venom, which is lethal to humans, leading to respiratory failure when accidently stepped upon or provoked. Bites are reported annually from Australian waters to the eastern Indo-Pacific Ocean. The major threats to octopuses are sharks and man in accidentally catching them in fishing nets. 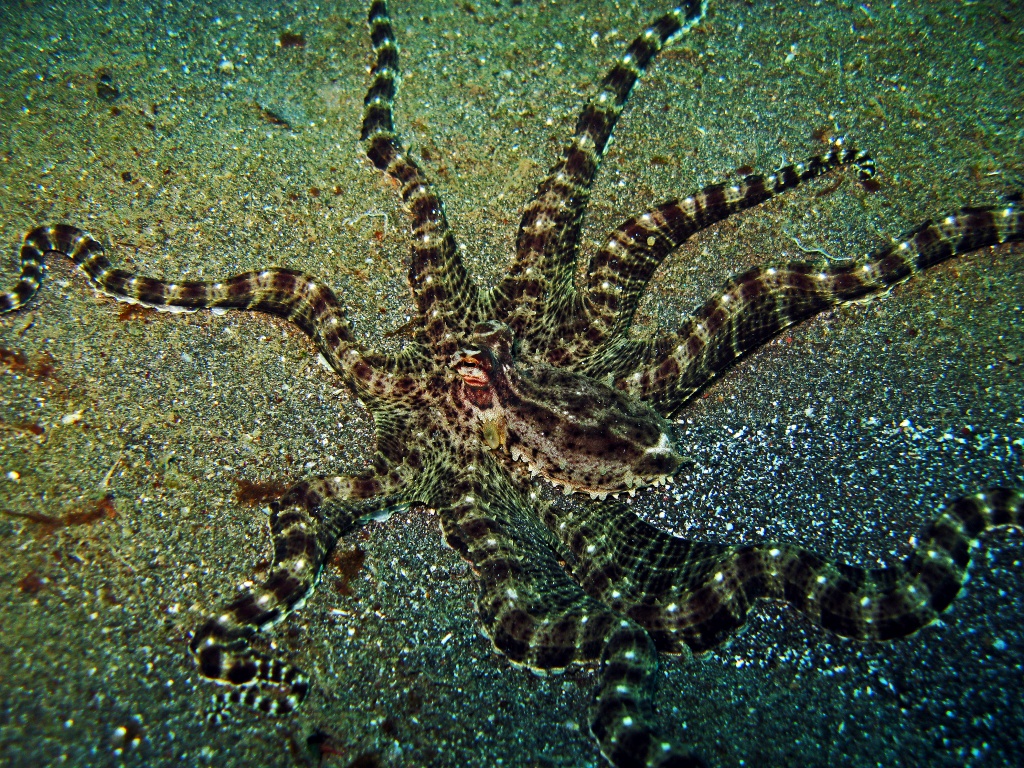 The Mimic Octopus was first identified only 23 years ago off the coast of Sulawesi, Indonesia.

Found in Malaysian and Indonesian waters, this species also uses its chromatophores to blend itself into its environment. It is mostly found in areas with cloudy sand and murky river estuarine waters at depths of less than 15 metres, blending into its sea floor environment with brownish beige colourings. It was first identified only 23 years ago off the coast of Sulawesi, Indonesia. Living in such shallow, muddy waters, its diet consists of small fish and crustaceans, foraging on these creatures by using its very thin and slender tentacles to catch its prey.

It is one of the smallest species of octopus reaching a total bodily length of almost 60cm, with very narrow tentacles – roughly that of a pencil at their widest points. It can rapidly change its colouration to a striped white and brown to frighten off predators by imitating poisonous and vicious threats to the invaders. Close observation has seen this species mimic lion fish by holding its arms out radially to mimic the fish’s spines, sea snakes, and eels by hiding six of its tentacles and trailing the other two behind it and, indeed, flatfish. In a more aggressive mood in search for crabs, it can mimic crab movements by stealthily creeping up to a crab before devouring it. Its name ‘Thauma’ is derived from the Greek meaning ‘marvel’ and it is most appropriately named, for it is indeed a marvel of sea floors.

I am not a great relisher of octopus or squid as food but I have enjoyed octopus mixed in with other fish in dishes of paella in Southern France and calamari in Sicily. May octopus and squid continue to be a delicacy and a much savoured dish in Sarawak and Sabah.

Previous ArticleIt’s a war, not just battles
Next Article Transport Services at stations, terminals listed in HIDE to continue operating