Saturday, September 25
You are at:Home»Features»What a buzz: saving Malaysia’s bees, one nest at a time 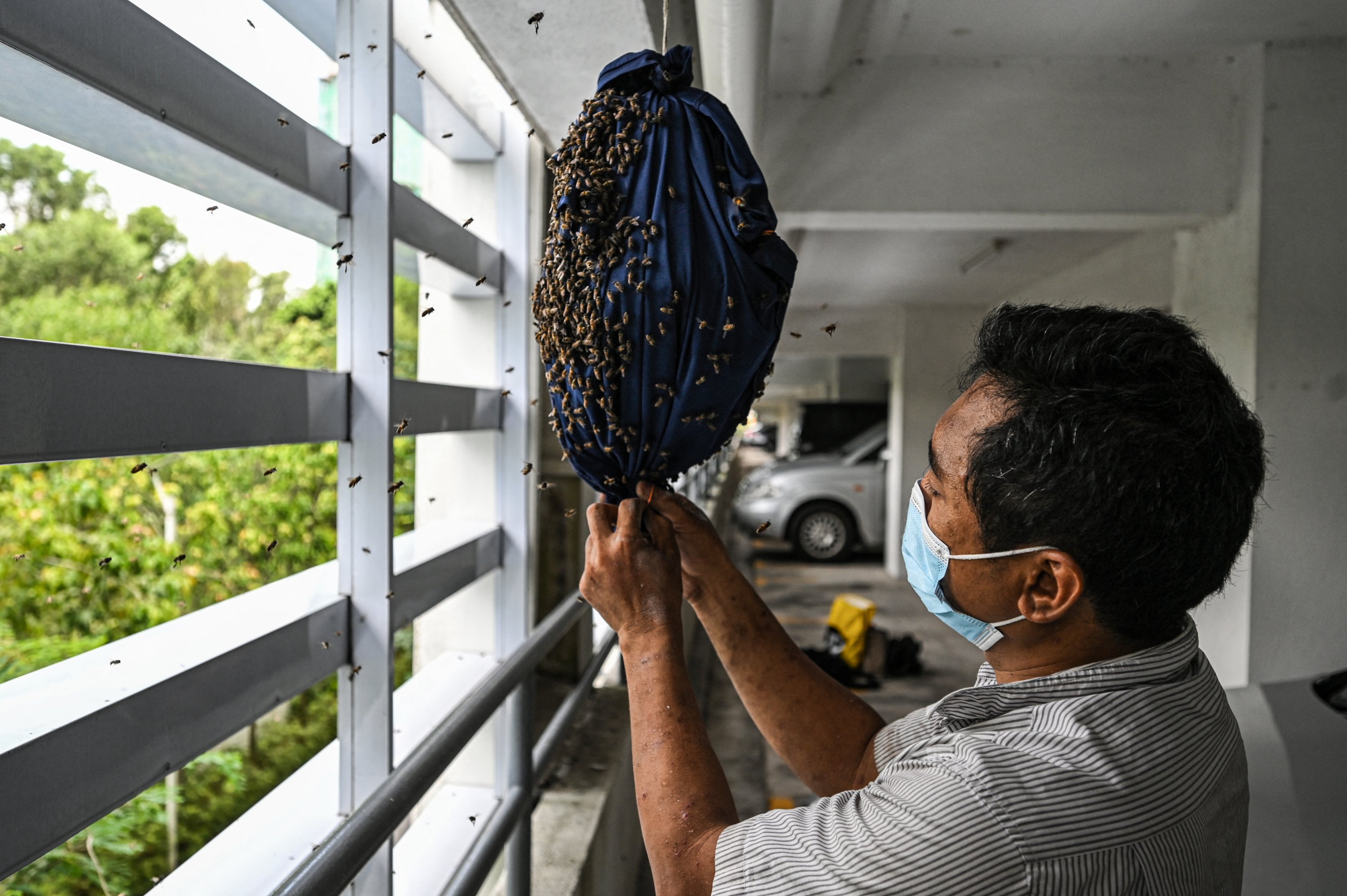 This picture taken on April 23, 2021 shows Ooi transferring bees to rescue them in the parking lot of an apartment building in Kuala Lumpur. — AFP photo

KUALA LUMPUR (May 10): Placing his bare hands into a swarm of thousands of bees, a Malaysian man uses his fingers to gently guide some of them into a rattan basket.

Ooi Leng Chye is a member of a group that saves bees and their nests when they are discovered in cities, seeking to prevent the creatures from being destroyed by those who view them as pests.

Bees play a vital role in ecosystems as pollinators of major crops, but their numbers have been falling rapidly due to habitat loss, pollution and pesticides.

The United Nations warns that 40 per cent of invertebrate pollinators — in particular bees and butterflies — risk global extinction.

In Malaysia, green activists founded the My Bee Savior Association to help stem the decline. 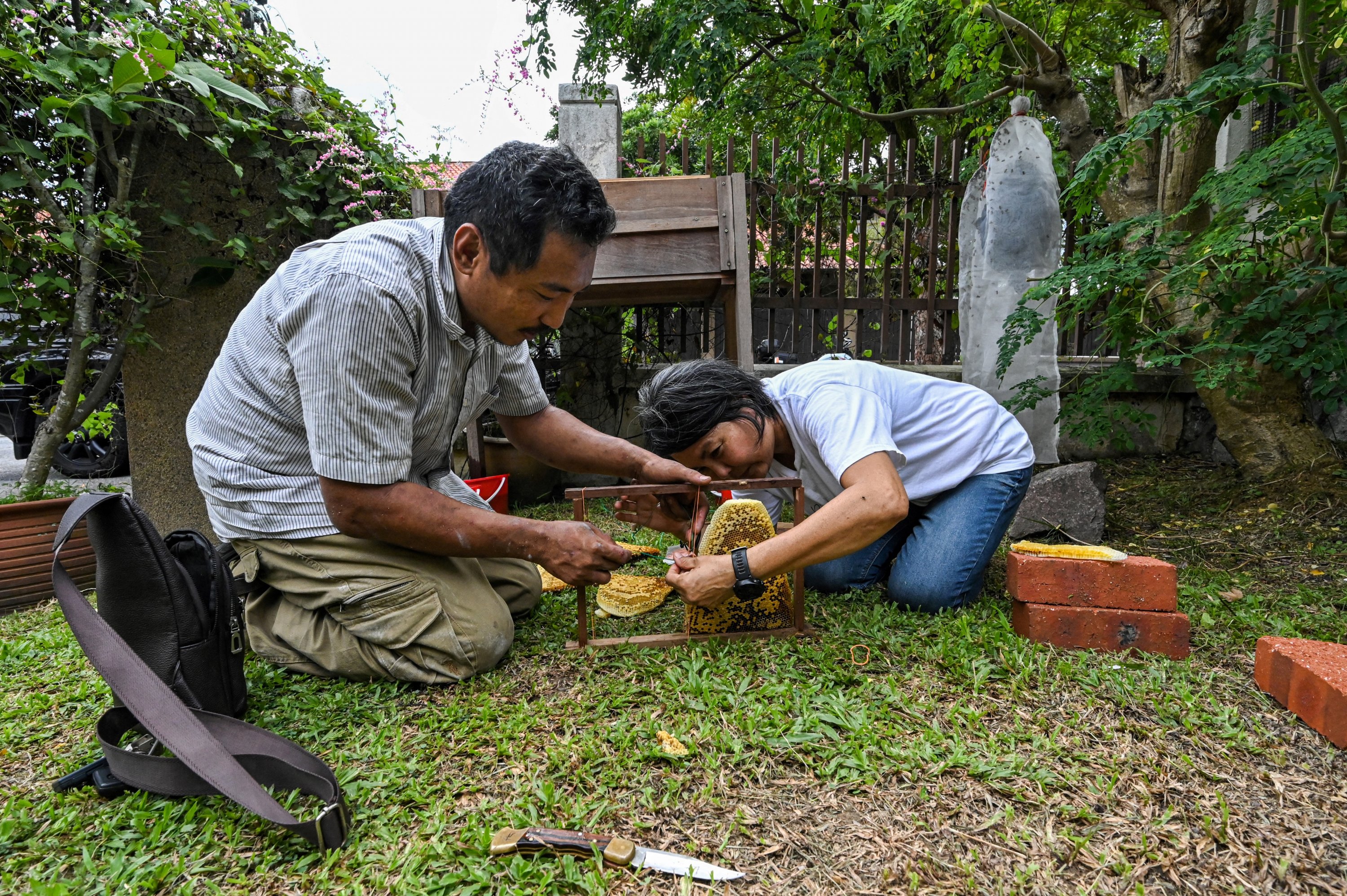 Oo (left) installs rescued honeycombs before placing bees into a Langstroth hive at a house in Kuala Lumpur. — AFP photo

When the group is tipped off about nests in areas such as under roofs and near trees, their volunteers try to carefully remove the bees and take them to new sites.

One of Ooi’s recent cases was in the car park of an apartment building in Kuala Lumpur, whose managers had reported a suspected nest.

In an empty space behind a wall under plasterboard, he and two other volunteers discovered half a dozen honeycombs and countless bees, a colony they believe had been there for months.

Wearing a short-sleeved shirt, trousers and sandals, Ooi — whose day job is as a software developer — was relaxed as he scooped up the bees with his hands into the basket.

“I’m not afraid of them,” the 48-year-old later told AFP as scores of bees buzzed around his uncovered face.

“Bees only attack out of self-defence. They won’t attack you for no reason — you just need to understand their behaviour.” 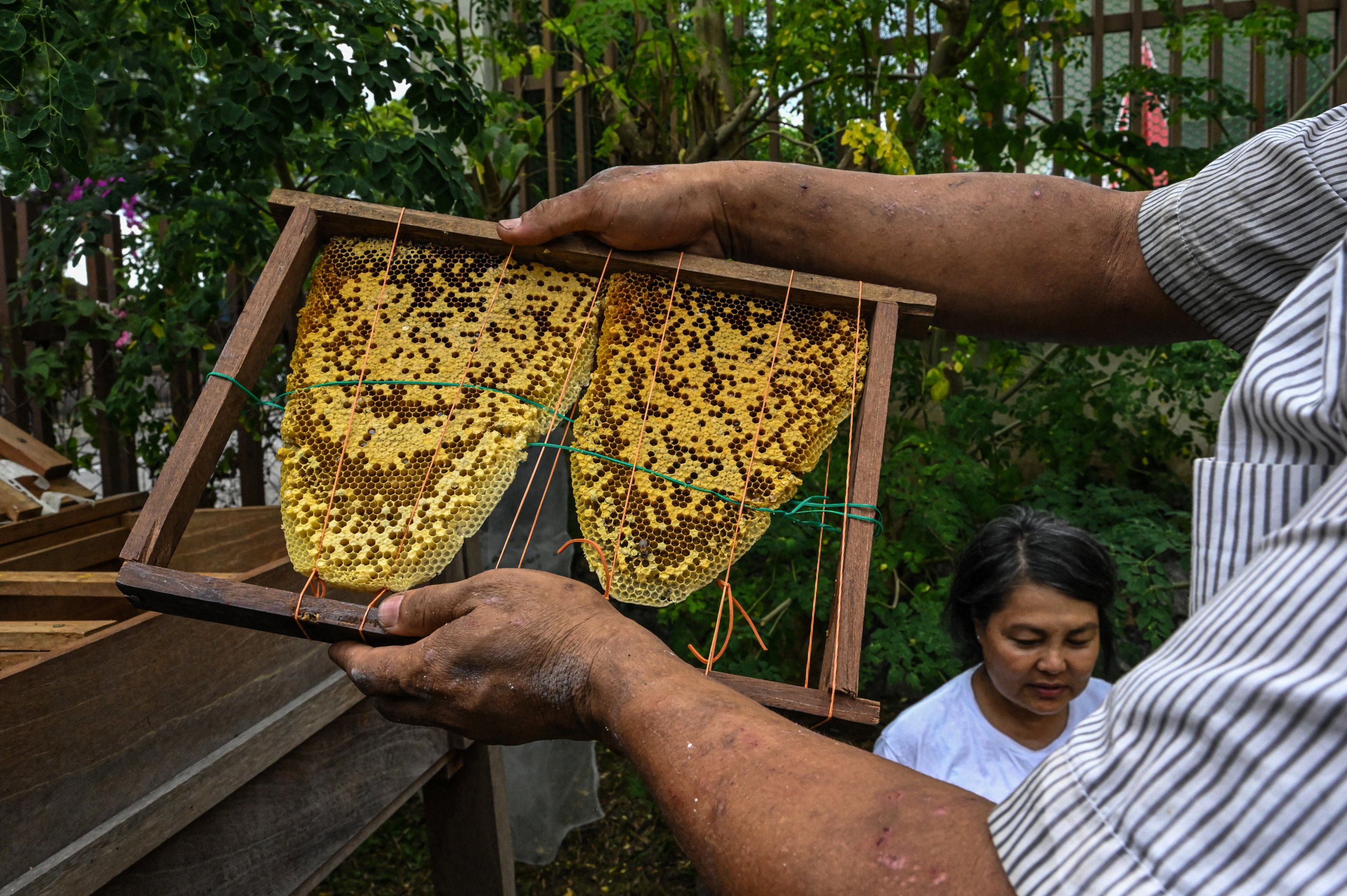 Ooi carries rescued honeycombs into a Langstroth hive at a house in Kuala Lumpur. — AFP photo

On this trip, Ooi’s arms were stung about four times but he shrugged off the pain as “pretty light”.

Though his arms are covered in stings from previous expeditions, he only puts on a beekeeper’s suit when facing the most aggressive of the insects.

“(With a suit), you won’t be able to be as gentle when scooping up the bees,” he said.

After nearly two hours, almost the entire nest is collected, with a basket of bees wrapped in a cloth and net, and the honeycomb inside plastic bags.

All are taken to another volunteer’s house, where the honeycomb and bees are placed inside a makeshift wooden box, which becomes their new hive.

The group’s volunteers can handle about 10 cases of nest discoveries every day nationwide, acting on tip-offs from officials and the public.

The traditional solution in Malaysia had been to call the fire brigade, which has been known to torch nests and their inhabitants to a crisp to dispose of them.

Part of My Bee Savior Association’s work is to try to convince official bodies such as the fire service to deal with bees in a different way, said group chairman Norowi Hamid.

Norowi helped set up the group after the mid-2000s when many colonies in the US and Europe were wiped out by a mysterious scourge called “colony collapse disorder”.

He said it remains a challenging task to convince Malaysians not to be afraid of them.

But he added that “if we do not manage the bees properly, then maybe one day (they) will not be here anymore.

“Then our future generations will curse us.” — AFP