Monday, August 15
You are at:Home»Columns»Kelp: the unsung hero of carbon dioxide absorption 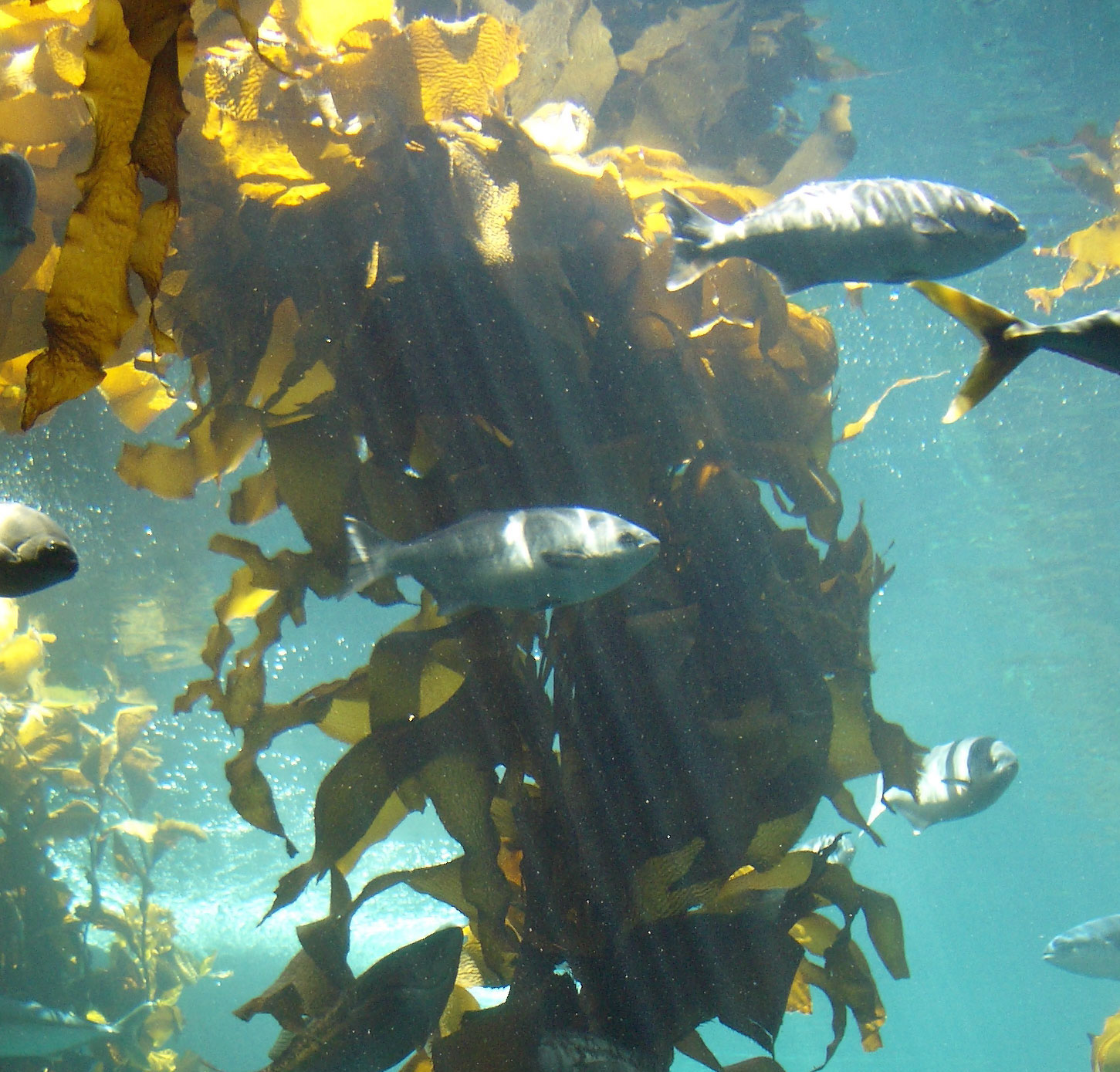 Kelp provides shelter for many species of marine life. — Photo by Stef Maruch

DEBATE exists amongst English etymologists as to the origin of the word kelp. It is thought to be derived from the Old English ‘cylp’ and is now used as a collective name for large seaweeds, which are burnt for the substances contained in their ashes.

I can well remember, as a lad, living in the very far southwest of England in West Cornwall, seeing farmers with their tractors and trailers collecting seaweed stranded on the high tide mark on beaches for ploughing into their fields in preparation for the sowing of early new potatoes. It was indeed a natural fertiliser for the well worked soils but collection was only limited to specific times each year. It was the carbon, sodium, and iodine embodied in the seaweed that produced such superb crops of potatoes. The same practice of collecting seaweed still exists today and also in Brittany, France, which is Cornwall’s Celtic ‘cousin’. The very memory of my family’s first dinner of the year with new potatoes forever lingers in my taste buds. They were something special!

Their growth, at between depths of 30 to 50 metres, is limited to the extent of sun light penetration for photosynthesis to occur. The fronds of the largest tropical species of the Giant Kelp (Macrocystis) can reach to the surface of the seas and grow as tall as trees on land at a much faster rate at 60cm a day. The fronds anchor themselves to rocks via their suckers and are buoyed upright by bladders.

As in their forest counterparts on land, seaweeds have distinctive vertical layers, each home to different assortments of plants and animals. In the darker bottommost layer of the seabed they provide shelter to amphipods, anemones, bristle worms, crustaceans, molluscs, starfish, and urchins. Filter feeders such as tubeworms and sea squirts also survive there. Higher up in the twilight zone live smaller seaweeds, which are dwarfed by a lack of sunlight and dense growths of red algae.

Very few creatures graze directly on living kelp as the seaweeds’ chemicals make them unpalatable. Instead, they feed on broken off fronds, which rot into an organic soup. Nearer to the surface, in the sunlit canopy, crustaceans such as the kelp crab together with molluscs and snails feed directly on the fronds.

Many fish species seek refuge amongst the fronds, which can grow so big that even grey whales can hide there. This, however, does not prevent big predators such as blue sharks, harbour seals, killer whales, and sea lions from seeking their prey.

The extent of these forests has been dwindling in the last 40 years at similar rates to the destruction of  tropical rainforests. Ninety-five per cent of the Tasmanian kelp forests have disappeared probably due to an explosion in the population of sea urchins, which voraciously feed on kelp. Usually these urchins are kept in check by lobsters and fish and, indeed, sea otters. Sadly, in the 19th century, sea otters were hunted down by fur traders, reducing their numbers from 20,000 to under 2,000 until they were protected by Wildlife Laws of 1911.

Overfishing and seabed trawling have reduced the fish stocks and ripped up the seafloor thus destroying the kelp beds. In the UK, more than 1,000 species of marine wildlife have been recorded in kelp habitats. Another problem emerges from rising winter sea temperatures as kelps are happiest in cool waters. A final danger to the seaweed forests is linked to pesticide runoff into rivers from agricultural holdings.

An irony lies in the fact that climate change is seeing a rise in water temperatures in temperate latitudes yet kelp is one of the most under-rated champions in the battle against climate change. Kelp absorbs vast amounts of carbon to fuel its growth. Worldwide, it is estimated that kelp forests absorb 600 million tonnes of carbon each year taking in 20 times more carbon dioxide from the atmosphere than the equivalent area of forested land. Not only does kelp absorb carbon dioxide and convert it into new growth but when the seaweed dies, its fronds sink to the seabed and become ‘locked up’ in the sediments creating a carbon store for millions of years.

Besides kelp’s properties of the de-acidification of seawater from carbonic acid, it pumps out oxygen through photosynthesis as well as helping clean water by stabilising sediment on the seabed.

Kelp forests play a valuable role in coastal defences against storm damage, cutting down coastal erosion by absorbing up to 70 per cent of wave energy, often to the destruction of the kelp fronds. Owing to climate change, sadly, storms are now more frequent and stronger thus reducing kelp forest areas.

Much of ocean life depends upon the circulation of cold nutrient-rich water from the depths to the shallows. As climate change warms up the surface of the sea, it prevents this circulation thus starving seaweed of nutrients and creating a layer of ‘dead’ water. An American physicist, Brian Van Herzen, has invented a way for the circulation of nutrients in the creation of carbon absorbing kelp forests at a scale large enough to deal with climate change. His invention revolves around a lattice frame submerged to 25 metres below sea level and connected to surface buoys. The buoys utilise wave energy to power a pump that draws cold water up from the depths thus feeding nutrients to seaweed growing on the platform.

As the seaweed grows, it creates an artificial habitat for fish. We could well see seaweed farming, helping the economy of local fishing communities, restoring marine life, and reducing the impact of climate change. Farmed kelp can be converted into methane gas and burned as a sustainable substitute for natural gas for electricity generation.

Cattle-rearing, as we know, produces over 10 per cent of global gas emissions. Much of this is due to cows that emit vast quantities of methane. Recent research has revealed that it is possible to alter cattle feed by introducing seaweed in their diet to make them belch less whilst chewing the cud. Cattle are by nature the most flatulent of all animal species! Feeding products of seaweed into the cattle’s diet during the digestion process interferes with an enzyme used by microbes to make methane. The outcome of a slight change of diet resulted in cattle belching hydrogen as opposed to methane. In South East Asia and globally, kelp has many commercial uses in the manufacture of pharmaceuticals and food. The dark green wrappings on some types of sushi are made of nori, which is a dried and baked tasty seaweed.

We owe much to this form of marine algae and especially to its immense ability to absorb atmospheric carbon dioxide thus assisting us to battle climate change. The creation of more marine protection parks around our coastlines, where seabed deep trawling is prohibited, would go a long way in preserving this very special commodity. Next time you visit a beach spare a thought for the brown bladderwort fronds washed ashore at high tide and thank them for preserving us.