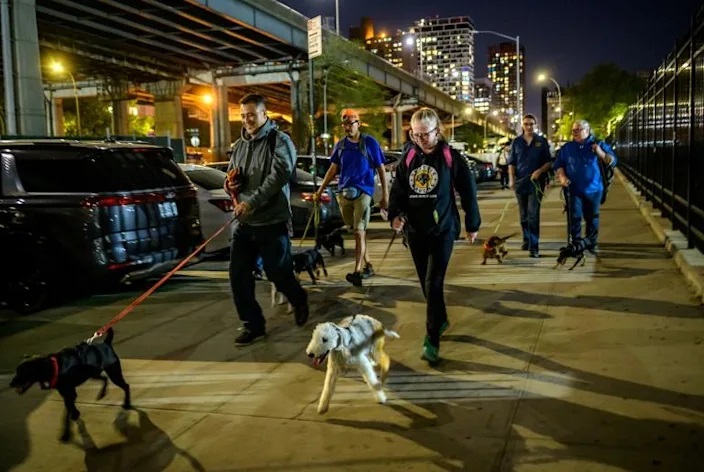 Late on a Friday night, eight dog enthusiasts and their pet pooches prowl several dark alleys in New York’s Lower East Side with one mission: to hunt and kill as many rats as possible.

The dogs, mostly terriers, pant and strain at their leashes before diving into trash bags and emerging seconds later with a convulsing rodent between their teeth.

New York’s furry rodents are notorious. Legend has it there are as many rats in the city as humans (some eight million), with public-health officials regularly testing new techniques to control the population, including placing dry ice in rat burrows to asphyxiate them.

That hasn’t deterred the men and women volunteers of R.A.T.S. and their dogs. They have been chasing vermin for about 30 years and have maintained their nocturnal meets during the pandemic, albeit slightly less regularly.

Shorter-legged dogs such as Jagdterriers flush out rodents from piles of garbage, construction debris and bushes while faster, longer-legged dogs like Bedlingtons stand back, ready to pounce.

“It’s a bit like X-Men,” says Alex Middleton, a 36-year-old dog trainer. “Each dog has its own superpower.”

“Go on Rommel, get it,” the group shouts, as the dog thrashes around in the rubbish. Moments later, following several squeaks, Rommel, blood dripping from his mouth, appears with the rat, and the hunters cheer.

The rat catchers pick up the carcasses by their tails and deposit them in a single-strap fabric bag. Its contents will be emptied and counted at the end of the night.

“The newer members share carrying the bag,” said 28-year-old Sophia Pierce. “It’s heavy — do you want to feel it?”

Pierce, a dog groomer who joined the hunts with her wirehaired dachshund Lita a year ago, is unperturbed by the slaughter.

“You just kind of get used to it. I think the people that just kind of walk up to it get more squeamish than we do,” she said.

Reynolds, a dog-show judge, was in a park in New Jersey in the 1990s when his pooches started killing rats during a show there. The park attendant asked if they would come back to help, and R.A.T.S. was born.

R.A.T.S. answers calls and Facebook messages from rat-troubled residents who are usually most grateful for the group’s swift and effective response.

The city government doesn’t recommend the practice, citing a risk of dogs catching a serious disease known as leptospirosis. But city officials don’t stop the group, because the catchers are not violating its health code.

“The occasional beer can has been thrown at us for making too much noise, but we’ve got a warm welcome most places we go,” said Reynolds.

Kayla Callender said she was “hyped” earlier this month when she saw the hunters in her Manhattan neighborhood near the Williamsburg bridge.

“They make a big difference, for sure. I appreciate it,” she told AFP.

Not everyone feels the same.

But for Reynolds, death-by-terrier is no crueler than by rat poison or sticky traps.

Michael Parsons, a rat expert at Fordham University, likens the hunts to putting “a Band-Aid on cancer.” Reducing food waste and refuse is more effective for controlling the rat population, he said.

But while saying that the group doesn’t make a “heavy impression” on New York’s rodent population, he added that it does “contribute something to the community.”

The group sends DNA samples to universities conducting research and provides frozen rats for falcons to eat at a nearby avian rehabilitation center.

The volunteers say their enjoyment comes from seeing their dogs have fun developing predatory skills.

“We do rat control but that’s not really why we’re here,” said Reynolds. “We’re here for the dogs, to work the dogs.”

Kim McCormick, a 58-year-old paramedic who makes six-hour round trips from Connecticut to take part, also enjoys the camaraderie among owners.

After three hours of stalking, Greg Conception, 54, lines up the night’s haul on the ground. He counts 26 in total.

“Usually we get about 40. This is a little light. We’re obviously coming here too often,” he said. – AFP