Friday, June 25
You are at:Home»Features»Armed and ready for any eventuality 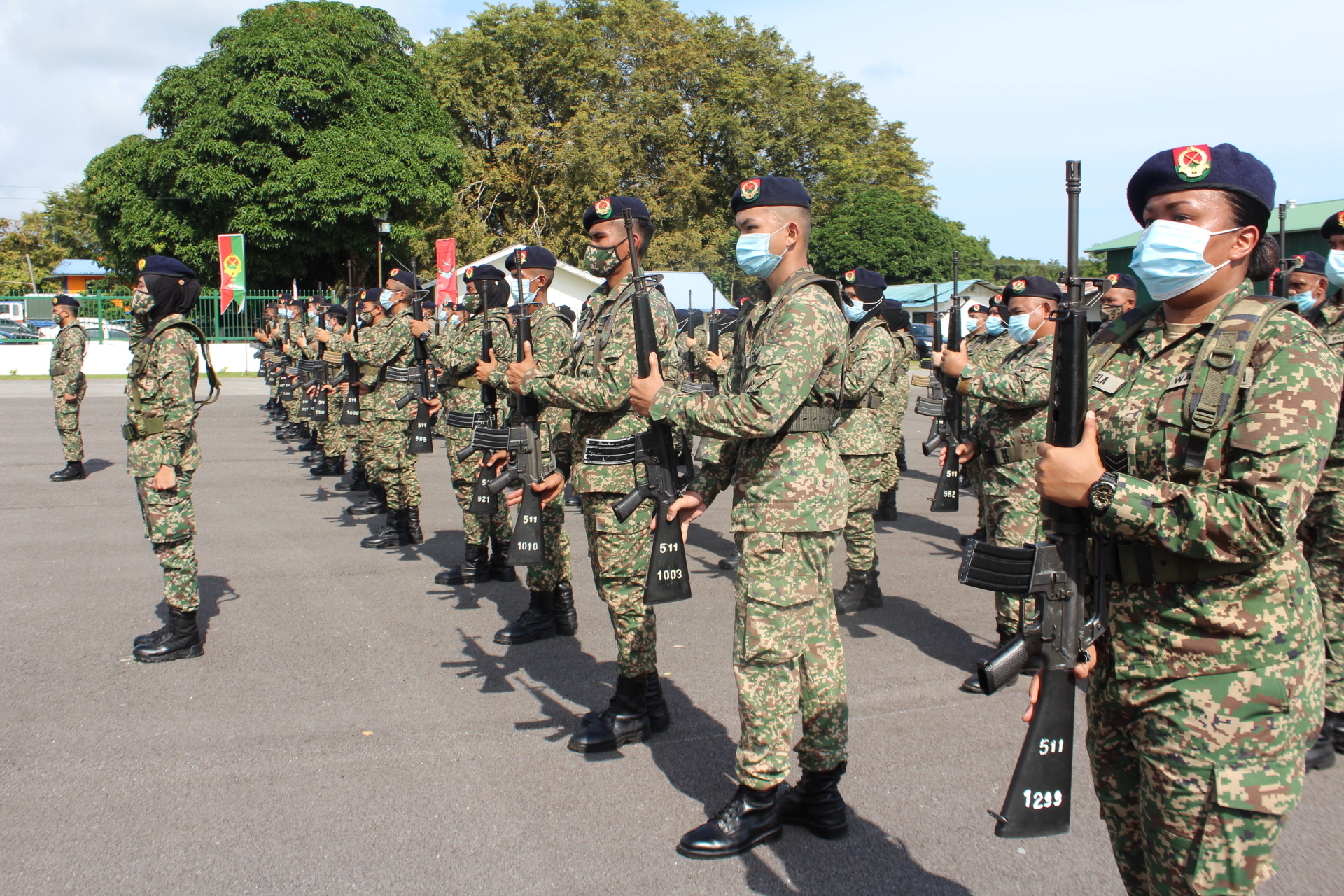 Every Regiment 511 recruit must go through rigorous training.

THE mobilisation of ‘Regimen 511 Askar Wataniah’ (Regiment 511 of the Territorial Army) from Kuching Ria Camp to Sibu on Feb 4 this year was regarded as a new dimension for all six officers and their 120 troops.

The move was meant to assist the Ninth Infantry Brigade in implementing the various phases of the Movement Control Order (MCO) under ‘Op Penawar’, covering the brigade’s area of responsibility (KTJ).

Regiment 511 was the first troop deployed outside the KTJ under the Third Infantry Brigade’s coverage, and they comprised men selected from the battalions in Kuching, Sematan and even as far as Sri Aman.

They were tasked with assisting members of the Ninth Infantry Brigade conduct roadblocks and other standard operating procedures (SOP)-compliance inspections.

Commander of Regiment 511 of the Territorial Army, Brig-Gen Abang Mohamad Abang Marzuki, said the mobilisation was necessary in view of the sudden spike in the number of positive Covid-19 cases in Sibu recorded in January 2021.

“This deployment is proof of Regiment 511’s high-level ability and readiness for any mission at any time.

“I am very proud of my men, who are ever willing to be deployed in times of the pandemic and assist in the implementation of MCO is Sibu,” he told thesundaypost. 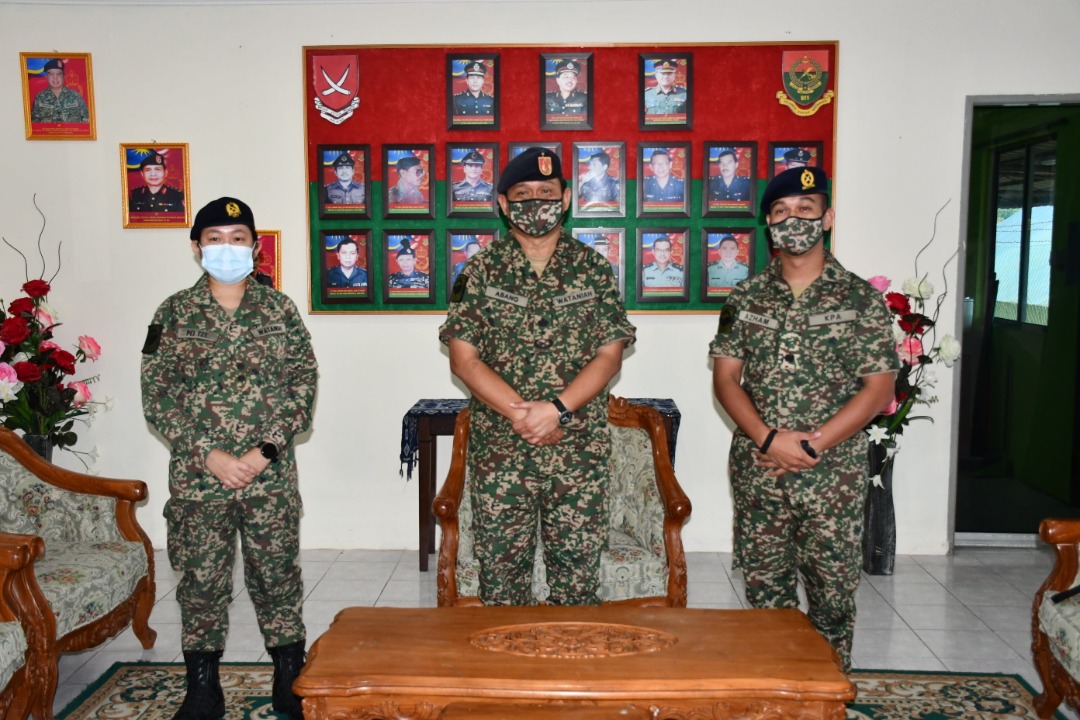 Abang Mohamad believed that the presence of his Regiment 511 troops had helped alleviate the burden of army men in Sibu, who not only had to conduct Op Penawar but also had to look after and safeguard the nations’s border.

“Apart from the Ninth Infantry Brigade, our regiment had also joined hands with the Royal Malaysia Police (PDRM) in enforcing the MCO in Sibu.

“The number of Covid-19 cases in Sibu, at that point of time, was so overwhelming that we had to assist our fellow troops. 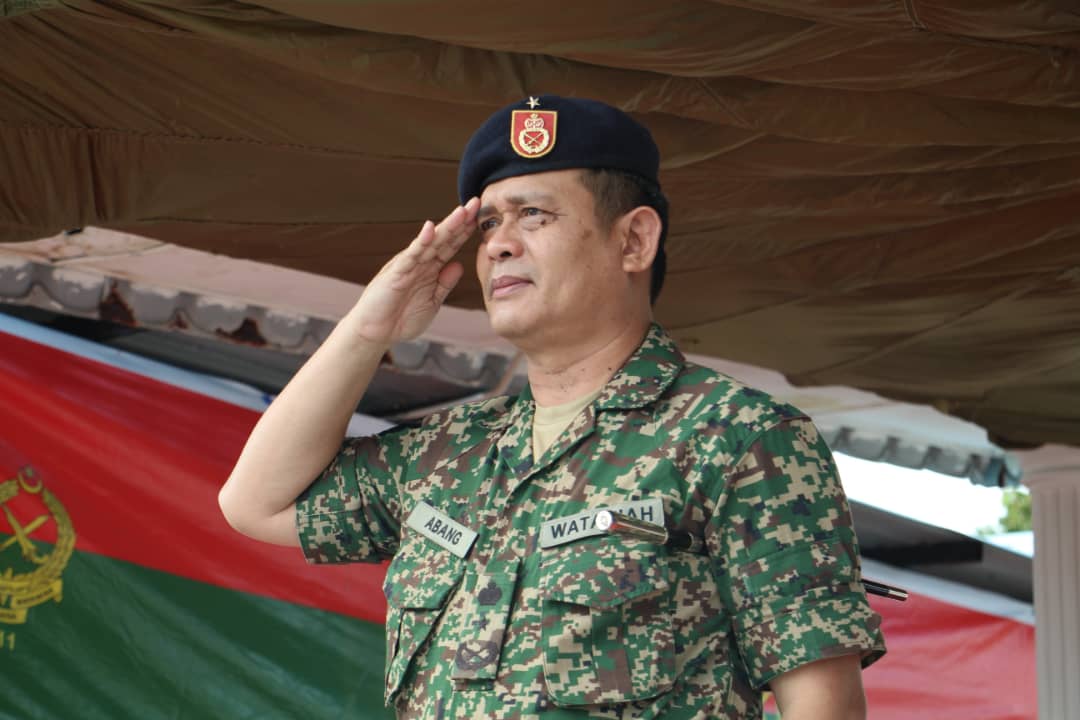 “Their involvement in ‘Op Penawar’ is like a ‘Deployment Training for Service (LKUB) where only qualified volunteers, officers and personnel would be selected. However, ‘Op Penawar’ is an actual operation for the regiment; it is not training. — Brig-Gen Abang Mohamad Abang Marzuki, Commander of Regiment 511 of the Territorial Army

“Bear in mind that there was no severe lack in manpower; the thing was that their (Ninth Infantry Brigade’s) main duty was to guard the country’s borders under ‘Op Awas’.

“So, the presence of the Regiment 511 troops was to supplement the force in other areas such as manning roadblocks, keeping watch over longhouses in Sibu that were under lockdown, deploying our men to Kapit, handling the Mobile Patrol Vehicle (MPV) unit, and assisting the brigade in ‘Op Penawar’ meant to curb Covid-19 spread,” he said.

Abang Mohamad said under their deployment in Sibu, the Regiment 511 troops were under the command of the Ninth Infantry Brigade – their duties were determined by the brigade.

“Their involvement in ‘Op Penawar’ is like a ‘Deployment Training for Service (LKUB) where only qualified volunteers, officers and personnel would be selected.

“However, ‘Op Penawar’ is an actual operation for the regiment; it is not training.

“For actual operations, our officers and personnel would be paid allowances based on their ranks and the number of days of their deployment,” he said. 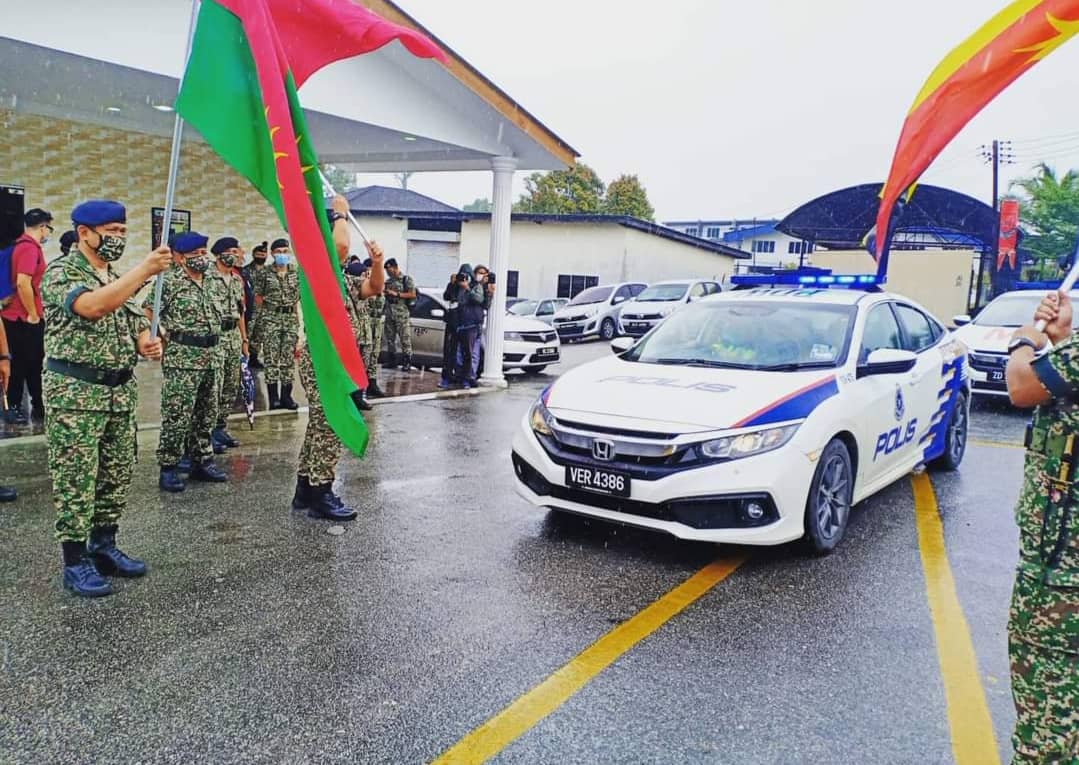 (From left) Abang Mohamad and Third Infantry Brigade Commander, Brig-Gen Datuk Azhar Ahmad (partly hidden by flag) jointly flagging off the convoy of Regiment 511, set for their deployment in Sibu.

Abang Mohamad said being a component of the Malaysian Army, every member of Regiment 511 of Territorial Army served a crucial role in upholding and defending the nation’s security and sovereignty.

“Each and every one of our volunteers, officers and personnel is well-trained, even for a war.

“In times of peace, the focus would be on border-control operations.

“Many people do not know that our border spans a distance of more than 1,000km; the longest in Malaysia, I’d say.

“In between, the regiment would undertake other duties such as manning roadblocks, managing disaster situations such as floods and landslides, as well as handling other assignments. I believed it is indeed a relief for the Malaysian Army to have the support from the 510 and 511 regiments.”

It is reported that at present, Regiment 511 of the Territorial Army has over 2,400 officers and personnel based in KTJs from Tanjong Datu right up to Saratok.

Narrating the history of the regiment, Abang Mohamad said the infantry units formerly consisted of two series of reservists; the 300 Series and the 500 Series – Regiment 511 falls under the 500 Series.

The 500 Series were known as ‘reserve volunteers’, based in major towns and cities throughout the country, and their mission was to support the reserve units – about the same as the battalions under the Royal Malay Regiment and the Royal Ranger Regiment.

In Malaysia, there are 16 regiments organised into a regimental headquarters and infantry battalions, with bases all across Kuala Lumpur, Selangor, Negeri Sembilan, Melaka, Johor, Pahang, Kelantan, Perak, Penang, Kedah, Perlis, Sabah and Sarawak. 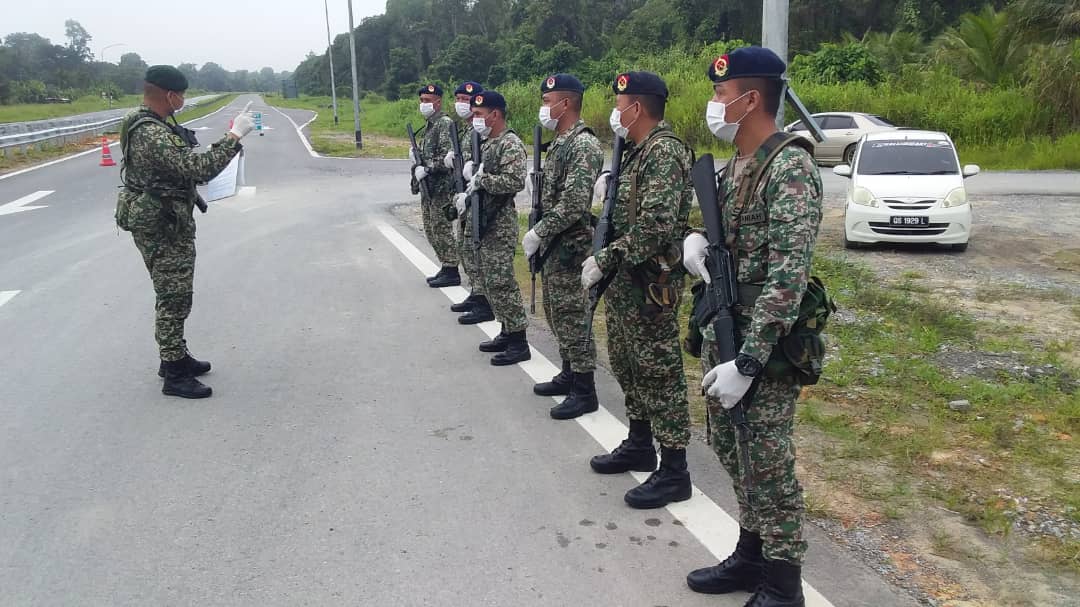 Members of Regiment 511 being briefed prior to being stationed at one of the roadblocks in Sibu.

Both regiments are under the patronage of Chief Minister of Sarawak Datuk Patinggi Abang Johari Tun Openg.

In addition, State Secretary Datuk Amar Jaul Samion and Deputy State Secretary Dato Sri Mohamad Abu Bakar Marzuki are the respective chairman and deputy chairman of the Territorial Army Support Committee (Japaw). It is known that every state has its own Japaw, which can be regarded as the ‘board of directors’ of the regiments. 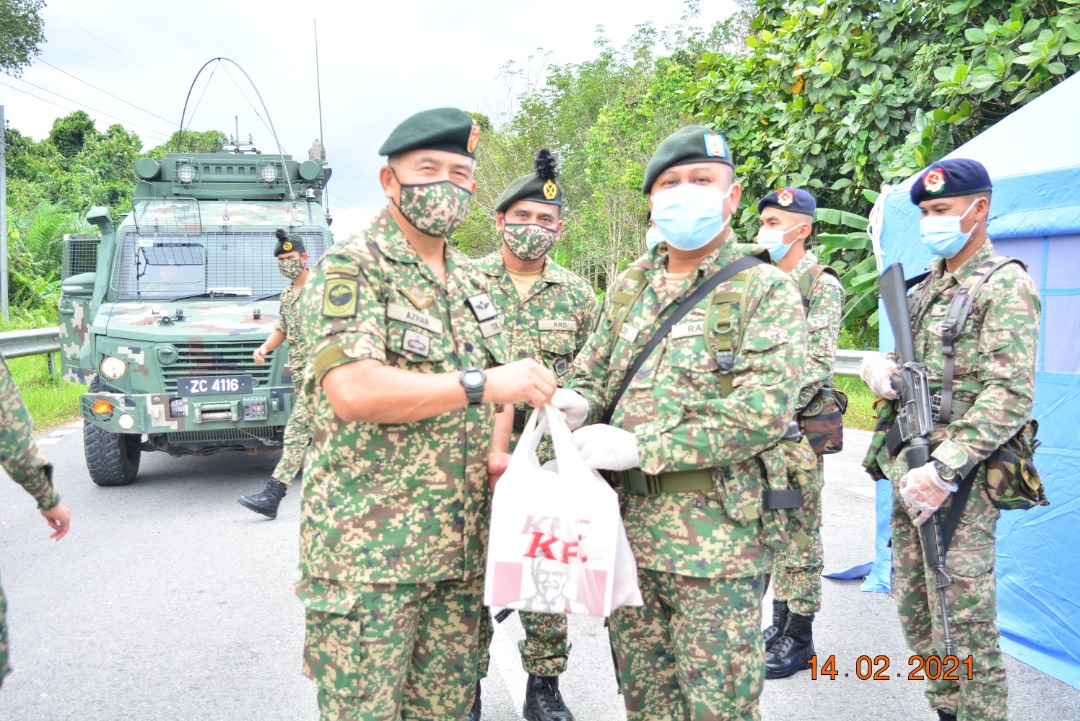 According to Abang Mohamad, the majority of the volunteers in Regiment 511 are locals.

“They consist of government servants, corporate staff members, those from the working class, and also farmers, fishermen, and contractors – in short, they are members of the public.”

He said the word ‘Wataniah’ came from ‘watan’, meaning ‘local’ in Malay.

“Whenever the Armed Forces are on their assignments at the border, the ‘anak watan’ (locals) would oversee camp management, local duties and also be on standby during emergencies.”

Adding on, Abang Mohamad called upon more non-Bumiputeras to join Regiment 511 – and also the Territorial Army, for that matter.

“In particular, we want to encourage the Chinese to join us, and they should.

“Currently, we do not have many Chinese in our troop, and we welcome more to come in.

“If I could get 30 to 50 people from the Chinese community to join us, it would make a lot of difference.”
Financial-wise, Abang Mohamad said the state government had been very generous to the regiment.

“This is the second year that we are being supported by the state government, and I think the support has never been like this before.”

Back on recruitment, he said this could be done via the link.

“Any new recruit, be it an ordinary personnel or an officer, must go through strict vetting.

“You must not have any police case, be it regarding drugs or other criminal activities.

“In terms of physical requirements, they are not too strict, but the most important thing is once you are accepted to Regiment 511, you would undergo various training and exercises and after that, you must be readily available at any point of time should the need arise.”

Abang Mohamad also said the beauty of becoming a member, volunteer, officer or personnel of Regiment 511, was that he would be placed in areas that would match his expertise.

“Say you’re an engineer by profession, you’d be assigned to duties related to dams (hydroelectricity), or ports.”

On his hopes for Regiment 511, Abang Mohamad said perhaps the state government could consider providing them transportation assets like trucks and coaches, and also infrastructures in certain areas.

“Having our own fleet of transport would be an advantage for us if we need to be deployed to disaster-struck places; this way, we would not have to rent these heavy vehicles, which would cost more money.

“At the same time, some of our logistics needs have yet to be completed, so we need funds to set up a few centres for our members, volunteers, officers and personnel,” he added.