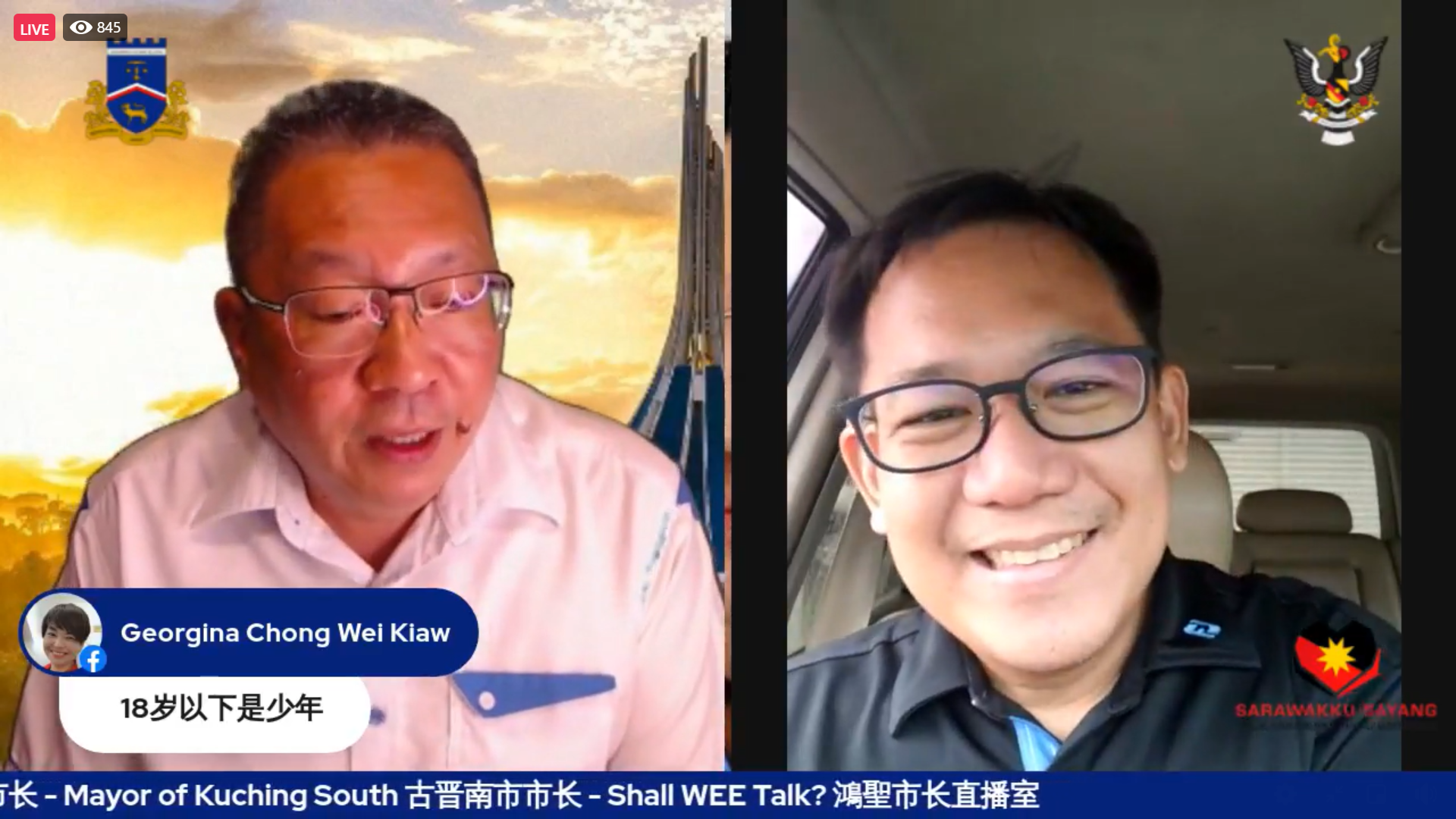 Dr Cheong (right) interacts with Wee during the Facebook Live session, hosted by the mayor.

KUCHING (May 30): Volunteers are needed urgently to help handle the operations at the Covid-19 vaccination centre (PPV) in Borneo Convention Centre Kuching (BCCK) upon its opening next month.

“The PPV at BCCK will have a trial run on June 3; its operations will officially begin on June 7. Volunteers will be needed to assist the public, especially senior citizens, coming for their vaccine appointment,” said Dr Cheong, who is also tasked with managing the PPV.

He said the volunteers would be stationed at the PPV for at least three months, until Aug 31, as the BCCK had been designated as the vaccination centre for the recipients of the AstraZeneca vaccine.

Adding on, Dr Cheong said civil servants could volunteer to help out at the PPV, provided that they had obtained recorded permission from their respective heads of department.

It is stated that the Kuching South City Council (MBKS) is assisting Dr Cheong in seeking the volunteers for PPV BCCK – those interested could contact MBKS administrative officer Ting Tiew Lik via 010-922 3705.

On a related note, Dr Cheong said those who had been to Covid-19 high-risk areas or had close contact with positive cases would not be charged for undergoing swab tests at the OSC in Dewan Masyarakat Kuching.

Sick individuals or those who exhibited symptoms would also be given free testing, he added.

“My advice is anyone coming for the swab-test must bring along their identity cards, a pen, and also a bottle of water. Usually, you would be notified within 24 hours if you’re detected to be Covid-19 positive or not; alternatively, you could call our hotline to check your results.”

Additionally, a notification would appear on one’s MySejahtera app if tested positive.

On the other hand, Dr Cheong said those coming for swab-test at the OSC as part of the inter-district or inter-zone travelling requirements, would be charged RM150 per person.

“Upon being tested positive, please have your spare clothes ready to be brought to the quarantine centre.

Our protocol also requires the patient to inform us on his or her close contacts over the past 14 days, as part of contact-tracing.”

He added that patients would also be recommended to bring along their own blankets, towels and medicines, if any, to the centre.

On the quarantine order, Dr Cheong said it would only be issued to a patient once an investigation had been carried out and the individual concerned had been confirmed to be a close-contact of a Covid-19 positive patient.

“We have also discovered cases where there were people who abused the quarantine order and thus, an investigation would need to be carried out first beforehand.

“Members of the public are urged to self-isolate at home when their swab-test results are not out yet.”
Dr Cheong said a person under quarantine order would then be given food aid, prepared by the Welfare Department.

“If you have been to Covid-19 high-risk area, taking the swab-test once should suffice.

“However, if you have very close contact with a positive patient, such as sitting next to each other, then maybe you could undergo two swab-tests, with the second taking place on the 10th day from the first test.”

For those who had been vaccinated, Dr Cheong stressed they were not completely shielded from Covid-19 – they could still get infected, but the chances of experiencing severe symptoms should be greatly reduced.

“After your second dose of the vaccine, the immune system in your body would need about 28 days to be built up to fight against the coronavirus. Regardless, always make sure to follow the recommended hygiene measures strictly, such as washing hands regularly.”

Dr Cheong said Kuching itself had about 570,000 people aged 18 and above, who were eligible for Covid-19 vaccination.

According to him, those experiencing depression, stroke, diabetes, heart illnesses and high blood pressure, breastfeeding mothers and pregnant woman are safe to undergo vaccination, while those tested positive for Covid-19 could only be administered with the jab after having recovered for three months.

“On the other hand, cancer patients undergoing chemotherapy and those with Stevens-Johnson syndrome should not be vaccinated for the time being.”

Also, patient suffering from serious illnesses could only be vaccinated at a hospital, instead of receiving the jab at a PPV, added Dr Cheong.