Wednesday, August 4
You are at:Home»Features»Tasty treats from decades-old old stalls 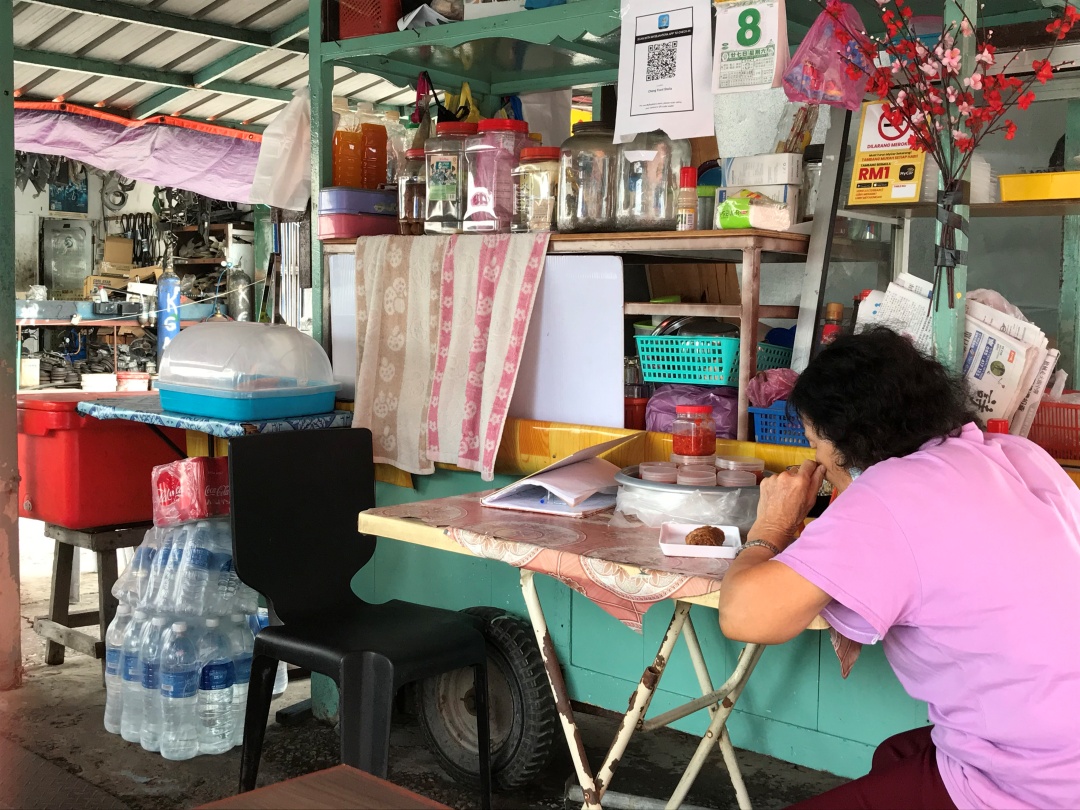 The old pushcart used by Madam Chong’s father-in-low has become the main work table at the family-run box stall.

“THAT was our favourite ‘ice kacang’ place when we were young,” said Encik Mat, referring to a site in Kampong Wireless where hawkers, back during his childhood days, would park their carts, set up their stalls and sell a variety of local culinary treats.

The fisherman said when he was just a little boy, he used to cycle around the village with just some coins in his pocket.

His family moved to the village around 60 years ago, at a plot of land near the mosque.

Mat, now in his 60s, said at the time, there were no concrete shophouses at Wireless Road.

It was still a rustic scene then, filled with village houses up to the neighbouring Kampung Dagang (this village no longer exists) after the main Miri shophouses.

“Sungai Merbau was still a stream in those days. Our mosque was considered quite new in the 1950s, and the Rumah Sakai stood just opposite – if I’m not wrong.

“People from the ‘ulu’ (upriver) would come down and visit Miri – some via ‘motor launches’ (small military vessels) from Niah and Sibuti, which would dock at the wharf in Miri (near where Miri Times Square is today).

“I remember this very well because they (those from the ‘ulu’) would bring lots of fruits for sale. “In return, they would go back home with a lot of stuff procured from the Chinese shops.

“I heard some of them even bought bird’s nests.”

Mat said his family and some relatives moved to Kampung Wireless after his father had found a job with Shell, like many others who had moved out from Mukah, Sarikei and even from Sri Aman.

They helped one another in building their own wooden houses upon arrival at Kampung Wireless, located at Miri River.

“Life was good in those days; very carefree. Those who had boats went fishing, and those employed by Shell earned well. We’re quite happy as kids in the 1950s,” Mat reminisced.

“Today, all the nice ‘Apek’ (a local affectionate term for ‘old Chinese uncles’) are no longer around; their daughters-in-law and their grandchildren are now in charge of the trading stalls.

“It’s nice to have a corner drinks stall now, where don’t have to spend much and it is safe too. “More and more women are doing business now,” he observed.

Despite its rather modern name, Kampung Wireless is regarded as the oldest traditional village in Miri.

The name derived from a telecommunications tower, which was erected right in the centre of this fishermen’s village during the British colonial rule in the 1950s.

‘A noodle stall under a jackfruit tree’ 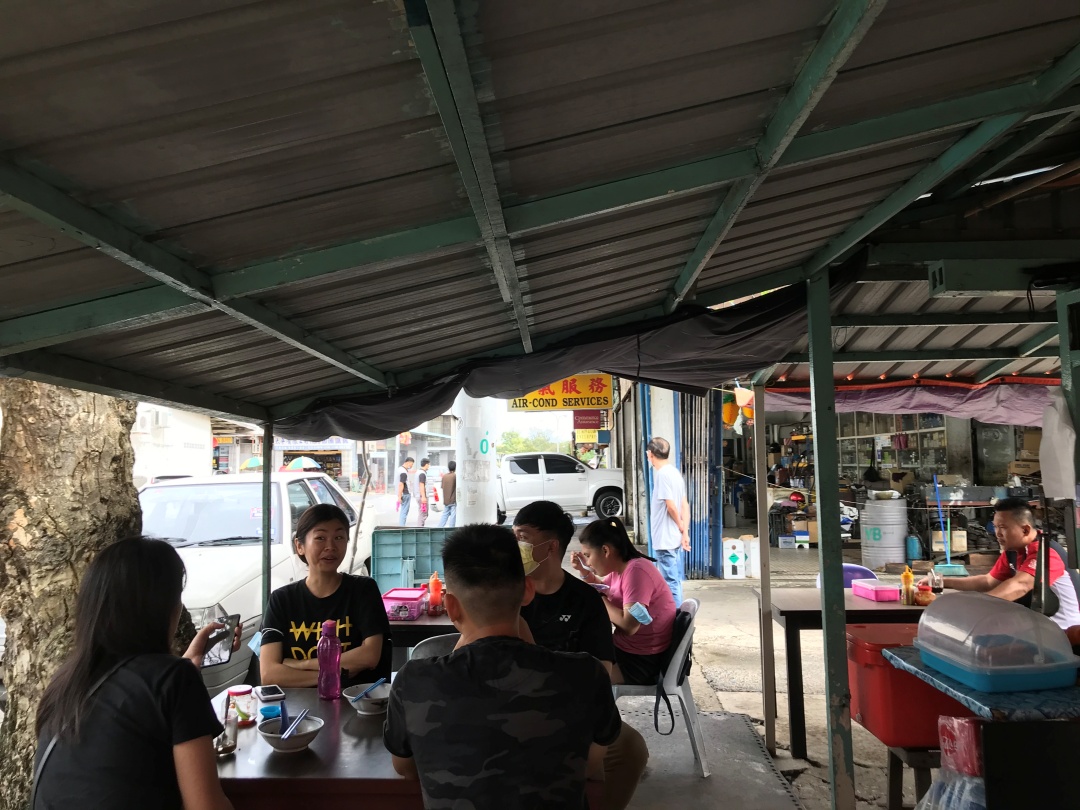 Mat continued: “In those days, we knew everyone in the area, especially the Chong family; actually, there were not many of them (traders) back then.

“At first, they only sold ‘cendol’ (local chilled sweet treat), ice-cream and ice balls. Then, came Grandfather Chong with his cart.

“There was also another street hawker who sold fruits and iced drinks, near the KFC outlet at River Road.”

Madam Chong, who now runs the business with her son, said back in the days her father-in-law held the licence issued by then-Miri Town Council, allowing him to move his cart around.

“He was called a ‘mobile hawker’, fully-licensed by the council.

“He sold not only ice-cream, ‘ice kacang’ and ‘cendol’, but also packed noodles.

“He had been in the business for about 20 years when finally he settled his trading site here.

“His licence has this present address, so for us, we cannot move anywhere else,” said Madam Chong.

Raised in a family of traders, Madam Chong’s son said his grandfather planted a jackfruit tree at the place many years ago.

“This tree must now be 56 years old. Our family have been able to enjoy eating jackfruit for so many years and now, everybody can come and pick the fruits,” said the youth, who is still in school.

Madam Chong said she and her son had been running the business for the past six years and they made just enough money to get by.

“As it is not a big business, we can manage without a big capital. And I don’t have to pay salary to my son!” she laughed.

Business starts at 5am, with Madam Chong and her son opening the stall and hooking up the canvas sheets to accommodate more customers.

“The tables are all foldable types, kept inside the box stall at night. A box stall like ours can be seen all over Miri,” she said. 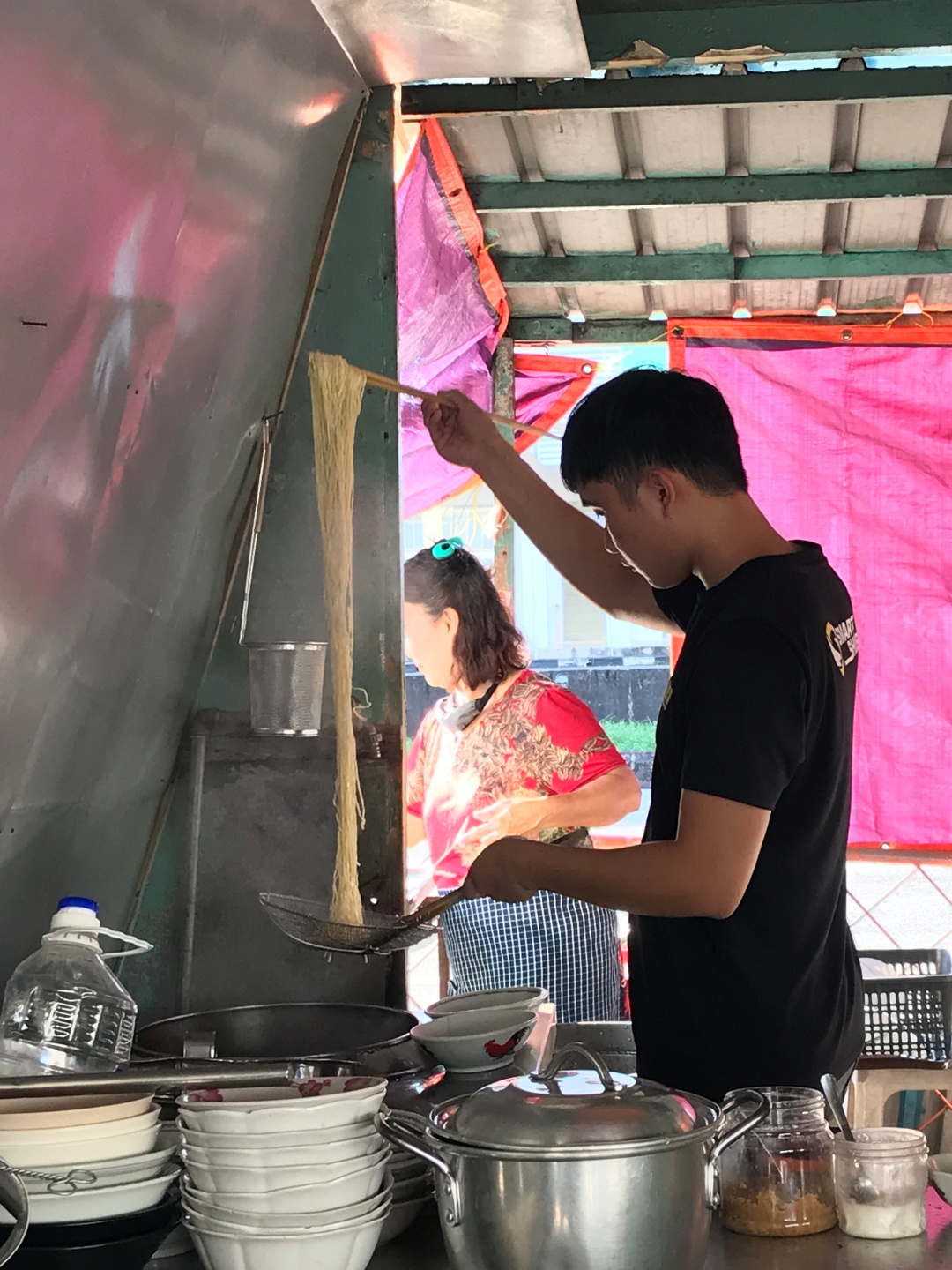 At the stall, Madam Chong’s son prepares the noodles, while she makes the hot and cold drinks.

According to her, the space is just enough for both of them – there is no need for a third worker.

“We are simple people, and we serve the old customers from around this area. In the last 30 years or so, we have been seeing familiar faces. We are all like one big family,” said Madam Chong, as she pointed at the jackfruit tree planted by her father-in-law years ago.

“The shade from tree foliage helps cool the place down. It’s like Grandfather Chong is still looking after us,” she smiled.

Many people call this place ‘noodles under a tree’. It is a very strategic place and indeed, able to accommodate business operations run by small families.

One customer, who only wanted to be identified as Miss Yang, remarked: “We like the friendly atmosphere – the cheerful ‘towkay neo’ (business owner) always makes for a happy morning.

“All customers would smile and chat with one another.”

The Chong’s box stall is now a part of the living cultural history of Miri. 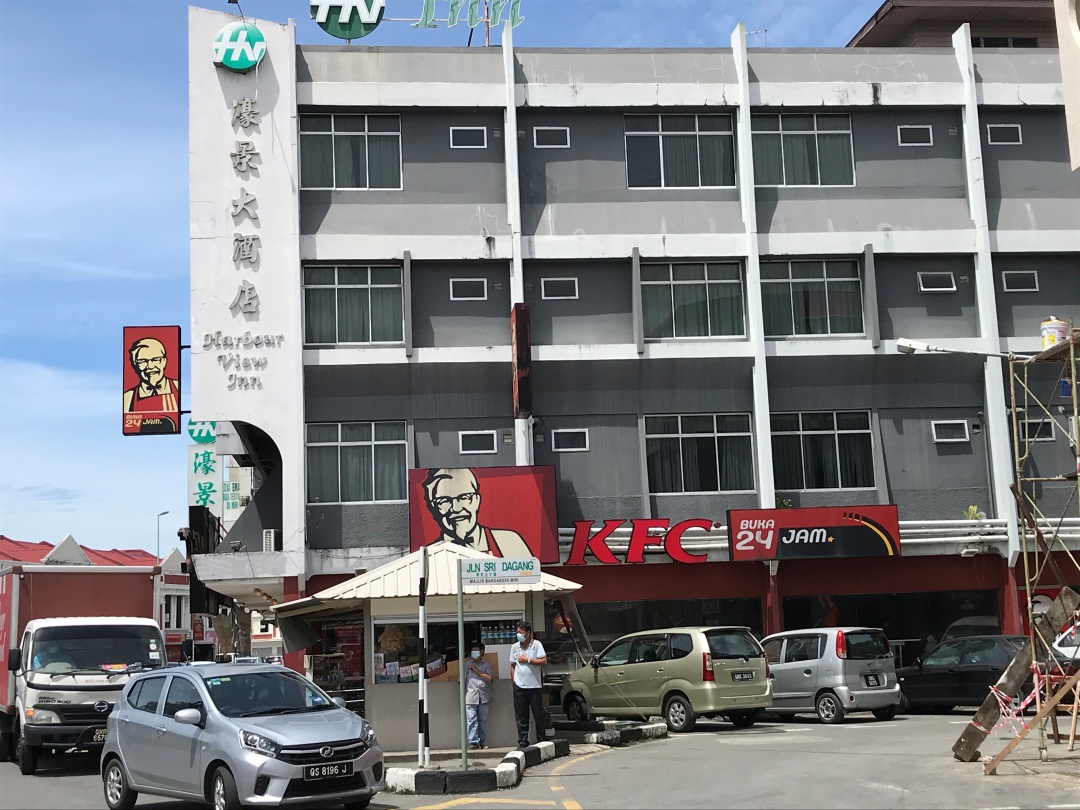 Madam Kueh, who owns and runs a small little shop at River Road, said in her younger days, there were not many coffee-shops in the old town area.

As such, people would pass by the stalls and pick up fruits and also bottled drinks, made locally.

Back then, there was this one specific fizzy drink that she really liked, which was produced in Miri.

This was sold in brown-coloured bottles, which were stored in ice-filled boxes – a truly satisfying treat on a hot day.

Whenever the school sports day was on, students would buy the drink from this one box hawker, as they walked home from St Columba School or Chung Hua School, to Krokop.

A plastic bag of the drink was 10 cents, said Madam Kueh.

Cut fruits only became popular when businesses began to thrive around the 1980s.

“The office workers would buy cut fruits, chilled by the ice cubes stored in containers.

“This was a good business,” said Madam Kueh. 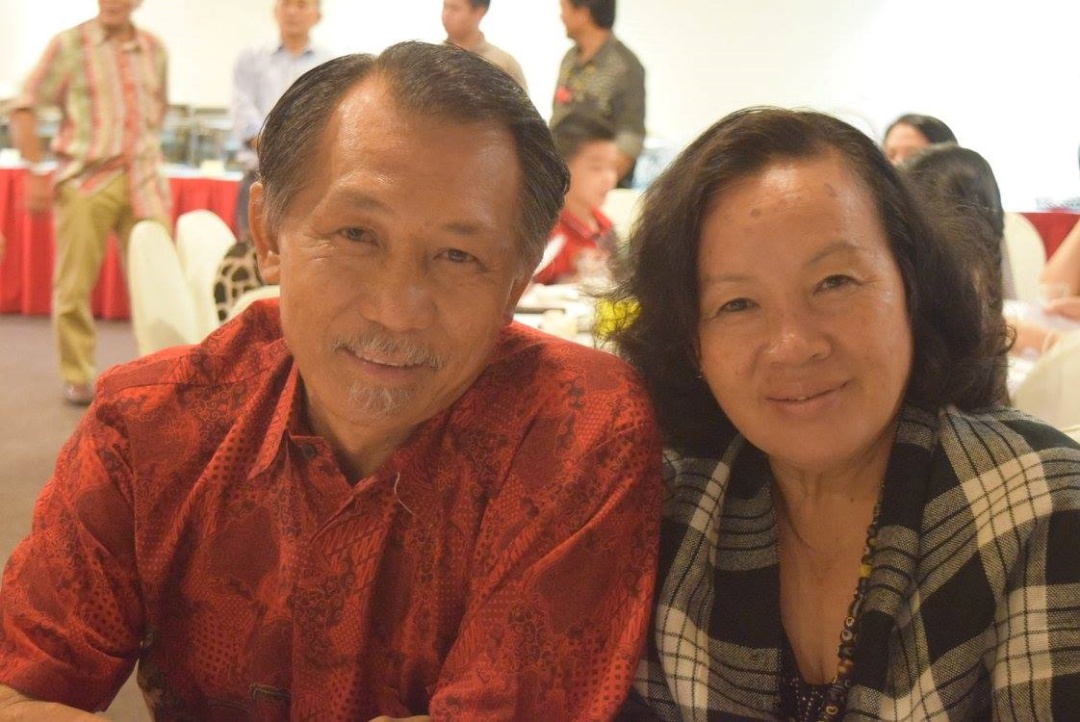 Dayang Lasung, a retired banker, and her husband.

Madam Dayang Lasung, a retired banker, said she and her husband would have a quick lunch at the ‘mee’ (noodle) hawker’s stall, next to the fruit seller – naturally, the couple would almost always buy fruits after their meal.

“It was so convenient for a busy officer, as it saved us a lot of time in that I did not need to go to the market to buy and cut the fruits myself.” 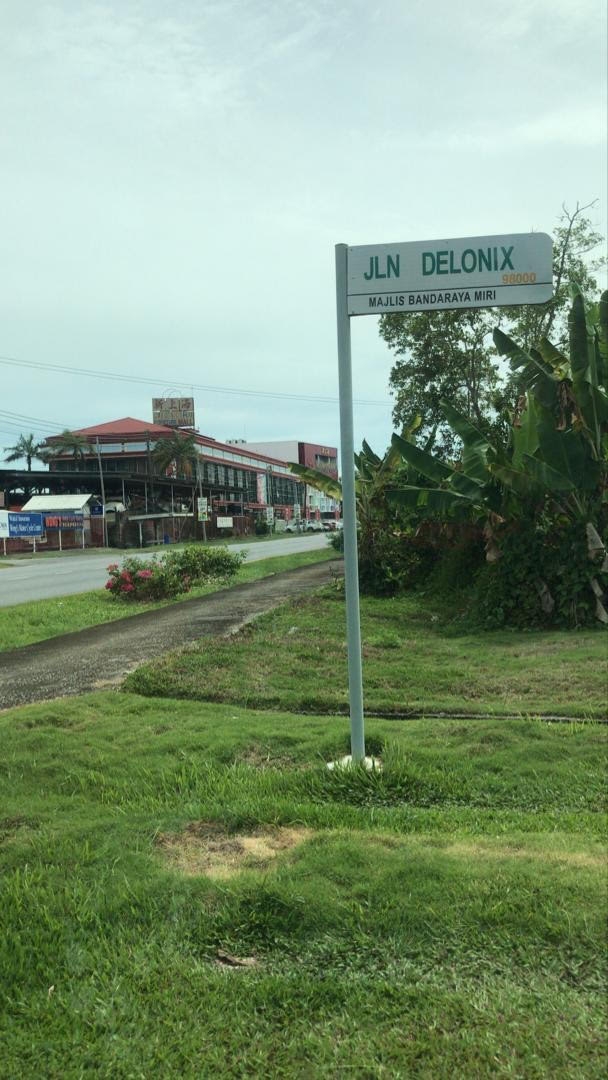 This site, where a sign indicates where ‘Jalan Delonix’ leads to, is where the ‘two ladies’ had run their noodle business for over 50 years before calling it a day.

Miss Yang pointed out to the writer that during her childhood days, there were ‘two ladies’ who used to sell noodles at a stall located opposite the Sin Siang Hai Furniture Shop.

“It was very convenient for me and my sister to get noodles from those ‘two ladies’.

“We bought noodles from them almost every day – provided that we had some money in our pockets.”

The two women worked very long hours, unlike the majority of hawkers today who would open their stalls only in the morning, selling food for breakfast and lunch.

“Students would buy noodles from the ‘two ladies’ to bring to school in the morning, so at that time, the parents did not have to worry about their children’s snacks.

“A pack of noodles was less than one ringgit, so it was very affordable,” she said.

The ‘two ladies’ might have already run their noodle business for more than 20 years at the time when Miss Ling was still a little girl.

Today, the duo’s little stall is no longer there. Still, the Krokop community remembers the ‘two ladies’ with fondness and regards them as a significant part of the area’s history. 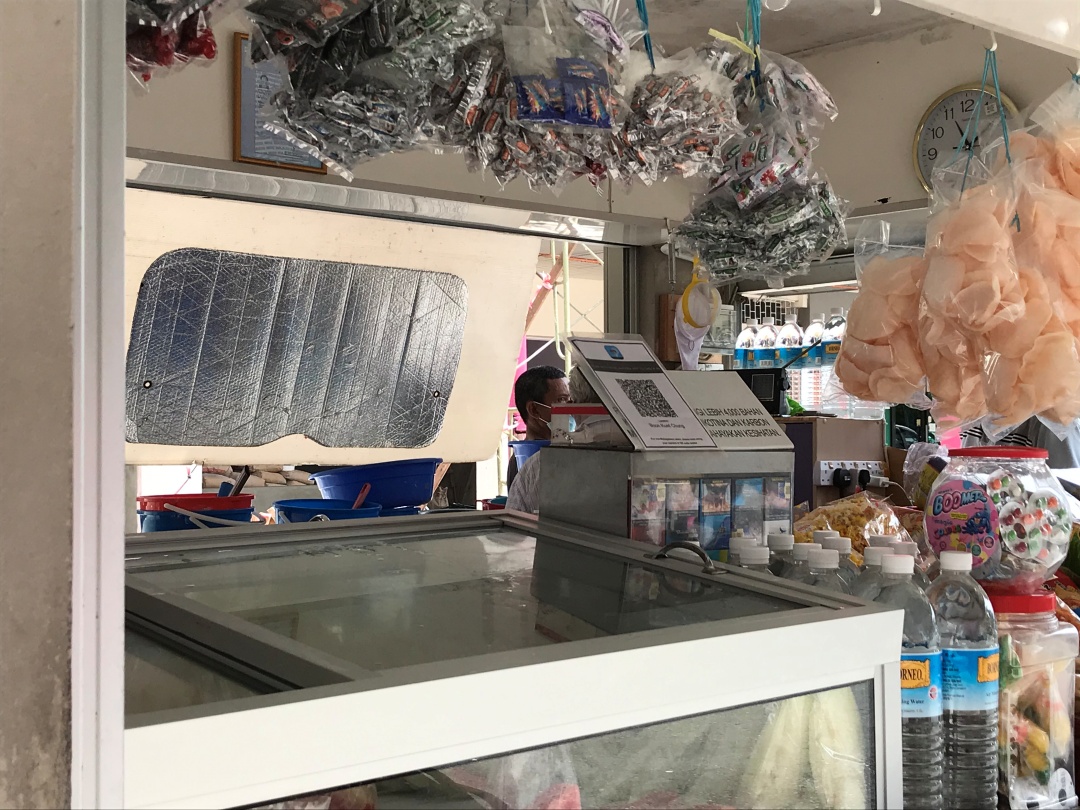 The refrigeration unit at this box stall has improved significantly from the days of hawkers using ice-filled boxes to chill the fruits and drinks.

The little box stalls and some hawkers’ stalls still stand in the ‘Old Miri’ areas, but they are frequented not only by the regular old customers, but also many local youngsters.

Kenny Suring said he had enjoyed going to these small stalls ever since his family had moved to Miri a number of years ago.

“As students, we found the pricing just right and the stalls were very convenient.

“I would say the setting-up is truly sustainable and still, they are very fitting even as a 21st-century business concept.

“What we need now during the Covid-19 pandemic is a sustainable concept highlighting the ‘small is beautiful’ slogan,” said the young Mirian.