Friday, June 25
You are at:Home»News»Sarawak»Abang Johari says unaware of any meeting between Agong and top political party leaders this week 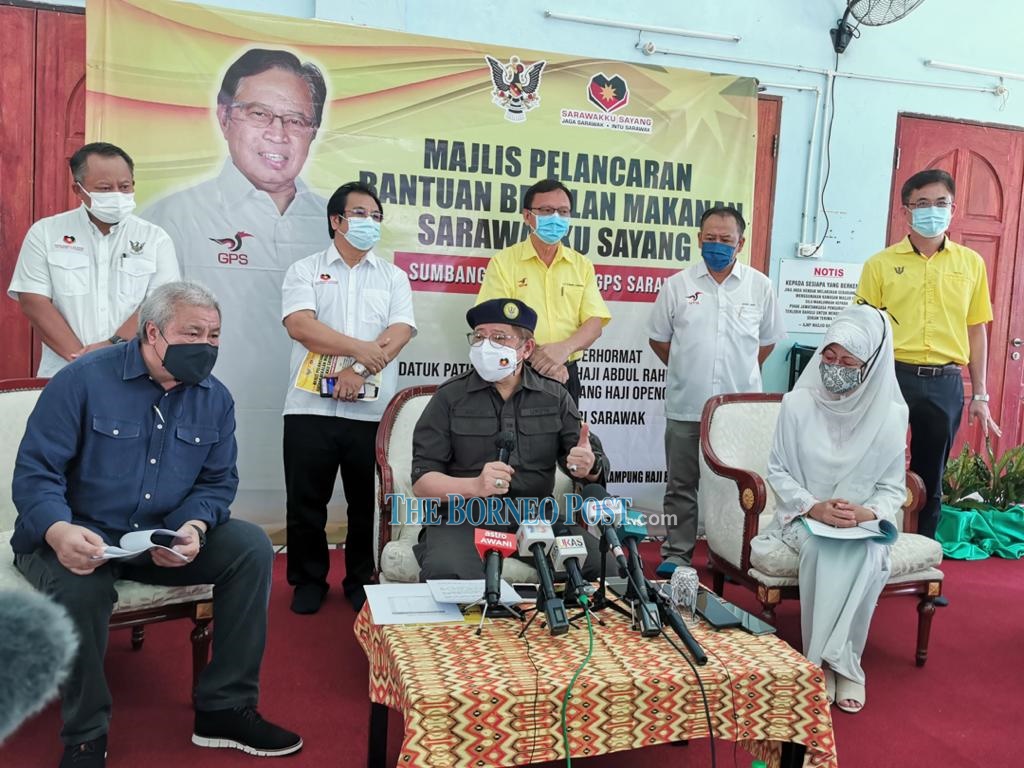 Abang Johari (centre) speaking to the reporters during a press conference. He was accompanied by Awang Tengah (left)), Fatimah (second right) and others.

“Where did you hear it? I don’t know anything about it,” Abang Johari, who is the Gabungan Parti Sarawak (GPS) chairman said when asked by reporters to comment on the alleged meeting after the Bantuan Khas Sarawakku Sayang (BKSS 6.0) Food Aid Distribution symbolic ceremony at the premises of Darul Ehsan Mosque in Kampung Haji Baki here today.

Malay Mail learnt yesterday that the meeting between Al-Sultan Abdullah and the top political leaders would be held as he wishes to personally ask their opinions as the country’s Covid-19 situation went from bad to worse despite the Emergency proclaimed in January.

Several party sources however confirmed that they were informed that the meeting will be done in batches from Wednesday to Friday this week, but have yet to receive any formal invitation as of yesterday.

Singapore’s Straits Times also reported yesterday that the heads of Malaysia’s nine royal households will reportedly hold an emergency meeting next week to discuss the Covid-19 situation and the state of Emergency in this country.

Royal household sources told the paper that the Malay rulers’ meeting will be held after lunch at Istana Negara and was decided a few days ago.

The meeting reportedly came following to the worsening Covid-19 health crisis, stumbles in the vaccine roll-out campaign, and growing calls to end the state of emergency and allow Parliament to convene.

“This is not a Conference of Rulers session but a special emergency meeting,” a source close to one royal household reportedly said, but declined to elaborate.

Meanwhile, on the food aid distribution, Abang Johari said that a total of 472,923 households from all 12 divisions in Sarawak are eligible to receive the aid.

“Statistics collected as of June 7 from the various Divisional Disaster Management Committees (DDMCs) have reported that a total of 49,811 households (10.5 per cent) statewide have been distributed the food aid.

“As I have announced before, each state constituency will receive a minimum allocation of RM250,000. For those with more household heads, they will be allocated according to the number of targeted households, especially those who are in the B40 category,” he said.

Abang Johari said the targeted date of completion for the food aid distribution is June 11.

“As such, we seek the understanding of all those who are still waiting to receive this assistance, as the distribution logistics in our state are challenging – with different areas requiring different modes of transport of air, land, sea, or a combination of these,” he said, thanking all those who are involved in ensuring timely delivery of food to the affected areas and households.

Abang Johari decided to provide an additional of RM15 million making it a total of RM35.5 million. The procurement and distribution of the food aid is handled by the various DDMCs.

On another note, the chief minister reminded people to continue to abide to the standard operating procedures (SOP) in the fight against Covid-19.

“Please abide to the SOP. What happen is that a lot of social events despite all the warnings and so on, still there are people who do not abide SOP. Even a small event can cause the virus to spread especially among those who are not vaccinated yet.

“I would like to take this opportunity to remind everyone to continue to take care of yourself, your family and your surrounding communities as we continue to fight against Covid-19,” he said.