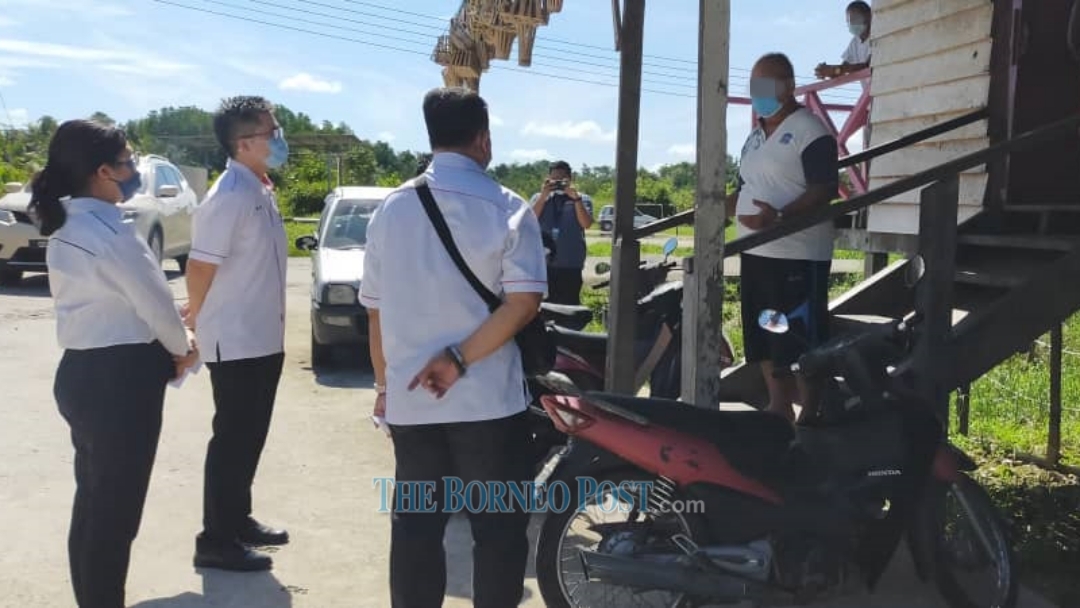 Officials from Sarikei Division Disaster Management Committee serving the compound notice to one of the longhouse headmen.

SARIKEI (June 10): Two longhouses here that are placed under Enhanced Movement Control Order (EMCO) were each issued with a compound of RM4,000 for breaching the Gawai Dayak standard operating procedures (SOP) set by the authorities.

The compound notices were served on the respective headmen by a team from the Sarikei Division Disaster Management Committee, comprising officials from the divisional health office, Resident’s Office, district office and Meradong police.

“Based on investigation carried out by Sarikei Division Health Department, residents of a longhouse in Sungai Selangan had organised a ‘miring’ on Gawai Dayak eve (May 31).

“The longhouse was placed under EMCO from May 26 till June 11 after several residents were tested positive for Covid-19,” he said, adding it was clearly stated in the SOP that ‘miring’ was strictly prohibited in an EMCO area.

As for the longhouse in Skim B, Dr Fung said an investigation conducted by Sarikei Division Health Department established that residents of six units at the longhouse had organised a pre-Gawai gathering on May 30.

As such, the longhouse had breached Regulation 16(1) of the Prevention and Control of Infectious Diseases (Measures within Infected Local Areas (Amendment) (No. 2) Regulations 2021, he explained.

“The SOP laid down in conjunction with Gawai Dayak by SDMC, Unit For Other Religions (Unifor) of the Chief Minister’s Office, and Majlis Adat Istiadat Sarawak (Mais) which was updated on May 19 had clearly stated that ‘miring’ and other social gathering were strictly prohibited,” he added.