Saturday, June 19
You are at:Home»Columns»‘This used to be my playground…’ 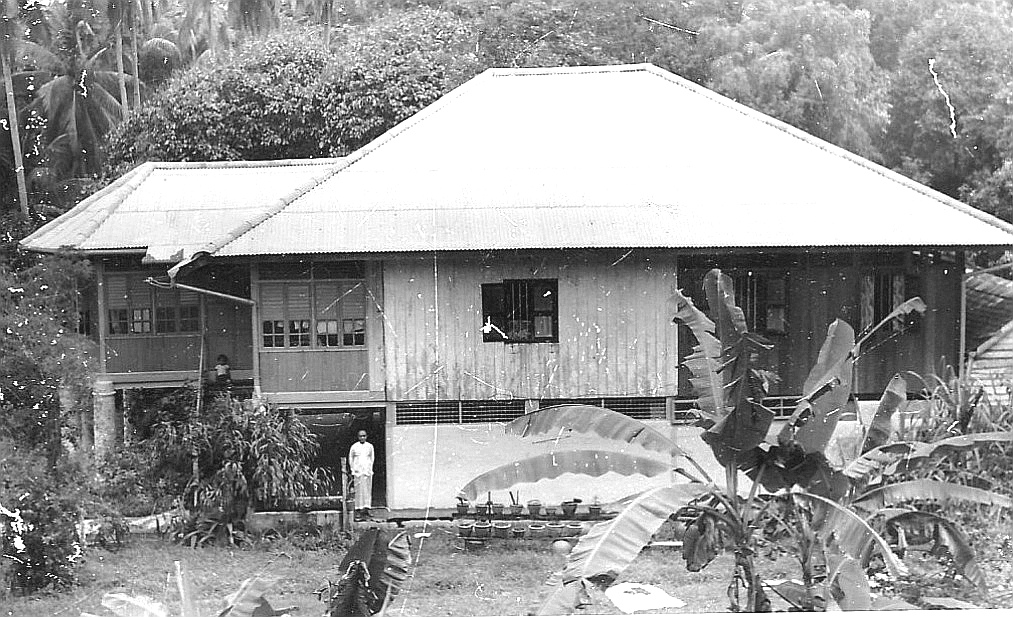 The grand old homestead of Grandpa Ong Kwan Hin at the road bearing his name.

I WAS born in Kuching at the beginning of a new decade, in 1950 – a so-called ‘Baby Boomer’ during the era after the ravages wrought by the Japanese War in the Pacific, which had lasted from Dec 7,1941 to Sept 2, 1945.

My father came from a prominent Hokkien family, whose ancestors were appointed heads of the Chinese clans during their lifetime; my mother from a Teochew professional and mercantile one. During this time, most marriages were still being matched made but they had fallen in love; dad was an upcoming young civil servant in the Agriculture Department and mum was an English schoolteacher.

After marriage, they stayed in my Grandpa’s homestead – a huge mansion in those days, of nine rooms, two huge living rooms, a massive kitchen, and a seven-acre compound that had included a poultry farm, many fish ponds, as well as numerous fruit trees among them durian, rambutan, starfruit, cherries, mangoes, buah cheku, buah kerondong, mangosteen, dabai and bananas.

It even had a badminton court! Grandpa Kwan Hin had originally bought the property from a very rich immigrant Indian.

Besides Grandpa and his second wife from Singapore (my dad’s biological mother had died after giving birth to her 14th child), there were altogether three families, two spinster daughters and numerous cousins who were sent over by parents who wanted them to be ‘trained and disciplined’ from time to time. There would be, at any one time, a minimum of at least two-dozen adults and children under this one roof – including a handful of nannies and indentured elderly maids from China.

In other words, I had grown up during my early pre-teen years without much personal privacy and having learned, cultivated and appreciated the stability, the comfort and the joy of family communal living. There was nothing that could be hidden, any secrets were nigh impossible; squabbles and quarrels were unheard of. Even raising one’s voice towards another was considered a sinful sacrilege.

Everyone, big and small, respected Grandpa (Ah Kong) – his word was law. We all lived harmoniously and successfully under one roof, although our own family expenses including food were taken care of by ourselves; Ah Kong looked after everything else.

There was a huge communal kitchen, and during meal times separate stoves numbering four or five were used almost simultaneously – the adults and the elders would eat at the main round table, children separately at their own family ones.

Pantries and cupboards lined the walls of the kitchen area!

I remember best the years before I started going to school at aged six, in 1956, and recall the sunny days just gallivanting around, either on my own or with cousins around Grandpa’s massive orchard. Some days, we were sent to pick eggs from the chicken coop and we had dreaded the smell emanating from all the chicken dung and tried to complete our task speedily. (There’s nothing quite as tasty as a raw egg still warm just out of a chook’s bottom!) 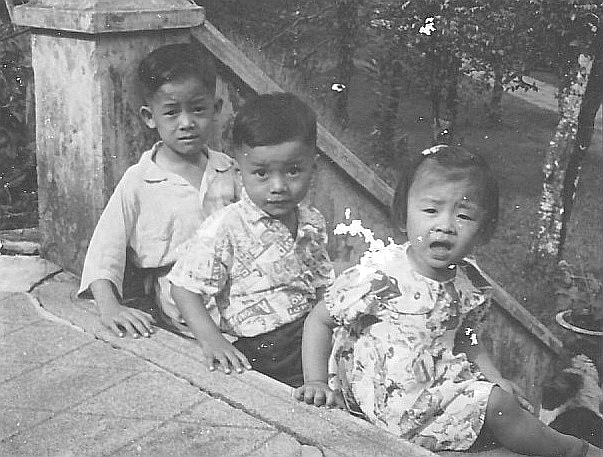 The writer (centre), at age six in 1956, seen with his sister Edrea and his cousin David on the stairways leading to the orchard.

Before the days of the flush toilet system, we had to journey some distance to the separately-built toilet sheds to do our business; it was really scary at night as the path leading to it wasn’t lit at all and we had to use our own torchlight. What had made it even scarier was that many owls would dwell among the tall trees just behind this shed and they would always choose that time when you’re there to hoot suddenly and flutter their mighty wings!

The best and most enjoyable period was during fruiting season; as there were so many different kinds of fruits we could always rely on something being in season throughout the year. Starting at a very young age, I had learned to climb (without letting the adults see us) firstly the cherry trees to start with, then the starfruit treess, eventually the rambutan and the mangosteen trees. The dabai trees proved too high up.

When I was about seven, I almost had my left eye taken out by a bamboo pole with a hook at the end (to pluck the mangosteens) by a senior cousin while I was up the tree – she had mis-aimed and almost plucked out my eye instead!

There were also a number of running streams, big and small within the orchard; and they’d always be full of fish – from brightly-coloured guppies to fighting fish and even small eels and swordfish that had escaped from nearby aquariums.

In 1957, my Grandpa had decided to sub-divide his seven acres into 14 separate lots of individually-titled land and to bequeath a piece each to his surviving children.

I remember that to be fair, he decided to have all his children draw lots from a box – my dad had delegated me to draw his, and I drew the first lot, the one he eventually built his own house; it had the advantage of inheriting the main gate entrance, which was rather grand and also had a main road frontage.

Four lots were sold to non-family members to fund the construction of the road, which now bears my Grandpa’s name – it had rendered accessibility to all the 14 lots; and it became a public road when it was handed over to the council a few years later.

Today, only four of the original lots are still in our Ong family’s ownership. Over time, many of those who had inherited had either sold theirs off, some had migrated or had part-exchanged them with other properties or businesses.

My father completed his own house in 1958; and after eight years staying under the same roof in the old homestead with my grandparents and other family members, we moved to our own residence, which is just about 100m away, still within the old playground and orchard!

I had continued to enjoy my time here – and 21 years later, in 1979, I too completed my own home, which was sited just opposite to my Grandpa’s old estate, where I still dwell to this very day. 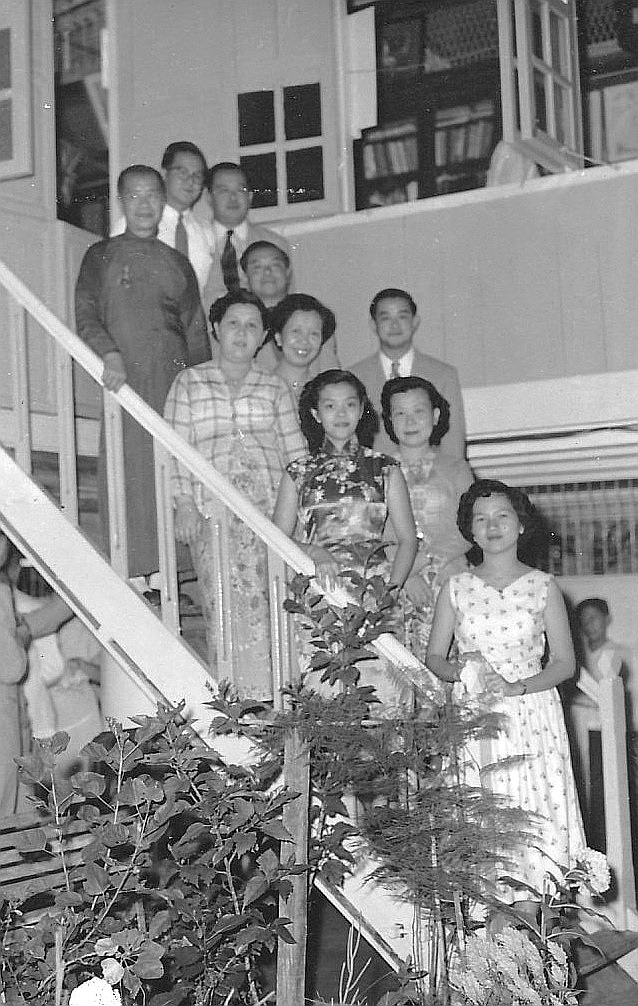 Many of my old playmates from my pre-teen years are no longer with us today; my closest two cousins David and Charles are now with the Lord; some have migrated and gone overseas; a few who are still here live their own lives having lost touch through different interests, distance and lack of constant communications. We see each other only at times of celebration like birthdays, weddings and festivals, or of sadness like funerals and sickness.

Such is the nature of all our lives.

But once upon a time, we had our share of sunshine, love and harmony.

We were at play in the fields of the Lord.