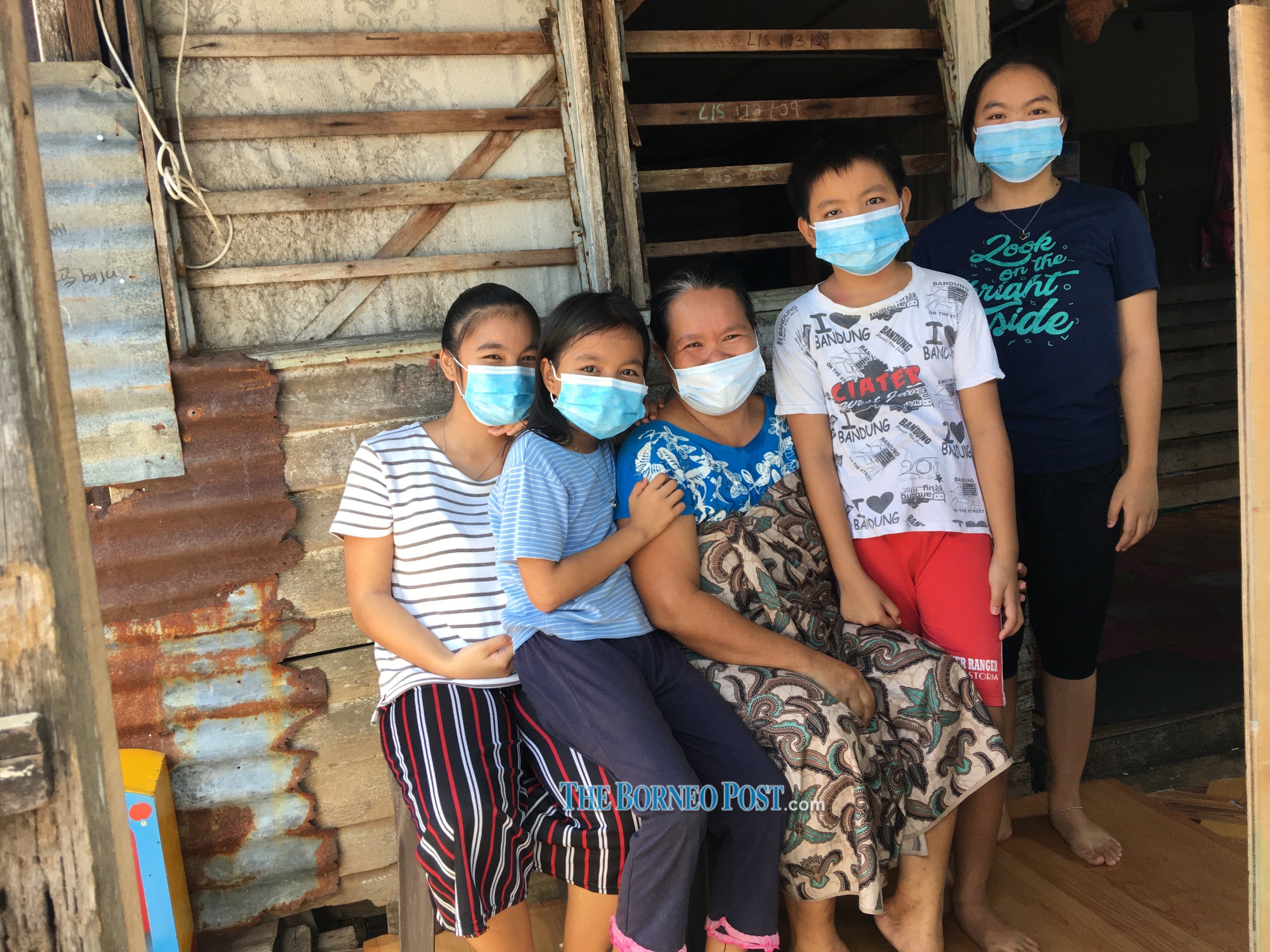 Lily and her four children at their home.

MIRI (June 15): The Covid-19 pandemic and the various Movement Control Orders to stop the virus from spreading have significantly affected many Sarawakians financially, particularly those from the B40 group.

Single mother Lily Jalen, 48, who lives in a squatter colony at Kampung Pasir, Lutong, has been unemployed for two months.

“I had been working in coffee shops for many years and received RM30 per day. Just before the MCO, my pay was reduced from RM30 to RM26 per day, which clearly affected my family’s livelihood,” she told The Borneo Post at her home today.

“I’ve been trying to find other options, such as looking for vacancies at other coffee shops, but it is just difficult to get one. Now all coffee shops do not need many workers because they operate for takeaways only.”

Lily, who separated from her husband eight years ago, has four children aged between 10 and 15.

He remarried and lived in Bintulu, but died about a year ago.

“My husband left me and our four children with nothing. Even when he was alive, he never supported the children financially,” she said.

Lily said all her four children receive e-Kasih assistance from the government.

“Previously, each of my children received RM100 monthly, which was a total of RM400 monthly. The assistance was increased to RM150 per child a few months ago and that makes RM600 monthly, which in a way has helped us to survive,” said Lily.

The aid also helps to cover mobile phone prepaid credits for the children so that they do not miss their school classes, which are being carried out online.

Neighbours also often help with free food as they understand the family’s struggles.

Previously, Lily’s house was in a very bad shape, but Assistant Minister of Tourism, Arts and Culture Datuk Sebastian Ting, who is Piasau assemblyman, approved repair work under the Sarawak Housing Improvement Programme for the Poor (PPRMS). Benjamin is seen in his dilapidated house.

Lily’s neighbour, divorcé Benjamin Enjam, 69, has been living in the squatter area for nearly 10 years.

Also unemployed, Benjamin lives alone in a dilapidated house which could collapse at any time.

“I have two children but they are under the care of my ex-wife since the divorce many years ago.

“I am jobless because again who wants to hire a 69-year-old to work? With the pandemic, many people are affected,” he said.

Benjamin said he had requested for assistance with house repairs but has not heard anything so far. 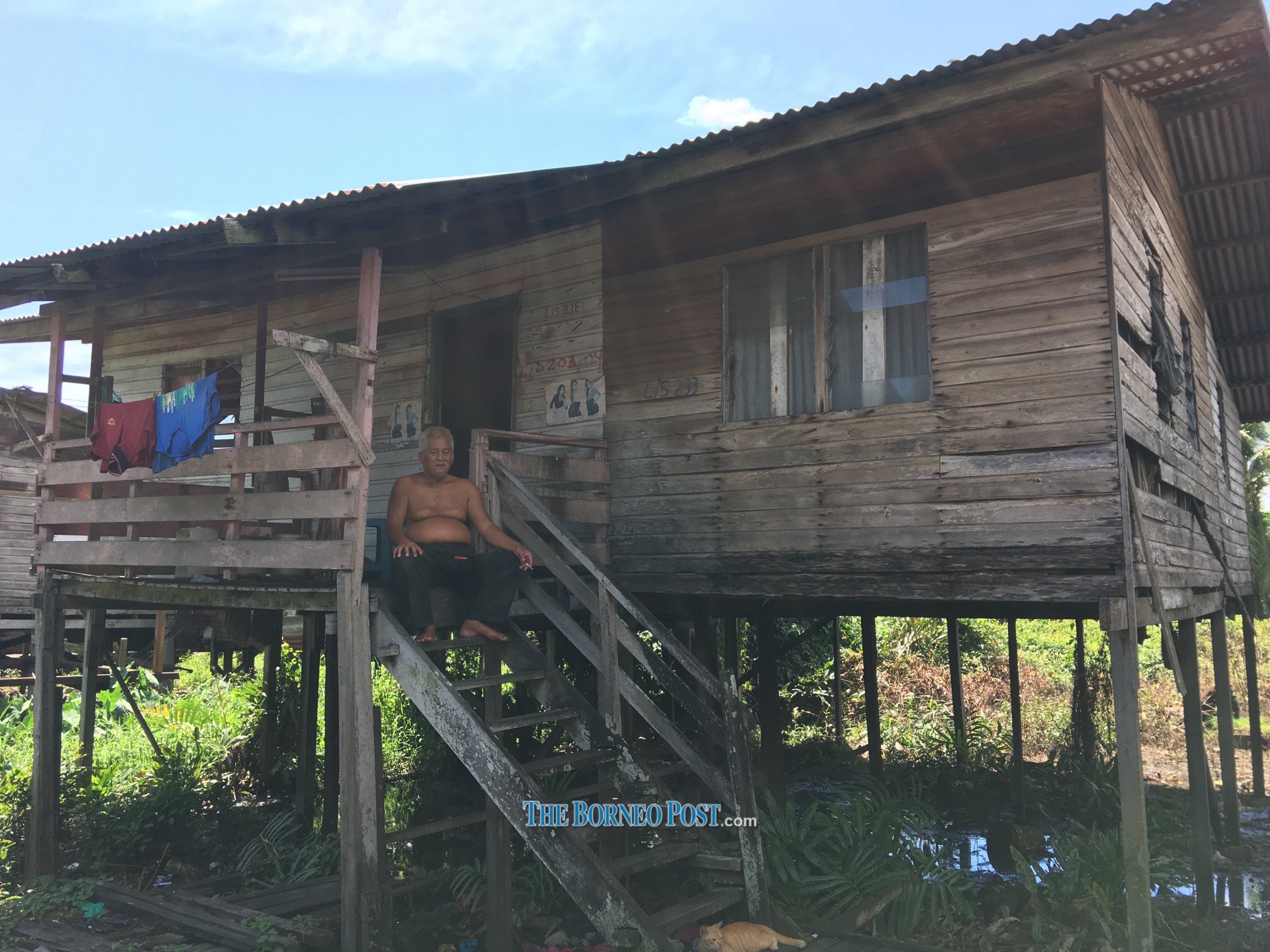 Siam sits on the stairs of his house.

A few metres away in another dilapidated house fellow divorcé 68-year-old Siam Langi lives on his own.

For many years, Siam has been helping traders at the market to clean their tables, washing their chopping boards and other items.

“For that job, I got about RM12. Sometimes, I just earn RM2 daily. I cannot complain much, but rather be thankful for whatever I earn,” he said.

He shared that a benefit of working at the market is that he would at times be given free vegetables or meat by the traders.

“I have four children but they are living their own lives now. They rarely come to see me here,” he said.

There are over 300 squatters households in Kampung Pasir, where the majority of residents do not have permanent jobs.