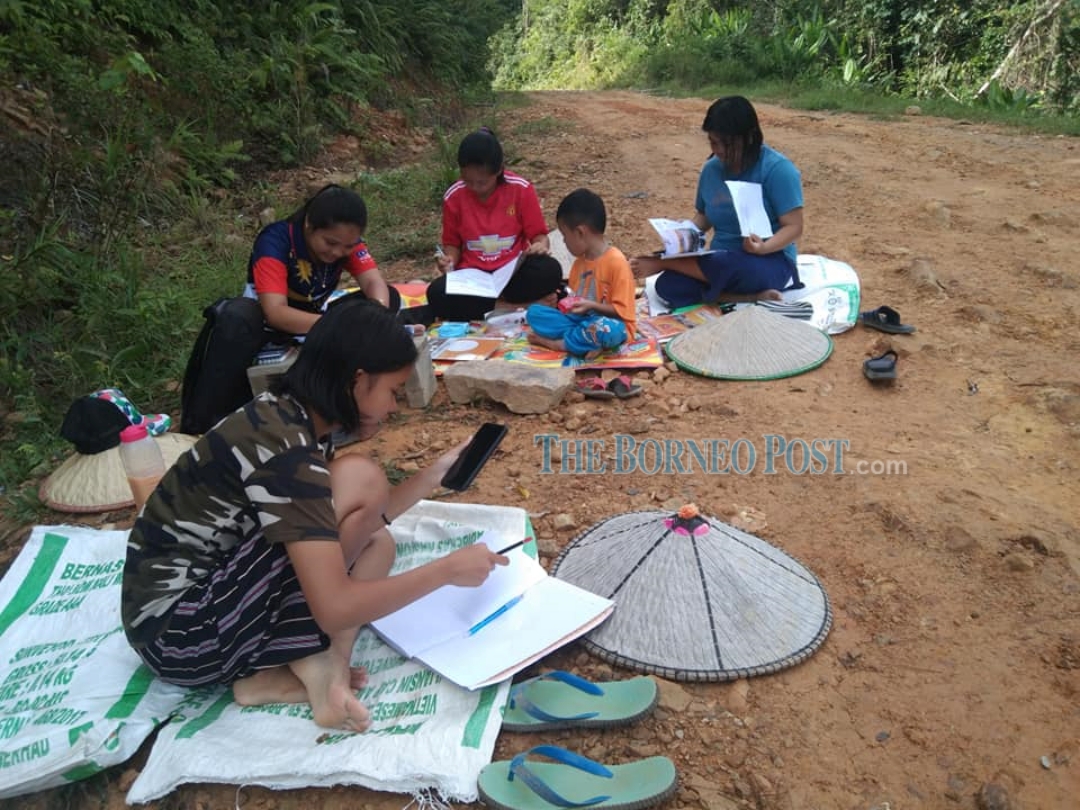 Photo uploaded on Limbang Facebook Community page shows primary and secondary school students from Kampung Entakong in Ulu Medamit at their ‘makeshift classroom’, where they use gunny sacks as mats to sit on as they undergo their PdPR lessons. – Photo courtesy of Lenneth Xabi

MIRI (June 16): Batu Danau assemblyman Paulus Palu Gumbang has called upon the federal government to expedite the works on expanding network coverage over Ulu Medamit in Limbang, following the completion of the construction of the telecommunication towers at the end of last year.

According to him, poor connectivity has forced a group of children from Kampung Entakong to turn a section of a dirt road into a ‘makeshift classroom’ to study under the Teaching-Learning From Home (PdPR) programme, which has been running throughout different stages of the Movement Control Order (MCO) since March last year.

“There are four telecommunication towers in Ulu Medamit which were completed in mid-December, but the transmission equipment has yet to be installed,” said the assemblyman in a statement, issued in response to a post published on Limbang Facebook Community page yesterday.

Uploaded by netizen ‘Lenneth Xabi’, the post shows photos of children studying at a section of a dirt road in Ulu Medamit, where gunny sacks are used to cover the ground for them to sit on.

Even then, the internet coverage was unstable, according to the post.

“The situation faced by the PdPR students in UIu Medamit. Feeling sorry for them – they have to make do with internet connectivity that comes and goes; to wait 30 minutes up to one hour to regain the signal.

“Very difficult for these children to study; it’s not too warm in the early morning, but as noon approaches, it can get quite hot.

“I hope the internet coverage over Ulu Medamit would get better to facilitate these students,” wrote Lenneth Xabi in the Facebook post, which as at 5.30pm yesterday had garnered over 1,500 reactions, nearly 160 comments and 579 shares.

Generally, the comments highlighted empathy among fellow Facebook users, many of whom said the internet connectivity problem also affected the town areas such as Limbang.

There were also those complaining about poor services provided by a number of telecommunication companies.

Adding on, Paulus said the federal government should take up Chief Minister Datuk Patinggi Abang Johari Tun Openg’s proposal for Sarawak to be issued its own telecommunication licence to expedite the provision of related services without any more delays.

In his speech for the launch of ‘High-Speed Broadband Connectivity’ in Mulu in April this year, Abang Johari said the Sarawak government had achieved its target of having at least 1,200 telecommunication towers across the state as a part of its ongoing upgrading and expansion works on the telecommunication and high-speed Internet infrastructures in the state.

Under Sarawak Digital Economy Strategy 2018-2022, that target set between Sarawak Multimedia Authority (SMA) and Malaysian Communications and Multimedia Commission (MCMC) would be for Sarawak tobuild 600 towers, while MCMC would roll out an additional 686 towers within the set timeline under the National Digital Network (Jendela) platform.