Wednesday, August 17
You are at:Home»News»Sarawak»Woman in Miri cheats death after car turns turtle in accident 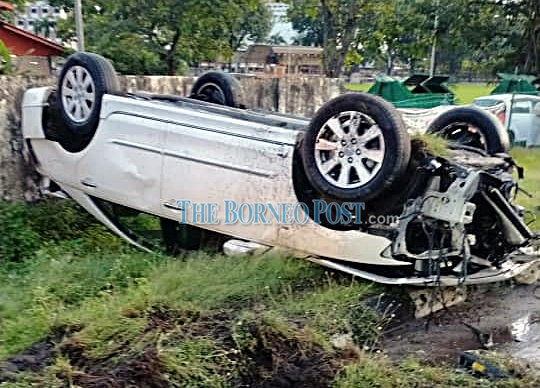 The car driven by the victim involved in the accident.

MIRI (June 20): A 19-year-old woman was lucky to be alive after the car she was driving went out of control and crashed into the concrete wall of a ‘tamu’ market before turning turtle on the roadside.

The accident occurred at Jalan Melayu near Centre Point Commercial Centre here around 6.13am today.

Miri Fire and Rescue Department (Bomba) chief Law Poh Kiong said a team of nine personnel from Miri fire station was deployed to the scene after receiving a distress call and arrived at the scene at 6.16am.

“Upon arrival, the team found a vehicle driven by the victim was involved in an accident. The impact from the crash caused a part of the concrete wall to collapse and hit a parked car,” he said.

Other road users who happened to pass by the area helped to extricate the victim from the vehicle while waiting for the Bomba and ambulance to arrive.

Law said the victim, who was alone in the vehicle when the accident occurred was handed over to the medical personnel for further action.

“Firemen then covered the oil spill on the road with sand around the area,” he added.

The operation ended at 6.28am.