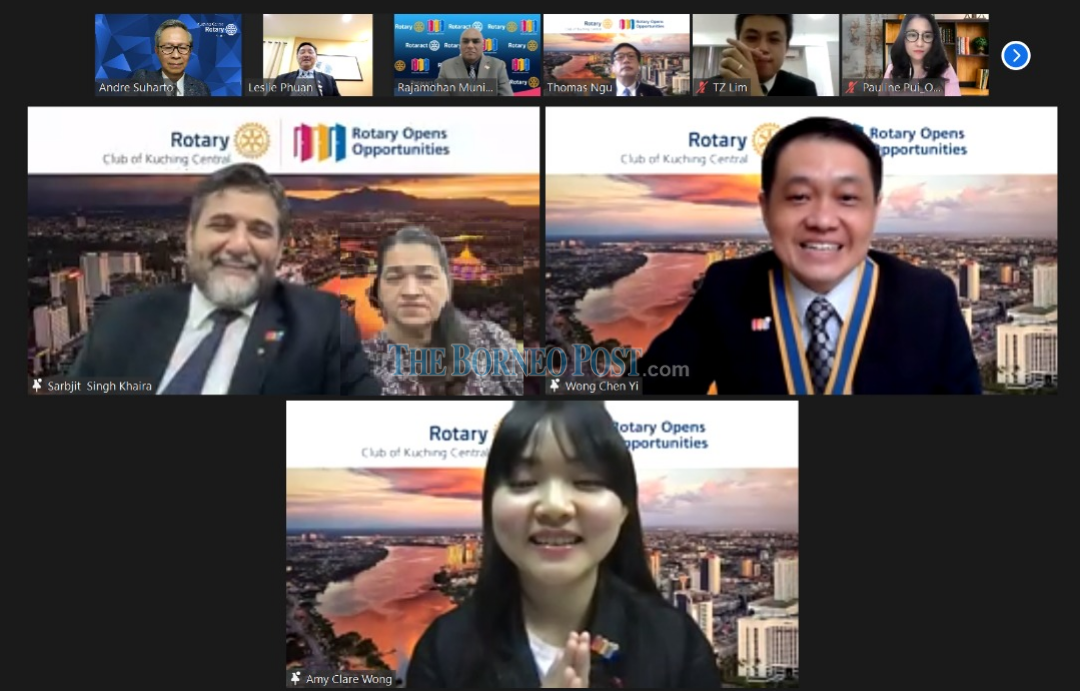 RCKC recently inducted two new members in a simple induction ceremony, infused with as much of the traditions as possible over Zoom.

KUCHING (June 25): Rotary Club of Kuching Central (RCKC) has become the largest Rotary Club in Sarawak following the induction of two new members to the club.

Amy Wong An Qi and Sarbjit Singh Khaira are now the club’s 55th and 56th member respectively, and this is the highest number of members RCKC has had since it was founded in 1986.

Sarbjit, aged 49, is in the legal profession specialising in personal injury law, who owns and runs Messrs Khaira & Co.

“Sarbjit is an active member in various associations and non-governmental organisations which include chairman of Advocates Association of Sarawak (Kuching branch).

“He is also a member of the Indian Association Kuching, and member of Sikh Temple Association. He is married to Tina Harjit Singh and they’re blessed with three children,” added a press release by RCKC.

Amy Wong, on the other hand, is aged 24 and is working as a Marketing Executive of a public listed company and her classification in Rotary is Digital Marketing.

“Wong is the holder of Bachelor’s degree in Commerce, Finance and Marketing from University of Melbourne,” said the press release.

RCKC recently inducted the two new members in a simple induction ceremony, infused with as much of the traditions as possible over Zoom.

“More than 20 Rotarians and spouses were in attendance to warmly welcome the new additions to the RCKC family,” said RCKC.

The recruitment of new members with diverse professions and backgrounds has always been the direction of RCK, while the club also noted that keeping members engaged especially during the period of pandemic is ever challenging.

Young members will further enhance the profile of the club, while impactful projects and activities will help Rotarians stay connected and united.

To learn more about Rotary Club of Kuching Central and their projects and activities, kindly browse through RCKC’s webpage http://kuchingcentralrotary.org/website/ or Facebook https://www.facebook.com/kuchingcentral.

Previous ArticleTegas extends its free rental, co-working pass at its hubs till Dec 31
Next Article Army medic team expects over 1,000 Ba Kelalan folk to be vaccinated by next week