Tuesday, August 9
You are at:Home»Business»Cryptomining highest in terms of attempted attacks 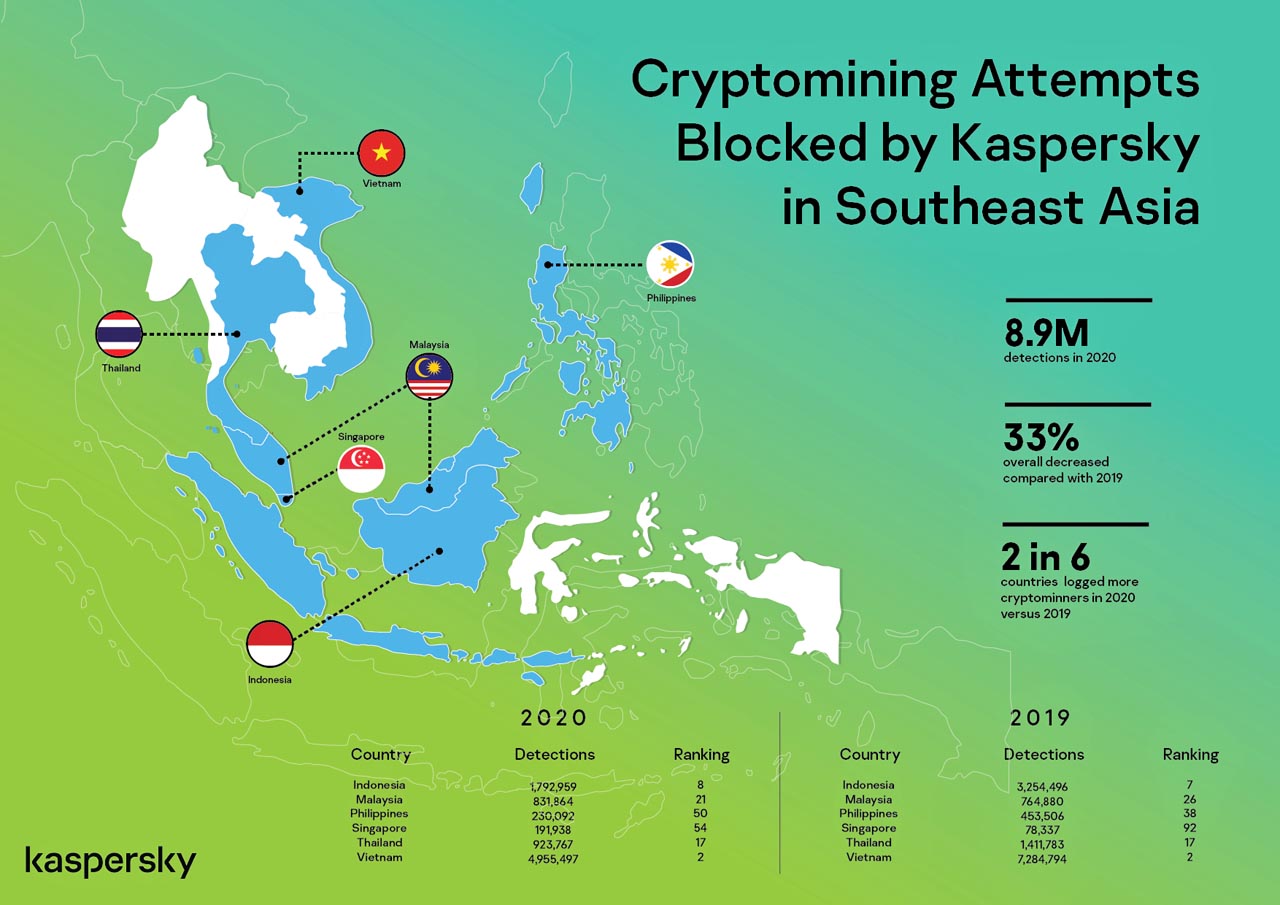 KUCHING: In Southeast Asia, cryptomining is the highest in terms of attempted attacks blocked by Kaspersky at 8.926 million in 2020.

Malicious cryptocurrency malware used in cryptomining is being used by cybercriminals to use hardware they don’t own such as smartphones, computers, tablets, and servers.

They then harness the processing power of these devices to mine for cryptocurrencies such as Bitcoin, the prices of which have been skyrocketing.

It warned that if you are a business owner and your staff are working remotely because of the pandemic yet you find your office power bill unusually high, check your IT backend. There might be cryptominers using your business resources, at your expense.

“We have seen a decrease in miner attacks around the world and the same trend applies to SEA, too,” Kaspersky’s Malware analyst team lead Evgeny Lopatin said.

“The main factor behind the decreasing number of attacks is the cost of cryptocurrencies which has been declining over the past three years and only recently began to rise sharply in price again.”

Kaspersky is advising business owners not to keep their guards down.

“Small and midsize businesses (SMBs) normally have a relaxed attitude towards information security and so the main damage from cryptomining is expected to be felt by this sector,” Kaspersky SEA general manager Yeo Siang Tiong said.

“Cryptocurrencies continue to attract investor and user attention due to the continued spike in its prices so we really caution SMBs not to underestimate the possibility that cryptomining will remain to be a serious cyberthreat.

“After all, cybercriminals have long realized that infecting servers is more profitable than mining on home users’ computers so SMBs should take this silent threat seriously.”

In the region, most of the monitored cryptomining attempts prevented by Kaspersky were observed in Indonesia and Vietnam for two consecutive years, accounting for almost 71 per cent in 2020 and 80 per cent in 2019 of all attempted incidents in SEA.

Unlike ransomware attacks which tend to be more frightening and require to be dealt with quickly, cryptominers flourish the longer they are hidden and use this stealth in the long-term to profit from the exploit.

Some tell-tale signs that personal devices are being used illegally by cryptominers include system response slowing down due to the workload strain, increase in power consumption that result in batteries depleting at a faster pace or electricity bills skyrocketing, and a more significant data usage.

If businesses suspect their systems being accessed by cryptominers, Kaspersky has a few tips to ensure the safety of their assets and devices.

Avoid clicking email links and attachments from unverified and untrusted sources. Practice caution when installing software from the web since cryptominers are known to embed malware in them.

Take advantage of a strong security solution that businesses with limited cybersecurity expertise and resources could use like Kaspersky Endpoint Detection and Response Optimum (KEDRO).

KEDRO is actually an efficient way for small and medium enterprises (SMEs) to reduce costs while saving on protection as it complements protection for endpoints such as mobile phones, tablets, and laptops connected to the company network.

Carry out regular security audits of your corporate network. And you should not forget about less-obvious targets, such as queue-management systems, point of sale (POS) terminals, and vending machines.

Once infected, an army of those devices can bring much profit to criminals.