Saturday, August 13
You are at:Home»News»Sabah»Penampang fatal crash caused by ‘hydroplaning’ 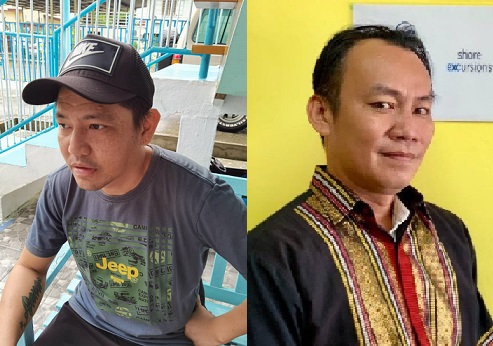 PENAMPANG: Residents in Penampang are concerned over the recent road maintenance work done by contractors on the Penampang-Papar Old Highway that may pose grave danger to road users.

According to Denis Kung from Kampung Nambazan, improper resealing work of the highway may cause the formation of water puddles on the road which not noticeable by speeding road users.

“I have been told that this unnoticeable water puddles can cause ‘hydroplaning’, a condition where stagnant water on the road causes your car’s tires to lose contact with the road surface,” he said.

Denis said the risk of accident gets higher when drivers who want to overtake another vehicle in front of them increases their speed when changing lane from left to right and will inevitably lose control of his/her vehicle when the tires of their vehicles lose their grip when going through these water puddles causing the ‘hydroplaning’.

“And judging from the unfortunate fatal accident caught on CCTV involving a truck driver and a food delivery rider on Thursday, it is clear to me, and I believe it to be so unless further investigation by the authorities says otherwise, that the accident is due to ‘hydroplaning’,” he said in a statement on Friday.

Denis implored the relevant authority to immediately inspect and rectify water puddling on this stretch of road so as to prevent ‘hydroplaning’ in the future and where necessary, to install warning signs, reflectors or speed reducers to remind speeding road users.

The former Village Community Management Council (MPKK) for Kampung Ramayah, Tony Henry, said that the CCTV clip is the best evidence that the Penampang folks and users have to face the lurking danger posed by the highway and appealed for immediate intervention by State Minister of Works Datuk Seri Bung Moktar Radin.

“There have been so many instances of fatal road accident on this highway but the CCTV clip that went viral yesterday is the clearest evidence we have so far that tells us how an accident can happen on this stretch of highway.

“Many Penampang folks, including myself, have brought up the issue about the condition of this highway from the first day of its upgrading (which started a few years back) such as the creation of signage/warning signs, U-turns, streetlights, drainages and so on – the local authorities and office of the Penampang member of parliament have worked cohesively in attending some of the issues when WarisanPlus was in power but it doesn’t seem to be the situation anymore.

“Even in my village, lorries belonging to Pan Borneo Highway contractors that use the Ramayah-Putatan road had caused great damage to our road and despite multiple notifications by the  Penampang MP’s office to the authorities, no definitive and satisfactory actions have been taken to repair our road.

“Hence I hope the Minister of Work, Datuk Seri Bung Moktar Radin will look into the predicaments faced by us on these two issues,” said Tony.

Meanwhile, Penampang MP and Moyog assemblyman Datuk Darell Leiking who is also the deputy president of Warisan, said the fatal accident at Kampung Nambazan was very tragic and proposed for a dialogue between the elected representatives, senators, stakeholders, the authorities and the State Government to find ways to resolve the predicaments faced by the people in that area.

“My thoughts and prayers go to the family of the deceased. I believe that it will be a grave injustice on my part and the rest of the representatives of this district and other authorities empowered to make the final decision, not only to the deceased’s family but also to the families of those who perished due to accident on this highway, if we do not discuss on the matter together publicly with the affected stakeholders so as to prevent any unfair loss of life or limbs by others in the future due to our own indifference.

“Many issues affecting the Moyog folks have indeed been extended by my office to the relevant authorities but sadly, some have not been attended to effectively and efficiently, causing the people to bring their grievances and grouses to the social media, and this is causing unfair stress and demotivation to some of our honest civil servants.

“Hence for this matter, my office will arrange to call for a dialogue, either virtually or by SOP-complying face-to-face event, which ideally be attended by other people’s representatives in this district, grassroot leaders, stakeholders and governmental authorities to discuss over these issues and find ways to overcome matters that relate to the people’s safety and wellbeing in a non-partisan and most conducive ways,” he concluded.

Jimmy Masadim from Kampung Tigawan Darat, Kota Marudu was killed when he was knocked by a runaway lorry along old Jalan Nambazan, near the Quality Broadway Sdn Bhd factory, on Thursday afternoon.

The 33-year-old food delivery rider died at the scene due to severe head and body injuries in the 1.50pm incident.

The deceased, who was also attached with the Kota Kinabalu Police Volunteer Reserve Unit, was believed to be making a delivery when the lorry driver allegedly lost control of the wheel due to slippery road, before driving over a road divider and into his path on the opposite lane.

Jimmy was thrown from his motorcycle due to the impact, while the lorry also knocked several vehicles parked by the side of the road.

The lorry ended up in a drain, pinning the 29-year-old lorry driver to his seat. He suffered minor injuries.