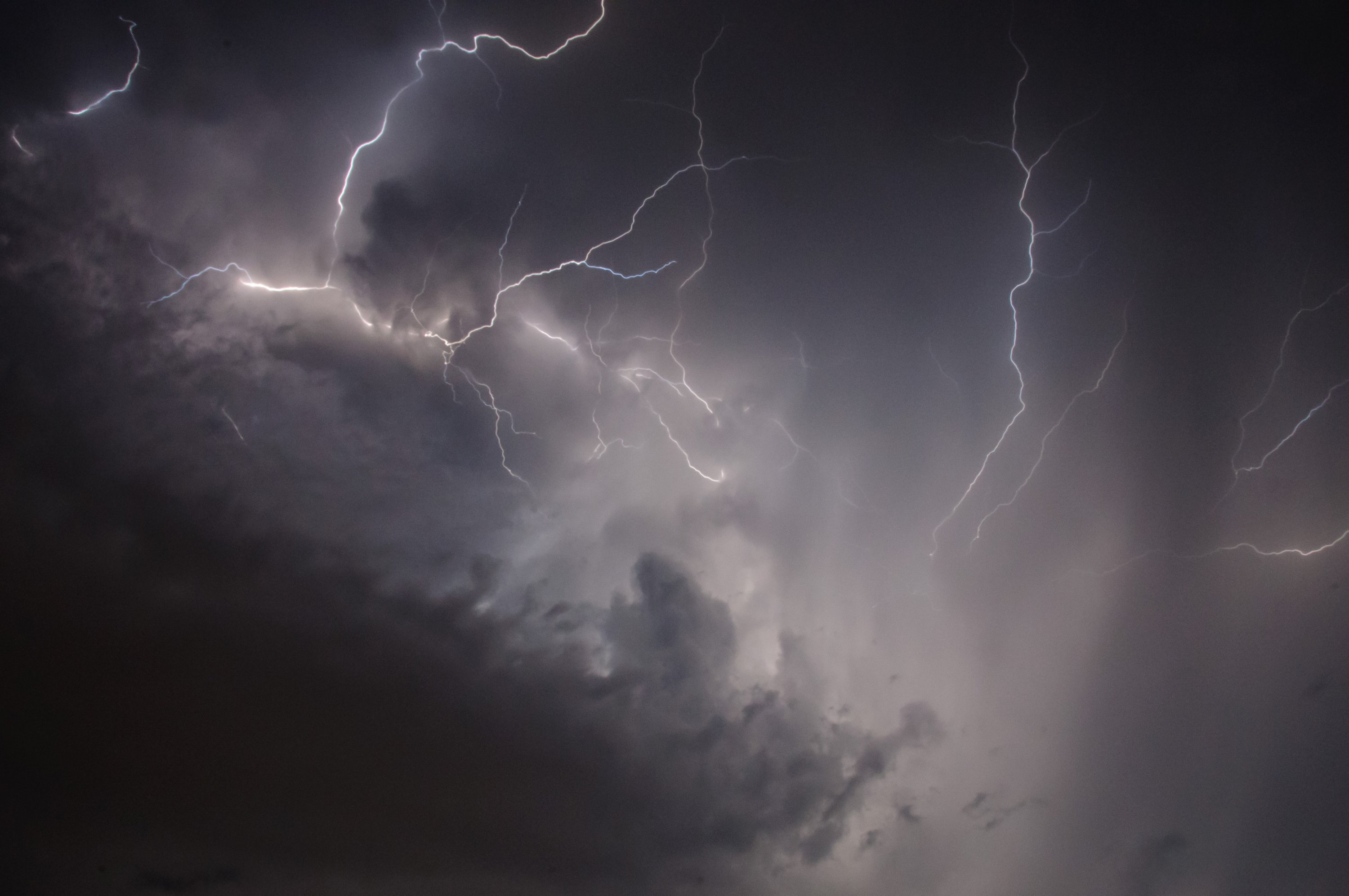 Cloud to cloud lightning occurs entirely within the cloud.

EVERY second, there are about 40 to 50 lightning flashes globally, adding up to 1.4 billion a year. These flashes form when cumulonimbus clouds (towering clouds up to 10,363 metres high) become charged with electricity. If the charge becomes strong enough, giant sparks leap from the clouds to the ground. The immense heating from these explosive flames of lightning also generates thunder.

Malaysia is ranked third in the world for the highest lightning activity behind the USA and Columbia. Between 2009 and 2019, 22 deaths were recorded from lightning strikes in Sabah and 21 in Sarawak.

Lightning is a huge electrical discharge that flows between clouds, from a cloud to the ground, or from a cloud into the air. There is no consensus of opinion about how the discharge originates but the leading theory is that it is related to hail and smaller particles falling through ice crystals and super-cooled water droplets.

Heavier, negatively charged ice crystals gather in the lower reaches of the cloud while lighter, positively charged crystals gather at the top, effectively forming the opposite poles of a battery. The heavier, negatively charged create a potential difference between the bottom of the cloud and the positively charged ground beneath it. When the electrical charge within the cloud reaches a certain critical point, electrons flow between the two areas of opposite charge to establish a channel to the ground. The lightning heats the surrounding air to 30,000 degrees Centigrade, making the air expand rapidly and thus sending a shock wave rippling away, which we hear as thunder. All lightning is produced by the build-up of electrical charges within clouds, but viewed from ground level, it can take various forms.

About 80 per cent of the global total of lightning takes this horizontal or near horizontal form occurring entirely within the cloud as electricity is discharged from one part of the cloud to another or between neighbouring clouds without contact with the ground. It may light up the cloud from inside as sheet lightening or appear as visible strokes flashing across the flat ‘anvil’ bases of thunderclouds. They often generate multiple strokes which can be seen as a thundercloud passes overhead or begins to break up. This form of lightning is especially common in Borneo’s climate where, by day, water is quickly evaporated and rises in convectional bubbles of hot air into the atmosphere. Large cities such as Kuching and Kota Kinabalu, because of their urban structures, especially lend themselves to this.

Its frequency is dependent upon cloud cover and it will take a vertical or horizontal motion. This form of lightning is the type most commonly observed from the ground and usually takes the form of a lightning strike. It occurs when the strike is obscured by cloud so that the entire sky flashes white. The hidden flash may be cloud-to-ground or cloud-to-cloud. This is often seen at night time in Malaysia. 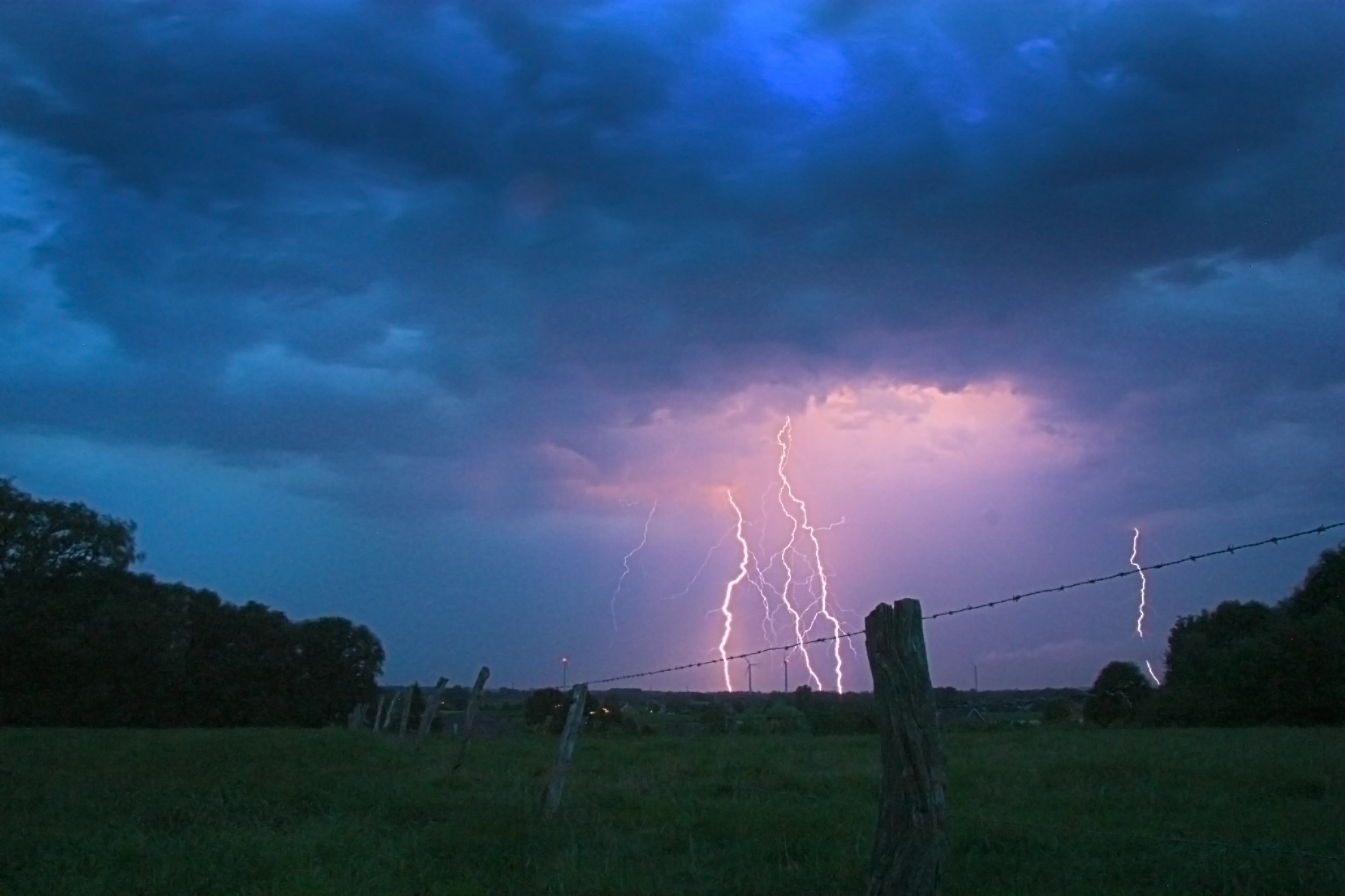 Cloud to ground lightning is vertical or near vertical in motion.

Vertical or near vertical in motion, it frequency makes up 20 per cent of the global total of lightning activity. It starts within a cloud when the potential difference reaches three million volts per metre. A rush of electrons flows out of the cloud base towards the ground in a series of extremely short zig-zagging steps known as a ‘stepped leader’.

When nearing the ground surface, a current moves up from the exposed object, such as a tree or very tall building, to meet it. The leader is invisible; what we see is the flash of the return stroke that flows back up the path of the stepped leader as strike lightning. Forked lightning occurs when the stepped leader is one of a few strokes that make contact with the surface. A typical lightning flash consists of a few leaders, each followed by a return strike.

Its frequency is very uncertain with but a few thousand examples reported. Taking the form of a brightly luminous ‘ball’ of plasma, most sightings have occurred in thundery conditions and the ball descends from the thunderclouds at the same time as the lightning stroke, appearing to float slowly through the air or to dart around. Unlike other forms of lightning, it may last for several minutes. It has even been known to enter buildings. How it is formed is still not known for certain, as data is very scarce.

Most lightning strikes come from the negative part of a cloud. However, occasionally a strike can come from the positively charged top of a cloud — hence positive lightning. This particular type has to bypass the negative charges at the base of the cloud, so shoots out sideways, sometimes travelling 2km or more away from the storm cloud. It then connects with the ground and is often called ‘a bolt from the blue’. Positive lightning looks the same as the negative variety but is often more powerful and thus dangerous. 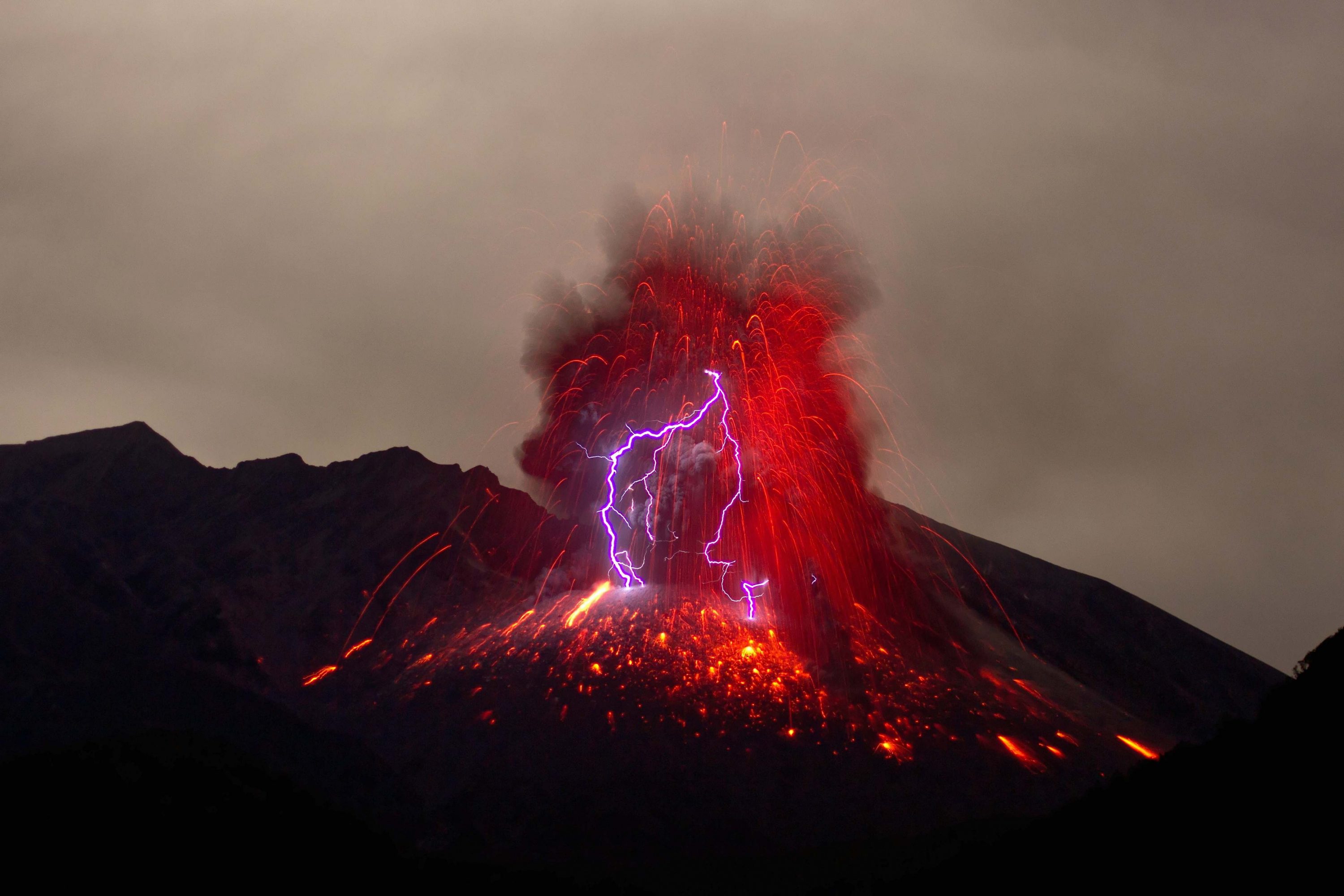 Numerous examples of this form of lightning have been observed at night when the temperature falls on the recently erupting Indonesian volcanoes with their explosive outpourings of ash and magma. Water vapour from a volcanic eruption can generate a build-up of energy in an ash cloud, much in the way in many lightning forms. The charge can grow large enough to produce lightning, which can result in spectacular displays within the ash cloud. Much though depends on the humidity of the air, as I have witnessed on Mount Etna in Sicily.

St Elmo’s fire appears as a bright blue glow around objects such as ship’s masts, spires, and on aircraft wings. Named after St Erasmus of Formiae, the patron saint of sailors, this phenomenon sometimes appears on ships at sea during thunderstorms, and was once regarded by sailors as a sign from God. It occurs when the electrical charge associated with a thunderstorm can cause ionisation of the air molecules around an object, producing a faint glow as the oxygen and nitrogen in the air fluoresce with a blue or violet light.

Actually, I have witnessed this strange form of lightning twice in my life. The first occasion was when the Great Storm (October 1987) passed over my house in Southwest England with its hurricane force winds and torrential rain. It ripped a third of the roof tiles from my house and then subsided. The night air became bone dry and from my bedroom window I saw St Elmo’s fire ‘dancing’ in blue flashes along a farm field’s aluminium gate.

The second time it occurred on a flight to Kuala Lumpur over the Gulf of Thailand when tremendous turbulence hit the plane as it flew through a towering cumulonimbus cloud. Looking out from my window seat, I saw St Elmo’s fire dancing on the aircraft’s wings!

Don’t believe the old adage that, “Lightning never strikes twice in the same place”, for it can strike in its various forms anywhere and at any time. Be totally wary of lightning when outdoors.