Wednesday, July 28
You are at:Home»Features»Hong Kong’s urban farms sprout gardens in the sky 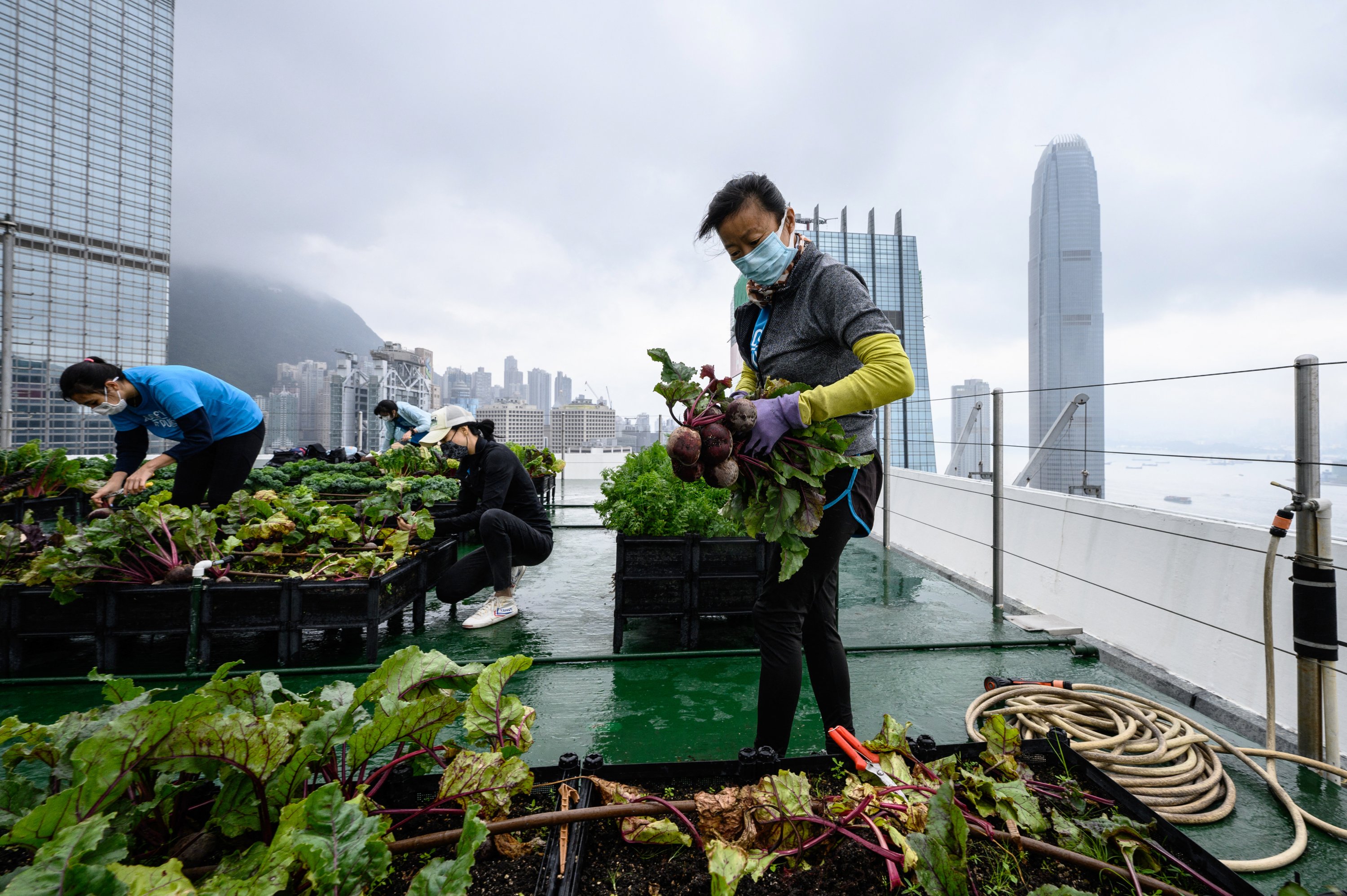 In this picture taken on April 9, 2021, Rooftop Republic urban farmers harvest vegetables grown on a rooftop farm at the top of the 150-metre tall Bank of America tower in Hong Kong. — AFP photo

HONG KONG (July 9): With their heads in the clouds and their hands in the soil, a group of office workers are busy harvesting the fruits of their labour on the roof of a Hong Kong skyscraper.

Invisible to those below, a sprawling garden of radishes, carrots and rhubarb is flourishing at the top of the 150-metre tall Bank of America tower, a stark and colourful contrast to the monotone shades of concrete, steel and glass of the city’s financial district.

The farm is among more than 60 that have sprouted across the space-starved city since 2015 — on decommissioned helipads, shopping mall rooftops and public terraces — thanks to initiatives like Rooftop Republic, a local social enterprise which promotes urban farming.

Cofounder Andrew Tsui sees the rooftop farms as a way for people to reconnect with how sustainable food can be produced in what he calls the current “instant-noodle city lifestyle” that sees so much waste.

“What we are looking at is really how to identify underutilised spaces among the city and mobilise the citizens, the people, to learn about food,” the 43-year-old told AFP during a blustery site inspection of the skyscraper’s garden.

Tsui believes Hong Kongers need to re-establish a relationship with what they eat that has been broken “since we started outsourcing our food and relying so much on industrialised production.” 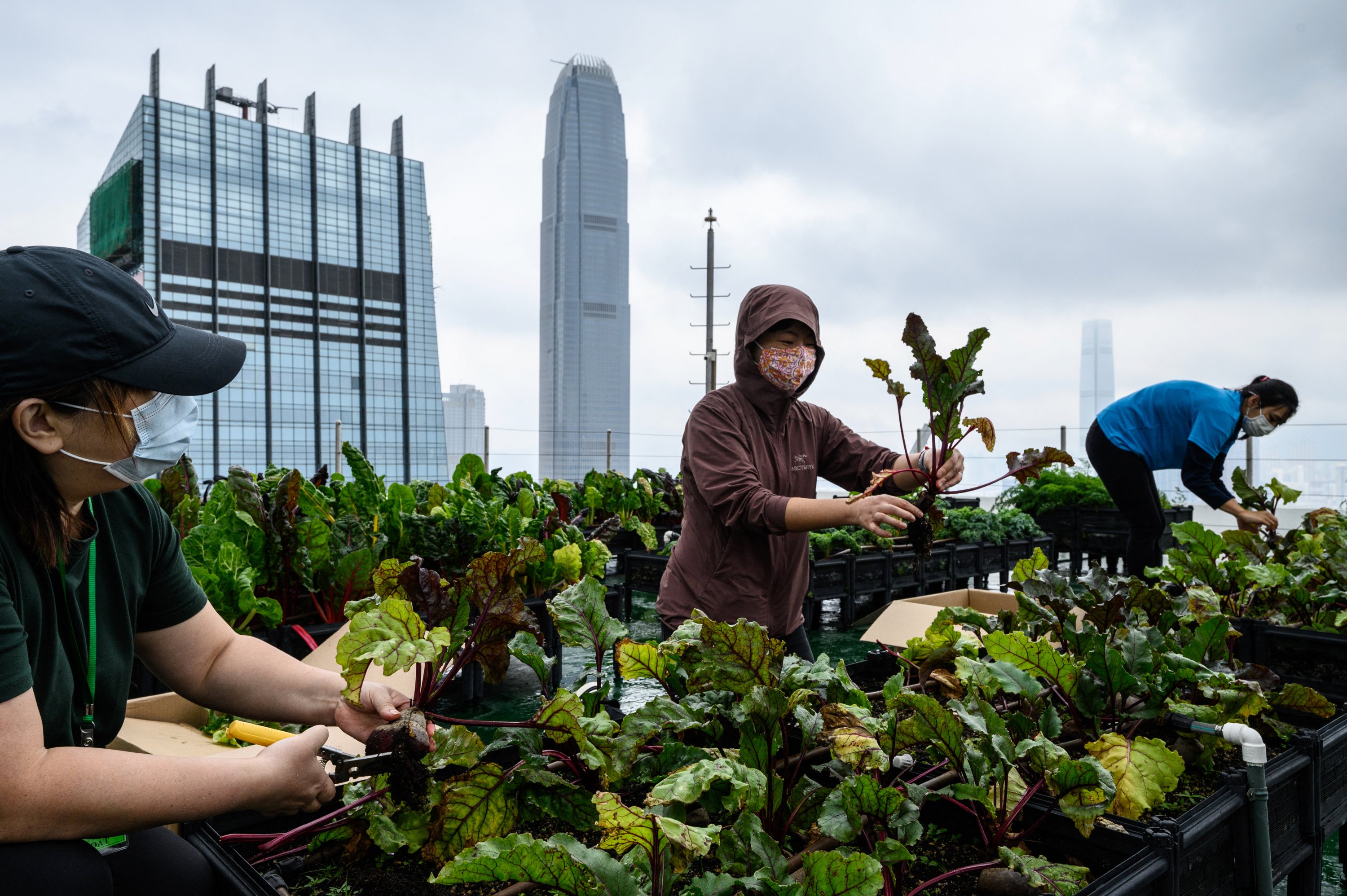 More than 60 farms have sprouted across Hong Kong since 2015 — on decommissioned helipads, shopping mall rooftops, and public terraces. — AFP photo

According to government statistics, Hong Kong throws out some 3,500 tonnes of food waste a day — the equivalent weight of 250 double-decker buses. Less than a quarter is recycled.

And around 90 per cent of the food eaten by the city’s 7.5 million inhabitants is imported, mostly from mainland China.

But while Hong Kong is one of the most densely packed places on earth, there is still considerable space to grow food locally.

“So we could have the potential of doubling the supply of land for growing food,” he said.

“The challenge for us is to design urban farming as a lifestyle to integrate into our daily life,” he added. “And the first step for that, of course, is to be accessible.”

To incorporate urban farms into the blueprints for office buildings, Rooftop Republic closely collaborates with architects, developers and property managers.

Major companies are signing up.

As well as the Bank of America garden, financed by property consultancy giant JLL, Singaporean banking giant DBS has partnered with Rooftop Republic to set up an academy that runs workshops for beginners as well as professional courses.

“In Hong Kong, most of the people focus on the commercial value of the properties. But we want to promote the concept of sustainability,” said Eric Lau, the group’s senior director of property management.

In this picture taken on March 24, 2021, people visit the Sky Garden, a 1,200 square-metre rooftop garden on top of the Metropole Plaza shopping mall in Hong Kong. — AFP photo

Urban farmers say the projects also help build community spirit among those who cultivate the crops.

After retiring from the public service, Lai Yee-man said she turned to farming to connect with nature and her neighbours.

The 60-year-old initially learned techniques and tricks from professionals to develop her farming plot in the New Territories region of Hong Kong — a rural area close to the border with mainland China.

But now she is passing on her knowledge to fellow residents working the Sky Garden, a 1,200 square-metre facility on top of a mall.

There residents cultivate edible flowers and fruit trees and can attend lifestyle classes like mindful gardening.

“Here, we teach them not to waste … and to cherish their food,” she explained, adding that the majority of what the mall farm grows goes to local food banks.

Tsui recognises that few young Hong Kongers currently have an interest in learning how to grow food.

But younger people are often concerned about the environment and climate change, so the opportunity to generate enthusiasm is there for the taking.

“If coding is the skill set to learn for the 21st century, growing your own food is a necessary new skill that we all need to learn to ensure a regenerative and green planet,” he said. — AFP