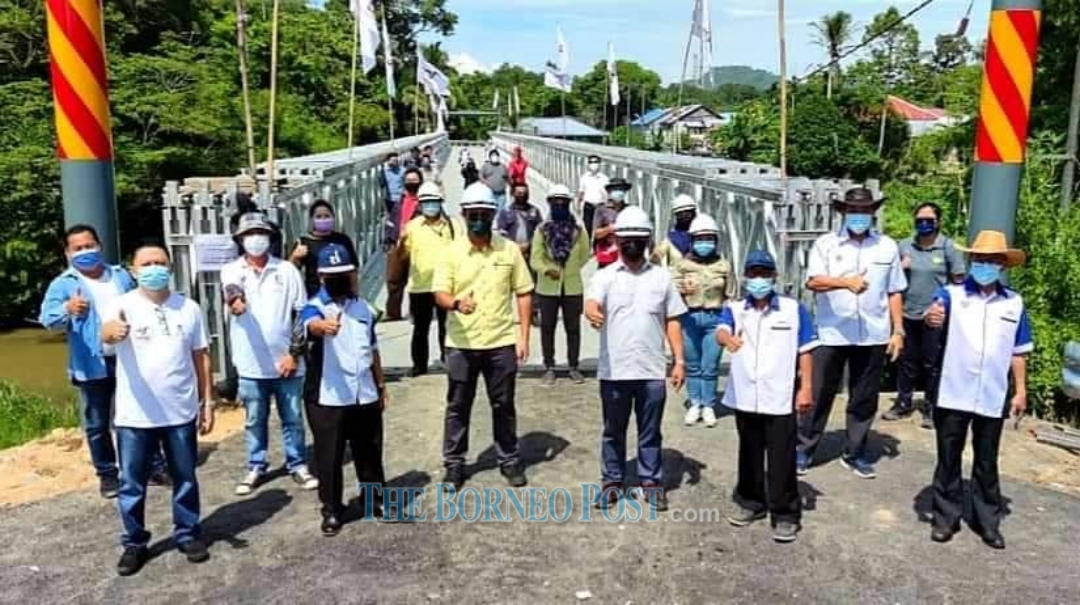 Syahril (fourth left) and Henry (fourth right) with JKR officers and community leaders for a group photo at the bridge.

BAU (July 11): The newly completed RM3.88 million bailey bridge connecting Musi to Buso the two villages on the opposite banks of the upper reaches of Sungei Sarawak Kanan in now open for public use following Certificate of Practical Completion (CPC) inspection carried out recently by Pubic Works Department (JKR) Sarawak.

He explained that following the CPC inspection, the bridge was handed over to JKR Kuching Division for operation and future maintenance.

Meanwhile, JKR Sarawak Corporate Communication in a statement said the completion of this bridge has benefitted the local folks especially from Buso-Musi area.

“Now they can safely travel to town and send their children to school.

“The bridge will shorten the travel time and provides convenient and safer crossing of the river. Previously, the only means for the local folks to cross the river was by boat,” it said in a statement..

Also present during the handing over of the bridge were Tasik Biru assemblyman Dato Henry Harry Jinep, community leaders from Kpg Buso and Kpg Musi as well as the contractor for the project.

Meanwhile Henry on behalf of the constituents thanked the state government for the construction of the bridge.

The Buso-Musi Bridge project was approved by the Chief Minister Datuk Patinggi Abang Johari Tun Openg during a walk-about in 2016 when he was the Deputy Chief Minister.

The project started on March 4, 2019 but it completion was delayed by the Covid-19 pandemic.

According to previous news reports, this project is the first in the state to use a design from China.

The allocation of the project was RM5 million, with the remaining amount be used for putting up safety features within the area near the bridge.