Monday, September 27
You are at:Home»Sports»Football»English fan frenzy turns to misery after Euro 2020 final 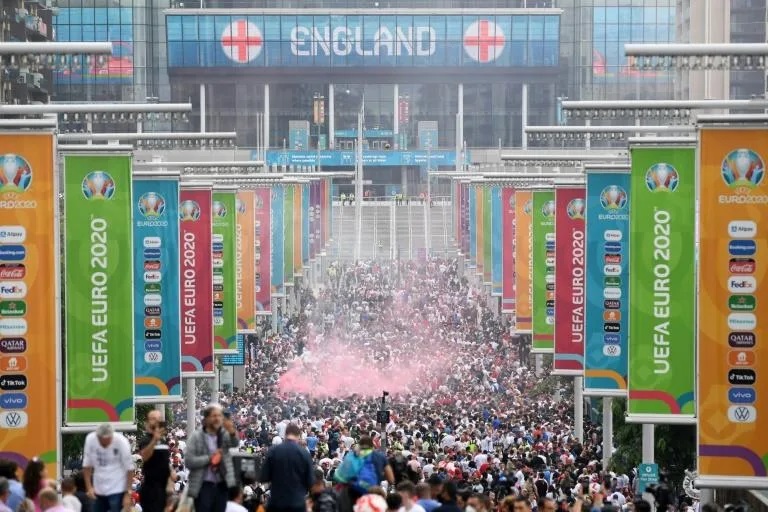 England descended into despair late Sunday, as the football-mad country lost after reaching its first major tournament final in over half a century — once again falling short of glory in a penalty shootout.

Fans inside London’s Wembley Stadium and in packed out venues across the country were left in misery after England’s hunt for its first top trophy since 1966 ended in bitter disappointment.

“It was the first chance we had in ages. But it’s sport, even if it’s disappointing, the players didn’t disappoint me at all, they were great,” he said, before adding: “I’m gonna get drunk and go home.”

Raucous supporters had roared the team on from inside Wembley and at fan zones, pubs, restaurants and living rooms nationwide following a day of frenzied anticipation.

However, the country’s hosting of the Euro 2020 final was marred by scenes of violence in the British capital, after hundreds of fans tried to storm into the stadium and “a small number” managed to gain entry.

Security officials reportedly tackled some intruders to the ground inside the venue, while footage shared on social media showed supporters fighting each another on concourses within the ground.

Earlier, drunken fans outside had thrown projectiles — including rucksacks, flares, cans and traffic cones — through the air and chanted aggressively at rival supporters.

“A number of officers remain on duty, helping fans leaving #Wembley or central London. We are there to look out for your safety,” the force said on Twitter.

Long before the heartbreak, tens of thousands of supporters — many draped in red and white English flags — had packed the famous approach to Wembley, singing songs, drinking beer and savouring the momentous occasion.

“I want my son to experience the atmosphere… it was not something I wanted to miss,” he told AFP, confiding his son would be missing school Monday.

The team — nicknamed the Three Lions — have not won a major competition since the 1966 World Cup, and ending the 55-year wait would have represented a cathartic moment for the nation.

In a sign of the enormity of the occasion for expectant England fans, many began converging on their chosen venues to watch the game in towns and cities across the country from early Sunday morning.

Pictures posted on social media showed long lines of people queuing to get into pubs from south London to Northern England.

Drunken supporters gathered en masse in Leicester Square and at several major railway stations, but as the day dragged on there were chaotic scenes there too.

Police reported “multiple cases” of flares being set off inside London stations and people “jumping off street lamps and hoardings”, risking injury.

Around 1,500 people who won tickets via a ballot watched the game on a big screen in Trafalgar Square, where the atmosphere soon soured after full-time.

Disgruntled fans could be seen smashing bottles and overturning bins in the street, kicking and smashing fencing while some swore and acted aggressively towards one another.

At the Howl to the Moon pub in east London, 24-year-old Francesca was among those left crest-fallen.

“Before the penalties, it was looking like football was coming home but well, England is not good at penalties,” she said.

“We need to celebrate something after this horrible year of covid.”

Fellow despondent drinker Loren Heer, 32, felt the best team did not necessarily prevail after more than 120 minutes of the final.