Thursday, August 5
You are at:Home»Lite Stories»‘T-Rex’ appears at Kuching PPV to get vaccinated, hilarious vaccination guidelines for ‘dinosaurs’ follow (Video) 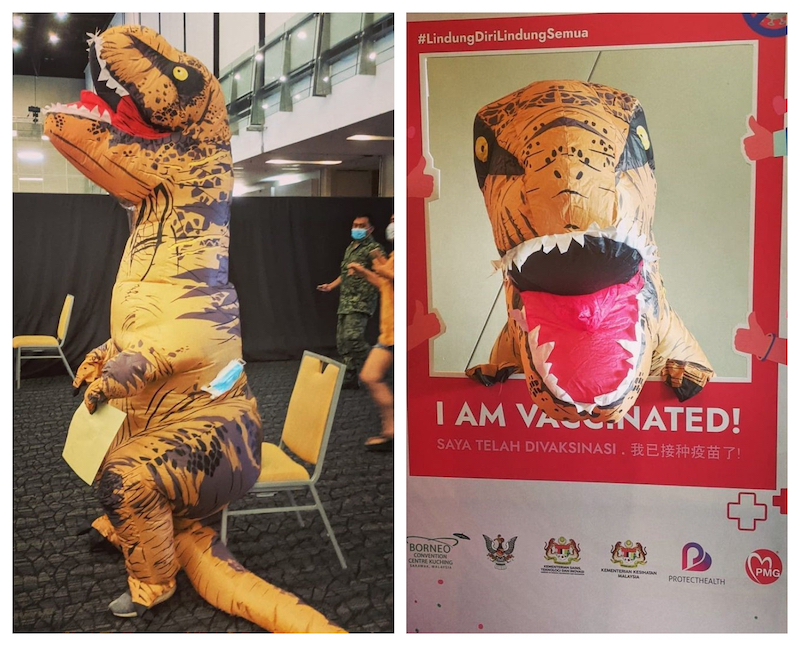 Sia, in his T-Rex costume, entertained many at the Kuching PPV with his costume. — Pictures via instagram/kennysia

PETALING JAYA (July 13): Kuching man Kenny Sia was the focus of many at the Kuching Covid-19 vaccination centre when he appeared as a T-Rex.

Posting a video on his Instagram, he documented the Covid-19 vaccination guideline. Instagram captions included rib-tickling quips like how he had to resist “not eating human beings” and remembering to sanitise his “claws”.

Sia, founder and director of Level Up Fitness told Malay Mail he was inspired to wear the suit after the story of the senior citizen in Penang who wore a plastic bag over his head to get his vaccination went viral.

“I really wanted to bring cheer to the frontliners and volunteer workers as they have so many people to administer the vaccines on a daily basis.

“Also the suit served as an ideal personal protective equipment as well.

“Surprisingly, when I went to Kuching’s Borneo Convention Centre, the frontline workers and volunteers played along and acted as if I were an ordinary person.”

Many took pictures of him and there were those who even complimented him for creating a pretty “historic” appearance.

He said that the costume was one that he got for his five-year-old son and the duo would often dress themselves up and play superhero and villain.

Asked how he managed to cope in the costume, Sia said that he was able to do so as his vaccination date was towards the end of yesterday and he didn’t have to queue up for a long time.

“My costume has a zipper so it was easy for me to pull down the zipper on one of the costume’s arms so that I could get the vaccine.

“The costume has a small fan too so I was not feeling stuffy with its proper ventilation system,” he said.

Apart from the T-rex costume, a man in a Naruto outfit was also spotted in Stadium Bukit Jalil’s PPV centre on Sunday. – Malay Mail