Thursday, August 5
You are at:Home»Features»Committed to sharing through caring

For all the difficulties that this social activist has gone through in her own life, her role as the backbone of her family has shone through.

SELF-MADE social activist, Manjeet Kaur Sidhu, identifies parenting and her involvement with the Sikh community as the inspiration for her labour of love in society. Through these activities, she was exposed to charity work and the teachings of Waheguru Ji in her growing up years.

A single parent for 27 years, she has raised four sons, coped with the death of Trishenjit Sidhu, one of her twins who perished in a car accident at the age of 22, and taken pride in putting her children through university.

Manjeet had also been a caregiver to her frail nonagenarian grandmother for three years, and as a filial daughter, she knows how it is like to care for a mother stricken with a serious illness – she had a taste of this when nursing her own mother, who later recuperated after an operation.

The highs and lows of her own life and her sensitivity towards others become a stimulus for her to carve a role in society and develop a positive passion for life. As a single mother, Manjeet runs a business to support her family, focusing mainly on her shop selling Bollywood apparel and accessories, souvenirs and handicrafts.

Worthy of note was her contribution to the Rainforest World Music Festival (RWMF) held in Kuching annually, for which she was awarded ‘Best Ticket Reseller’ for several consecutive years by the Sarawak Tourism Board (STB) – a feat that speaks volumes of her fighting spirit. Enterprising and active, Manjeet is never short of income-generating activities.

‘Give in, or rise with resilience’

“Life has to go on. With all the difficulties and hardship we face, we can either give in to despair and bitterness and be caught in them, or we can choose to deal with them and rise with resilience. There are many lessons we can learn from the intricacy of life.

“Dealing with the storms of my own life gives me the capacity to relate to the sufferings of others. I feel called to give back to society and to do more good,” she told thesundaypost in Kuching.

The councillor on the ground.

In the pursuit of her noble cause, she joined a political party where she soon headed one of its women’s branches. It was during her involvement with the party that she was appointed as a councillor with the Kuching South City Council (MBKS), making her the first Punjabi woman to hold the post. She remained a councillor for six years. As she had anticipated, the new sphere gave her a broader understanding of people’s problems and sufferings.

As a women’s leader in a political party, Manjeet made it a point to visit care homes and hospitals, particularly cancer and children’s wards, regularly. Often she had to dig into her purse to help poor patients who were in need of financial help, especially those who were from rural areas. Even to solicit donations among friends, she would, as the prime mover, be the first to contribute.

“It’s easier to walk the talk when it’s from the heart,” she pointed out.

Manjeet had made a personal commitment of giving back to society with resolute determination. One of her obvious traits as a councillor had been her relentless efforts in helping with reported cases. She would be quick to be on the ground. 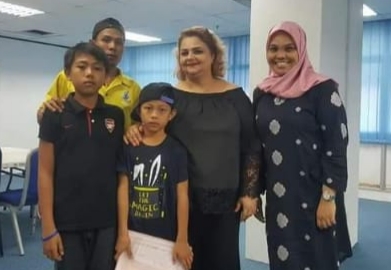 Manjeet (second right) works closely with the relevant ministry in helping stateless people in Sarawak speed up their application for citizenship. Seen next to her in this photo is a young woman with two brothers – they are among those whom Manjeet has successfully helped.

There was an occasion when she went out of her way to help a nine-year-old stateless child (born without birth certificate) get a place in a government school. It was not until recently that the Education Ministry of Malaysia (MoE) decided to give stateless children the chance to get an education while waiting for their personal document problems to be sorted out.

In her effort to help the child, she spoke to the principal, went back and forth to the Education Department and the school, and sought whatever help that she could find.

She was even nicknamed ‘Jeet Ganas’ (Aggressive Jeet) in the process, but she took it in good humour just as long as she could help the poor child get a formal education.

Her efforts paid off – after several months of drawing attention to the case, the child was finally enrolled in the school.

“It is not easy to come out of poverty. You need education to fall on to. My heart goes out to children who are denied basic education for not having birth certificates or simply because their parents are poor,” she said. 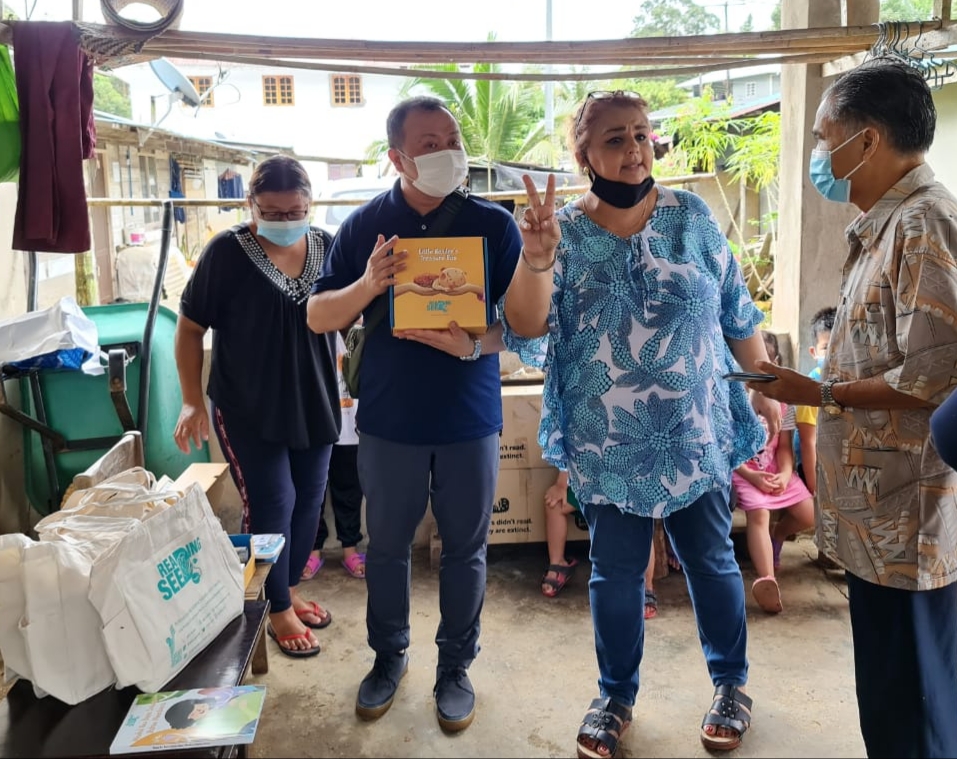 Since then, Manjeet has been working closely with the Ministry of Welfare, Community Wellbeing, Women, Family and Childhood Development in helping stateless people across urban and rural Sarawak speed up their application for citizenship.

She is also a familiar face at the ministry’s Welfare Department. Whether it is a case of a homeless person or an orphan or a poor single mother and so forth, she would be quick to refer their cases to the department.

It was in 2018 that she set up a society, Pertubuhan Pembangunan Insan Sarawak (PPIS) and became the founding president. The founding of the non-governmental organisation (NGO) was mooted by a friend whom she met while attending a business workshop in Ipoh, Dato Jasvinder Singh Dhillion. An ophthalmologist, Jasvinder was also the president of the Perak Pertubuhan Pembangunan Insan Sikh.

Manjeet’s inclination for service to humanity caught Jasvinder’s attention. Seeing her earnestness and potentials, the latter gave her the motivation to create a platform to further her service in the cause of humanity.

With his moral support, Manjeet took up the challenge and hence, the founding of PPIS.

“Now I have a solid platform. PPIS is a multi-racial NGO whose members are from all walks of lives and who are passionate about charity work. We managed to secure a small grant from Majlis Persosialan Sarawak last year in aid of our charity work.

“Since its inception, PPIS has been actively reaching out to the poor and needy folk, made possible for the most part by donations in cash and in kinds from the public,” said Manjeet.

During the long Covid-19 pandemic, Manjeet leads the society in joining other NGOs and concerned individuals in providing food to frontliners at hospitals, clinics and screening centres and also the army and police personnel who are manning roadblocks.

She also takes the opportunity to help single mothers and widows, those whom the PPIS has been helping to develop their income generating skills, by ordering the food from them. “The idea is to help the ladies to be self-sufficient even during the MCO (Movement Control Order),” she added.

Manjeet (left) in a discussion with the village folk in assisting a government agency to identify the needs of the community.

The impact of the pandemic on people’s livelihoods and health makes her feel she ought to do her part in whatever way possible to help ease the situation. Apart from delivering food, she leads members from her organisation to volunteer at vaccination centres as attendants and helpers.

“It is not how much we give, but how much love we put into it.”

Teaming up with other NGOs and religious groups, she went to several villages in and outside Kuching to deliver food baskets to families in need during the pandemic.

The social disruption caused by the Covid-19 has been devastating. Many households are suffering from income and job losses, and businesses are closing down.

“The handouts are not sufficient in the long run. They are only partial help for now. As we give, we also hope that the recipients would soon be in a position where they would no longer need donations.

“One may be a professional,” said Manjeet: “But there’s nothing wrong in trying a low-income job. It’s not the time to be choosy – just grab whatever job we can find.

“On the bright side, it is encouraging to see how people are willing to do just that to survive the difficult times. The income may be meagre but there is food on the table.”

Serving the cause of humanity gives Manjeet a better understanding of life.

In giving back to society, she learns benevolence and great moral values.

“As we help alleviate the sufferings of others, we become better human beings.

“Reaching out to the underprivileged, the destitute and the sick increases our empathy and love for our fellow human beings regardless of their colour, race or religion.

“And it gives me more confidence to do the job better.”

The saying, ‘charity begins at home’ is evermore true. For all the difficulties that Manjeet has gone through in her own life, her role as the backbone of her family has shone through. Today, as a mother of three working adult children and a filial daughter to her mother, Manjeet remains true to charity at home as she reaches out to others. 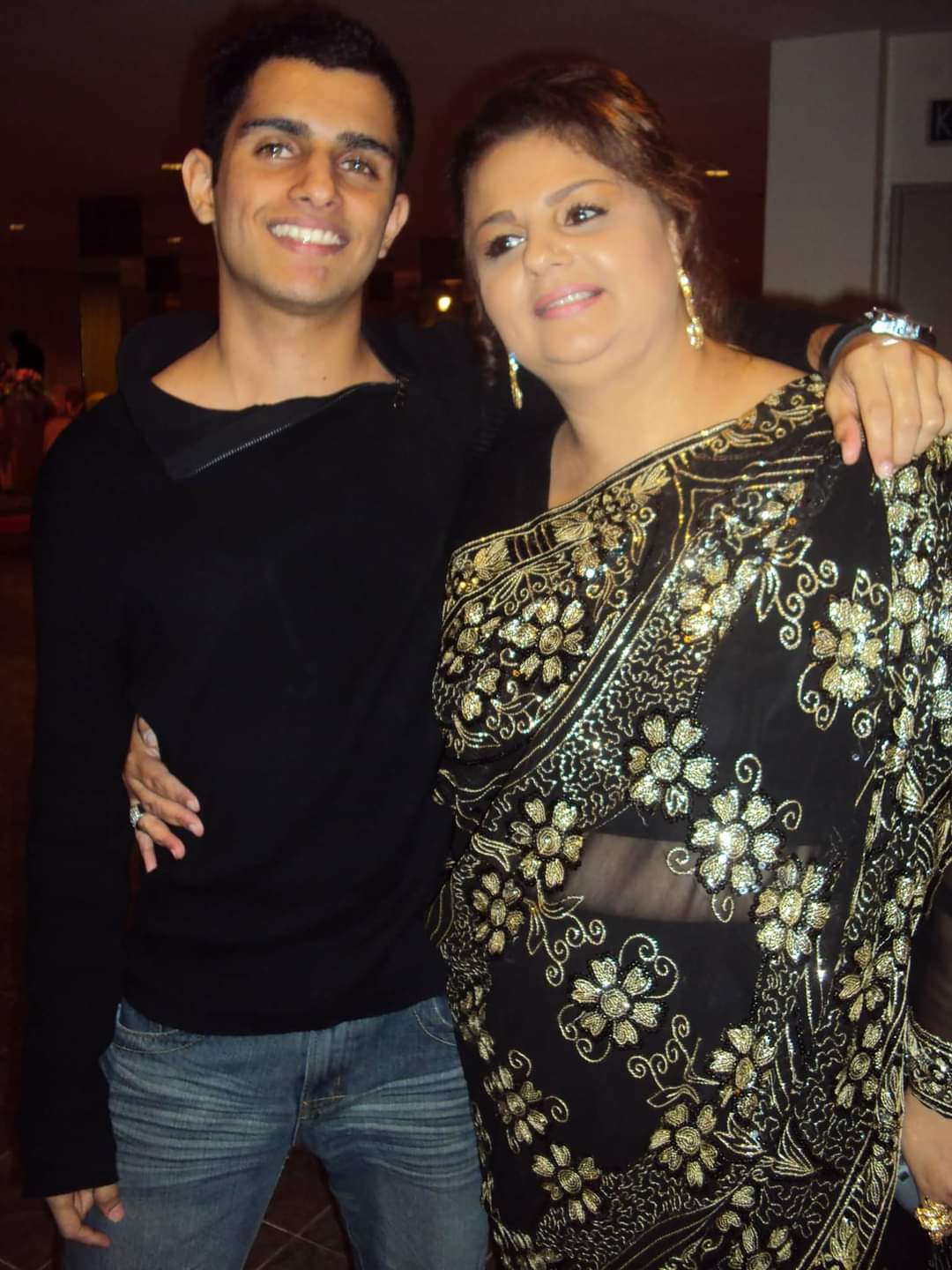 Photo of Manjeet and her son Treshenjit Sidhu, who perished in a car accident at age 22.

Having carved a purposeful role for herself in society, she continues to serve passionately the noble vocation that she has embarked on since her children were small.

“We don’t need to be rich to be able to help others. Even if we’re poor, we still can be of good use – as long as you have the desire, you can do it,” said Manjeet.