Monday, November 29
You are at:Home»News»Sarawak»For some in Sarawak, quest for citizenship is unending 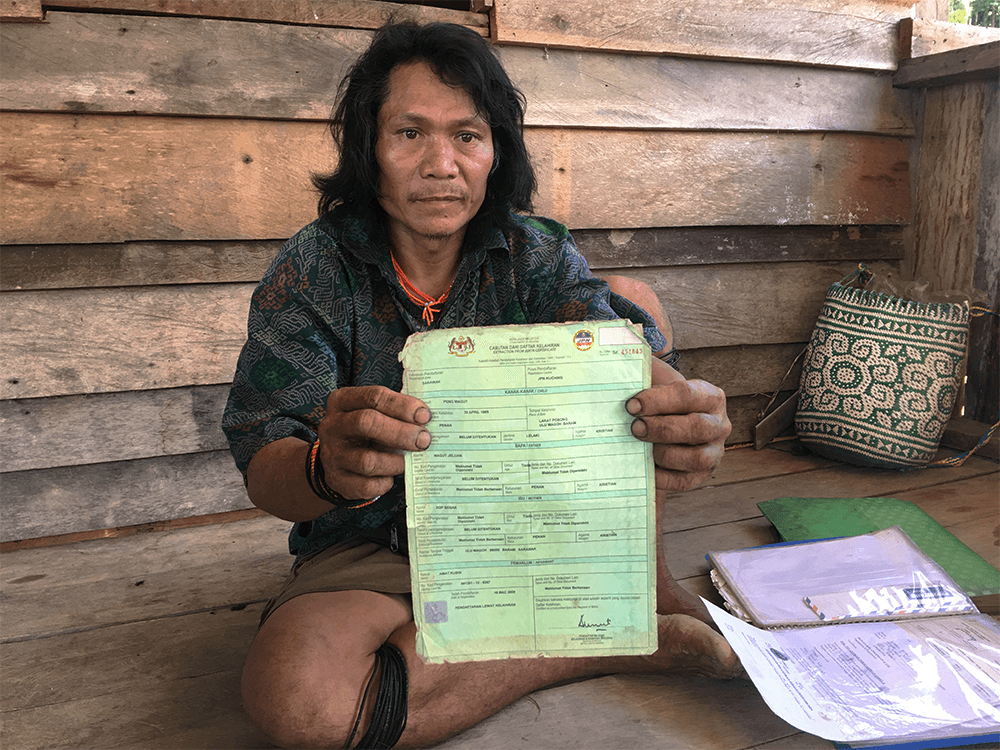 Peng Magut holds up his birth certificate which states that his parents and his own citizenship are unknown.

This article was written as part of the Kiniacademy Investigative Journalism programme. Field interviews were conducted in September and October last year. For the full story, log on to https://fijiasia.com/. Watch the video of this story at https://youtu.be/u7JNEnP8jsk

MIRI (July 18): Sarawak has prided itself as a state that has kept away illegal immigrants but in its own backyard, it finds itself in a bind with a host of problems related to its own people.

Many indigenous people remain stateless, especially the Penan who have been waiting for decades to be accorded citizenship of the country and to be recognised as citizens of Malaysia.

Long delays and excessive bureaucracy on the part of the National Registration Department (NRD) has left many applicants in the lurch and their citizenship woes run into three generations.

The issue has been made difficult by their nomadic culture and compounded by rural poverty; illiteracy as most Penans cannot read nor write in Bahasa Malaysia; and as almost all cannot afford the luxury of travel.

The Penan is the last nomadic indigenous group residing mostly in Baram, Belaga and Ulu Limbang. The State Planning Unit in 2010 estimated 77 per cent of Penans have settled permanently, while 20 percent are semi-nomadic. The remaining three percent are still living nomads.

Those living in the heartlands of Sarawak do not possess birth certificates, any identification papers or MyKad.

According to Penan Affairs Department officer at Sarawak Planning Unit Ezra Uda, the Penan population stood at 21,367 as of 2019. But most of them do not have any form of identification papers to denote they are citizens, let alone enjoy the benefits of being classified as Bumiputera.

Their cultures, practices and lifestyles have been mentioned in passing in travel and tourism related articles but their trials and tribulations to getting recognition as citizens paint a totally different picture.

Peng Magut lives in Long Tevanga, a village at the border between Limbang and Baram districts. The terrain is beautiful, punctuated by the cool mountain air. But the village has no electricity, no running water, much less an Internet connection.

And without the luxury of owning a vehicle, for Peng and many others like him, it is a costly outing from the village.

Travel is expensive as there are no buses nor taxis. It costs RM1,800 to charter a private four-wheel vehicle for the drive from Miri to the Baram interiors.

It was God-sent when a roving task force from the Miri Special Mobile Unit (UKBM) and the NRD came to the village to help Peng register his own birth for the first time more than 10 years ago.

Peng, who is in his 40s, has made that application four times and after the first, the next three applications took a walk for three hours to other villages in Baram where such exercises were carried out.

The last time he made a late birth registration application was in 2019 but to date, he has yet to be informed of the status of his application.

“I travelled to Long Menging, Long Seridan, Long Lama, Limbang and Pa’ Adang. We travelled to these places on foot and after all these efforts, I have not heard anything firm about my application,” Peng said in his Penan dialect.

“Usually, they would tell me that my application is being processed or that they will tell me to wait for the news.

“I wonder that after 10 years, what has happened to my application. They (NRD) are working using computers, they should have done the work fast because we take up to two days to hunt for food in the deep jungle,” said Peng.

His wife, June Along and their two sons Rudy and David are also waiting for news on their applications.

While Peng and his entire family do not read or write in Bahasa Malaysia, Peng understands the importance of obtaining their MyKads.

Especially if that means being able to claim rights over ancestral land, besides a right to vote, access to education, healthcare, travel and very basic necessities.

Peng’s awareness is in part because of the Penan Empowerment Network (PENA) led by Chairwoman Elia Bit, and their work to educate the Penan community on these issues. 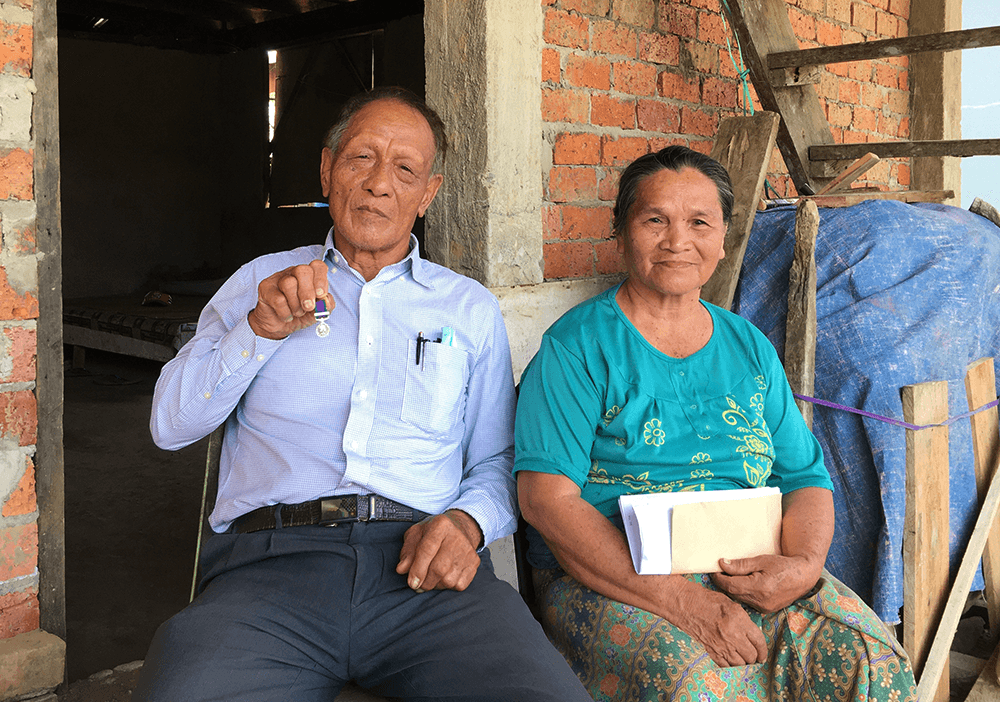 Basar Arun (left) and his wife at their house in Kampung Batu Mulong in Lawas.

In Lawas, Basar Arun, now 80, has been waiting for over half a century for the government to approve his citizenship application.

Although he was born in Indonesia, Basar had entered Sarawak through the Ba’ Kelalan border in the early 1950s for a better life.

Soon after, he volunteered to become a border scout and served during the Indonesian Confrontation in 1963.

For his contribution during the Confrontation, Basar was awarded with a General Service Medal with Borneo Clasp conferred by Queen Elizabeth II.

Basar previously held a temporary resident card (MyKas) before he was given the permanent resident (MyPR) status in 2013.

And it is not just Basar who is waiting for over five decades to be recognised as Malaysian citizens.

All seven served as border scouts and assisted the armed forces fight insurgents in the border area until 1974. They have been waiting for over 30 years for their applications to be approved.

They had been applying repeatedly for their status to be changed from permanent resident (PR) to Malaysian citizen but till this day, there seems to be no light at the end of the tunnel.

There are more than 120 Penan settlements scattered across the Baram constituency alone.

In the villages of Long Menging, Long Saliang and Long Balau villages, there are at least 20 confirmed stateless Penans.

But Long Menging Headman Kala Konet estimates there are at least 100 more within the wider Ba’ Magoh area.

Elia said that her organisation has established that about 200 Penans in Baram are either stateless or that their citizenship status is still undetermined.

The Chairman of Sarawak Dayak Iban Association Rajang (SADIA-Rajang) Bill Jugah said he collected about 200 applications for registration of birth from Balai Ringin, Sri Aman and Mongkos areas since 2016.

“Most of these cases had had their applications successful. However, I do not have the exact figures because they did not inform me of their status of applications,” he said.

Jugah has been collecting data on stateless individuals around the Sibu area as well.

These are persons excluded from “official government distribution list” when he was distributing aid when Covid-19 hit the area last year. Another 180 [stateless persons]had met with Jugah last October.

“I believe a thorough study on [the number of stateless persons]or an Inquiry Committee ought to be set up to study this issue,” said Lawyer Kamek for Change (LK4C) Director Simon Siah via email.

LK4C is a Kuching-based non-profit led by lawyers fighting for marginalised voices, including work to bring public interest litigation to a fore.

The issue of statelessness in Sarawak is compounded by rural poverty, access, and stigma that treat indigenous groups as second-class bumiputeras.

Jugah says the majority of those that are stateless also include the Iban, Kenyah and Kayan.

Even as people like headman Kala and Peng Magut are able to live comfortably through hunting and gathering, they deserve at the very least recognition from the state.

“We began to come out of the jungle and tried to lead a semi-nomadic lifestyle in the early 1980s. Some of us have adapted to the new living outside the jungle, but some still prefer the old way of living,” said Kala.

And when they do attempt to settle down in one area, they are threatened by people who claim to own the land they are on. 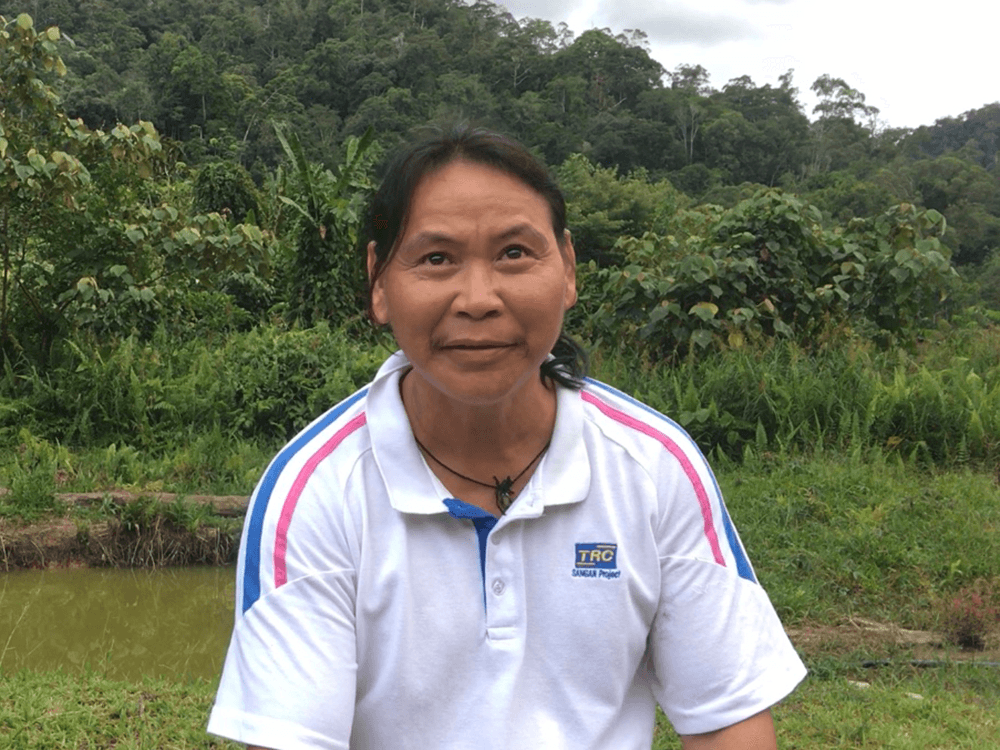 Kala said there were over 20 families in Long Menging that wanted to build proper houses to live in, including himself.

But he had been receiving threats from another family from a neighbouring village. The family, from a different tribal group, claimed that Kala and the Penans were occupying land that was not theirs.

“Initially, there were over 20 families here but because of the continuous threats and intimidation by those who claimed to have rights over the land, the majority of my people had no choice but to go back into the jungle. Many of them are undocumented,” said Kala.

The NRD through its UKBM unit had previously reached out to the Penan community, in particular in Baram to get them registered.

A Special Task Force under the state’s Welfare, Community Wellbeing, Women, Family and Childhood Development Ministry was also set up in 2016 to assist in the citizenship application process for those below 21-years-old.

The task force was under the purview of Sarawak’s Minister of Welfare, Community Well-being, Women, Family and Childhood Development, Dato Sri Fatimah Abdullah.

A source said that meetings were held every month between officials from the NRD office in Kuching and the special committee when it was still in force. They vetted applications but the results were nothing to shout about.

Over three years until July 2019, only 717 citizenship applications were submitted through the task force and it is not known how many were approved.

When the Pakatan Harapan took over the Government in 2018, there was a re-think on the policies. In July 2019, the then Home Minister Tan Sri Muhyiddin Yassin announced that there would be a Federal-level committee to handle citizenship applications, including those from Sarawak.

After another change in government in March 2020, it was reported that Fatimah would seek the assistance of the Home Affairs Ministry to revive the committee but nothing has changed.

Her office declined comment on the records being kept on the number of applications and their status. All that was said was that the final and sole decision still rests with NRD ‘headquarters’ in Putrajaya.

In April this year, Fatimah was quoted in the press that the special task force has been revived and will have its first meeting in late April to continue its previous role in solving citizenship woes. However, nothing materialised.

Meanwhile, Sarawak NRD would not reveal any data on statistics of stateless individuals nor would they release any information on the number of applications for citizenship received by the department.

Its Assistant Director (Operations) Ramzi Ibrahim when contacted said such data is classified and could only be released if there is green light from NRD Putrajaya.

It would be impossible to put an end to the issue of statelessness in the country if there are no statistics.

Although, there were many prior news reports in the last few years quoting various sources on the number of stateless persons in the country.

In October 2016, Malaysiakini quoted the then deputy Prime Minister and Home Minister Datuk Seri Ahmad Zahid Hamidi as saying that there were 290,437 stateless children in Malaysia who are below the age of 18. However, he did not give a state-by-state breakdown.

Elia said: “Due to remoteness, financial and logistical issues many of them chose not to register birth. Some do not even know the importance to register their marriage especially the older generation, hence leaving their children undocumented or born stateless.”