Thursday, August 5
You are at:Home»Lite Stories»Stuffed with love: bereaved pet owners turn to taxidermy in Pakistan 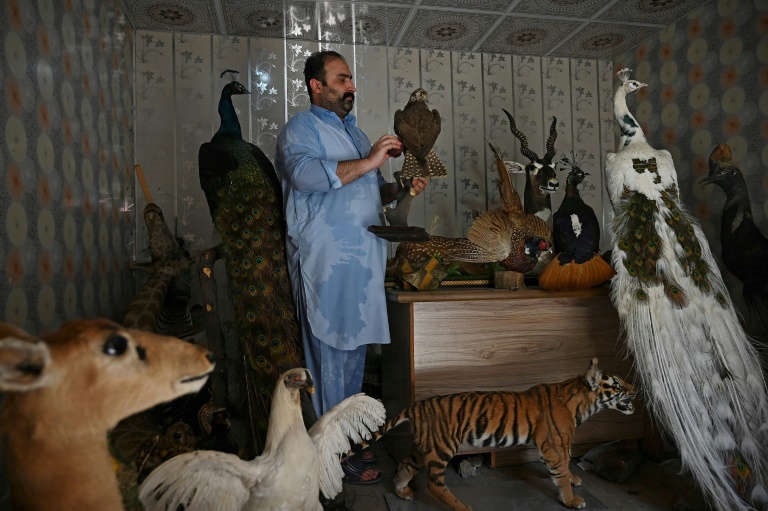 Surrounded by stuffed leopards, deers, parrots and cats, Jahangir Khan Jadoon sees his craft as both an art and a vital way to console those in pain. – AFP photo

Carefully preserving an animal takes patience and attention to detail — luxuries Pakistani Jahangir Khan Jadoon says he doesn’t always have when a bereaved pet owner rushes into his workshop.

“Sometimes an emotional customer will bring his dead pet with tears still in his eyes saying, ‘I can’t live even a night without him’,” the taxidermist tells AFP from his studio near the eastern city of Lahore.

Surrounded by stuffed leopards, deers, parrots and cats, Jadoon sees his craft as both an art and a vital way to console those in pain.

Some animals can take days to properly preserve while others take weeks, depending on the size and particulars of the animal.

First the skin is carefully removed, washed, and then exposed to the sun. The animals are then stuffed and carefully sown back together while their eyes are replaced with glass balls.

But there are times, Jadoon admits, when he has only hours to bring comfort to a distraught client, making the delicate process all the more difficult.

“Someone with a parrot or a cat will come and request us to preserve the pet as soon as possible. They say: ‘do it now’. So in such cases we have to apply extra chemicals. Even then it can take hours,” he adds.

Over the years, Jadoon has seen a wide range of species brought into his workshop, from rare leopards to a cassowary bird that lived in a Pakistan zoo for decades.

“I learnt this skill from my forefathers. My grandfather started it in 1918 after a deer died in Lahore’s zoo,” Jadoon tells AFP, saying that he has also stuffed his fair share of animals that merely serve as decorations for fancy homes.

A growing taste among elite Pakistanis for exotic pets — especially big cats seen as symbols of wealth and power — has also spilled over into his work.

“Most people prefer a cat or a dog, a parrot or a peacock as their pet. But nowadays, there’s a new trend of raising lions,” Jadoon says.

He has helped establish a collection at a university museum, where those studying ecology and conservation can learn more about the delicate trade.

“This type of museum provides an opportunity to the students,” said Arshad Javid, who heads the Wildlife and Ecology Department at the University of Veterinary and Animal Sciences in Lahore.

“They can see them here, they can identify the difference among the species.”

But dealing with a pet and their owners is a different matter and involves more than just a deep understanding of the art of taxidermy.

The act of preserving a pet can be cathartic for its owners but it is not always the panacea for coping with despair.

Hafiz Mohammad Fahim decided to stuff his family’s pet peacock following his sudden death after seven years of bringing joy to his children.

The peacock now serves as a “memorial”, even if his children are no longer able to to interact with it.

“My kids had an attachment with him,” said Fahim. “Now they are sad and ask why it is not moving.”  – AFP

Previous ArticleEarth’s richest man Bezos to blast off into space
Next Article Fauci: US might ‘still have polio’ if media back then opposed vaccine