Tuesday, September 28
You are at:Home»News»Sabah»37 issued compounds, 334 vehicles turned back in Sabah 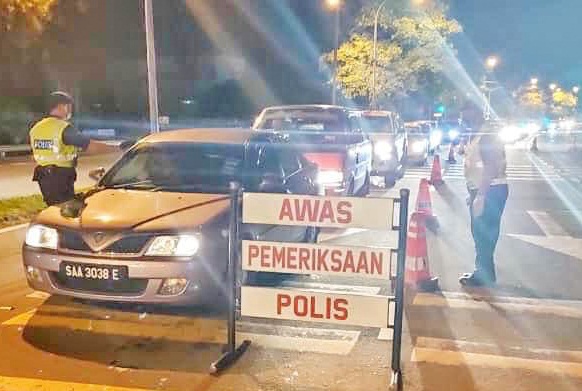 This included 21 individuals failing to register while entering a premises, eight exceeding passenger limit and four not complying with the Movement Control Order (MCO).

Minister-in-charge of Covid-19 matters in Sabah, Datuk Masidi Manjun, disclossed this in his daily statement on Tuesday, adding that 121 roadblocks were set up throughout the state during the Eid Al Adha eve.

A total of 46,701 vehicles were checked and 334 were ordered to turn back.
Meanwhile, according to a report from local authorities, 768 premises were checked under the control of the Local Government and Housing Ministry.

“One compound was issued in Sipitang after a worker did not scan for MySejahtera, while four notices were issued in Penampang and one in Sipitang.

“Kota Kinabalu City Hall has implemented SOP monitoring on 154 premises and 184 individuals in 18 areas, without a single compound issued,” he added.

Nationwide, a total of 5,594 vehicles were ordered to turn back at roadblocks nationwide since yesterday for flouting SOP set for interstate and inter-district movements.

Bukit Aman Internal Security and Public Order Department director Datuk Zainal Abidin Kasim said the number of vehicles ordered to turn back was among 456,019 vehicles inspected at the roadblocks.

“In addition, 355 compounds were also issued at the roadblocks for flouting the SOP of the movement control under the National Recovery Plan (PPN),” he said in a statement to Bernama on Tuesday.

On Sunday, Deputy Prime Minister Datuk Seri Ismail Sabri Yaakob directed security forces personnel to be prepared to face an increase in the number of vehicles trying to cross states without permission in conjunction with the Hari Raya Aidiladha celebration.

The government still does not allow interstate and inter-district movements in Phase One and Two of the PPN.