Wednesday, October 27
You are at:Home»News»Sabah»Bung also calls for speedy delivery of vaccines 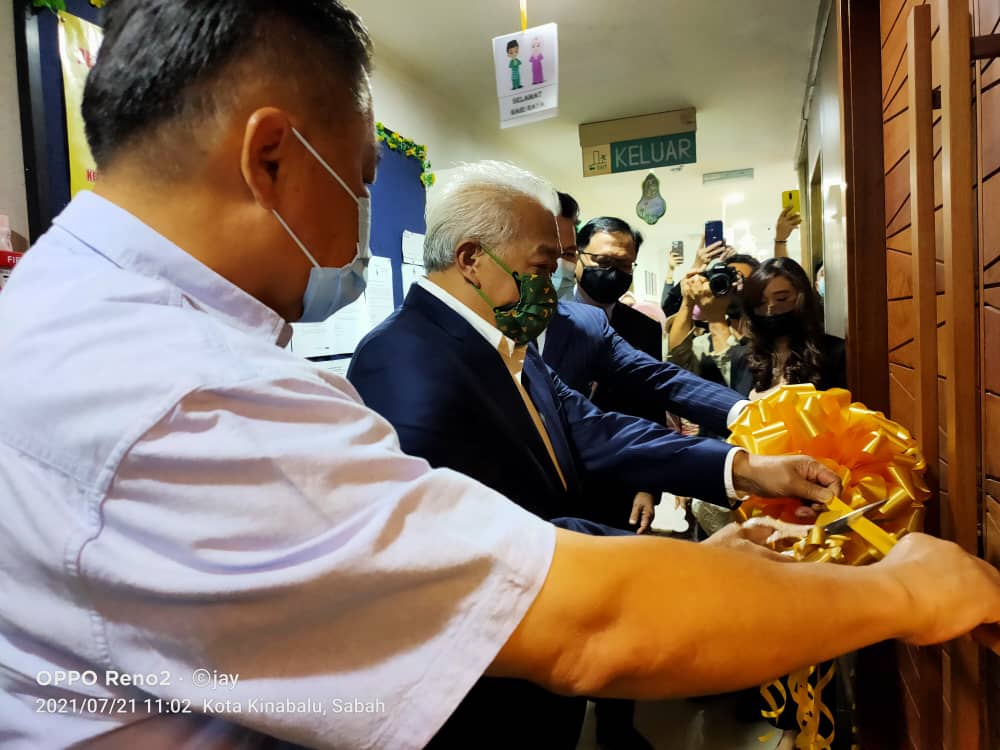 Bung (second from left) cutting the ribbon of the new meeting room at his ministry’s building.

KOTA KINABALU: The Central government, particularly the Special Committee Guaranteeing the Access to Covid-19 Vaccine supply (JKJAV) has been called to speed up the delivery of vaccines to Sabah to ensure the efficient vaccination process in the state.

Deputy Chief Minister Datuk Seri Bung Moktar Radin said that based on the data by the JKJAV special committee, Sabah has a low number of vaccine recipients for the first and second dosage as compared to other states in the country.

He said that this is worrisome and cited that Sabah has been experiencing an increase in positive cases over the last few weeks.

He explained that various approaches have been implemented in Sabah such as the launch of more vaccination centres (PPV), and the Covid-19 vaccination outreach programmes.

However, it would be difficult to reach the target if the vaccine supply is inadequate, he said.

Hence, he is calling on the central government and those involved, particularly JKJAV to act promptly by sending the much needed vaccine supplies to Sabah to reduce the gap with other states in the matter.

“As a representative of the people who aims for the people’s wellbeing, I am urging the central government to speed up the delivery of the vaccines to Sabah so that we (the state government) can vaccinate more people in the state. Health issues and the welfare of the people of Sabah must be made a priority,” he said.

“This issue cannot be delayed because we are facing a severe Covid-19 threat following the detection of a new variant that that is more infectious. Hence, we must form herd immunity to reduce the risk of infection,” he said after launching the meeting room at the Public Works Ministry’s building on Wednesday.

Bung who is also the Works Minister, also proposed to the relevant parties to implement other initiatives to promote vaccine registrations since the MySejahtera method is not effective.

He said that walk-in approach should be considered to Sabahans who have yet to receive their vaccination appointment since some may not have access to the internet.

In addition to the MySejahtera approach, Bung also suggested walk-in registrations and drive-by registrations to be open to the public so that Sabah can achieve her herd immunity at the targeted time.

Two Sabah Umno leaders have also expressed disappointment over the slow vaccination rate in the state.

Sabah Umno secretary Jafry Ariffin said the distribution of vaccines into Sabah must be fair and balanced especially with the state having 2,758,400 people eligible for immunisation.

Jafry, who is also state Tourism, Culture and Environment Minister, accused the federal government of being unfair in the distribution, which he said also reflected its poor management of the vaccination programme.

He called for Putrajaya to expedite the supply of vaccines to Sabah as well as to be transparent on the issue considering that many residents in the state have yet to receive their vaccination appointments.

Former chief minister Datuk Salleh Said Keruak has also urged Putrajaya to focus on vaccinating Sabahans so that they can achieve herd immunity by October.

Salleh, who is also the former communications and multimedia minister, said Sabah had been left behind for too long with the lowest vaccination rate in Malaysia.