Thursday, August 5
You are at:Home»News»Sarawak»CM: Thankfully S’wak has powers to make decisions apt to situation in the state 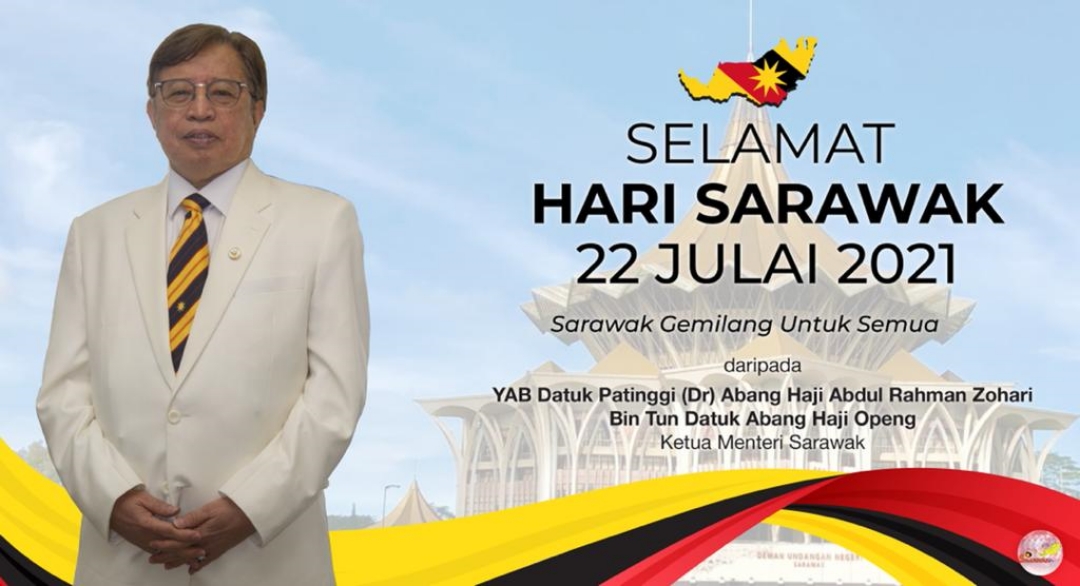 Sarawak has the powers under the State Constitution to make decisions that are tailored to the situation in the state, which are more practical and effective, said Chief Minister Datuk Patinggi Abang Johari Tun Openg in his Sarawak Day message.

KUCHING (July 21): In efforts to address the Covid-19 pandemic that is plaguing the state at this time, it is much appreciated that Sarawak has the powers under the State Constitution to make decisions that are tailored to the situation in the state, which are more practical and effective, said Chief Minister Datuk Patinggi Abang Johari Tun Openg.

He said Sarawak is a territory almost as large as the land area of the Peninsula and sometimes, with resource and infrastructure constraints, it is quite difficult for the state authorities to implement decisions that have been made at the federal level.

“We respect the federal government and decisions made at the federal level but not every decision made in Putrajaya is suitable or practical for implementation in Sarawak.

“The ability to make decisions for the interest of Sarawak should reflect the identity of Sarawakians in determining their own future so that the state can be on par with other states or countries that are already ahead,” he said in his Sarawak Day message.

A clear example, he pointed out, would be the modification to the vaccination process that allows people in rural areas to be vaccinated first and then registered in the MySejahtera application because it was agreed that it is difficult for folks in longhouses and villages to register and access MySejahtera.

“The space that allows us to make decisions in accordance with the needs of Sarawak has also allowed us to take steps that have accelerated the process of vaccination in Sarawak.

“The SDMC (State Disaster Management Committee), with the support and cooperation of various parties especially industries, has set up vaccination centres in workplaces as well as the establishment of mobile teams to reach out to those who are unable to come to the vaccination centres. The military also helps in rural areas,” he said.

Thankfully, the chief minister added, with all these measures, Sarawak is one of the states fastest in the vaccination programme, with more than 60 per cent of the 2.2 million adults having received the first dose.

“Measures have been imposed by the SDMC to curb the spread of Covid-19, including measures to speed up the vaccination programme, which appear to have succeeded in lowering the number of daily cases of infection in recent days.

“This proves that Sarawak has the ability to manage whatever problems it faces,” he said.

Noting that this year, as with last year, Sarawak Day could not be celebrated in a large scale due to the pandemic, Abang Johari believes the constraints faced do not dampen Sarawakians’ spirit in commemorating a very important event in the history of Sarawak.

He said as Sarawak heads towards achieving developed state status by 2030, the state government has strategically planned economic development by focusing on infrastructure development, including Internet infrastructure.

“I am very confident that with our far-sighted policy, we can bring the state’s economic development to a higher level and increase the people’s income with value-added products.

“The festive celebration this time became more meaningful with the launch of the post-Covid-19 plan for Sarawak, which aims to chart the direction of our economy until 2030 by taking into account the impact of Covid-19,” he pointed out.

Abang Johari said despite the country facing an uncertain political situation that has become more acute during the pandemic period, Sarawak is relatively stable and he thanked all Sarawakians for being involved in politics prudently and keeping Sarawak from becoming a mess.

He said he is deeply touched by the cooperation and concern of the people of Sarawak who have come forward to help those who do not have the ability to obtain food during the recent Movement Control Order (MCO) period.

“The state government has implemented the food aid programme through BKSS 6.0 and also the federal government through Pemulih but we cannot rule out the possibility that some are left behind or do not get enough supply to meet their needs during the MCO period.

“Companies, supermarkets, religious organisations, societies, political parties and individuals have come forward to distribute free food items to those in need. On behalf of the Sarawak government, I would like to express my appreciation and thanks to all parties who are willing to help without expecting anything in return, including movements such as the White Flag,” he said.

He added that he is also deeply touched by the commitment of the frontliners who have worked tirelessly to combat the Covid-19 pandemic for more than a year and who are all heroes whose sacrifices are invaluable.

“In closing, in conjunction with the Sarawak Day celebration this year, I call on all Sarawakians to continue to work together and work hard regardless of their roles to raise Sarawak up as an excellent state for all of us and our future generations,” he said.