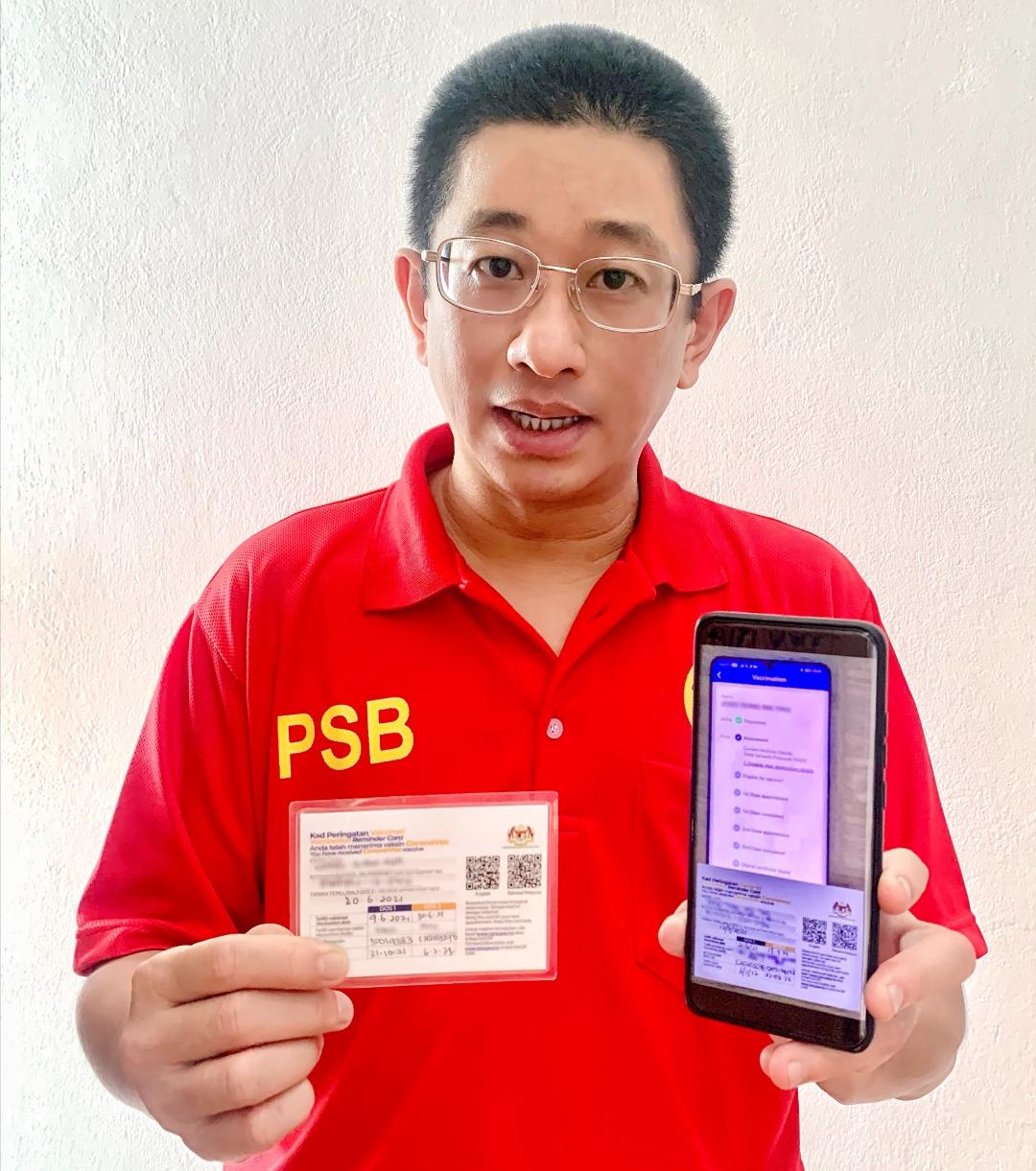 Wong shows the status of a recipient on his vaccination card which was not updated in his MySejahtera mobile app.

SIBU (July 21): The relevant authorities have been told to speed up the issuance of Covid-19 digital vaccination certificate in the MySejahtera mobile application for those who have already completed two doses of the vaccine.

Parti Sarawak Bersatu (PSB) Sibu Task Force member Wong Siu Eing said the digital certificate is very important as it reflects the status of a person especially when the government is going to announce the standard operating procedure (SOP) for those who have completed the two doses.

“It is important that the relevant authorities update the digital vaccination certificate so that those who had already received two doses can enjoy the benefits once the relaxed SOP is announced,” he added.

Wong said he was on a visit to the Covid-19 vaccination centre (PPV) at West Bank here recently when he received feedback about this problem.

Though the status of those who had gone for vaccination was recorded in the Covid-19 vaccination card, he pointed out many of them were not issued with a digital vaccination certificate in their MySejahtera app even after receiving their second dose.

“When the recipients asked the relevant authorities when their MySejahtera would be updated, they were told that all the information had been sent to Peninsular Malaysia and to wait for their details to be updated,” he said.

Wong, who is also chairman of Sarawak China Graduates Alumni Association, said with the government spending millions of taxpayers’ money to set up the MySejahtera mobile application, they should ensure that the system works efficiently and any shortcomings should be improved in the shortest of time.

He pointed out that the vaccination status of a recipient had become an important condition for people to travel, dine-in or work.

Lately, Sarawak Disaster Management Committee (SDMC) had come up with new SOP that food operators and their employees must have received at least one dose of the vaccine.

Some food outlets were also reported to have accepted for dine-in only those who had received at least one dose or are classified as low risk in the MySejahtera profile.

Wong said the Ministry of Health had also announced a few days ago that it would establish new guidelines for those who had received two doses of the vaccine and relax restrictions in certain areas.

“This means that to carry on with their activities, the people must be able to show the vaccination certificate in the mobile phone to prove that they had received the two doses.”

Those who failed to show the digital vaccination certificate might have their benefits curtailed or even denied, he added.

But there is the fear that the cards could be easily misplaced.

In the USA, he said, many irresponsible people had forged the vaccination cards as the ticket for them to travel overseas.

Commenting further, Wong said another pestering question was vaccination for illegal foreign workers, foreigners without documents and those without identity cards.

“The government is yet to announce the plan for this group of people. Remember, if we are to achieve herd immunity, these groups of people should not be ignored,” he stressed.