Tuesday, July 27
You are at:Home»News»Sabah»CM: Sabah not buying vaccines 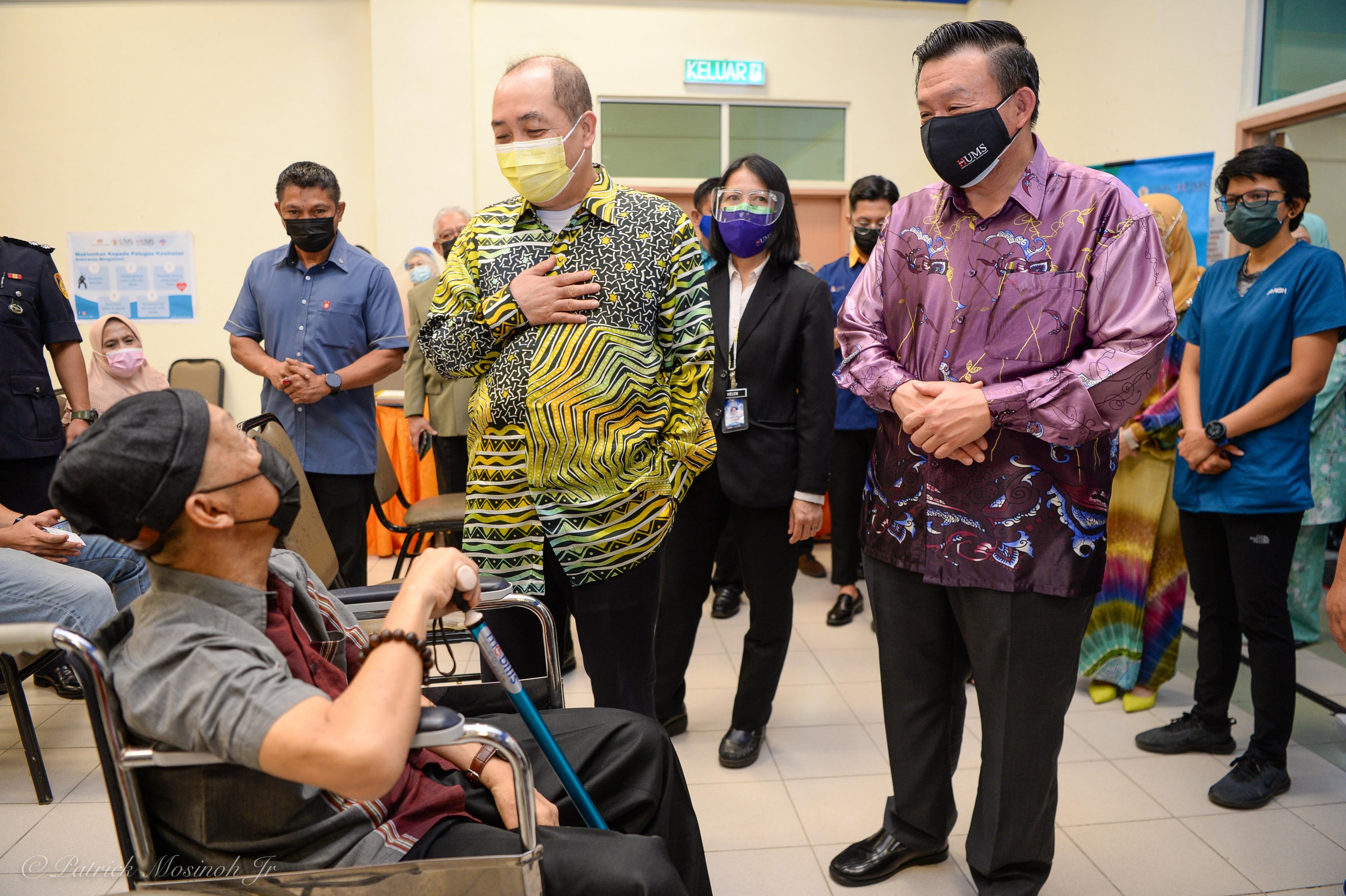 Hajiji speaking to a vaccine recipient at the vaccination centre in UMS.

KOTA KINABALU: The State Government Sabah has no plans to buy its own vaccines and will be relying on the Federal Government for the supply.

Chief Minister Datuk Seri Hajiji Noor said Sabah should be getting more vaccines from the Federal Government in order to achieve herd immunity and achieve the target of inoculating 50 to 60% of population by this October.

Speaking to reporters after visiting the vaccination centre (PPV) at Universiti Malaysia Sabah (UMS) on Thursday, Hajiji revealed that the 2.2 million doses are not sufficient for Sabah as the state has a population of 2.7 million.

“We hope that the Federal Government would supply more vaccines to Sabah as Sabah is one of the states with the lowest vaccination rate,” he said.

He disclosed that the Federal Government had started to supply more vaccines this week and it will be continued in the following weeks.

The Sulaman assemblyman is also hoping that the Federal Government will be able to expedite the delivery of vaccines to Sabah in light of the recent delay.

He explained that there was a slight delay in the delivery by the suppliers. It is understood that the Ministry of Health (MoH) had already rescheduled the delivery.

“Therefore, I hope that the Federal Government and MoH will be able to deliver the required vaccines so that the state would achieve 50 to 60 per cent vaccination target by October,” he said.

Pharmanagia has made available 14 million of Sinovac vaccine doses for sale to interested states and companies.

Hajiji had also expressed his gratitude towards UMS and its Vice Chancellor Professor Datuk Dr Taufiq Yap Yun Hin for the latter’s efforts in providing the PPV to the UMS students and public at large.

“I was made to understand that UMS will be increasing its vaccine distribution to 3,000 doses daily starting next week as compared to the current 1,000 doses daily,” he said, adding that the vaccination process is being managed by UMS alone.

Meanwhile, newly-appointed Sabah Health director Dr Rose Nani Mudin said Sabah reached 30,000 jabs a day on July 21 and is expected to increase to 40,000 daily by this week, as more vaccines come in and capacities are increased at PPVs.

“We are now re-strategising on the flow at vaccine centres, and how to distribute vaccines properly to places that need more such as high density areas.

“So at this moment, we continuously receive vaccine supply, despite a delay of maybe one or two days, but we still get them.

“What we need to do now is convince those who refused to get registered for vaccination,” she said.

On suggestions of allowing walk-in registrations and vaccinations, the director said they were already reaching out to rural villagers through the mobile outreach programme.

“We also need to remember that there are those who registered via MySejahtera, who have yet to receive an appointment. As such, before we can consider walk-ins, we need to clear this list first.

“But at the same time, we also give priority to senior citizens who did walk in and do not know how to use the MySejahtera app,” she added.

State Local Government and Housing Minister Datuk Seri Masidi Manjun, who is the Sabah Covid-19 spokesperson, had said the state will receive more than one million vaccine doses in July.

Rose also said the department will continue to work with UMS to achieve the vaccination rate.

She said that the PPV in UMS has the capability to carry out more vaccinations in a day but admitted that some minor changes should be done to smoothen to process, similar to what she has observed in the other PPVs in Sabah.

“As it stands, only 13 per cent of the Sabah population have been vaccinated. Thus, we will be making minor changes in the PPVs so that the process would be more efficient and the number of daily doses could be increased,” she said.

In this regard, the department has decided to set up a team comprising of the heads of each of the PPVs in Sabah.

For instance, Rose said that the vaccination registration process should be shortened so that the vaccine recipients would not have to go through so many stages.

Rose said that adopting a QR Code system for registration will expedite the entire process as compared to manual registration.