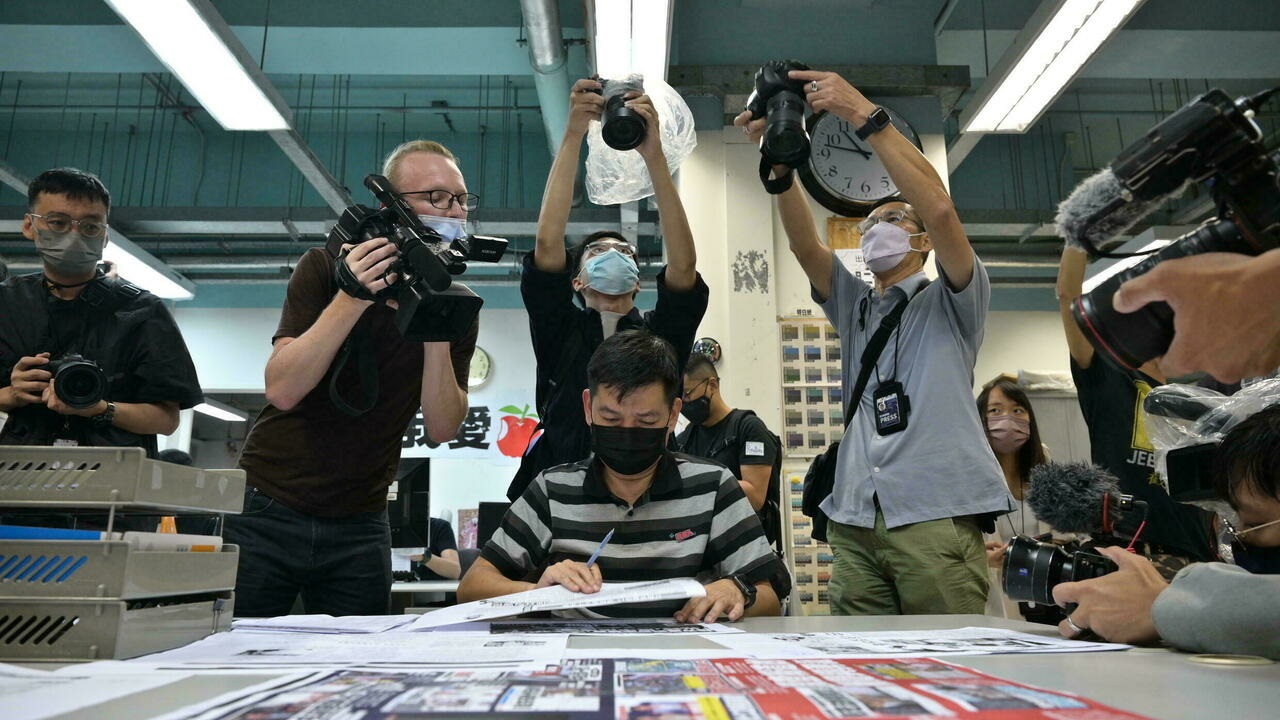 Lam Man-Chung, then executive editor in chief of Hong Kong’s pro-democracy ‘Apple Daily’ newspaper on the day before it printed its final edition. – AFP file photo

In a late Wednesday statement, police said they officially laid charges against four persons aged 51 to 57, for the offence of “conspiracy to collude with foreign forces”.

They will be brought to West Kowloon Magistrates’ Court for a hearing on Thursday morning.

Lam is the eighth employee of Apple Daily arrested within a month under a sweeping national security law that Beijing imposed on Hong Kong last year after huge and often violent democracy protests.

Lam’s girlfriend told local media Citizen News that the arrest was made at home at dawn. Police seized his computers and mobile phones for investigation.

“Nowadays working in journalism, one wouldn’t be unprepared psychologically (for this),” she told Citizen News.

Chan, 51, was among the five executives who were arrested in mid-June after hundreds of security officers raided the paper’s newsroom.

Yeung, 55, who wrote under the pen name Li Ping for the paper’s editorials — which express the editorial board’s official views — was arrested days after the police raid.

Apple Daily, an unapologetic backer of the democracy movement, put out its last edition on June 23 after the arrest of its top leadership and an asset freeze under the security law.

Lam, 51, was the editor who oversaw that final edition, ending the paper’s 26-year run.

Fung, 57, also a former chief opinion writer for the Apple Daily’s English website, was arrested at the city’s airport as he tried to leave the city just a few days after the paper was shut.

Authorities said Apple Daily’s reporting and editorials backed calls for international sanctions against China, a political stance that has been criminalised by the new security law.

The tabloid’s owner Jimmy Lai, 73, is currently in prison and has been charged with collusion alongside two other executives who have been denied bail.

They face up to life in prison if convicted.

Among the others arrested, but currently on bail, are the paper’s chief operating officer and another executive chief editor.

The paper’s sudden demise was a stark warning to all media outlets on the reach of the new national security law in a city that once billed itself as a beacon of press freedom in the region.

The Hong Kong Journalists Association expressed indignation and shock over the arrests.

The group last week published its annual report saying the city’s media freedoms were “in tatters” as China remoulds the once outspoken business hub in its own authoritarian image. – AFP