Tuesday, May 17
You are at:Home»News»Sarawak»Covid-19 in Sarawak: From first detection to vaccines

Ensuring those eligible undergo vaccination remains the most crucial measure – it falls under collective responsibility of all, says medical expert 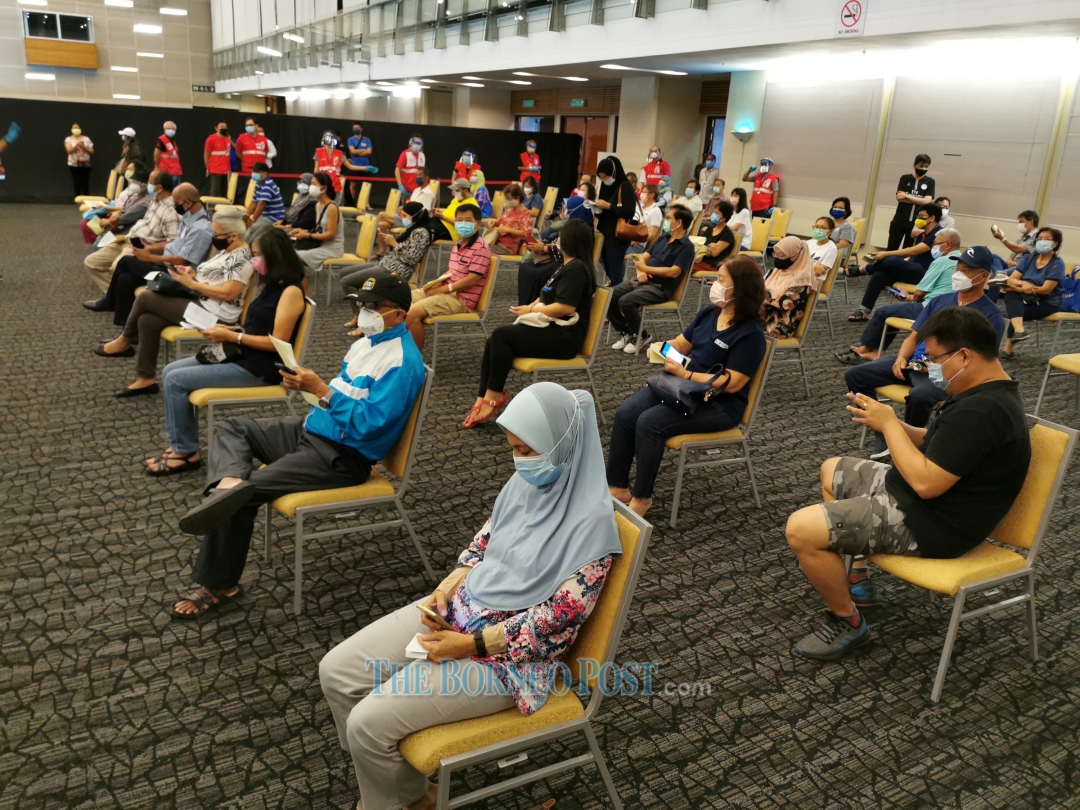 IT has been more than a year since Covid-19 hit Sarawak.

On March 13 last year, the state recorded three Covid-19 cases, two of which were linked to the Sri Petaling Tabligh Cluster, which had then grown to become one of the largest Covid-19 clusters in the country.

Since then, positive cases have continued to persist with the state’s highest number of daily new infections reported on April 16 this year, at 960 cases.

As at yesterday, Sarawak’s cumulative number of Covid-19 cases reached 76,728, with the death toll standing at 462. Its daily cases numbered at 485, with Kuching reporting more than half of the cases – at 274.

The deluge of Covid-19 cases hitting the state has also resulted in the emergence of numerous clusters, with the latest figure of active clusters now at 84, including two that were just declared yesterday: the Kampung Git Cluster in Kuching, and Jambatan Lemua Cluster in Beluru.

Named after Pasai Siong, this cluster was declared closed by the State Disaster Management Committee (SDMC) on April 13 – almost four months since it was confirmed on Jan 9.

The cluster’s index case had led to a total of 2,693 infections, infected 58 longhouses and caused 29 deaths. 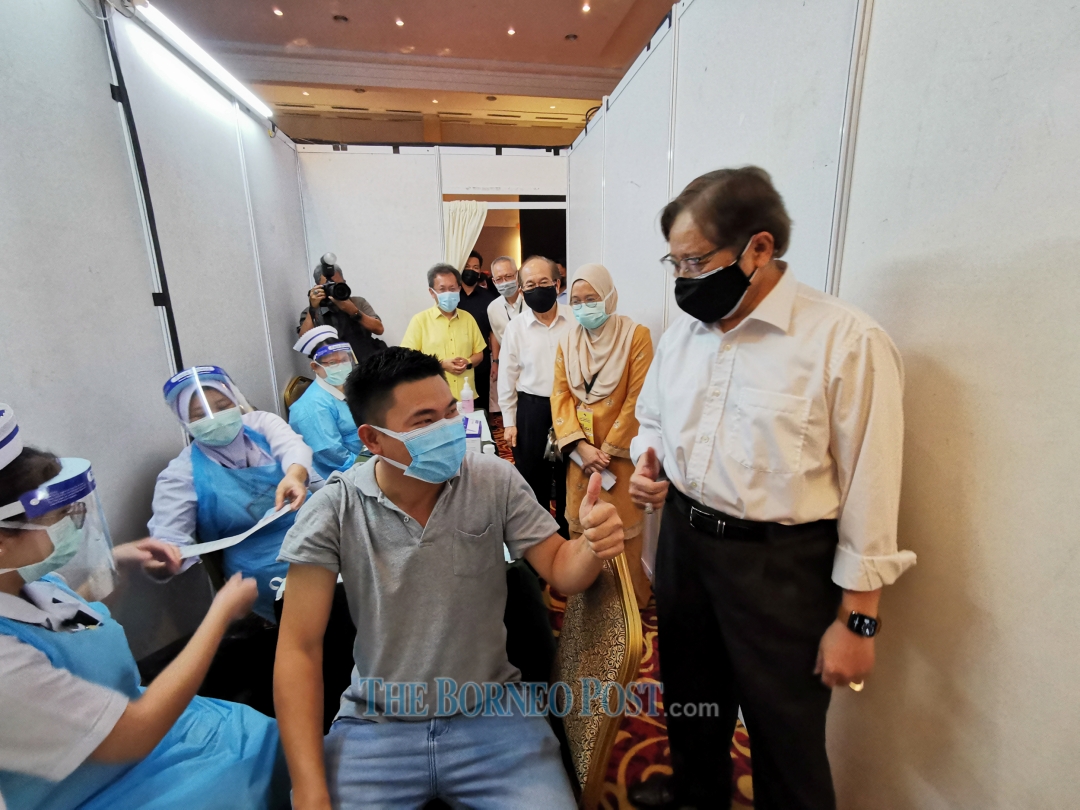 Abang Johari chatting with a vaccinee during his visit to the vaccination centre run by Jalan Masjid Health Clinic at Majma Hall in Kuching. — Photo by Roystein Emmor

When Sarawak received its first batch of Covid-19 vaccines back in February this year, it marked a major step towards the state’s fight against this deadly virus.

Chief Minister Datuk Patinggi Abang Johari Tun Openg, who was the first to be inoculated at Petra Jaya Health Clinic in Kuching, had announced at a press conference on July 1 this year that the state was moving on the right track towards achieving 80 per cent herd immunity by the end of August.

He said Sarawak had so far vaccinated more than 50 per cent of eligible recipients of the vaccines, namely of Pfizer-BioNtech, Sinovac and AstraZeneca brands.

According to the website of the Special Committee of Ensuring Access to Covid-19 Vaccine Supply (JKJAV), a total of 1,788,664 people in Sarawak had registered for the National Covid-19 Immunisation Programme (PICK) as at July 28, with 1,685,974 having been given the first dose of the vaccine.

As Sarawak continued forward in its fight against Covid-19, Malaysia Medical Association (MMA) president Prof Dato Dr Subramaniam Muniandy said the most crucial measure right now would be to ensure that all Malaysians would undergo vaccination. 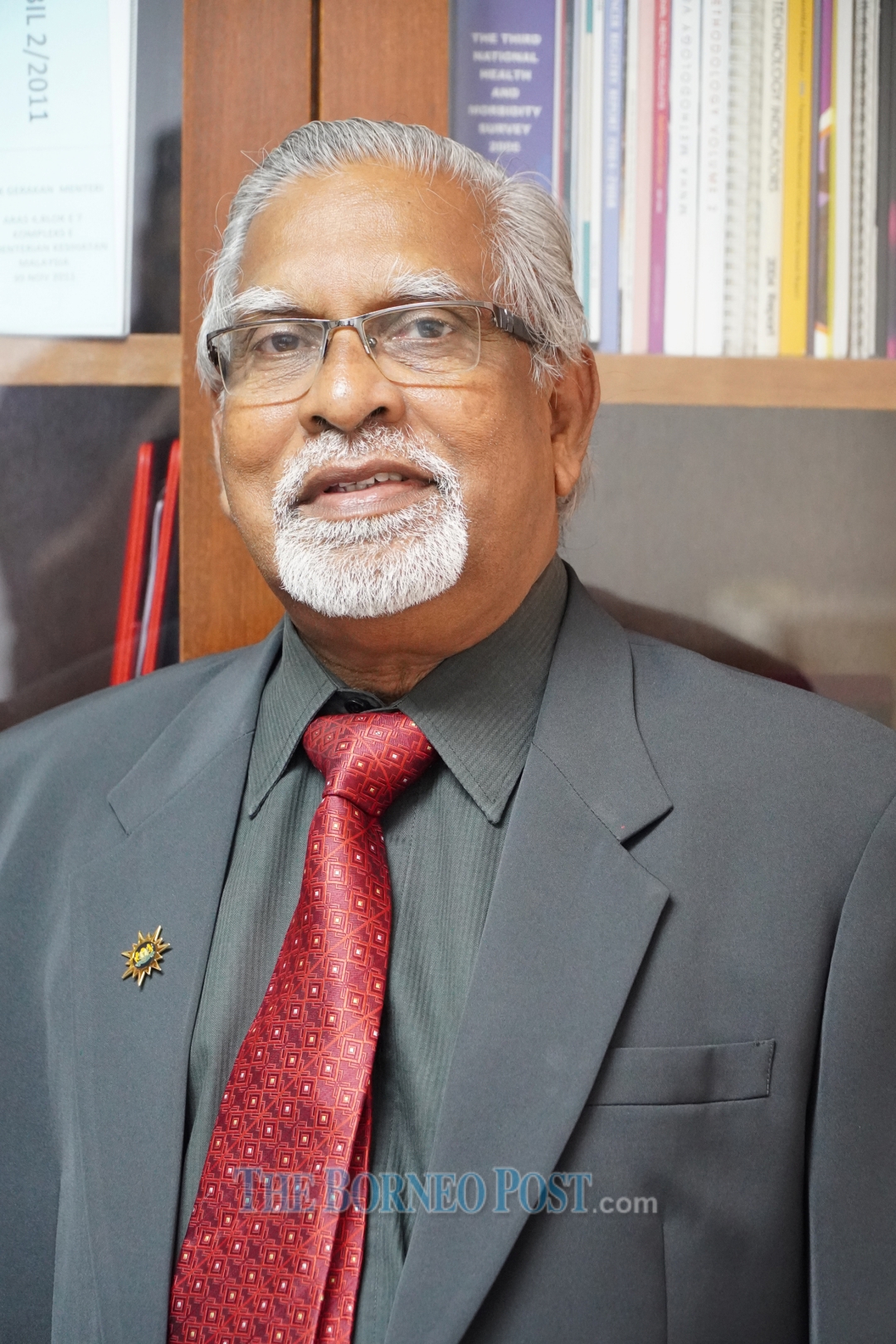 “The most important of all is for the unvaccinated to get vaccinated if they are eligible – and to do so as soon as possible.

“The fight against Covid-19 is a collective responsibility. All must do their part; only then can we see a drop in infections, hospitalisation and deaths, as well as the reopening of our country’s economic sectors,” he told thesundaypost.

According to him, public hospitals across the country are still overwhelmed at the moment.

“We need to see a significant reduction in admissions and the only way is through ramped-up vaccinations and strict adherence to all standard operating procedures (SOP),” he said.

Dr Subramaniam pointed out that once the admissions at hospitals’ intensive care units (ICUs) had been significantly reduced, then the other sectors could begin to reopen in stages.

“By then, hopefully, at least 70 to 80 per cent of Malaysia’s population would have been vaccinated,” he said.

Dr Subramaniam said the government should allow non-essential sectors with a fully vaccinated workforce to reopen in stages and subject to strict SOP.

“This can encourage others to get the vaccine jab. Comprehensive, updated SOP should be provided to all businesses, schools, universities, retails and so on ahead of the opening up of these sectors,” he said.

Still much to be improved

Meanwhile, Malaysian Armed Forces (ATM) Combat Medic Vaccination Team medical officer Capt Dr Zane Azraai Mohd Suhaimi said new strategies should be taken as the measures implemented so far had proven to be insufficient in the fight against the spread of Covid-19. 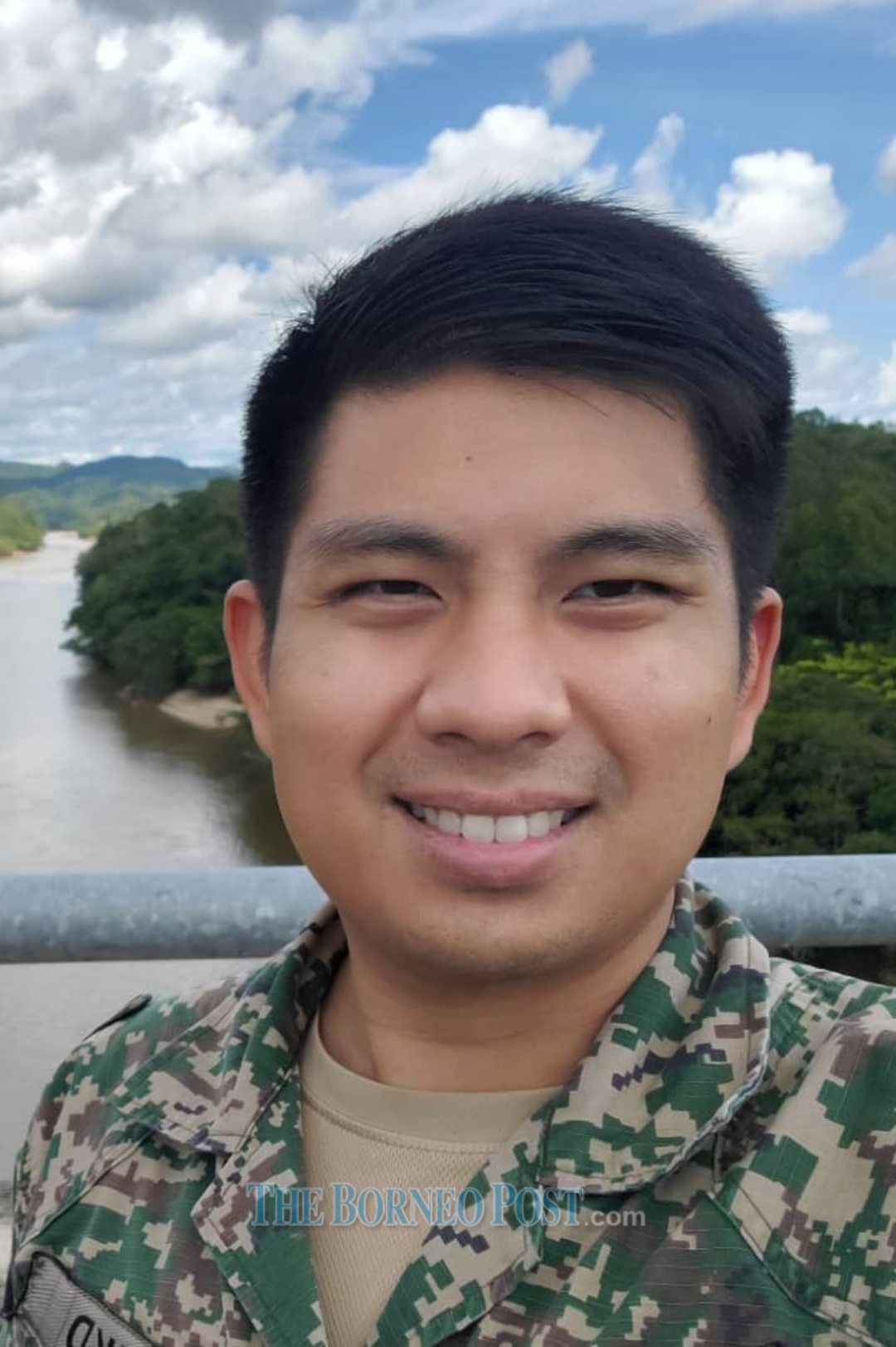 “In my opinion, several measures should be implemented such as speeding up the vaccination progress.

“We need to reach 80 per cent of the population to achieve herd immunity, but certain areas such as the interiors of Sabah, for instance, have only had 30 per cent registered for the vaccination programme.

“To depend solely on the MySejahtera app is not feasible, as many of those living in the interiors have no Internet coverage, with some of them not being IT-literate,” he said.

Dr Zane also said the vaccination programme should include foreign workers as based on statistics of daily Covid-19 cases, around 20 to 25 per cent of new cases involved non-citizens.

“Many countries including Singapore, the United States and a majority of European countries have fairly been successful in containing the spread of the virus as their vaccination strategies include vaccinating non-citizens who are living and working in their countries.

“The public may demand that priority be given to citizens, but if we sincerely want to contain the spread, vaccination should also be extended to non-citizens.

“Perhaps, the private healthcare sectors could lend a hand in implementing vaccination to non-citizens by charging them a reasonable cost for the jab – in the name of humanitarian cause,” he suggested. 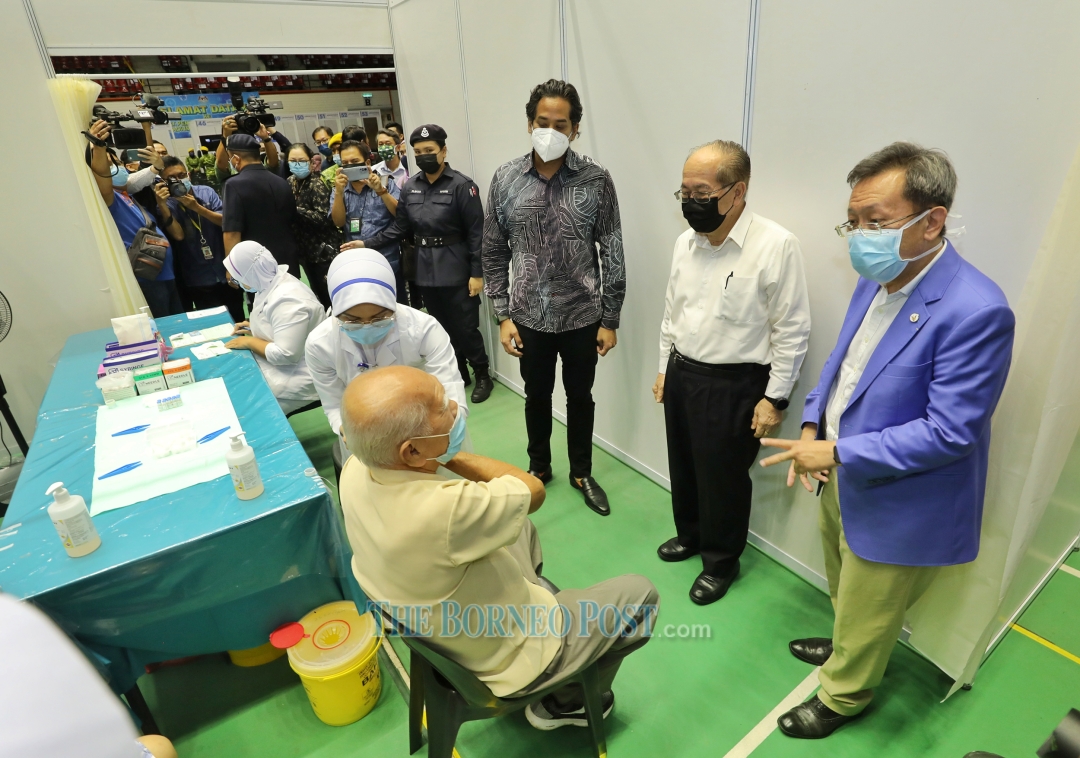 (From right) Minister for Local Government and Housing Sarawak Dato Sri Dr Sim Kui Hian, Deputy Chief Minister Datuk Amar Douglas Uggah Embas and National Covid-19 Immunisation Programme Coordinating Minister Khairy Jamaluddin having a chat with a senior citizen who is about to receive his vaccine jab at the vaccination centre in Stadium Perpaduan in Kuching. — Photo by Chimon Upon

Dr Zane also reminded all that although more people were getting vaccinated, this did not mean that they would be safe from Covid-19.

“Vaccination alone would not guarantee that the spread of the virus could be controlled, as those who have been vaccinated could still be infected even though their symptoms would usually be milder those who are not vaccinated.

“They also might not be protected from certain Covid-19 variants brought in earlier by import cases, such as the Delta variant or even the Lambda and Omega variants,” he said.

Dr Zane urged those who had been fully vaccinated to not be complacent, as they must continue to wear masks and practise Covid-19 SOP to protect themselves.

Adding on, Dr Subramaniam called upon all Malaysians not to take the Covid-19 pandemic lightly.

“Over and over again, whenever the restrictions were relaxed, people would let their guard down and this had led to months of being under the Movement Control Order (MCO).

“It didn’t help that the government had made a few bad calls like refusing to conduct mass community screenings much earlier as well as allowing the Sabah state election to proceed without proper control,” he added.