Saturday, May 28
You are at:Home»Features»Grand house on Tanjong Lobang cliff 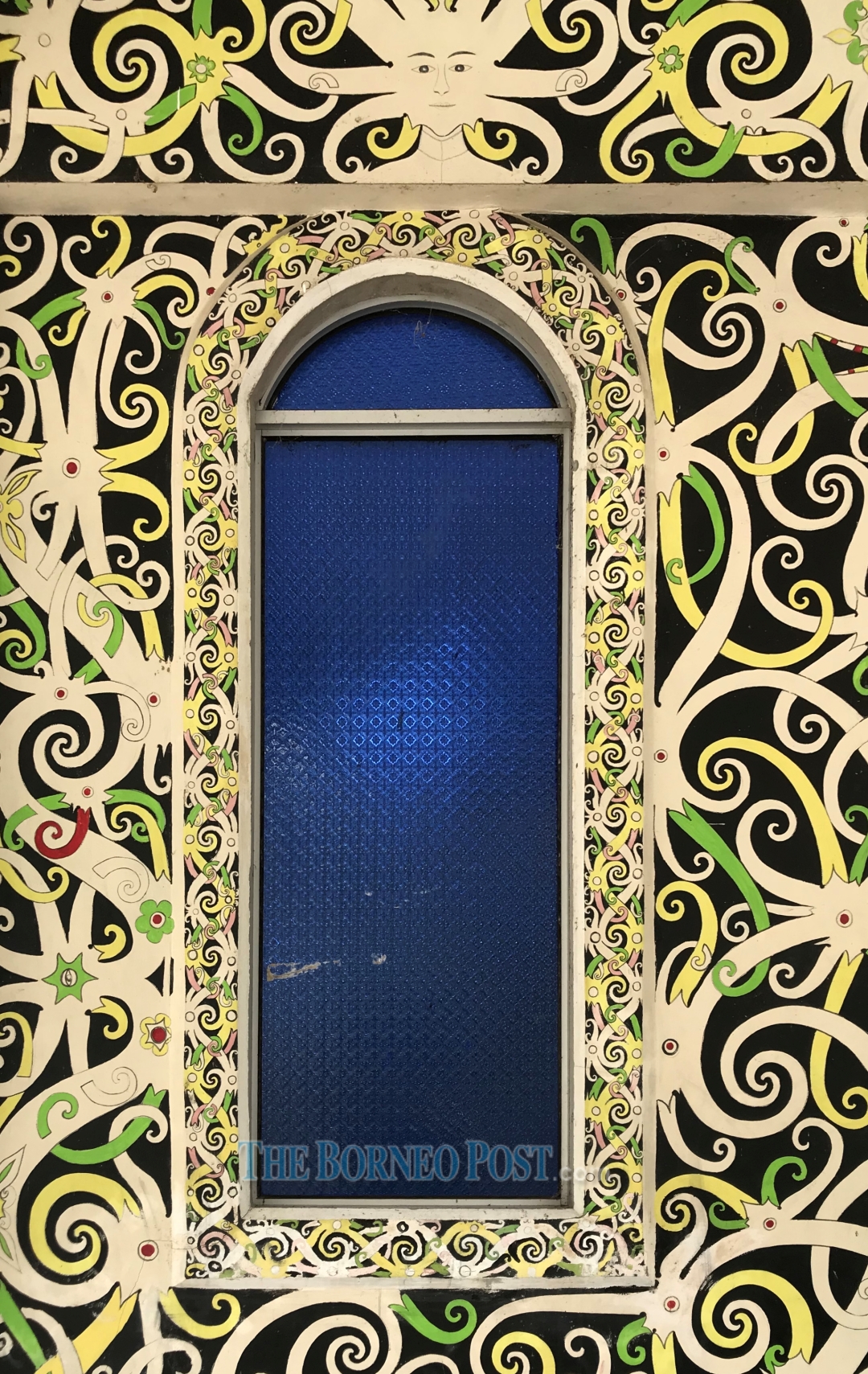 The chapel’s façade, with the blue window amidst vibrant Kenyah motifs.

THE stately Bishop’s House at Tanjong Lobang in Miri was built for the first Roman Catholic Bishop of Miri, Bishop Anthony Galvin, who had lived there for many years.

The construction, which included a beautiful chapel built adjacent to the mansion, reached completion around 1962/63 – it was probably designed by Bishop Galvin himself.

In the 1950s, Tanjong Lobang was still a wild promontory, with a lighthouse at the tip of the cliff serving as an indication of development.

A few ‘kampong’ (village) houses dotted the craggy cliff sides, and there was a small Muslim cemetery at the curve of the hilly mud-track down to Brighton Road.

In 1957, the Tanjong Lobang School was established by the Sarawak Education Department, with funds coming in from New Zealand.

It was meant for the boys and girls from poor rural households across Miri Division, which included Bintulu back then.

The road to the school was a hardened mud-track, said one of the earliest students, Chris Sawan.

“Below the hill were kampong houses and fishermen’s huts… I remember.

“During the weekends, the beach would be full of fishermen and women; the students would also come down for weekend fishing.

“There was only one small bus that provided service. Apart from that, we relied on our own legs to go to town.

“I remember the Bishop’s House, which was like a palace! Only a few of the senior boys had been invited to the main house, while the rest of us would go for our weekly prayers in the chapel, which was just outside the school gate.

“The chapel itself was quite impressive as well – the walls had beautiful Kenyah motifs and there were exquisite blue glass panels in front of the building.

“The Bishop was a friendly man. I personally did not know that he was actually holding a very high position,” reminisced Chris. 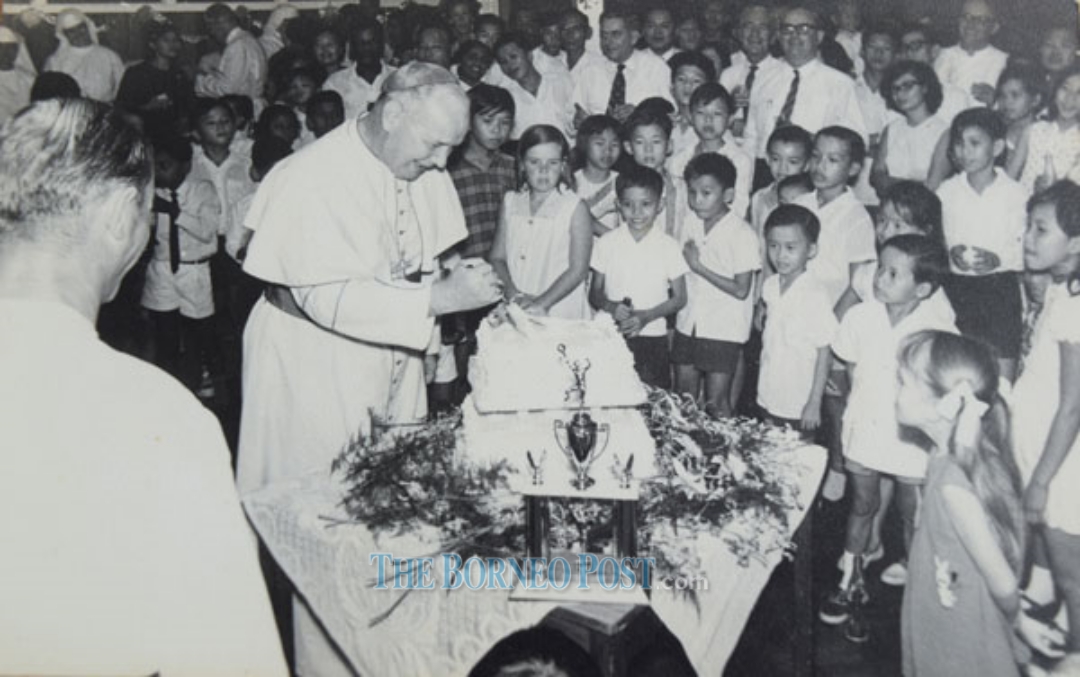 Archive photo shows Bishop Galvin with his congregation in Miri.

Bishop Galvin was born in 1919 in Ormesby, England and was ordained as priest in the St Joseph’s Missionary Society of Mill Hill at the age of 25.

He was first appointed chaplain to Batu Lintang Teachers Training College in Kuching, before becoming its principal from 1953 to 1956.

In 1961, he was appointed to head the newly-erected Vicariate Apostolic of Miri by Pope John XXIII in Rome. 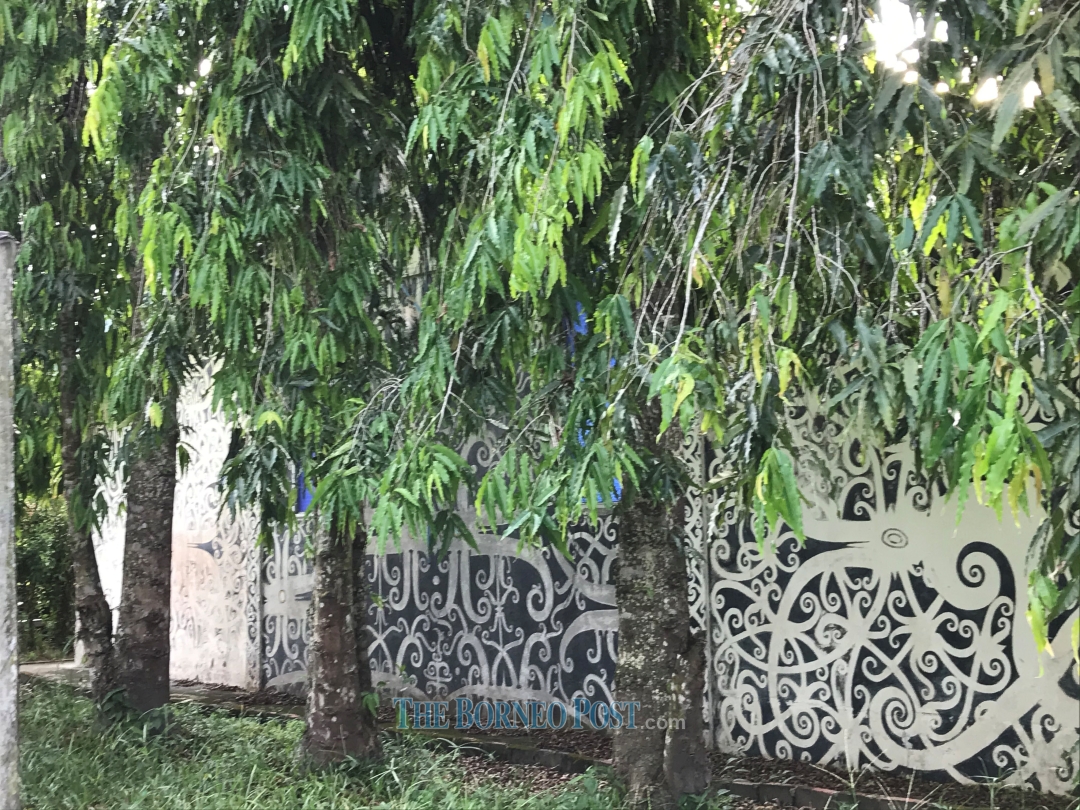 Kenyah artwork extends to the other walls of the chapel.

As Bishop Galvin was an anthropologist at heart, and he was deeply interested in Kenyah arts.

According to Peter Kallang, the Bishop commissioned two Kenyah artists from Baram for the mural works on the chapel – most likely in the late 1960s.

It is said that Jalong Libang and Lawai Laoh spent a year to complete this project.

Peter showed the writer a photo capturing his late father, Petrus Kallang Jau, together with Jalong during a naming ceremony in Long Ikang. 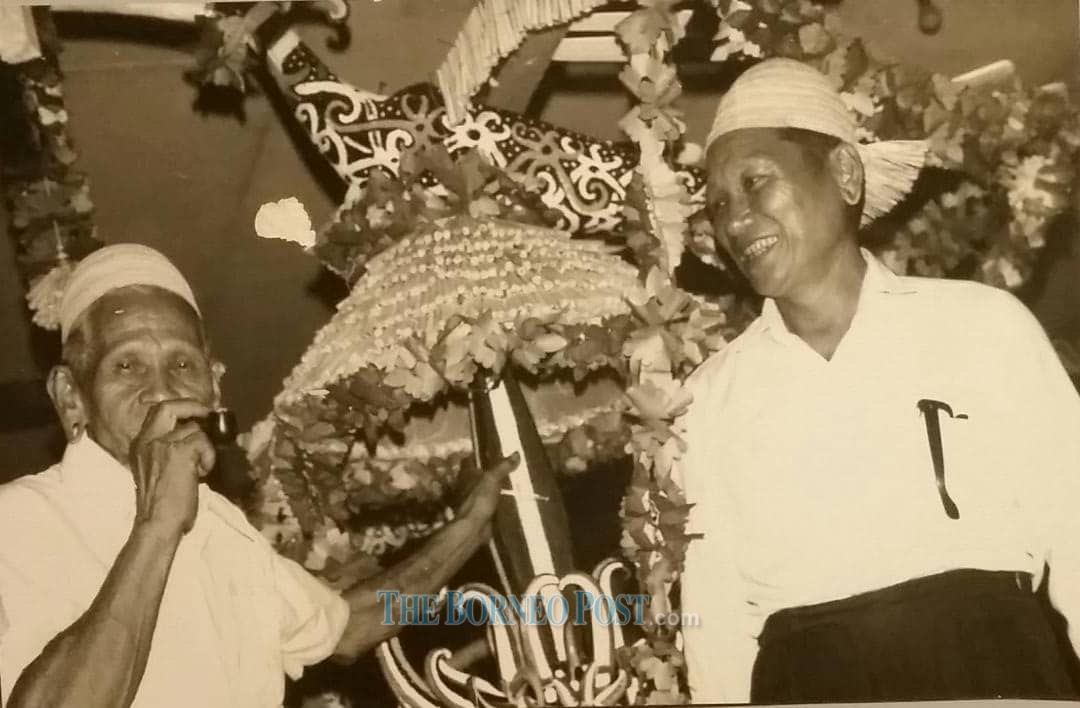 “Jalong was a Kenyah Lepo Tau, from Long Nawang, Apau Kayan in Kalimantan, Indonesia. He was also my grand-uncle, from my mother’s side.”

Lawai – also known as Lawai Sigau – was from Long Moh. He had passed on, survived by a granddaughter who is now living in Singapore.

The design on the wall of the chapel before the congregation features a male figure representing Jesus Christ, and there is also a crucifix.

According to Peter, it is normal for many Roman Catholic churches to have murals depicting crucifixes, but the one at Bishop’s House Chapel in Tanjong Lobang stands as the only one in the world that features Jesus Christ amidst Kenyah artwork.

On the wall opposite the chapel’s altar is another Kenyah mural featuring a woman, obviously representing Mary, the Mother of Jesus.

“This is, again, a unique feature in the world. However, the usage of the colour green is ‘not normal’ when it comes to Kenyah motifs, which usually consist of white, red, yellow and black.

“The central feature of a Kenyah mural is usually a male figure, or just a face.

“So for the chapel to have a central female figure in the mural design is truly unique and remarkable, and this should be preserved for posterity,” said Peter. 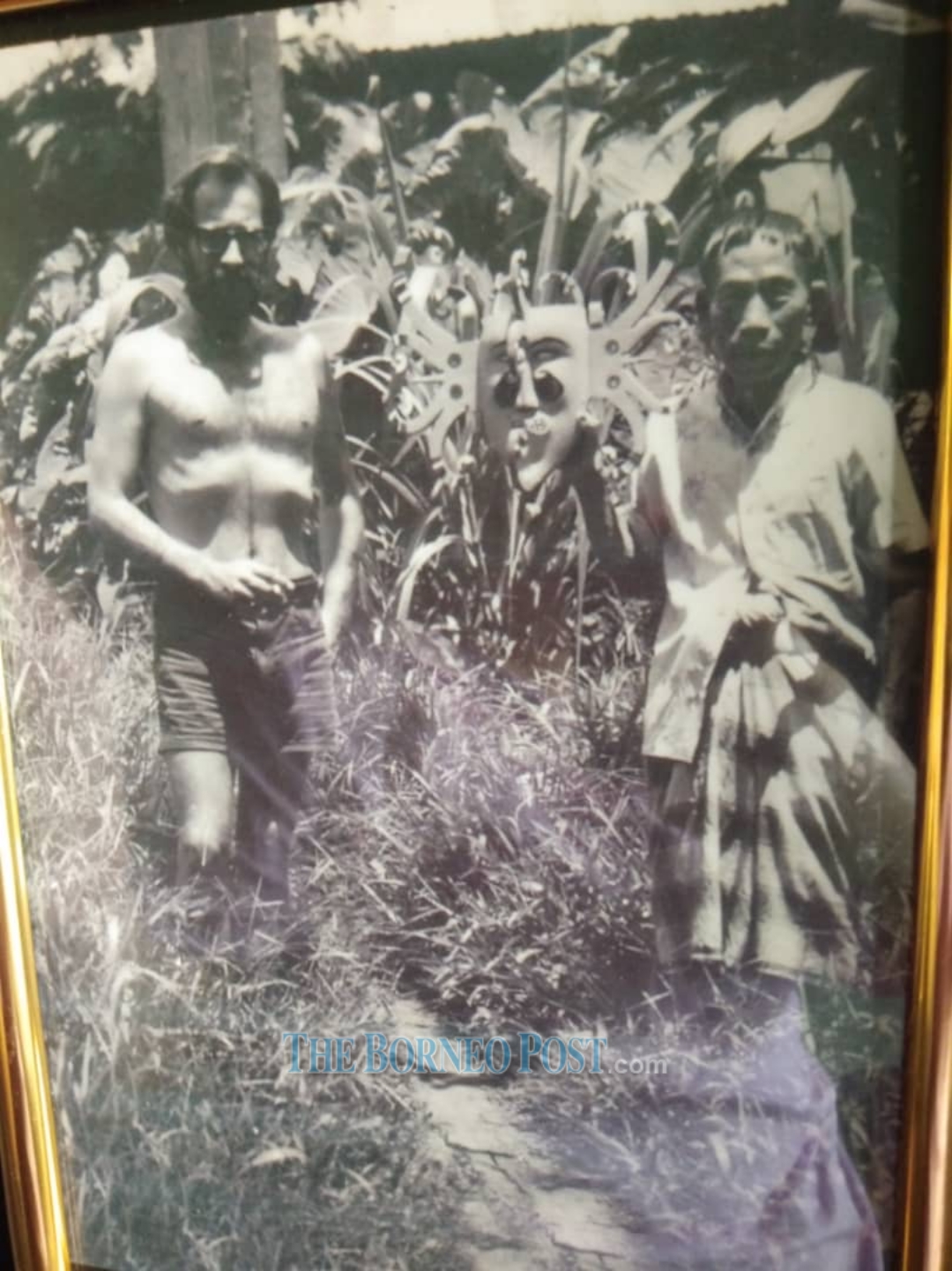 According to John Barah, the first rector was Archbishop Emeritus Peter Chung.

Fr Chung was born in China, but because of the persecution of Christians in Mainland China back in those days, he received training in Taiwan.

Bishop Galvin brought Fr Chung in, together with two other newly-ordained priests from Taiwan, to serve in the vicariate. 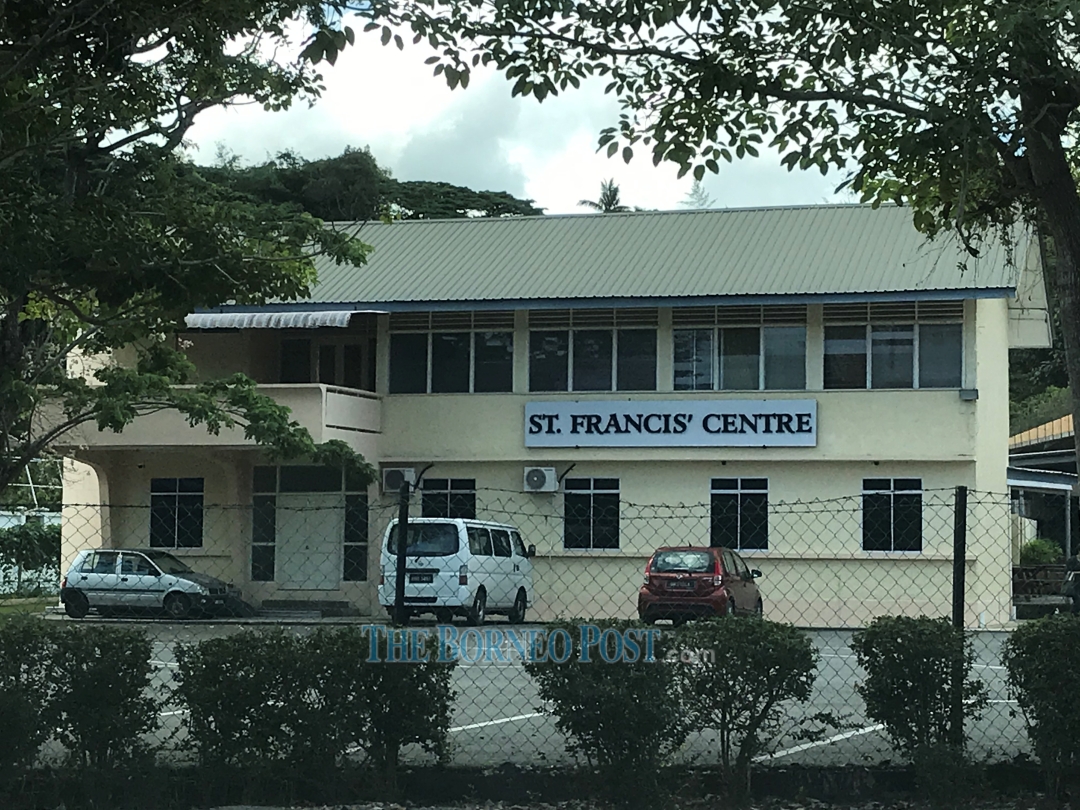 The St Francis Seminary in Miri, where Monsignor Francis Kulleh was among its first batch of 18 schoolboys back in the late 1960s.

Many boys from the Baram were selected to join the seminary – Monsignor Francis Kulleh was among the first batch of 18.

The Monsignor, who is in his 70s today, was a classmate to many prominent Orang Ulu figures such as Rev-Fr Peter Mering who was among the first Kenyah priests in Malaysia, famous sape artiste Michael Ngau Jau, and former Sarawak State Sports Council (MSNS) director Francis Nyurang Ding. 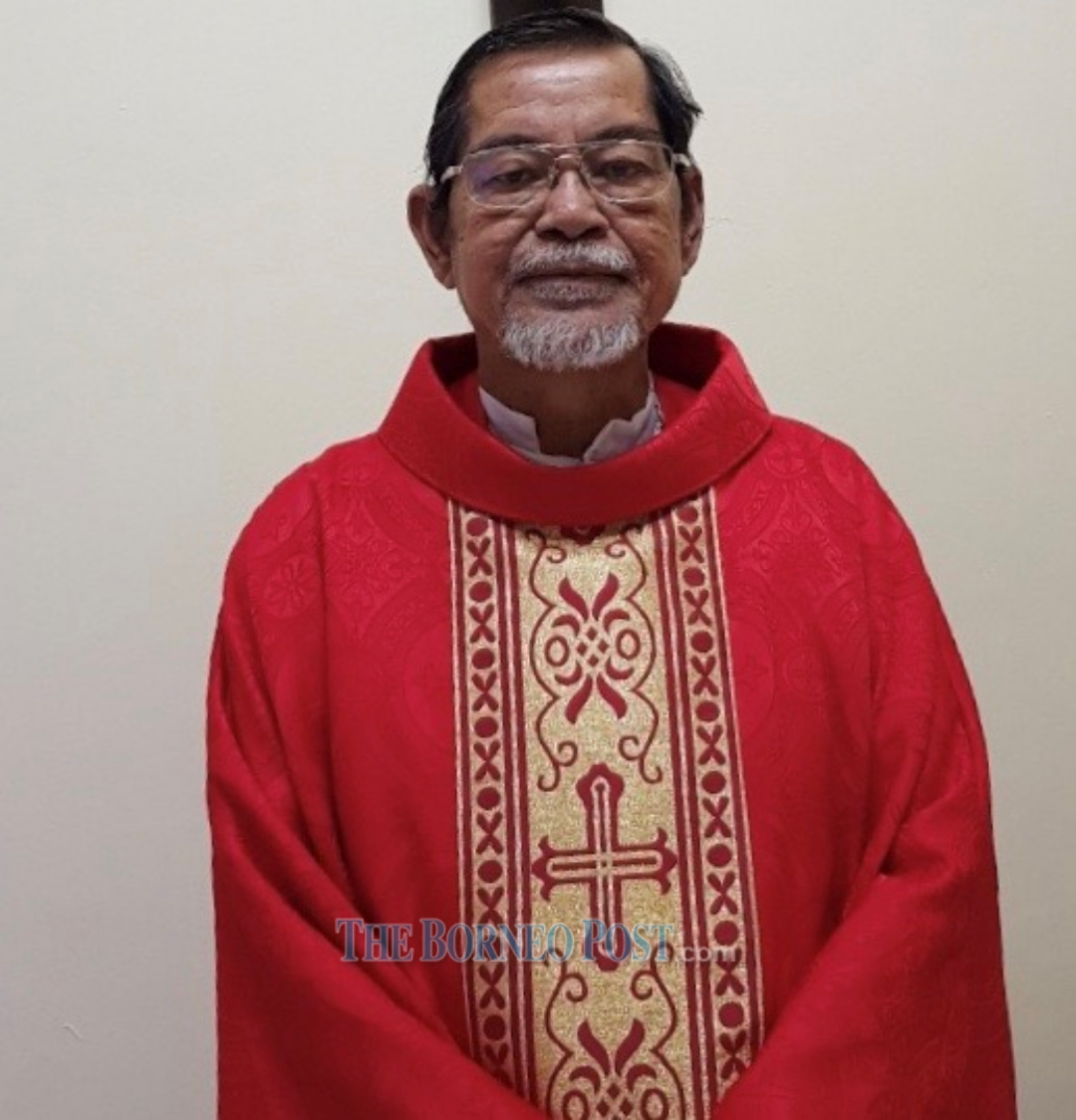 Michael Ngau, who hails from Long San, said Bishop Galvin at the time, had gone around Baram to ‘seek intelligent boys and prepare them for priesthood’.

“I was very fortunate that he came to Long San. When the Common Entrance Examination results came out, he selected us to join St Joseph in Miri.

“You can imagine that in those days, what it was like for an ‘ulu’ (interior) boy to come to town to study. If it were not for the Bishop, many of us might not have been able to attend secondary school education. May God bless his soul,” he said.

Michael Ngau and his mates regarded the seminary as their hostel.

They attended normal school, but were trained by the priests in matters of the faith.

“After Form 5, I was sent to Singapore, like the other boys.

“However, I did not continue on as I decided to join Batu Lintang Teachers College.

“Now I am retired, with four sons and 10 grandchildren.

“And I make sape; it’s my hobby,” said Michael Ngau.

Bishop Galvin had a soft spot for struggling, underprivileged students who were not old enough to start working. It was under this premise that he founded St Jude Private School to accommodate those who failed their Common Entrance and Sarawak Junior examinations.

He wisely included a few non-Catholic in the school management board, like the late Datuk Seri Haji Arni Lampam, the then-Resident of Miri Division.

Many boys and girls were taken into St Jude Private School, which also provided hostels for those coming from Baram and Limbang.

The school closed when Malaysia phased out certain public examinations to allow automatic promotion from primary education to secondary school level right up to Form 5.

Nonetheless, St Jude’s had produced good students who did very well, with some having gone overseas to further their studies and pursue promising careers.

Laman Mambang is one of them – back then, he came all the way from Limbang to obtain his Senior Cambridge Certificate and today, he is a master welder and trainer in Johor and Singapore. 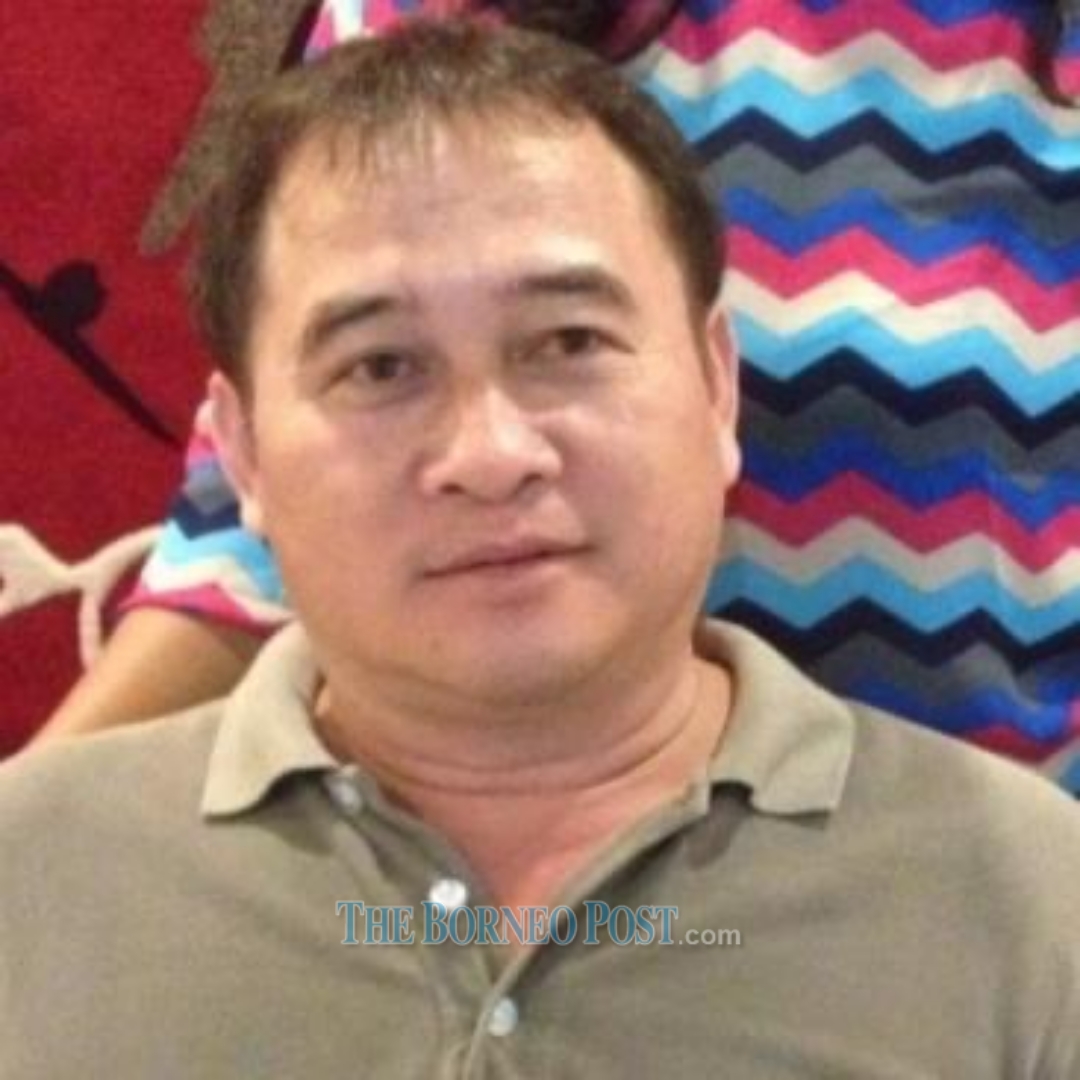 Laman, a Limbang boy who came to study at St Jude Private School.

The St Joseph’s School, Miri was founded by Rev-Fr Henry Jansen in 1932.

After the Second World War, there was demand for more places in schools, especially in English schools.

Bishop Galvin saw to it that the school be expanded through formulation of good policies with the other Mill Hill teacher-priests like Fr John Dekker.

The Bishop also initiated the building of Stella Maris Hall, which was open to everyone who needed a venue for social gatherings.

The hall later became a ‘happening place’ in those days.

Bishop Galvin had contributed to Sarawak Museum Journal from 1947 to 1956.

According to Fr Albert Jacobse of the Chapel of Mother Mary in Stutong, his interest in the Kenyah culture and language could have been ignited by his close contact with the students at Batu Lintang Teachers College.

Fr Jacobse remarked: “He went to great lengths to study the cultural, social, ritual and religious traditions of the Kenyahs. During the term holidays, Bishop Galvin would visit Baram, and meet up with his students’ families and friends there.

“He must have gone up to Baram three or four times during that period. It was very likely that during this time, he learned the Kenyah language.”

In 1964, Fr Jacobse was appointed to Long San, and he was touched by the warmth and kindness of the Bishop, who would come to visit him once or twice a year, bringing goodies from Miri.

When Fr Jacobse and other priests visited Bishop Galvin in Miri, the latter would always treat them to a good dinner.

“The Bishop was not a morning kind of person,” he said, adding that the Bishop would always open his doors to his Kenyah and Kayan friends even in the middle of the night.
“He would give them shelter and even personally bring them to the hospital to seek medical help. He was a good shepherd to his flock.”

Bishop Galvin had also compiled a hymnal that incorporated the Kenyah language, as well as its tunes and chants.

It is still being used nowadays – signifying a unique Sarawak heritage.

A book by Bishop Galvin, ‘On the Banks of the Baram’, remains a classic reference for students of anthropology.

He had also penned a book on Kenyah vocabulary, with help from Michael Kallang.

The Bishop’s other book, ‘Youth’, is about the importance of youth work in Sarawak.

Bishop Galvin brought in his niece to run the Long Loyang Clinic, which she had done for many years. She had trained many native girls to be nurses and midwives at a time when the infant mortality rate was high. People from far and near went to this clinic for many years.

In 1970, an incident involving him put Miri in international news.

On Nov 27 that year, Pope Paul VI visited Manila in the Philippines.

As the Pope strode along the red carpet greeting each of the bishops who stood in line, Bishop Galvin noticed a man holding a 10-inch knife.

One of the two papal security guards pushed the attacker towards Bishop Galvin, who being a fairly large man, was able to grab him tight.

“I stretched out my arms, folded them around the man and pulled him further backwards, while the security guards grabbed his hand and tugged him away,” the Bishop was quoted as having said.

Bishop Galvin was a priest for 32 years and one month, and a Bishop (of Miri) for 16 years and three months.

The Roman Catholic community would always remember him for his many contributions, including the one still standing – the beautiful Kenyah mural of the chapel on Tanjong Lobang Hill.