Saturday, December 3
You are at:Home»News»Sarawak»CM: Future of housing in S’wak must be environmentally sustainable, conducive to present, future generation 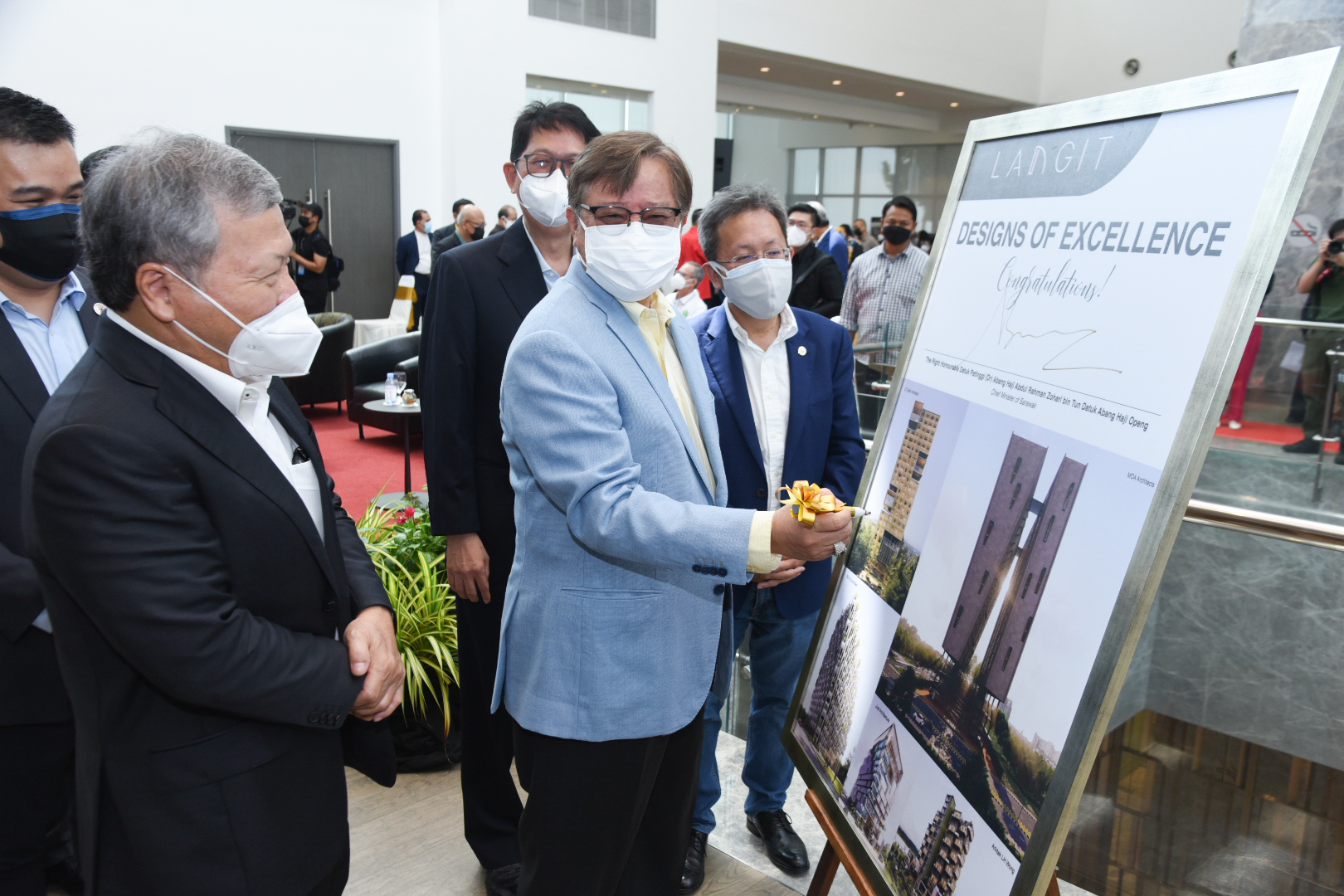 Abang Johari (center) signing on a board with the top five competition winners. Also seen were (from left) Yu and Dr Sim. — Photo courtesy of Penerangan.

KUCHING (Aug 7): The future of Sarawak housing must be conducive to the present and future generation with an emphasis on environmental sustainability, said Chief Minister Datuk Patinggi Abang Johari Tun Openg.

He said that considering the population growth and demographics from 2030 to 2050, there would be a lot of old people with an average lifespan of around 70 years old up to 80 or 90 years old.

As Sarawak community living is both upward and lateral, the community living must provide social services like nursing homes within the area so that old people can enjoy their life with social support in that community, he added.

“Secondly, green environment. There must be an area for recreation, surrounded by green area. Try to create new or particularly indigenous plants to be planted around the community,” he said today at the Langit Design Competition held at Hock Seng Lee (HSL) Tower on live telecast at HSL and Sarawak Public Communications Unit (Ukas) social media platforms.

Abang Johari said that as there are two housing segments, namely upwards and community living in terrace houses and bungalows, a community with both must be interconnected with social services because of the changing demographic in Sarawak’s population.

He added that Sarawak was fortunate to have big land mass but there had to be a balance between nature and what the state wants to develop.

“This means the state has ample space and must add value to the existing resources. When it comes to sustainability and environment, there is a cost to it. Number one, we must change the way we plan and number two, increase income level.

“Some people will say I am too ambitious but we have to have a certain target. We expect to inject the economy now to 2025 about RM63 billion; RM30 billion from public spending and RM33 billion from the private sector, including alternative funding,” he said.

Abang Johari added that there was also a need of infrastructure, including connectivity, to attract investors.

With this type of living available, foreigners and expatriats would be interested to come to Sarawak and work, he said, which would in turn increase purchasing power which would make the state’s economy be in a good state.

Abang Johari said that similarly, the state wants to create quality living for all sectors from both the high income and low income group in society.

Towards this end, the government is building affordable housing with basic infrastructure such as land filling, drainage and utilities borne by the government so that the low-income sector has access to quality living, he added.

“We hope that in town and suburb areas we can have a planned township where we can develop by embracing all of this and that’s when the architects have to come in, have a design and also have the right type of houses that can be sold for RM300,000 to RM500,000.

“If the state’s economy is good and wages increase, everybody will be able to afford quality housing, which in turn will increase the quality of living of the people,” Abang Johari said.

To achieve this, he said that leaders must put the people first instead of having a power struggle.

“What we need is stability — Thank God that Sarawak has a stable government. This is very important. You can give me all the building designs, very attractive designs, but if our country is unstable, I don’t think we can do it.

“One of the design (in the competition) has a unity design which embraces all communities and that is what we should do to build Sarawak,” he said.

The design competition was organised by Hock Seng Lee (HSL) in collaboration with Next Phase (NP), which is the landowner, and the Malaysian Institute of Architects Sarawak Chapter (PAMSC).

There were a total of 112 entries and the top five winners share the prize money totalling RM200,000.

Langit’s location is a compact but fantastically-located site along Jalan Tabuan, nestled in between Kuching’s historic core and establised commercial centres.

HSL-NP fully intends to build one of the winning entries.