Thursday, October 21
You are at:Home»News»Court»Recognition of PDA a term in settlement negotiation, Petronas ex-chairman tells court 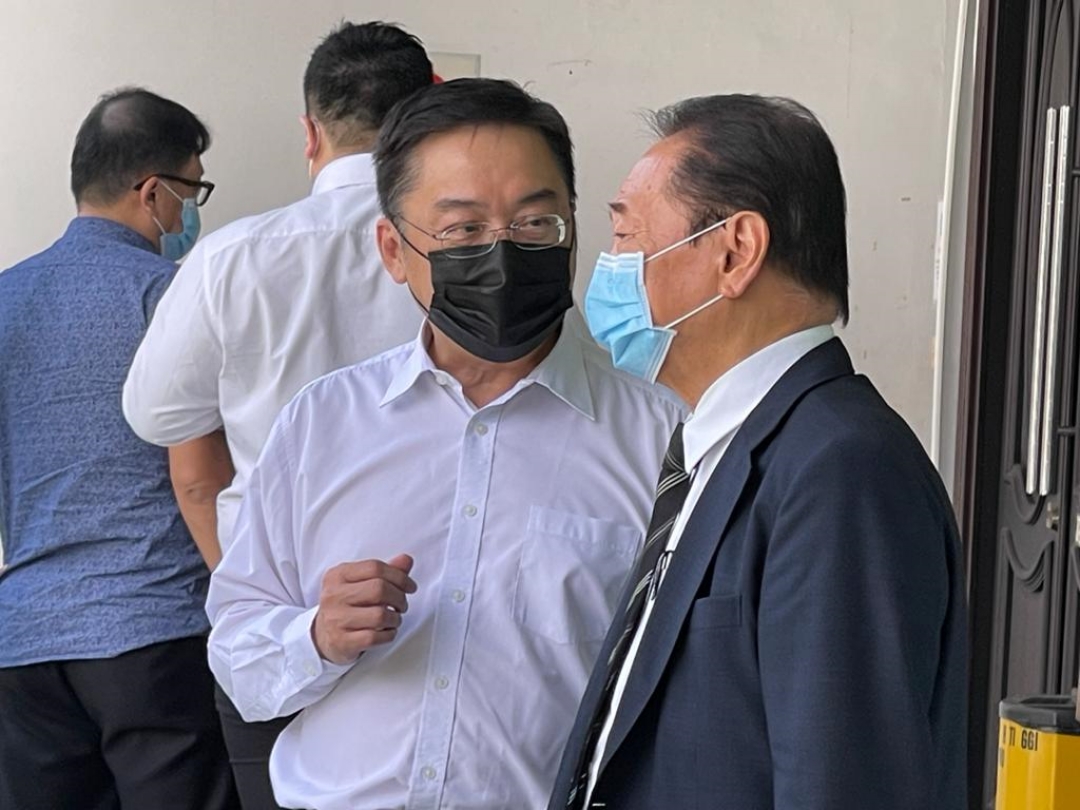 (From left) Lo and Wong Soon Koh discussing during the lunch break at court on Aug 6, 2021.

SIBU (Aug 7): Petroliam Nasional Berhad (Petronas) former chairman Tan Sri Ahmad Nizam Salleh told the High Court here that the recognition of Petroleum Development Act (PDA) 1974 by the Sarawak Government as stated in a joint statement on the State Sales Tax (SST) was one of the terms in the negotiation for settlement.

Ahmad Nizam confirmed this during the examination-in-chief by the defence counsel, Clement Wong, when testifying at the defamation suit brought against Parti Sarawak Bersatu (PSB) president Dato Sri Wong Soon Koh by the state government via Zoom yesterday.

He also told the court from his understanding of the statement, all the prior agreements that are already in place between the State of Sarawak and Petronas are still valid and that the PDA Act 1974 is also valid.

He also could not recall a legal action filed by Petronas to the Federal Court to determine the constitutionality of PDA as he was at the board level and not involved at the executive level.

When asked if he was aware of the vocal stand taken by the Sarawak Government in 2018 and 2019, whereby the chief minister said the PDA and Territorial Sea Act (TSA) were not relevant in Sarawak as the State Legislative Assembly (DUN) had yet to endorse them, Nizam said he was not fully aware.

He also told the court that he did not know the details of the outcome of the appeal by Petronas against the dismissal of a judicial review on March 13, 2020.

Clement: Do you agree with me that Petronas withdrew the appeal?

Nizam: It is part of the whole statement that we signed.

Clement: May I know why Petronas decided to withdraw the appeal?

Nizam: We, at the Board, are looking at the importance of the industry for the country and in that consideration, we are very concerned of the sustainability of the industry and the wellbeing of the people of course.

Clement: How would the withdrawal of the appeal affect the sustainability of the industry and the wellbeing of the people?

Nizam: The development of the oil and gas industry due to the court action by both sides was at a stalemate, so no new development could take place at that time. So the joint statement was made to facilitate all parties come back to the table and try to find a more amicable solution between the parties hence the withdrawal of the court cases on both sides which mean withdrawal by Petronas and also by the state.

He told the court that he was not aware whether Petronas commenced any other legal proceedings against the Sarawak Government in respect of the petroleum resources in Sarawak.

In the suit, the state government claims that Wong had defamed it in a statement issued on May 9 which questioned the settlement with Petronas on the state sales tax. It is suing Wong, who is also Bawang Assan assemblyman and a former state minister, for RM5 million.